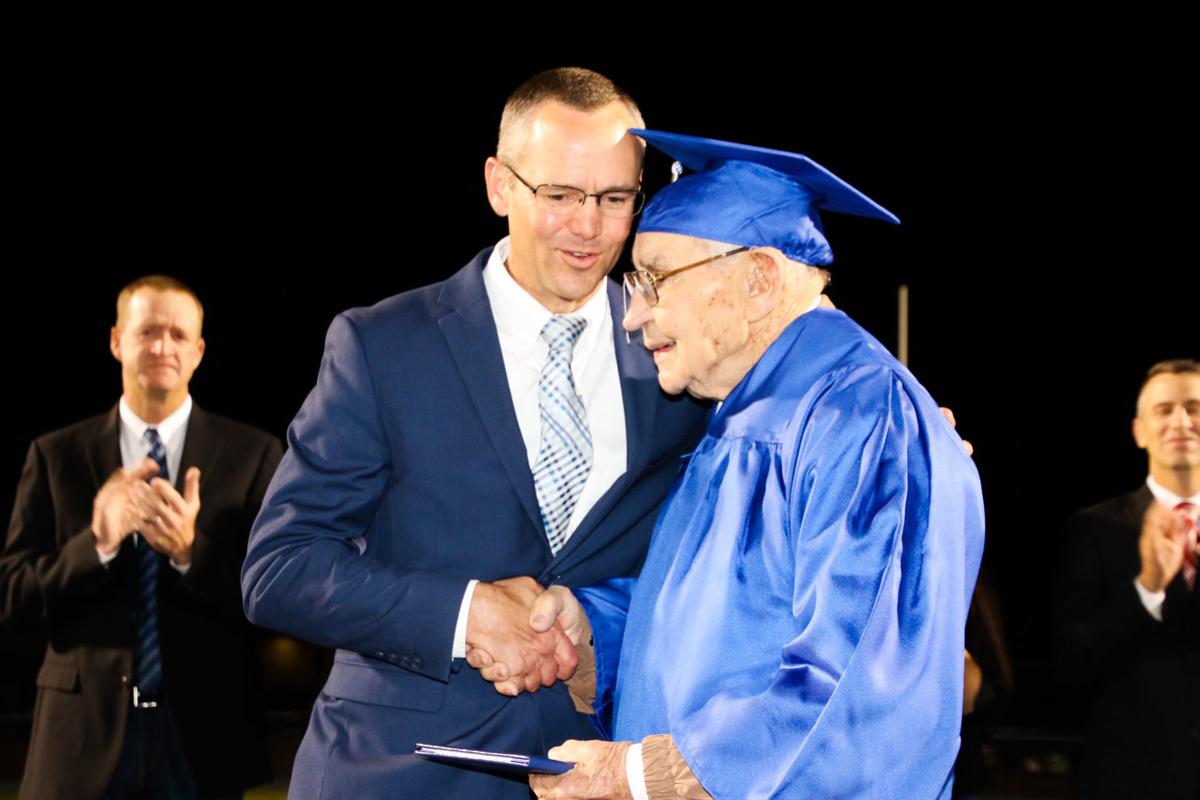 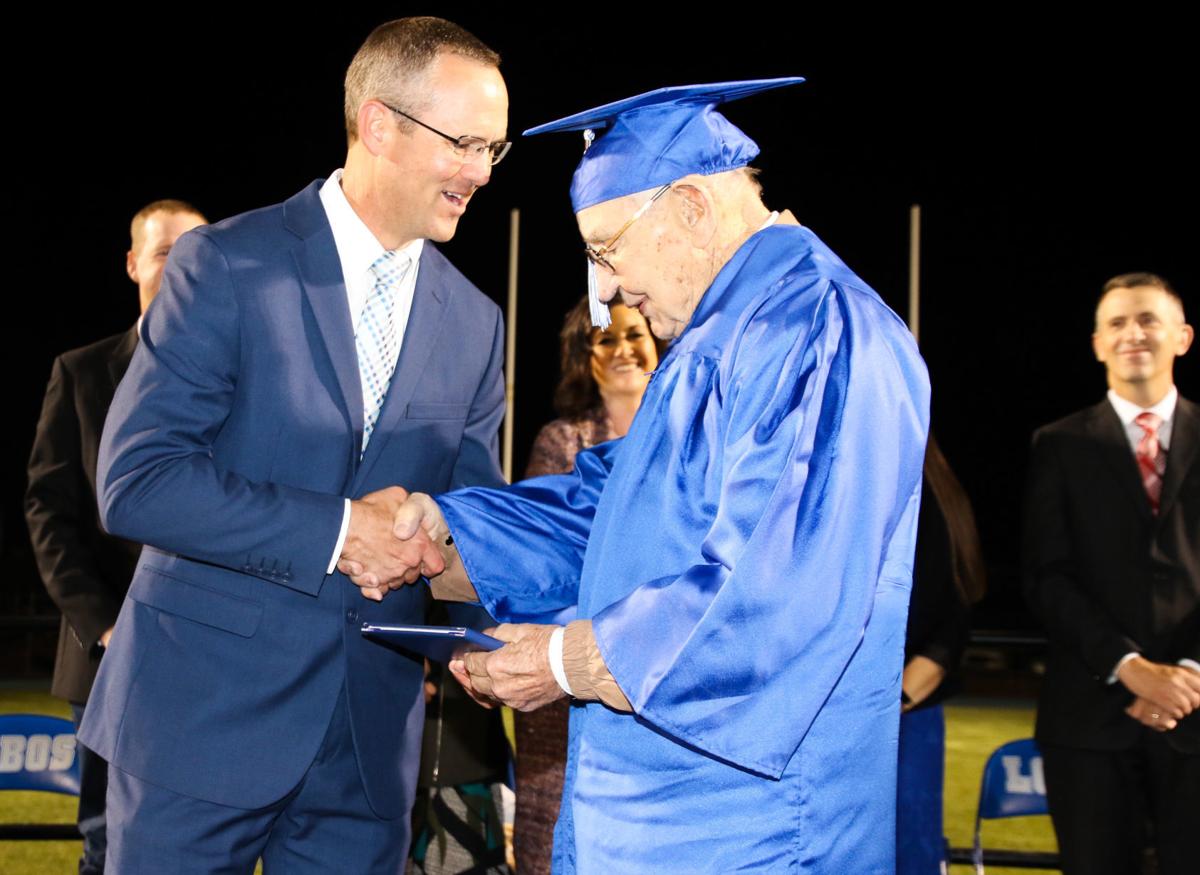 Hollis Merrell presented Charlie Hall, 95, with his diploma in May. Hall enlisted in the Marines to serve in World War II instead of finishing high school. 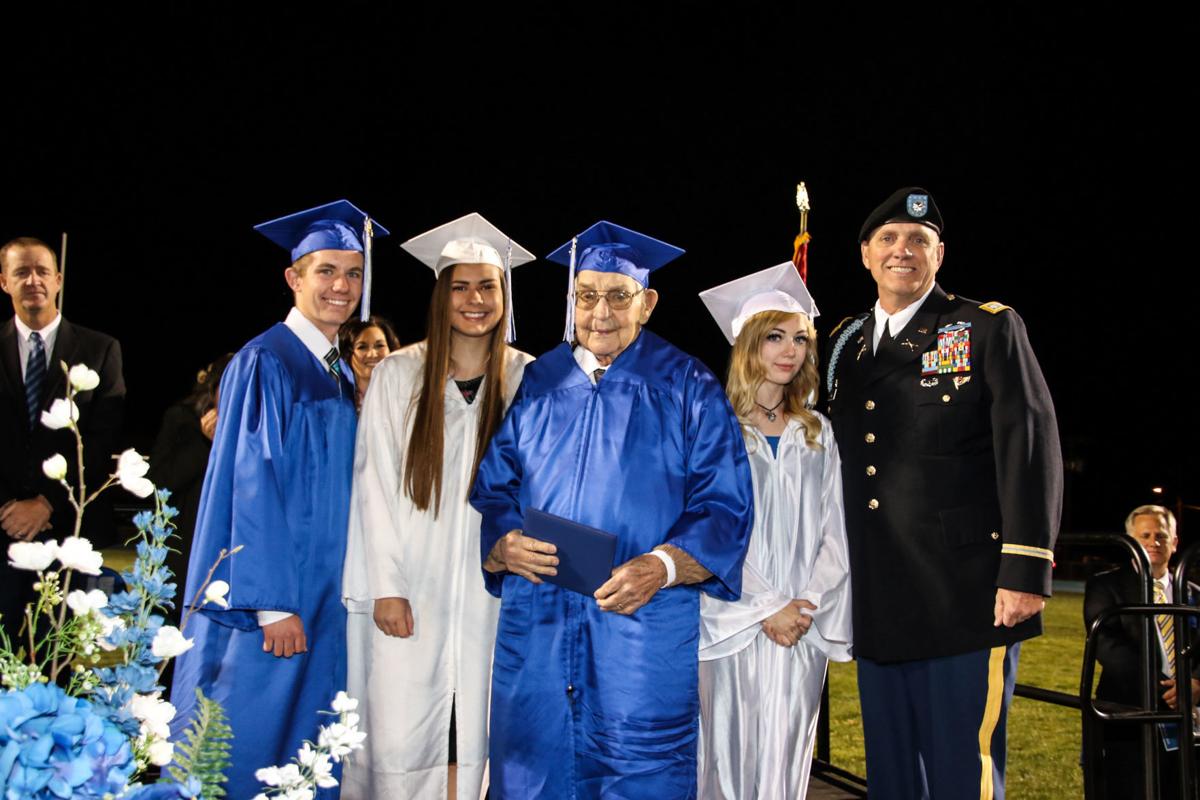 Graduating from Snowflake Union High School on May 24 alongside three of his great-grandchildren was Charles Logan Davis Hall, 95, of Taylor. From the left: Tyler Hall, Trinitee Flake, Charles “Charlie” Logan Davis Hall, Daiziah McCray, all escorted by Charlie’s son-in-law James Gill of Oklahoma.

Hollis Merrell presented Charlie Hall, 95, with his diploma in May. Hall enlisted in the Marines to serve in World War II instead of finishing high school.

Graduating from Snowflake Union High School on May 24 alongside three of his great-grandchildren was Charles Logan Davis Hall, 95, of Taylor. From the left: Tyler Hall, Trinitee Flake, Charles “Charlie” Logan Davis Hall, Daiziah McCray, all escorted by Charlie’s son-in-law James Gill of Oklahoma.

TAYLOR – Charles “Charlie” Logan Davis Hall of Taylor was already a success in many ways at 95 years of age.

But there was one thing missing – a high school diploma.

Charlie checked that off his list on Friday, May 24 when he received an Honorary High School Diploma from Snowflake Union High School.

Pulling up as close as possible to the graduation ramp in a four wheeler and escorted by three of his great grandchildren – Trinitee Flake, Daiziah McCray and Tyler Hall, also graduating from Snowflake High School — Charlie was presented his diploma by Superintendent Hollis Merrell and received a standing ovation from the crowd.

Charlie’s son-in-law, James Gill of Oklahoma, knew the importance of that diploma for Charlie. Gill said that Charlie had told him that one of the biggest regrets of his life was not graduating high school. He said that when he started seeing others getting theirs, he didn’t want anyone to know.

“I tried to make it work,” said Gill, “but being out of state I could not connect with Snowflake High School.”

Gill’s actions, however, did get the ball rolling and he made a connection to a former military officer who had served at Ft. Leavenworth with Arizona Rep. Walter “Walt” Blackman (LD 6). The officer reached out to Blackman, who had served 21 years in the Army himself, and Blackman made the necessary contacts with the school for the honorary diploma. “Walt did what I could not,” said Gill.

Charlie’s path was destined for success as evidenced by his leadership in his high school years at Snowflake. Principal Larry Titus told the crowd that Charlie had lettered in football, basketball and baseball his sophomore and junior years, and was president of the junior class.

Charlie worked summers and after school in the logging industry and he had two deferments from World War II due to his logging work and high school. But, like so many who loved their country, after Pearl Harbor he had to go and serve. He joined the U.S. Marine Corps on July 27, 1943. Gill said Charlie chose the Marines because he liked their dress blues.

Charlie served in the Pacific Theater as an Amphibian Tractor Operator for the 6th Marine Division, 9th Amphibian Tractor Battalion during the assault of Okinawa. His medals include the Presidential Unit Citation, the World War II Victory Medal, and the Marine Corps Reserve Service Medal.

Discharged from the Marine Corps in December 1945, Charlie came home to a family to care for, and went right to work. He went back to logging and he also worked for the railroad moving timber up to the sawmill in McNary. In his latter work years he had his own backhoe business and put in septic systems until 1977 or 1978 when he retired.

“His son was a builder on the reservation,” said Gill, “and he built the septic systems for him until eight or nine years ago.”

Brad Click, Veterans Memorial Day program coordinator for Taylor, said that Hall’s contributions did not end with the military, and for that he was one of six men awarded a Quilt of Valor on Saturday, May 25 at the Memorial Day program at the LDS Stake Center on Willow Lane. Rep. Blackman, a Bronze Star recipient, and the one responsible for Charlie getting his honorary diploma, was the keynote speaker at that event. Charlie’s foster son, Keith Hall, who served in Vietnam, also received a quilt. Quilts of Valor is a national volunteer organization whose mission is to “cover service members and veterans touched by war with comforting and healing quilts” made by its members.

Click also shared the information recited at the Memorial Day program about Charlie regarding ways he served the community after he returned from the war. He was on the Town of Taylor’s first council in 1966 and served in that capacity for seven years; he served as a member of the Snowflake Unified School District Board; served ten and a half years in Taylor’s First Ward Bishopric with four of those years as bishop in the Church of Jesus Christ of Latter-day Saints; he was elected to the Taylor Hall of Fame in 1994; was the Snowflake-Taylor Chamber of Commerce’s Man of the Year in 1998, and for his devotion and service to the Boy Scouts and the youth of his church, was awarded their Distinguished Leadership Citation.

Gill said that Blackman will introduce legislation next term for Operation Recognition, a program already in place in the states of Kansas and Washington for veterans who left high school to join the military during WWII, Korea, or Vietnam.

For Charlie Hall, it was truly a Memorial Day weekend with back-to-back awards – his high school diploma and as a bonus, the special honor of a quilt from Quilts of Valor.