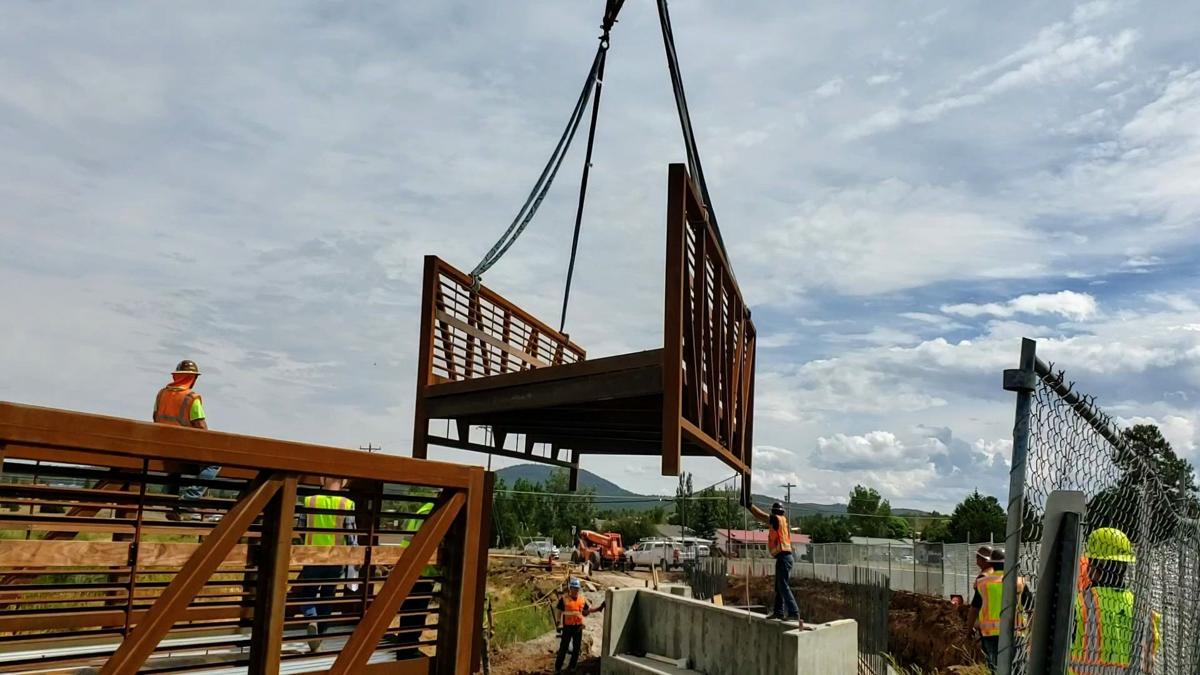 Lowering the final 42-foot section of the Billy Creek Pedestrian Bridge into place on Porter Mountain Road on July 23, Rawlings Construction brought in one of the largest cranes that can be driven to a job site. The steel bridge arrived in three sections, two of which had to be bolted together before installation. 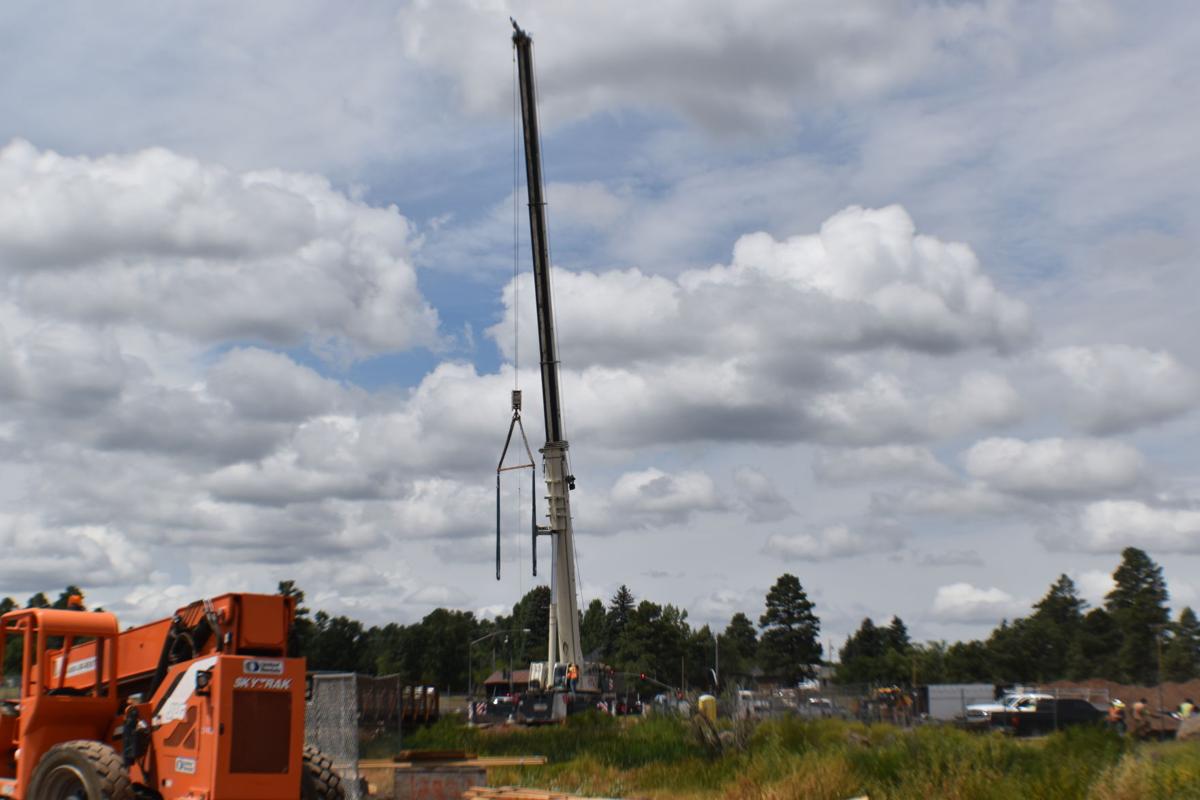 Transported to Lakeside from Albuquerque, this 300-ton crane did the job expected of it on Thursday, July 23 by lifting and placing the steel bridge sections in place for the Billy Creek Pedestrian Bridge on Porter Mountain Road. PTLS Public Works Director Matt Patterson says completion of the project is expected in the fall.

PINETOP-LAKESIDE — It was quite the spectacle.

Even though Porter Mountain Road was not closed on Thursday, July 23, passersby between 7:30 a.m. to 11 a.m. likely noticed huge steel structures dangling in mid-air and being turned, secured by the cables of a 300-ton crane, as the new Billy Creek Pedestrian Bridge was placed alongside the existing highway bridge.

After many years in the making, a partnership between Navajo County, Blue Ridge School District and the Town of Pinetop-Lakeside finally can see an end in sight to protecting pedestrians who have had to cross the 1970 bridge which barely accommodates two lanes of traffic.

Last October Rawlings Specialty Contracting, the only bid for the project, was awarded the contract for the bridge in the amount of $1.266 million. Waiting on the notice to proceed, Public Works Director Matt Patterson anticipated at that time the project would be completed within 360 days.

The 300-ton crane used to put the steel bridge in place is one of the largest that can be brought to a job site by semi trucks. The one used for this project came from Albuquerque.

After Thursday’s installation of the 12-foot wide, 164-foot long steel bridge comprised of three sections — two of which had to be bolted together for a total of 122 feet before they were installed — along with the final section of 42 feet, Patterson says the bridge project is due to be completed this fall.

The safety of the Billy Creek Bridge has been identified as a critical issue more than once. As far back as 2007, the town said it was inadequate to handle future growth as well as presenting a “clear and present danger to school children who must share the bridge with an ever increasing number of vehicles.”

“The need for the pedestrian bridge became more apparent when the Town of Pinetop-Lakeside, in coordination with the Blue Ridge School District, built the walk/bike path along Porter Mountain Road to allow students a safer route walking and/or biking to and from school,” he added.

The Arizona Department of Transportation (ADOT) had spent a number of years and several hundred thousand dollars doing environmental studies to protect Billy Creek, along with the engineering design for this unique pedestrian structure.

The bridge issue was on the November 2018 council agenda but Patterson had learned there was a possibility that ADOT could feasibly make a Highway User Revenue Fund (HURF) exchange for funding which would allow Pinetop-Lakeside to be in charge of the project instead of ADOT, so he asked that it be tabled. The request was made and ADOT approved the exchange and on Sept. 11, 2019 the town issued the invitation to bid.

The town had received an extra $197,000 from ADOT’s General Fund last August when ADOT distributed $18 million across the board to Arizona cities and towns.

Billy Creek was placed on the agenda in October and the council unanimously agreed to merge the extra money with the funds in their HURF budget, and to proceed with the bridge so the long-standing project could finally be realized.

Patterson also noted at that October council meeting that if the town had not agreed to move forward with the project, they would have been responsible for paying back the cost of design which was $500,000 to $600,000.

A unique point about the new Billy Creek rustic bridge is that it is graffiti proof.

One of the on site project workers said if someone were to place graffiti on the bridge, as has happened in many places, with the use of a wire brush, followed by water, the steel bridge returns to its original state.