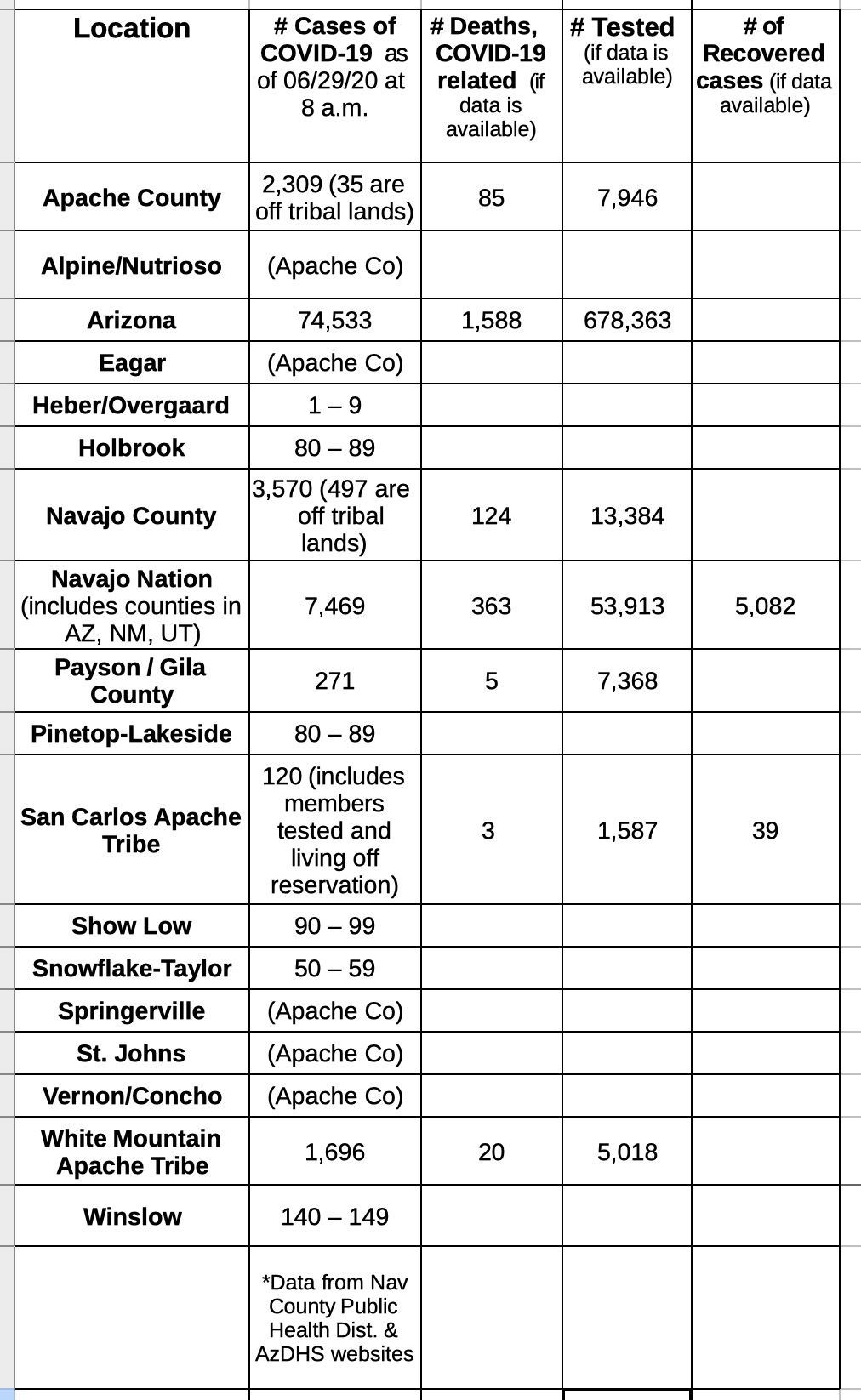 ARIZONA — The Arizona Department of Health Services (AzDHS) reported more than 3,600 confirmed COVID-19 cases on Sunday, June 28. This is another record-breaking day for the number of daily cases since the pandemic began.

The Navajo Nation follows with 312 new cases last week, however the reservation's total number of cases was 7,469 on Monday which is near double that of Navajo County.  The good news is that the continued stay-at-home order, weekend lock downs and travel limitations outside the reservation may be helping slow the spread on the Navajo Nation.

The White Mountain Apache Tribe reports an increase of 200 cases last week (1,496 increased to 1,696). They have also implemented a stay-at-home order for their residents and a 57-hour weekend lockdown like the Navajo Nation.

Summit Healthcare Regional Medical Center, as of Thursday, June 24 reported a total of 200 cases of COVID-19 in their system which includes multiple locations in the White Mountains.

As of Monday, June 29 only Payson, Pinetop-Lakeside, Winslow, the Navajo Nation and the White Mountain Apache Tribe have mandated that masks or face coverings be worn in public.

The city of Show Low will held a special meeting on Monday to consider an emergency proclamation requiring face coverings in public. The outcome of this meeting was not available at press time.

This is just not true. On June 28th, the number of new cases reported was 231. That is straight from the AZ DHS website. Furthermore, the hospitalization rate and fatality rate has gone down steadily since the middle of June. Yes, the middle of June was bad. The highest number of cases reported was on June 22nd, 3,902 cases. Since then, the numbers (not ICU beds or ventilator usage) has gone down.

Of course its not true, but it's the democratic mainstream media's way of keeping the false fear alive until the election, Their dream is to make mail in voting the only way to vote, so they can manipulate the ballots. This whole Planned Demic is all about the election and very little to do about a new virus that has a 99.9% survival rate. Resist, you are being played, and being prepared for mandatory vaccines, that will have a tracer in it so you'll be allowed to buy and sell, and located at all times. Thats why your being conditioned to stay 6 ft apart, facial recognition doesn't work if you're too close to too many people. Masks are just the beginning, and only needed by the sick, just like normal...WAKE UP PEOPLE

WOW! Snotamer's post is a perfect example of an uninformed, delusional, republican extremists Trump follower post. He blames the media of spreading lies even though the republican Trump adminstration, the CDC, the FDA, the HHS, and the Trump appointed Pamdemic Panel all have issued mask and distancing policys to combat the Corona virus. If one were to believe Snotamer, then republicans Trump,his administration, republican Senators, and Representatives are all doing the wishes of the Democrats. What is very transparent is that Snotamer is adovcating the same republican Trump idea that the American people voting by mail in ballots should not be allowed, That if they really want to vote, they have to risk getting infected and or death. That is voter suppression. Ironically, the leader of the republican extrermists Trump, votes by mail in ballot.

ArizAl: [thumbup] You got it - they're completely delusional. (Delusion: an idiosyncratic belief or impression that is firmly maintained despite being contradicted by what is generally accepted as reality or rational argument, typically a symptom of mental disorder.) [thumbup]

"Fake News," huh? Ignore it at your own peril. Unfortunately, your ignore-ance is at others' peril as well.

"The number of coronavirus infections in the United States swelled enormously last month as states tried to relax quarantine rules and reopen their economies. More than 800,000 new cases were reported in June — led by Florida, Arizona, Texas and California — bringing the nation’s officially reported total to approximately 2.6 million."

The simple reason the cases reportedly increased is because of the "leaders" allowing protesting. Fact. This is proven by the statistics of age now being infected. So here's the deal, you allowed it, you and the politicians created the second wave as they call it, and now you got it. Looks like your protesting chickens have come home to roost. Dont like it, call your politicians and complain.

Unless the television cameras of all media, even Fox News, are rigged, almost all protesters of police brutality were wearing masks. Quite the opposite of the main Super Spreaders republicans Trump, Ducey and their extremist republican supporters who packed shoulder to shoulder, without masks in a Phoenix church and in Tulsa, OK. Even today, the Grand champeen national Super Spreader is from the very begining, the Fascist republican who proclaimed time and time again in Jan.thru March that the Covid-19 virus was a hoax and it would be gone as if by magic. Since the time Trump made those predictions, over one hundred and twenty five thousand americans have died of his inaction and stupid uninformed statements.

Th number of new cases is great news! This means we are getting closer to having a herd immunity! The one thing all of you panicky Patties are not mentioning is the 99.1% survival rate this virus has. No, you want to continue to spread the fear like this is some "walking dead" world ending pandemic when it's not. Are people going to still die from this? Well yes, but if you think hiding away from it is going to solve anything then I suggest you hide under your bed with your mask on and let the rest of us get on with our lives.

Im still trying real hard to figure out where AzAl gets Facism from the Republicans.

Fascism (/ˈfæʃɪzəm/) is a form of far-right, authoritarian,characterized by dictatorial power, forcible suppression of opposition, strong regimentation of society

Ok...Far right? OK by the far lefts standards I guess so. Authoritarian? When where and how I ask. Forcible suppression to opposition? Ahhh..OK. I that kinda like controlling 95% of the media, burying every story that dont fit a one sided agenda, Telling everyone your the party of love and acceptance and then censoring everything somebody else with a differing opinion? Yeah ok. Strong regimentation of society. Errrr...like socialism, endless laws and control, um stuff like that? yep pretty much nails the democrats Modus Operandi to the T.