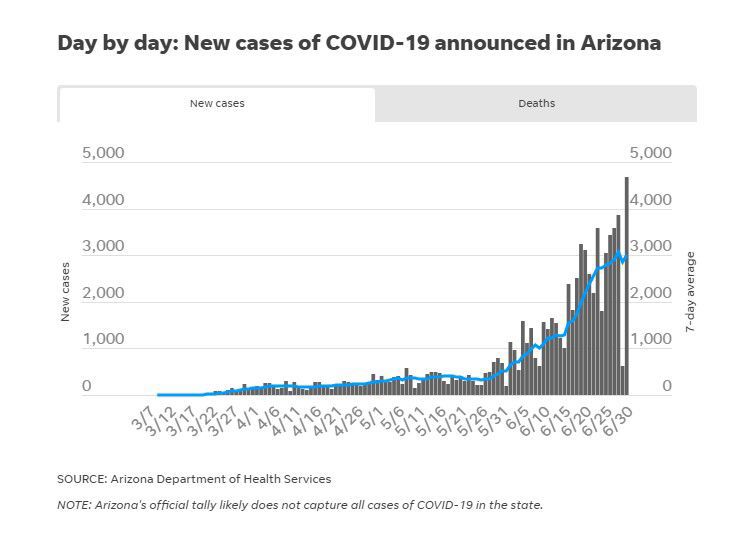 ARIZONA — Faced with the nation’s fastest rate of increase in new cases of COVID 19, Arizona Gov. Doug Ducey once again ordered some businesses closed and urged people to stay home as much as possible and wear masks in public when they can’t.

The governor’s order will require businesses like bars, gyms, water parks, movie theaters and tubing to stop for the next month. The order also placed limits on gatherings, although counties, towns and businesses can seek exceptions to the order.

Towns and counties can require people to wear masks in public and can also approve events and gatherings likely to draw more than 50 people.

The governor’s order on Monday also delayed the start of school until at least August 17 and activated a “surge” of hospital beds to cope with the relentlessly rising number of cases and hospitalizations. This allows hospitals to triage life-saving care based on the odds someone will survive in the event they run out of beds or resources.

In mid-week Arizona had almost 80,000 diagnosed cases and more than 1,632 deaths, after setting daily records for new cases almost every day for a week.

The order requires anyone holding an event to fill out an Arizona Department of Health Service form that explains how he or she will comply with COVID-19 business operations. Towns and counties must also submit paperwork to allow events.

The governor has given towns the authority to shut down any organization, entity or event that does not fill out the required paperwork. This order will remain in effect until July 27, at which time Ducey will consider repeal or revision of the order every two weeks depending on the situation.

“Over the past several weeks, I have been asked repeatedly what the Town of Eagar plans to do about COVID-19, masks, visitors, riots, etc. It is somewhat alarming how many expect and almost invite an infringement on their freedoms. My response from the onset of COVID-19 pandemic has been that we will err on the side of freedom.”

He insisted the government doesn’t have the authority to make people wear masks, but urged people to stay home if they feel sick and wear masks and gloves if they’re afraid of an infection. “These precautions do not harm me and I will not judge you adversely for doing what you feel is best for you. But don’t ask that the government require it of healthy, law-abiding citizens.”

Studies show that about 40 percent of people infected by the virus never develop obvious symptoms. Even those who do develop symptoms like a cough or fever may spread the virus most effectively in the day or two before symptoms develop. Wearing masks dramatically reduces the chance that these asymptomatic or pre-symptomatic people will unknowingly spread the infection. Countries that practiced widespread use of masks as well as limiting crowds had a much lower rate of infection and contained the virus much more effectively than the US, which with 2.6 million confirmed cases accounts for about a quarter of the known infections worldwide. Europe and other countries require travelers from the US to quarantine for two weeks due to the prevalence of the virus here.

Hamblin did not deny the existence of the virus or its effects, but said the pandemic has been “politicized.”

“Never before has our government been more eager and willing to take away freedoms from the citizenry. Never before has the citizenry been more willing to give them up. Take charge of your own life. Nobody owes you anything. The government has never been more ill-equipped to solve your problems nor is it its function to do so. This is America. Stand up and be somebody. Be brave and live free,” Hamblin said in a written statement.

Navajo and Apache counties remain the epicenter of the pandemic in Arizona. Navajo County has suffered 125 deaths, or 112 deaths per 100,000 population. Apache County has suffered 85 deaths or 118 per 100,000. That’s one of the worst outbreaks in the country and a death rate about five times higher than the statewide average.

The Arizona Department of Health Services Director this week also told hospitals to activate “crisis care standards” to ration resources as state hospital beds and intensive care units are nearing capacity. Those standards allow hospitals to triage care, for instance saving ventilators for ICU beds for younger patients with a better chance of survival. The emergency standards may help protect hospitals from legal liability for triaging patients based on the person’s odds of survival, complicating illness and other factors.

Gov. Ducey acted after a letter signed by more than 1,000 healthcare providers urged him to adopt the “crisis care standards” and reinstate his “stay-at-home” order to prevent hospitals from getting overwhelmed. The doctors also urged the state to increase testing further and undertake contract tracing to reach people who have been exposed.

Several hospitals have already activated “surge” plans, equipping and staffing extra beds and bringing in nurses from other places to avoid overwhelming ICU rooms. The addition of these surge beds this week offered a little breathing room, but the steep rise in new cases diagnosed daily continues.

Hospitals have said they intend to share resources and beds so that individual hospitals won’t hit the threshold until almost all the hospitals run out of space. That may prove more difficult to manage in rural areas, with only a few hospitals and more difficulty in transferring patients to urban areas, with far more beds per capita.

Disability advocacy groups quickly responded with concerns the standards could lead to discrimination against people with disabilities when it comes to allocating life-saving care.

Your article is a classic example of why people don’t know what to believe. Let’s break this down. Your first chart seems to indicate almost 5,000 new cases announced in Arizona on the 30th. Yet, you go to the AZ DHS website (link below) and click on Confirmed COVID-19 Cases by Day, that chart is showing 1,342 cases for June 30th. That is a huge disparity. Your second chart (New reported cases by day in Arizona) is not legible.

Your 3rd chart (New reported deaths by day in Arizona) has an incredibly misleading trendline that seems to indicate the number of deaths at the end of June is in the 30+ range. However, if you go to the AZ DHS website and click on COVID-19 Deaths, their chart shows 11 on the 29th and 18 on the 30th. That is a considerable difference than the trendline.

People don’t know what to believe anymore because of conflicting information and your article sadly contributes more to confusion than it does to clear up the confusion. Confirmed COVID cases have been coming down from a peak around June 22nd, which is good, but not good enough. However, the bright spot is hospitalizations and fatalities have come down. Unfortunately, ICU bed use and ventilator use has gone up since the beginning of March.

Data is a powerful tool and unfortunately it is frequently used in the wrong way.

Look at the graphs people, we are in deep yoghurt here in the land of AZ. Super Cool is what we need to be here and now folks.