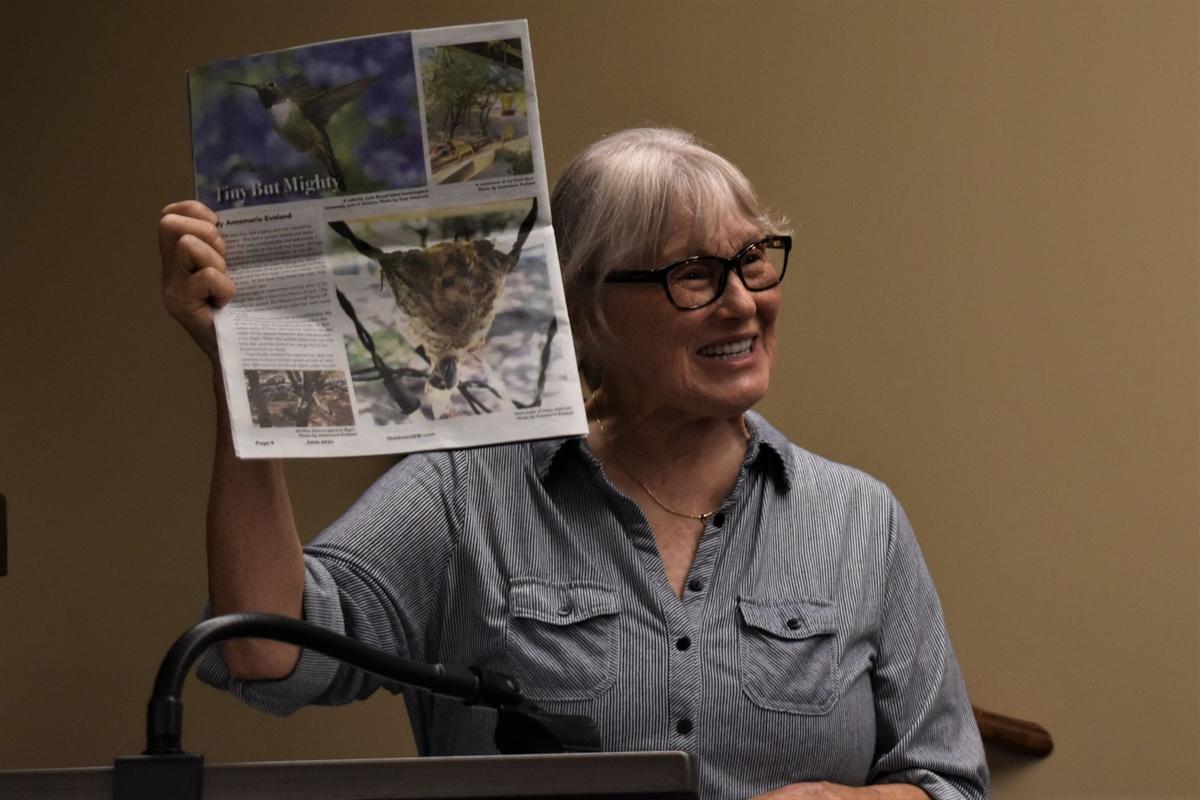 Promoting what she is passionate about, Audubon President Mary Williams addresses a group of birding enthusiasts at the June “Birding the White Mountains,” the second of a five-part series about the many species of birds found in Navajo and Apache Counties. 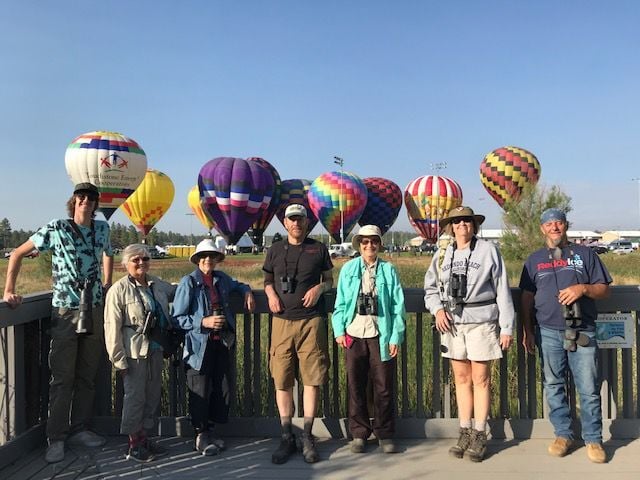 Following the Friday night “Birding the White Mountains” series — held the last Friday of each month through September — birders meet the following morning for a field trip. June’s trip was held while the Balloon Festival was going on, but it did not interfere. Pictured from left, John, Jan, Hinde, Ron, Judy, Susie and Ken sighted 30 different species at the wetland viewing platform at the WMNC.

Promoting what she is passionate about, Audubon President Mary Williams addresses a group of birding enthusiasts at the June “Birding the White Mountains,” the second of a five-part series about the many species of birds found in Navajo and Apache Counties.

Following the Friday night “Birding the White Mountains” series — held the last Friday of each month through September — birders meet the following morning for a field trip. June’s trip was held while the Balloon Festival was going on, but it did not interfere. Pictured from left, John, Jan, Hinde, Ron, Judy, Susie and Ken sighted 30 different species at the wetland viewing platform at the WMNC.

PINETOP-LAKESIDE — For a quarter of a century Mary Ellen Bittorf was president of the White Mountain Audubon Society (WMAS). If someone spoke of birding, her name always came up. In 2019 she decided it was time to pass the gavel, but where would the club find someone as knowledgeable and enthusiastic about birds as Bittorf? Well, they didn’t have to use their binoculars to look far — Mary Williams, an avid birder and board member, was remotely elected during the COVID-19 pandemic as the new president.

Williams grew up in Wisconsin where, way before she found her way to Arizona, derived enjoyment from “feeding and finding birds.”

She obtained her masters in administrative leadership with a focus on adult education from the University of Wisconsin and worked for a large corporation in marketing/public relations which allowed her to travel throughout the country. She served as an adjunct professor at a community college while living in Florida and at Southwestern College, now Arizona Christian University, after relocating to the Phoenix area in 2002.

Though her degree was not in ornithology, it was certainly a hobby she could participate in wherever she went. Ten years ago she started a birding club at the resort where she and her husband RVed in East Mesa. She organized and led field trips in the Phoenix Valley and in the Green Valley, Patagonia and Sierra Vista areas.

For the last 15 years the Williams have been active RVers at Juniper Ridge, between Show Low and Taylor. Last winter they decided they would try a park model instead and found it to their liking.

Williams had already immersed herself into the Mountain’s birding community during those RVing days. She became a volunteer and coordinator for the Navajo County Global Big Days (formerly the Northpast Navajo C American Migratory Bird Count) and recently assumed the Navajo compiler role for the nation’s longest-running community science bird project — the Audubon Society’s Christmas Bird Count. She has been an active eBirder who has been in the Cornell Lab of Ornithology’s past annual listings of Top 50 eBirders in AZ and Top 25 in Maricopa County. She now maintains her status among the Top 10 eBirders in Navajo and Apache Counties.

Now that events have opened up again, Williams put together a five-part series called “Birding the White Mountains” which began in May and will continue through September. The series is held on the last Friday of the month at 6:30 p.m. at the Town of Pinetop-Lakeside’s council chambers. Each one of the series is followed by bird walks the next morning at 6:30 a.m. to different locations.

The June meeting was facilitated by Williams herself and it was on hummingbirds, a favorite subject of many. The surprise came in learning just how many varieties of these tiny birds there are in the White Mountains.

The next morning, although the Balloon Festival was going on, a group of seven joined Williams at the WMNC, led by board member Ron Miller, for the field trip. They were only able to walk a .8 mile loop to the entry of the Big Springs at the amphitheater due to the forest closure but could still see some species on the pond. The group was elated because they actually sighted 30 different species on that walk.

The next series talk will be on July 30 with a bird walk on July 31.

The general monthly membership meeting is also held at the council chambers at 6:30 p.m. on the first Wednesday of each month. Each meeting has a guest speaker and everyone is welcomed. A person does not have to know anything about birds to come, but they will certainly learn something about them.

The next membership meeting will be Aug. 4. John Wilson, a college freshman from Taylor who plans to become an ornithologist, and is the No. 1 eBirder for 2020 and leads as No. 1 so far this year in Navajo County, will speak about the Eagle Watch Program.

The Sept. 1 meeting will feature Lorna McNeill-Cox from the Forest Service who will talk about the weird and wonderful wildlife of Fool Hollow and the local area.

Local filmmaker and author Barb Davis will deliver one of her feature films on Oct. 7. Arizona Game & Fish Department’s Dan Groebner will talk about bird calls on Nov. 3.

The final meeting of the year, Dec. 1, will be the membership election and party, and will feature a power point presentation by Sue Sitko, former Northern Arizona Nature Conservancy manager on her trip to the Texas Birding Coast.

“I am honored and happy to serve a small and growing local chapter of the National Audubon Society — a 116-year-old organization involved in the study of birds and in conserving and restoring the natural ecosystems they need. There are alarming reports of massive declines in bird species’ populations and about diseases and die-offs. We need to remember the old cliche of ‘the canary in the coal mine,’ identify contributing factors, and work to improve the environment for our own health as well as that of birds. As the new WMAS President, I’m grateful for the work of past officers and directors, especially our former President, MaryEllen Bittorf, who launched our chapter in the 1970s,” said Williams, who is certainly knowledgeable about birding and definitely more than qualified to be president of ASWM.

Aren't these the same bird people that got a helicopter business, which employed over 60 people, to relocate to another state because they flew a completed aircraft out once a week?

Russ : the moment that I read the title to this article I knew that you would not be able to resist taking a swipe at us birdy folks . You did not disappoint , ol' chum . I will again reiterate , as I did a few years ago , that the business in question was entirely incompatible and at odds with the contiguous nature preserve and the harmonious environs generally associated with the surrounding residential neighborhoods and park lands . Such a business should have never been allowed there in the first place , and should rather have been situated out near an airport or some such location with ample open space and similar industry . The safety issues associated with this type of business also would suggest the same .

FYI ; Many . many years ago I worked in avionics at a heliport on the Hudson River in Weehawken , New Jersey . All of out test flights and operational checks took place over the wide expanses of the Hudson River , or out over the bay for safety reasons , with the exception of calibrations performed on a compass rose .

Get over it , Russ . And , if I might suggest ; get yourself a good pair of optics ( I prefer Steiner binoculars ) , an Arizona Bird Field Guide and a notebook , then take to the woods and wetlands and expand your mind and spirit . It'll do you a world of good .

Thanks to ‘che guevara’ for clarifying the problem ‘Russ’ posted. Happened long before I moved to this beautiful area. Mary Williams

so I was right