WHITE MOUNTAINS — Navajo and Apache counties have among the highest COVID-19 infection rates in the country, according to the results of an innovative new Facebook survey.

Some 2 million people in the US responded to the survey by reporting any symptoms they were experiencing. The researchers used those responses to estimate the percentage of people in each county nationwide had symptoms of COVID-19 or the flu as of April 12.

The Navajo Nation has 1,206 cases and 48 deaths in Arizona and New Mexico. 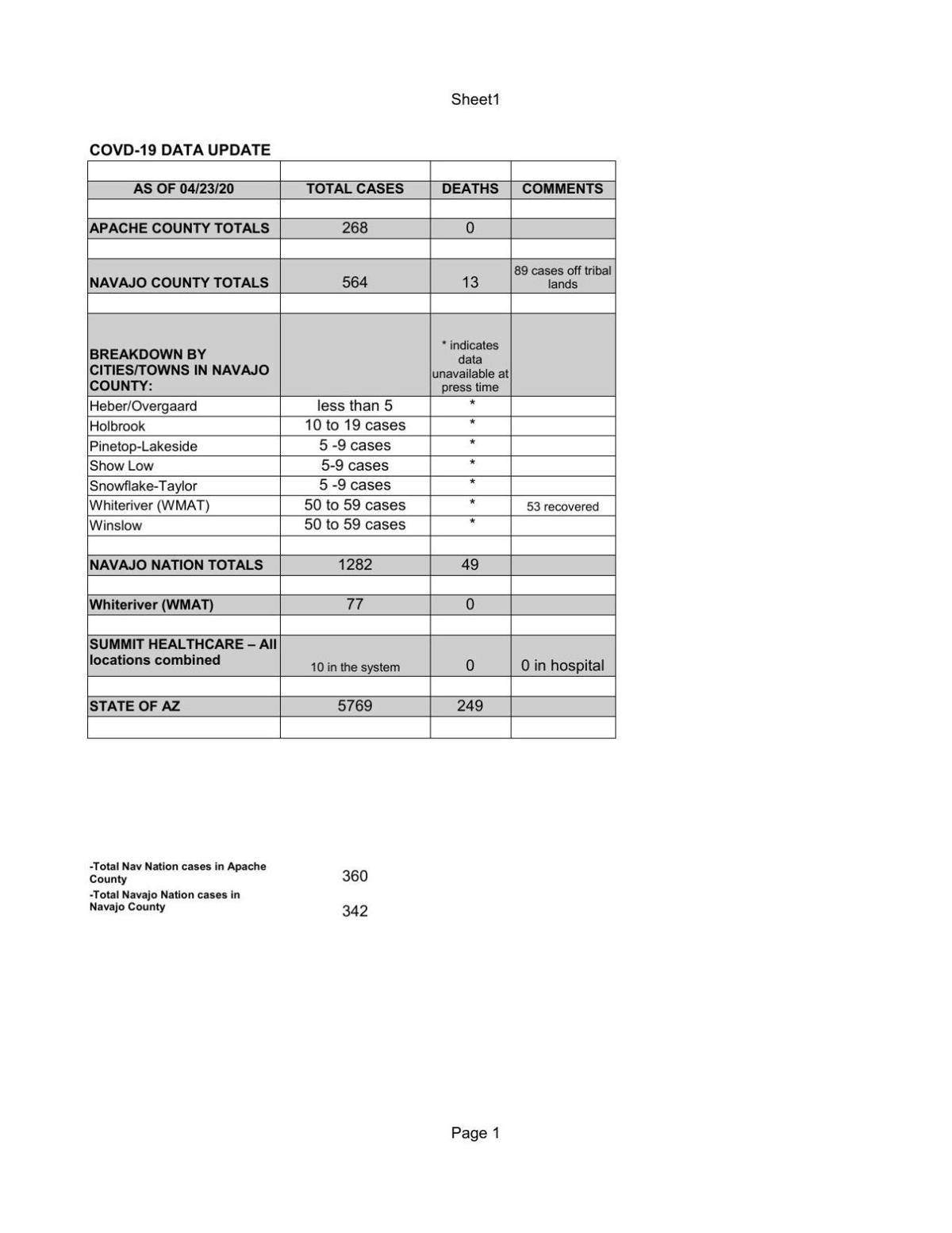 But Gila County was something of a surprise. With 1.33 percent reporting symptoms. Gila County has just 10 cases and no deaths, which works out to 18.7 confirmed infections per 100,000 population.

However, the Facebook survey shows Gila County with a much higher underlying rate of infection than Maricopa County, with an infection rate of about 0.8 percent.

Only four other counties had a higher infection rate than Gila County – Cochise with 1.78 and Santa Cruz with 1.95 percent plus Navajo and Apache counties.

The estimates are based on self-reported symptoms, not actual tests confirming a COVID-19 infections. So they offer just a ballpark estimate. The survey had a limited ability to correct for things like age and gender, to make sure the sample reflects the demographics of the overall population.

The survey represents an attempt to tackle one of the most vexing questions about the pandemic — how many people get infected but never show up in the official statistics? Determining the total infection rate will yield a much better estimate of the fatality rate. Moreover, determining whether a lot of people have recovered remains to key to deciding whether it’s safe to open up the economy again and whether the US has begun to develop so-called “herd immunity,” — people immune to a second infection.

So far, the US has more than 834,000 confirmed cases and has suffered more than 43,000 deaths. One study in New York estimated that perhaps a third of deaths aren’t showing up in the official statistics. Even so, the US now has by far the most cases and deaths in the world. Worldwide, some 2.5 infections have been confirmed and 180,000 deaths.

The rate of increase in most areas of the US has slowed, but deaths have leveled off at a very high level – more than 2,000 per day.

The Facebook survey showing a very low rate of infection in most areas dovetails with a just-released set of studies by the World Health Organization. Limited testing for antibodies to COVID-19 in the general population has shown that even in countries with many documented cases and deaths, only 2-3 percent of the population has developed antibodies to the virus.

Stanford University researchers did a study in Santa Clara, California found that 50 to 85 times as many people had been infected by the virus as the confirmed case numbers suggested. The researchers did antibody testing on a representative sample of the population. The sample suggested that although the county had 1,094 confirmed cases, perhaps 48,000 to 81,000 people had been infected, but never developed symptoms. But that still represents only about 3 percent of the population.

Another study in the Netherlands tested 7,000 blood donation samples and found an infection rate of 3 percent.

First, it means most infected people don’t know they’re infected – and so aren’t likely to take precautions to avoid spreading it to others as the economy reopens.

Second, it means despite the widespread devastation of the first pass through the population, we’re a long way from developing herd immunity.

Generally, even a highly infections virus or bacteria won’t spread through a population once about 95 percent of the population gains immunity – either through a vaccination or a previous infection. That’s why public health officials sound the alarm when vaccination rates drop below 95 percent, as the flu vaccine has done in Arizona.

All of which greatly complicates the decision to reopen the economy, especially in hard-hit areas like Apache and Navajo county.

Only very effective drugs or a vaccine will likely slow the spread of the virus and tamp down the rising death toll.

One alternative strategy would involve isolating the most vulnerable populations, generally those over 65 and people with other health conditions like heart disease, high blood pressure, diabetes and other conditions. So far in Arizona, those over 65 account for about three-quarters of the deaths.

That being the case, it was good to see Walmart staff finally had face coverings (even more than usual, extremely helpful and friendly staff--thank you), and almost half of the shoppers.

Alternately, on the same day at Safeway, maybe 10-15% of the shoppers were utilizing face covering, which to me indicates concern for protecting others.

It's my understanding I wear a mask to protect others. Is it possible folks aren't aware of this principle? Might be helpful to share.

Again, sincere thanks to everyone keeping us going.

Extreme tourism including part time residents are at play.