WHITE MOUNTAINS – Exercising her constitutional authority as mayor for the Town of Pinetop-Lakeside, Stephanie Irwin called an emergency meeting of the council for 5:30 p.m. on Tuesday to issue a proclamation regarding the COVID-19 outbreak. Council members attended by phone and unanimously approved the proclamation for the safety of all citizens in preventing the spread of the virus.

A similar proclamation was also issued by the City of Show Low on Tuesday evening.

Proclamations open the door for the municipalities to request assistance from Navajo County, the State of Arizona and the federal government. 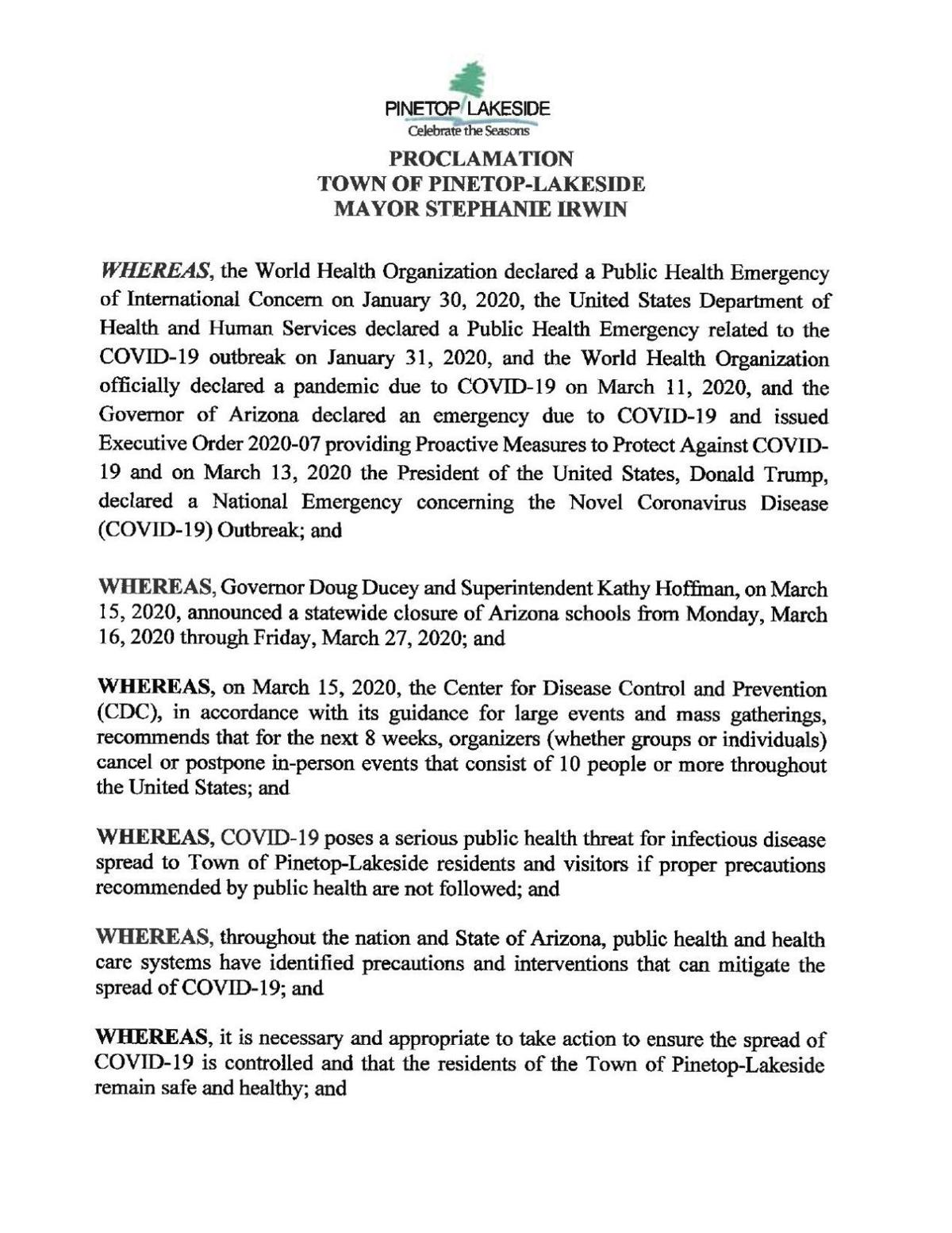 In Pinetop-Lakeside the library and visitor’s center will be closed, all town-scheduled activities creating a gathering, including the use of town facilities for private parties are cancelled (fees will refunded); out-of-state business travel is cancelled except by court order or case by case projects.

Public meetings for both communities will be modified allowing only those necessary for attendance and that number will be limited, excluding the general public.

For Pinetop-Lakeside the meetings will be live streamed on the Internet via Facebook, allowing Facebook messaging for the public.

Show Low meetings will be live streamed on the Show Low YouTube channel and available on Show Low TV. Show Low call to the public will be done by phone.

Businesses in both communities are encouraged to follow current protocols of Arizona Department of Health Services (ADHS) and to limit large gatherings on their premises and to use delivery services, drive-through service, social distancing, limit four patrons to a table and place tables six feet apart and reduce the number of occupied tables. Restaurants are to maintain excellent hygiene standards and require frequent hand washing between customer interactions and check workers for symptoms before they come to work.

Restaurants and bars are not being required to close in either community.

Community Services Manager Tony Alba said he and Visitor Information Specialist Annie DeRosier plan to visit each of the restaurants and bars on March 18 to provide them with a one-sheet protocol and allay any fears due to rumors about closures.

“Nothing is mandated,” said Alba. “Only recommendations to help to alleviate fears.”

Since the councilors were attending the emergency session telephonically, Irwin went down the roster to see if they had any questions. There were no questions but Councilor Mazie Hastings stated that the senior center is closed and Councilor Kathy Dahnk said they have closed the White Mountain Nature Center.

Before taking the vote on the proclamation, Irwin told the councilors that she has been in telephone conferences the last two days regarding COVID-19 with the governor’s office, Sen. Sinema’s office and talking with other mayors throughout the state.

In fact, earlier in the day at noon, having conferred with Show Low Mayor Daryl Seymore the previous evening, Town Manager Keith Johnson said Irwin had invited the mayors of surrounding towns and the county managers of Apache and Navajo counties to join them in a telephonic meeting to discuss what each was planning.

Irwin said that it is important that all jurisdictions try to have similar rules as our neighbors to enhance effectiveness.

“In this situation,” said Irwin, “we will be a moving target and everyday the recommendations are changing, but we are trying to keep up on it.”

Johnson said that Show Low, Winslow, Snowflake and Taylor were the towns that attended the Tuesday noon meeting. Navajo County indicated they had some technical difficulties in being able to attend. He said each town was adapting a similar proclamation to fit their town code.

Mayor Irwin stated that staff is encouraged to work remotely and asked councilors to only come to town hall if absolutely necessary. She said she would attend the March 19 council meeting in person, but instructed the rest of the council to conference in for the meeting.

The Visitor’s Center is closed to the public as well, but has transitioned to virtual communication. They will respond to the public’s needs by email to plavic@pinetoplakesideaz.gov or by phone at 928 882-2665 during normal business hours. Maps and frequently requested information are located in the kiosk outside of town hall.

“The next 15 days are crucial and it’s critical that we get ahead of the curve,” says Show Low Mayor and Navajo County Supervisor Daryl Seymore after reading the Proclamation. “Tests for those that meet the criteria will become more available and drive-thru tests are being made available to speed up the process.”

“If we are wise and smart and follow good hygiene practices, we can prevent spread of the virus,” added Seymore.

“Let’s be more neighborly than we ever have,” Seymore said in his closing statement regarding the need to take care of one another and protect those most vulnerable — the elderly and those with existing health conditions.

Seymore, in a Wednesday update video via Show Low TV, assured the community that “the food supply is stable across the US” but it does take time for the trucks to travel from place to place for delivery.

He also confirmed that the Four Seasons and White Mountain Connection bus transit system is operating as normal. “There are fewer riders because people don’t need to get as many places,” says Seymore, “And the staff is cleaning the buses more to protect drivers and passengers.”

The proclamations are in full effect until amended or terminated by the mayor or council. Anyone who knowingly fails or refuses to obey the orders issued in the Proclamation shall be guilty of a class 1 misdemeanor as authorized by law. 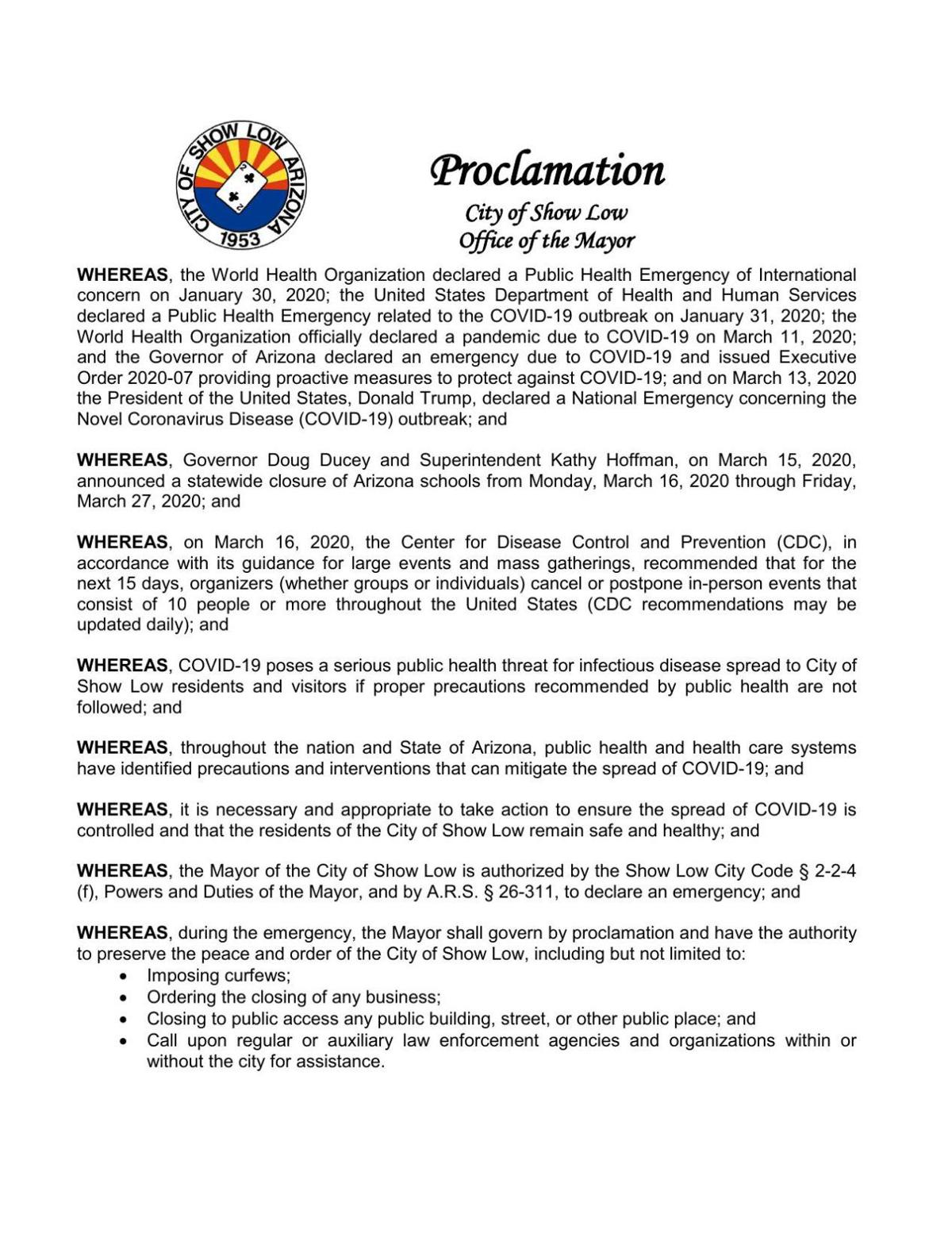 Laura Singleton contributed to this report.

Cities and towns have closed public facilities in order to prevent the spread of the novel coronavirus.

In Show Low, closures include:

• library (books can be ordered online)

• senior center (Meals on Wheels is delivering as normal)

In Pinetop-Lakeside, closures include: