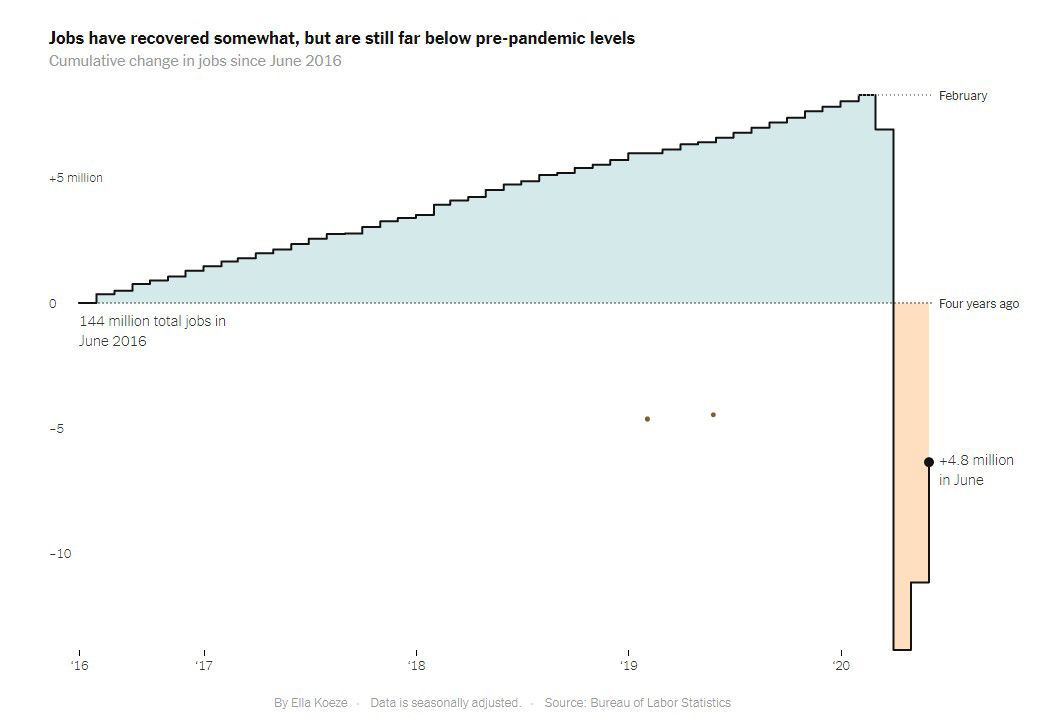 ARIZONA — Unemployment dropped sharply in June across the nation, although a resurgence of COVID-19 could threaten those gains in July.

Nationally, the jobless rate dropped from 15 percent in May to 11 percent in June, thanks to the addition of an estimated 4.8 million jobs. The US Department of Labor conceded that errors in data collection might mean the true unemployment rate is closer to 12 percent.

The monthly figures don’t include a county-by-county breakdown, which always lags a month behind national statistics.

However, Navajo and Apache counties likely share the good news, despite having one of the highest rates of COVID-19 cases in the country.

Arizona has seen one of the biggest increases in infection in the nation since the governor lifted the original “stay-at-home” order on May 15. The average number of daily confirmed infections has increased from about 500 to about 4,000. An estimated 90 percent of the state’s intensive care hospital beds are now full. The number of hospitalized COVID-19 patients has increased from about 800 to about 3,000.

Still, the economy has added jobs much faster than some economists predicted when the unemployment rate hit 16 percent, the highest levels seen since the Great Depression.

The economy in June added 4.8 million jobs, a quarter of the 20 million jobs lost when the pandemic shutdowns hit in April.

Some 1.4 million new people applied for unemployment benefits in June, a fraction of the number seeking benefits in each of the previous two months.

About 800,000 of those seeking new benefits applied for the federal CARES Act boost in unemployment benefits for those who lost their jobs due to COVID-19. The enhanced benefits would add $600 a week to the Arizona maximum benefit of $240 weekly. It also covers part-time and self-employed workers not covered by state unemployment insurance – although many of those workers who did apply are still waiting for benefits. However, the extra benefits end next month, which could prompt more people to seek work to avoid financial disaster – especially part time and self-employed workers.

The fine print of the numbers showed the college educated and whites in general enjoyed the biggest gains. The unemployment rate among black Americans actually increased slightly in June.

Among those with only a high school degree, only 49 percent were working. That compares to 68 percent of those with a college degree.

The food, service, leisure and hospitality industry so vital to the economy of the White Mountains continues to be among the hardest-hit sectors, with the impact of the added closures and the growing public concern about the surge in Arizona COVID-19 cases not yet factored into the figures.