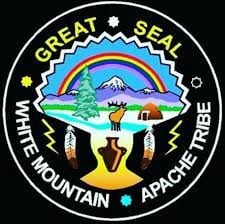 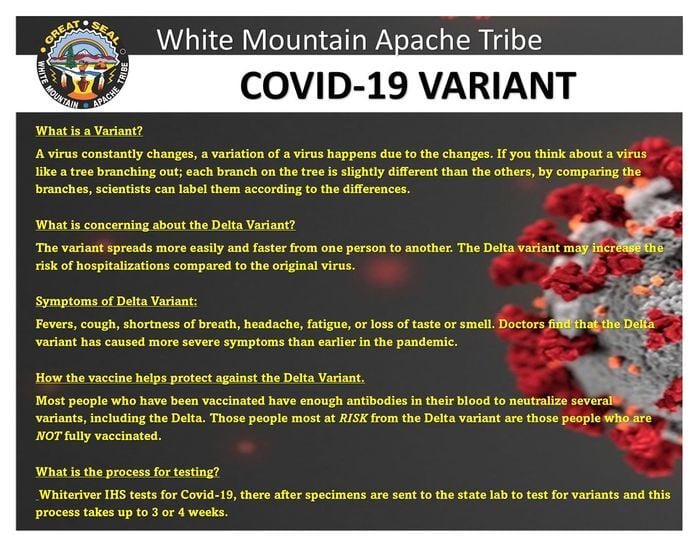 WHITERIVER — Following the July 7 Public Health Notification, which confirmed the first two cases of the Delta variant for the Fort Apache Indian Reservation, Tribal members began seeking answers to their questions regarding vaccinations and this new variant.

Chairwoman Gwendena Lee-Gatewood invited Whiteriver Indian Hospital Clinical Director Dr. James B. McAuley, an infectious disease expert, to join her on her July 10 Facebook livestream to address some of those questions, including an emphasis on pregnant and nursing women.

“All bacteria and viruses change over time, usually in response to infecting people.

He said the more people that get vaccinated, the less the virus can replicate and make variations.

The studies on the variant are early and though it seems that it might be more contagious, McAuley says that only time will tell.

Currently, the primary Alpha variant makes you just as sick as the Delta.

“The bottom line is if the virus can’t multiply in you because you’re immune, and you take care of it because you have been vaccinated, then you are not going to have to struggle with the variant.”

Symptoms for the Alpha and the Delta variants are exactly the same — fever, fatigue, cough and shortness of breath.

Right now there are only two Tribal community people who have the Delta variant and McAuley says they live off the reservation.

He said that vaccinations have remained a bit of a struggle until last week.

People who wanted to get vaccinated came in right away at the beginning of COVID-19 but then numbers slacked off to around 20 or 30 people a day, compared to several hundred per day back in January and February.

Last week the numbers climbed back up to around 100 per day.

“We need to remind people that 300 million doses have been given in the US and 170 million, or roughly one half of all the people in the US, have been fully vaccinated. So, it is not novel any more.

“This is more vaccinations per year than we ever get with flu, so you should feel confident that a lot of people have gone ahead of you. They’ve all done well so you are not the first in line,” said McAuley.

“We know the Delta virus is out, and we know that it’s becoming the dominant strain in most parts of the US, (it’s) not yet here but it will be here in bigger numbers.

“But, the studies from the Britain show that the efficacy of the vaccine for any COVID infection is about 85% against Delta. Remember, it was about 95% against the primary COVID Alpha virus. But more importantly, the vaccine remains a 100% effective, at least in the study in Britain, against severe illness or hospitalization or death,” McAuley said.

McAuley added what that means is that those who have gotten the vaccine, have a slightly increased chance that they could get infected with Delta but compared to Alpha, the original virus, we are still 100% protected from fatal disease.

Lee-Gatewood said a number of pregnant or nursing ladies want to know if they can take the vaccine.

McAuley said the vaccine is not a live virus and when it gets into you it doesn’t multiply and cause any disease related to COVID-19 that they are aware of.

“We also know, based on studies that have been done, that women who are pregnant who catch COVID do much, much worse than women who are not pregnant,” said McAuley.

“So, if you have a 25-year-old pregnant woman who gets sick with COVID, she has about 20 times increased chance of severe disease and death compared to a 25-year-old woman who is not pregnant.

She also has a two to three fold increase of losing the baby if she does not get so sick herself that she passes away.

“As far as we can tell it is safe. So, I think I would put it right up there with pertussis and flu vaccines that we have routinely been giving to pregnant women for many years now.

“So, we do advise women to get the vaccine.”

McAuley said they suggest a woman wait until the second or third trimester before getting the vaccine.

As to those who are nursing, he says studies show that nursing moms can get the vaccine and they pass some of the antibodies through the breast milk to the baby giving it a bit of protection as well.

Dr. Nadia Norton, a native physician at IHS, currently on maternity leave, and who worked with COVID-19 patients while pregnant, joined the livestream with her new baby.

She said when she was about 18 weeks pregnant she had the opportunity to get the vaccine and opted to do so.

“I weighed my risks against my benefits and decided that I am working and I wanted to remain working, and I wanted to remain there for the community that I serve as well as be there for my family, and that was still important to me. And, I felt that whatever risk I may be taking on with the vaccine was pretty low and I am glad I did it. I felt a lot of relief after I got the vaccine, and I had no issues during my pregnancy and no issues since I’ve had my baby,” said Norton.

McAuley says the key conversation we should be having about being cautious and not going where there are sick people without good social distancing, etc. He says if you have been vaccinated, you can feel confident that “you are not going to get severely ill or die.”

The hospital is working vaccines into regular visits and though not their preference will also offer them in the E.R. They still have events outside the hospital and they are currently posted on the White Mountain Apache Tribe Emergency Operations Facebook page.

Turn around time for checking for COVID-19 is around an hour. They use the batch system and once a week send them out to the state to determine what variants our circulating in the community. McAuley said both strains are treated the same regardless of which one a person has.

“And, each year, it may change a little but [will be] based on the changes in the virus. But, for right now, July of 2021, if you got the two doses of Pfizer, Moderna, or the single dose of Johnson & Johnson, we believe you are very well protected even against Delta, against severe disease, so that’s the good news,” said McAuley.

Thank you Dr. Norton for courageously sharing your personal story in such a public setting. Our IHS doctors are the best!