featured
The gift of music
By Amber Shepard Special to the Independent
12.24.19

ST. JOHNS — Fourth grader Valerie Romero is just like most nine-year-old girls in the area. She goes to St. Johns Middle School, plays with her friends, paints her nails, and she plays violin in music class. But, until recently, no one knew just how good of a violin player she really is. That was because Valerie was born a little differently and did not have the availability of both of her hands, which is necessary to play the instrument. But that all changed this month, thanks to local resident Nate Kellogg. 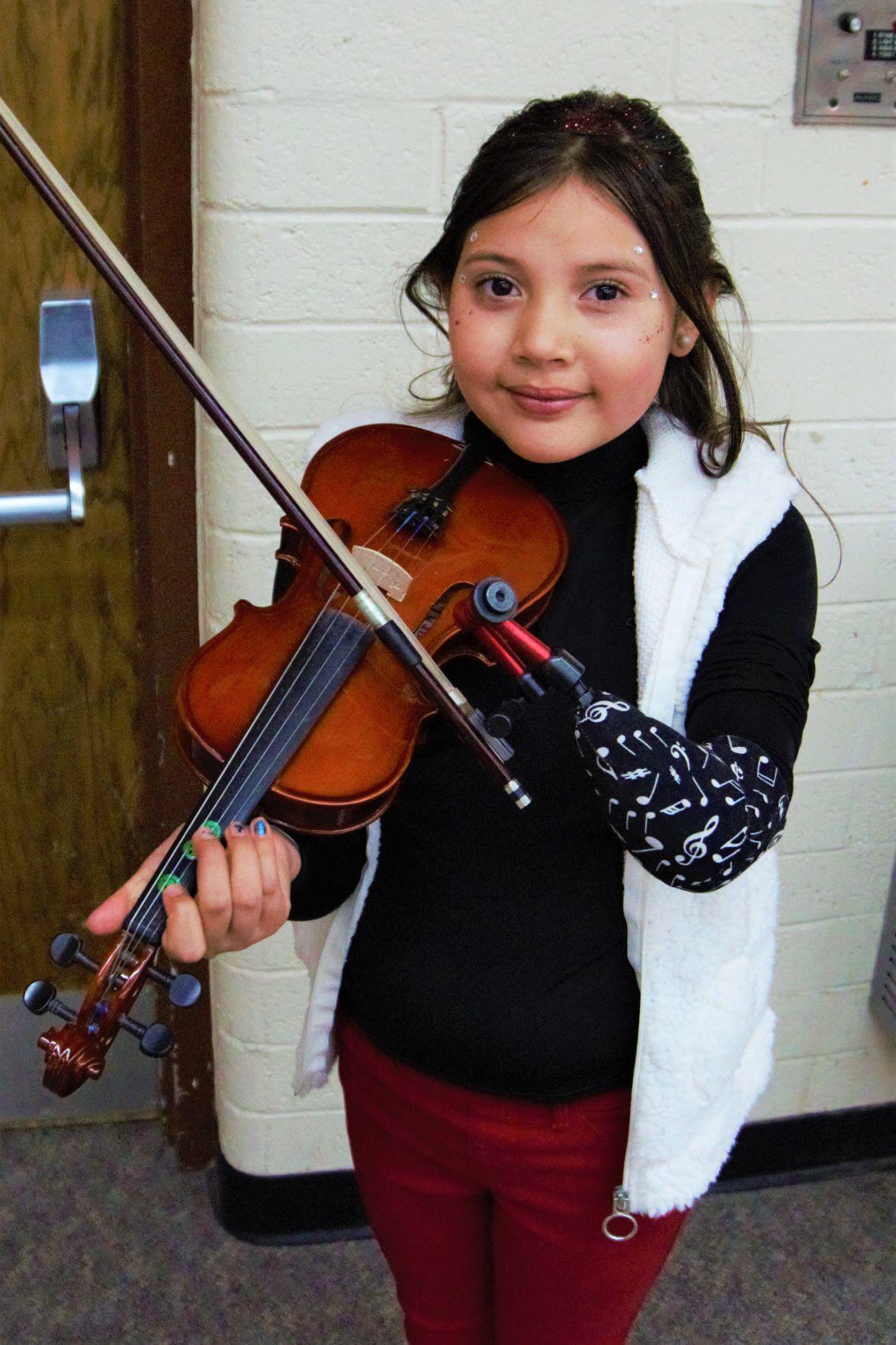 Valerie Romero, 9, can play the violin by herself, thanks to Nate Kellogg, father of three children.

Kellogg began to look at his various tools at work and asked his coworkers for help on the project.

“I got to talking to the guys at work, and there is an instrument holder that would work perfect. It was already made and something you could buy online,” Kellogg said. The device was adjustable, requiring only the turn of some knobs and it would hold a violin bow tightly.

The next step, after identifying the right tool, would be how to create a working prosthesis based around the instrument holder.

“I did some research online and figured out what to do, but I didn’t have the tools to do what [prosthesis makers] do. So, I did the next best thing. When I was in the military, there was this stuff called thermoplastic and that would mold to her arm.” Thermoplastic is a type of plastic material that becomes flexible and moldable in very hot water, and it hardens into shape as it cools back to room temperature.

This process can be repeated as necessary in order to get the correct shape or form desired. Thermoplastic products are now widely available on the internet and even in some art supply stores. It was the perfect material to help get a custom fit for Valerie’s arm, and it took only a few tries to get a custom fitting socket for the prosthesis.

“Once we decided we were going to do it, it took about a week,” Kellogg said, when asked how long the process took to make Valerie’s new bow holder.”

“It was just a matter of getting together and getting the supplies and everything.” 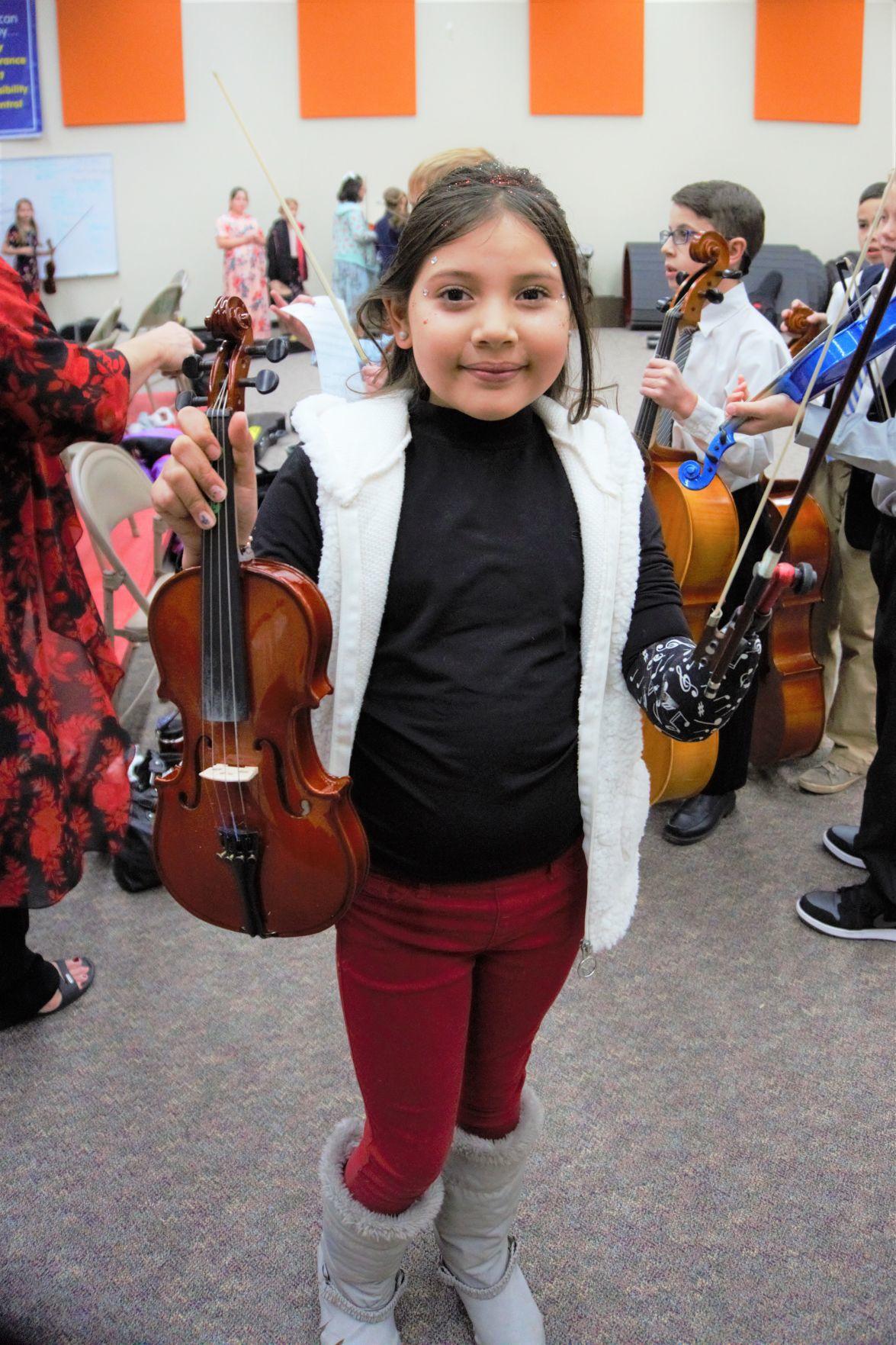 Valerie Romero, 9, can now play at concerts by holding her violin and bow thanks to Nate Kellogg.

As Valerie grows, the prosthetic will need to be updated, but for now, it’s working perfectly. She is quickly excelling in playing the violin now that she has the new prosthetic and she was ready to play alongside her fourth-grade counterparts for the Christmas concert Dec 16. With glitter in her hair and her new prosthetic arm on, she helped her class perform a Christmas classic, “Gloria (Angels We Have Heard on High).” On the last day of school before winter break, Dec. 20, she even played for the middle school assembly, impressing her fellow orchestra students with her skill. One middle school orchestra student remarked that she played “as good as a seventh grader!”

“I just think this is amazing,” Ruthie Price, the orchestra teacher for St. Johns Middle School, said of Valerie’s new prosthesis. “For this little girl, it’s really something.”

Valerie’s mother, Amalinda Gonzales and grandmother Bernadette Padilla, think so, too. They expressed how grateful they were for Kellogg for working to give Valerie such an incredible gift. To them, this wasn’t just a simple tool, but an example of what the Christmas season is all about: giving selflessly to others who are in need. 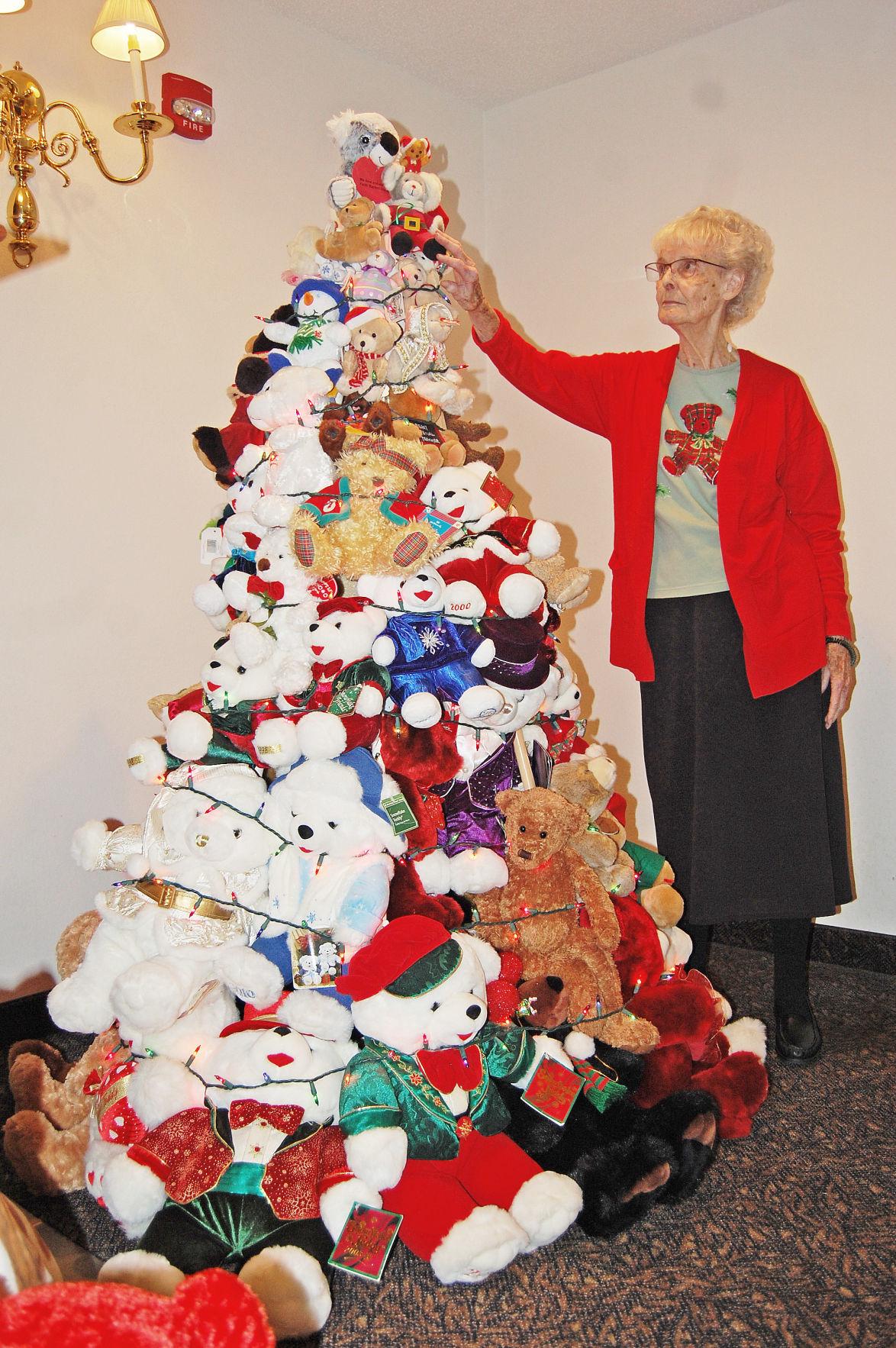 Solterra Senior Living resident Jean Reed, 85, stands next to her cherished teddy bear Christmas tree that has been a tradition for 29 years.

Jean Reed, a former teacher of Cortez, Colorado, started her tradition of making teddy bear Christmas trees 29 years ago because of her husband, who died in 2010.

Vernon and Jean Reed were married in 1953. Jean said her husband always had a hard time picking Christmas gifts for her, but knew she was very fond of teddy bears.

Every year one of the gifts she would get from him was a teddy bear.

Over the years they began to pile up, so Jean decided in 1990 to build a Christmas tree of teddy bears.

When others found out about it they wanted to be part of the fun.

“My students started bringing in some of their own, so I started putting them on the tree,” Jean said.

That is when the tradition really began because every year after that she and her students would build a teddy bear Christmas tree in the classroom with new teddy bears becoming part of it every year.

In the course of Vernon and Jean’s 57 year marriage they had four children.

One son, Mark, was killed in 1984, Jean said, when a group of pizza restaurant chain officials were taken on an airplane flight by Mark, who was a pilot by profession, when the plane crashed and everyone was killed.

Jean still has two children, one in Show Low and another in Grand Junction, Colorado, along with a grandchild.

Jean said she would take the wire frame she made to attach the teddy bears everywhere she and Vernon moved over the years. When they were living in Tucson, a friend made her a PVC pipe frame that is much more manageable and can be broken down and set up quickly.

That is the one she uses now.

When it came time for another move after Jean retired from teaching, she said prayer led her to Show Low, and of course the teddy bear Christmas tree tradition came with her.

She has been living at Solterra for a year now. But the tradition did not stop. Jean took all of the teddy bears she collected over the years, about 130 of them, and put them in a storage shed at Solterra nearly filling it to the brim.

When the people who run Solterra found out about Jean’s tradition they were more than happy to accommodate it, and even brought in some of their own teddy bears to add to it.

The beautiful teddy bear Christmas tree can be seen at Solterra. Anyone can visit and even take a photo of it if they choose.

Jean said one of the most special teddy bears on the tree is one with the year 2010 embroidered on the right paw, the year Vernon died.

Jean says that every time she sees a teddy bear it reminds her of Vernon and all of the students who would help build her teddy bear Christmas trees every Christmas.

SHOW LOW — Great-grandma Judy Clark of Show Low, has been secretly planning a surprise coming home for her son, Army Command Sgt. Major Frank Rael. He’s been stationed in Hawaii for several months and hasn’t even seen where the family is living now because they moved to a home just outside Show Low in August while he was overseas. 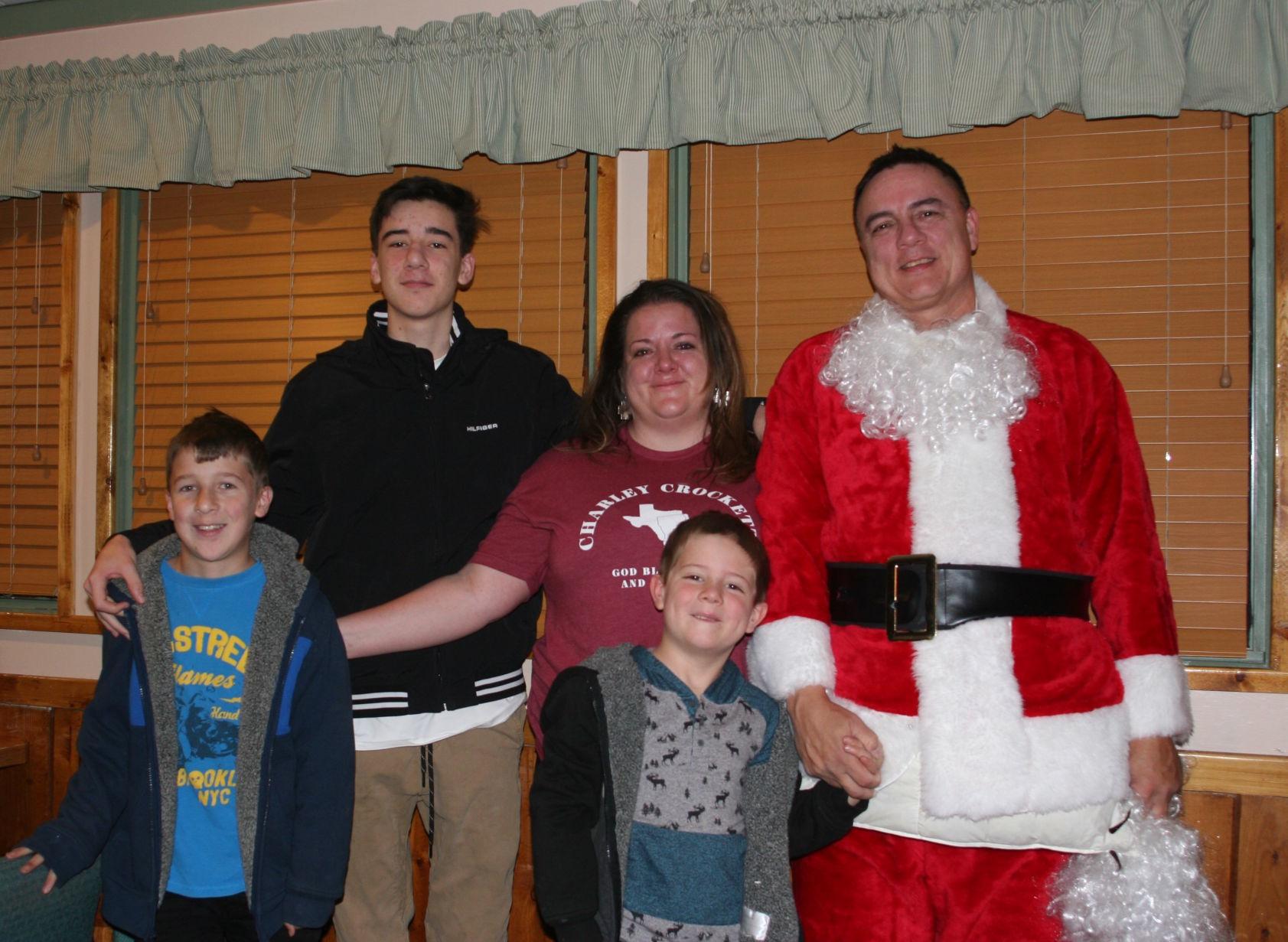 From left is middle son Ari (10); oldest son Sean (16); wife, Kelly; youngest son, Matthew (6) and Command Sergeant Major Frank Rael. With some heavy-duty orchestrating from Grandma Clark, Frank Rael surprises his family by coming home for Christmas. He has been stationed in Hawaii for several months. Show Low has been the family’s home only since last August. Frank will be joining his family full-time later in 2020 when he retires from a 30-year Army career. Grandma Judy Clark convinced the family to meet her at Show Low Cafe for breakfast on Monday morning so that Dad could walk in and surprise everyone.

Rael’s wife, Kelly, and their three children moved and got settled in the new house all by themselves. The decision was made to move to Show Low because that’s where Frank wants to hang his hat in retirement. 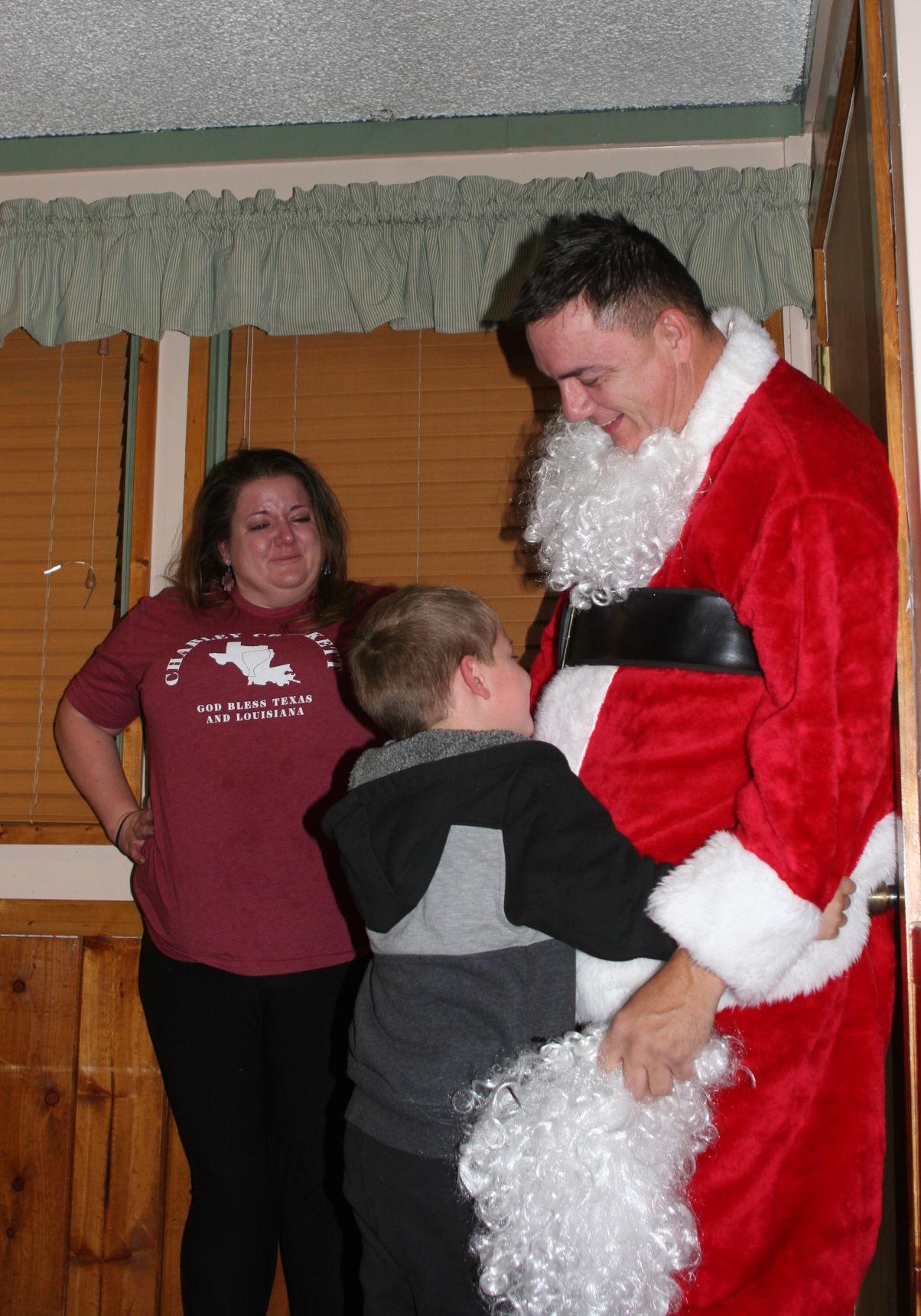 This is where Great Grandma Judy Clark comes in. 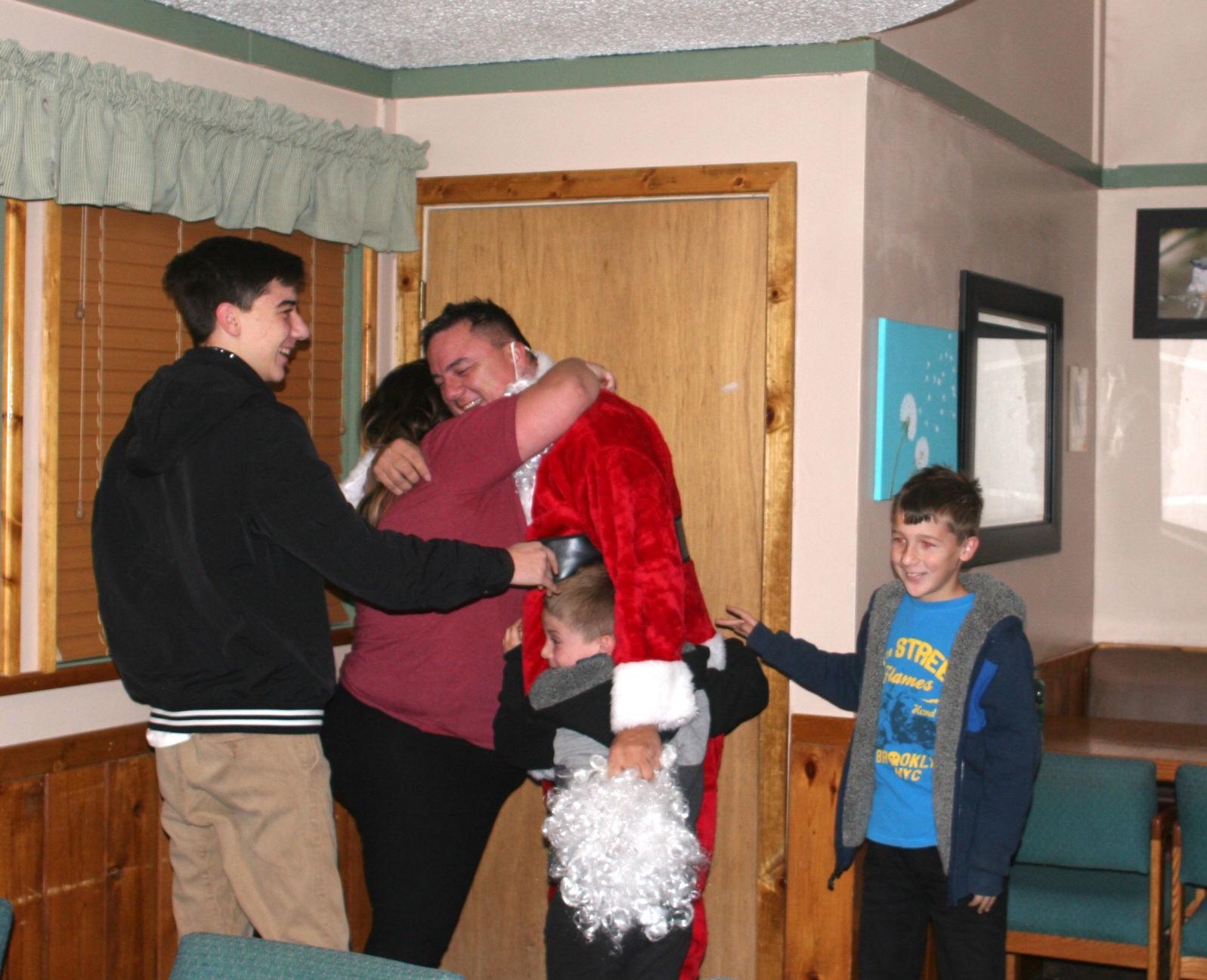 From left are Frank and Kelly’s oldest son, Sean, 16; Kelly Rael; Frank Rael, Matthew, 6, and Ari, 10. Command Sergeant Major Frank Rael came home for Christmas and surprised his immediate and extended family by walking into Show Low Cafe dressed as Santa Claus. Rael had not been home from his base in Hawaii for several months. Great Grandma Judy Clark secretly planned the homecoming with Frank.

“Frank hasn’t even seen where the family is living,” says Clark. “We want to surprise the family by getting him home for Christmas. Right now they think he can’t come home,” she explained last week. 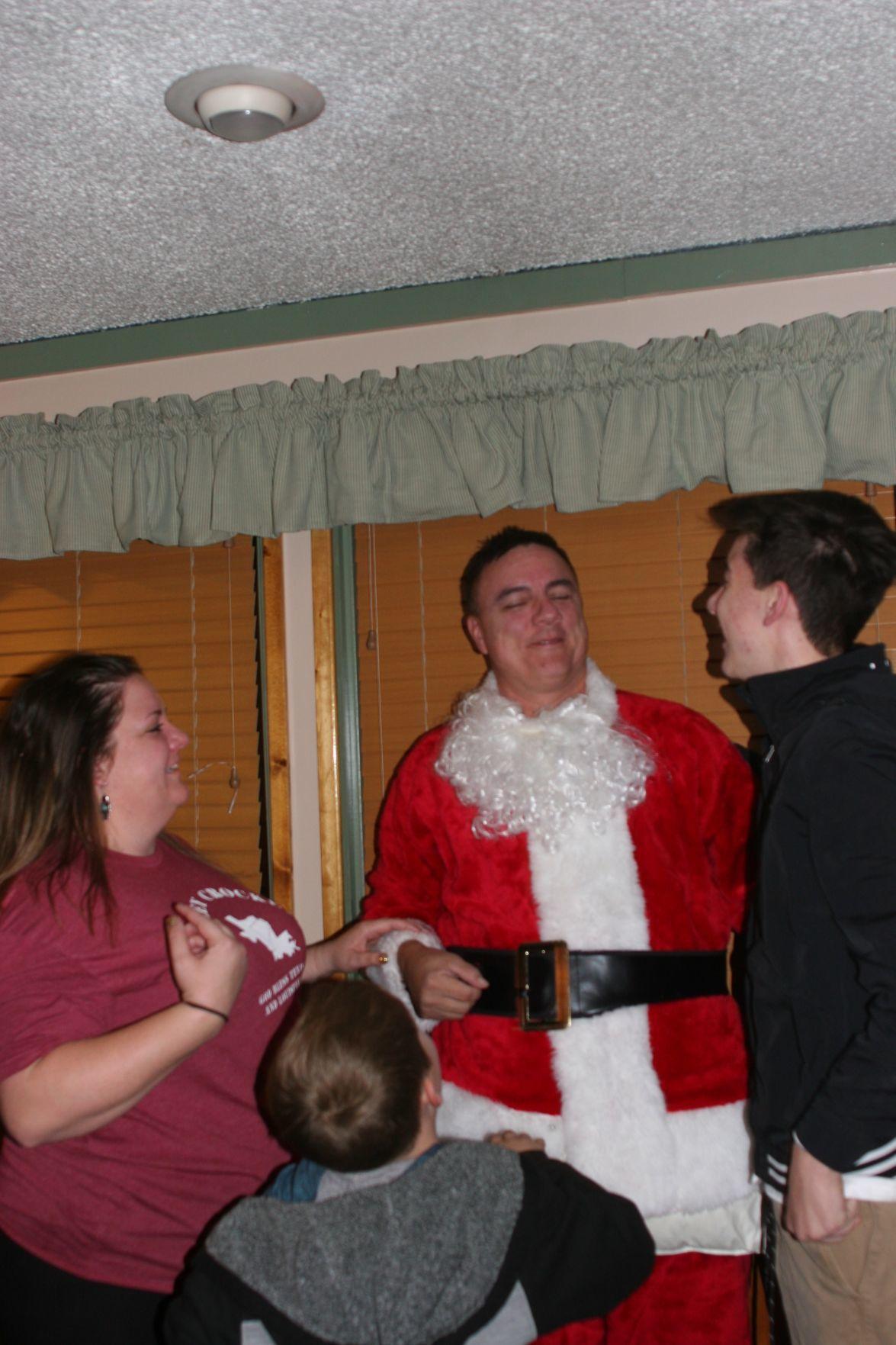 Clark convinced the family to get together with her for breakfast at Show Low Cafe Monday, Dec. 23. He walked into the dining area in a Santa suit where about 14 family members were seated. 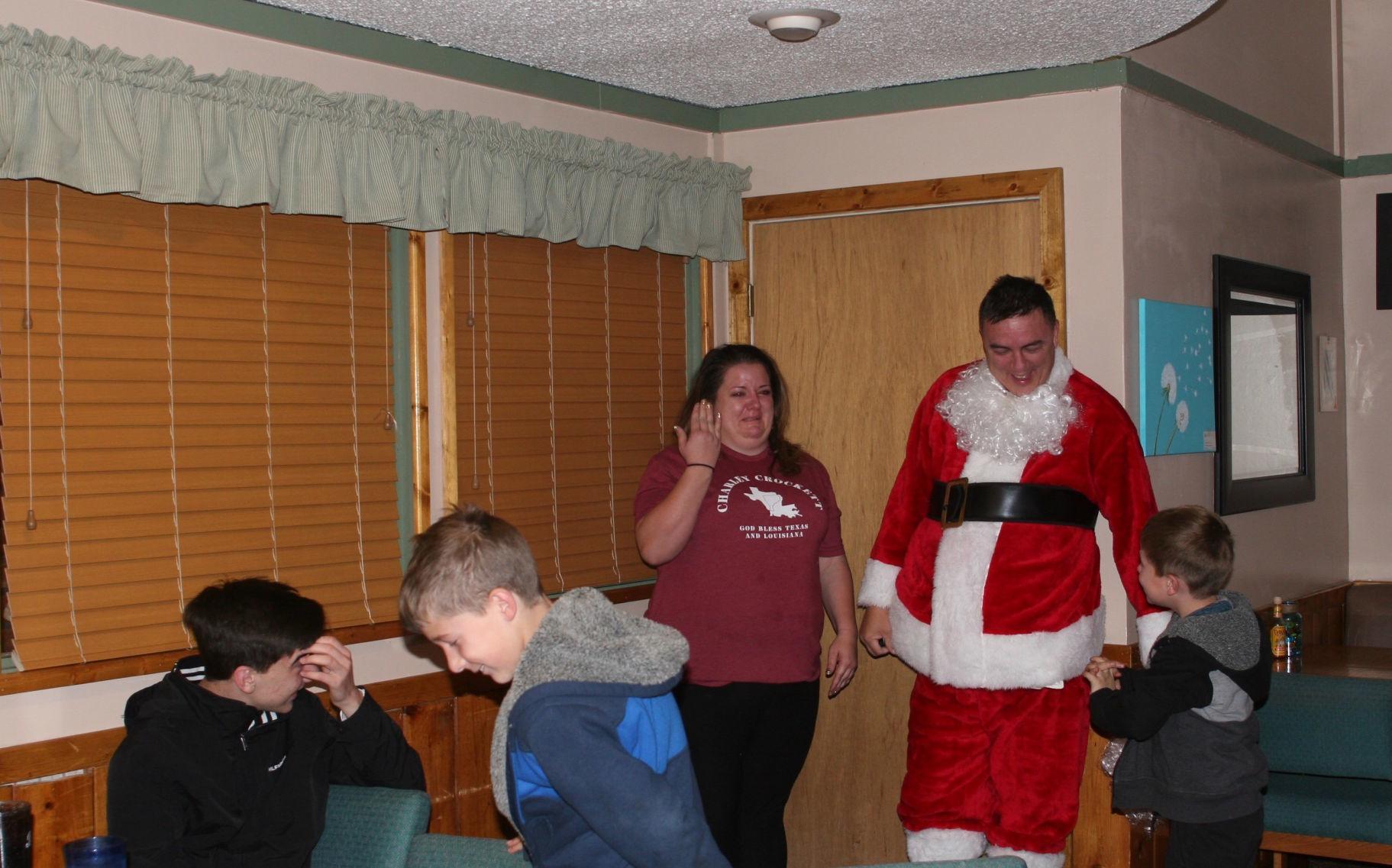 At first, they didn’t recognize him. Much to his wife’s surprise, he kissed her through his fluffy white beard and the mystery was revealed. 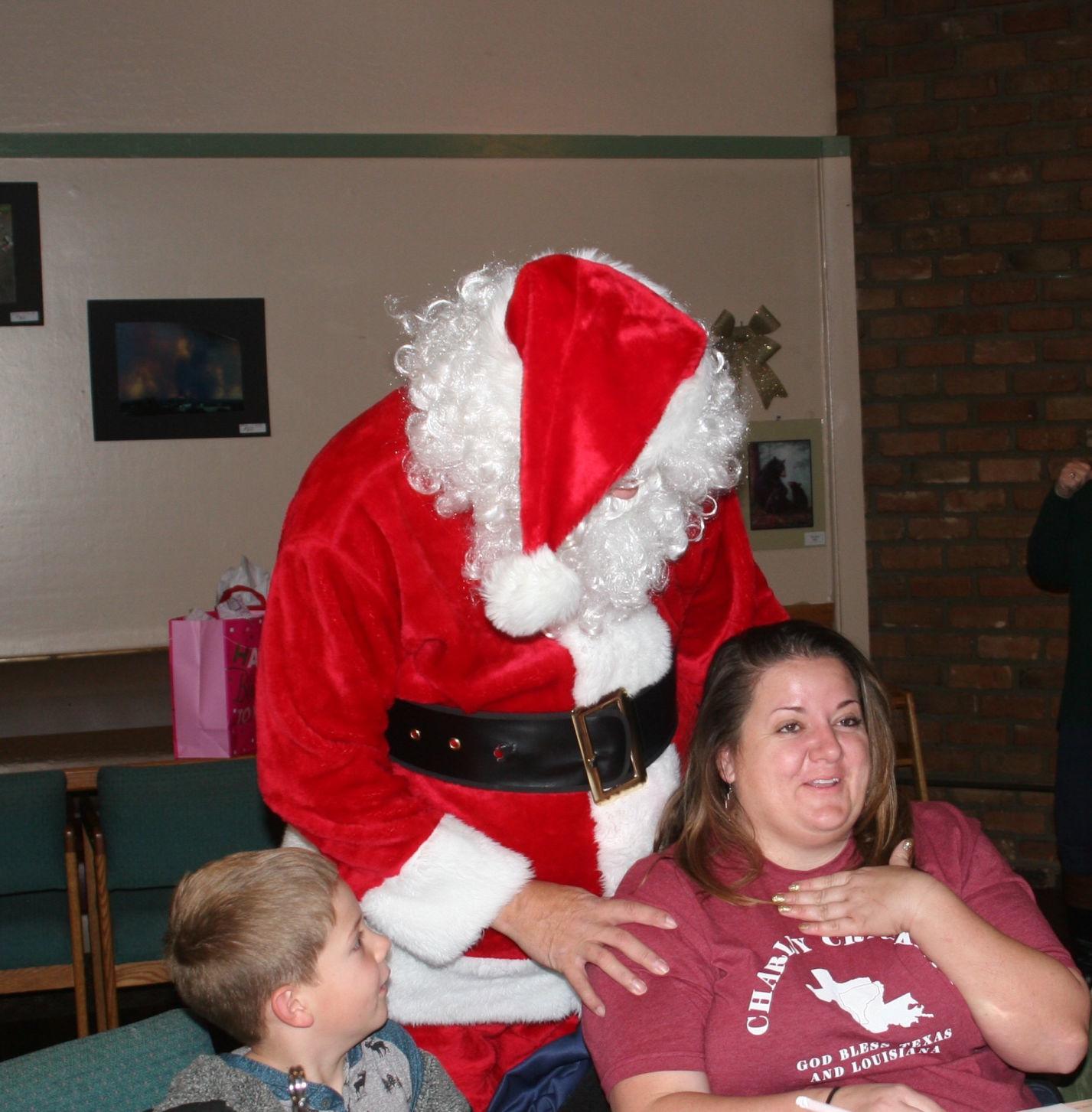 His three sons, Sean, Ari and Matthew blinked several times, looking at one another for assurances that it was true — Dad is home for Christmas! 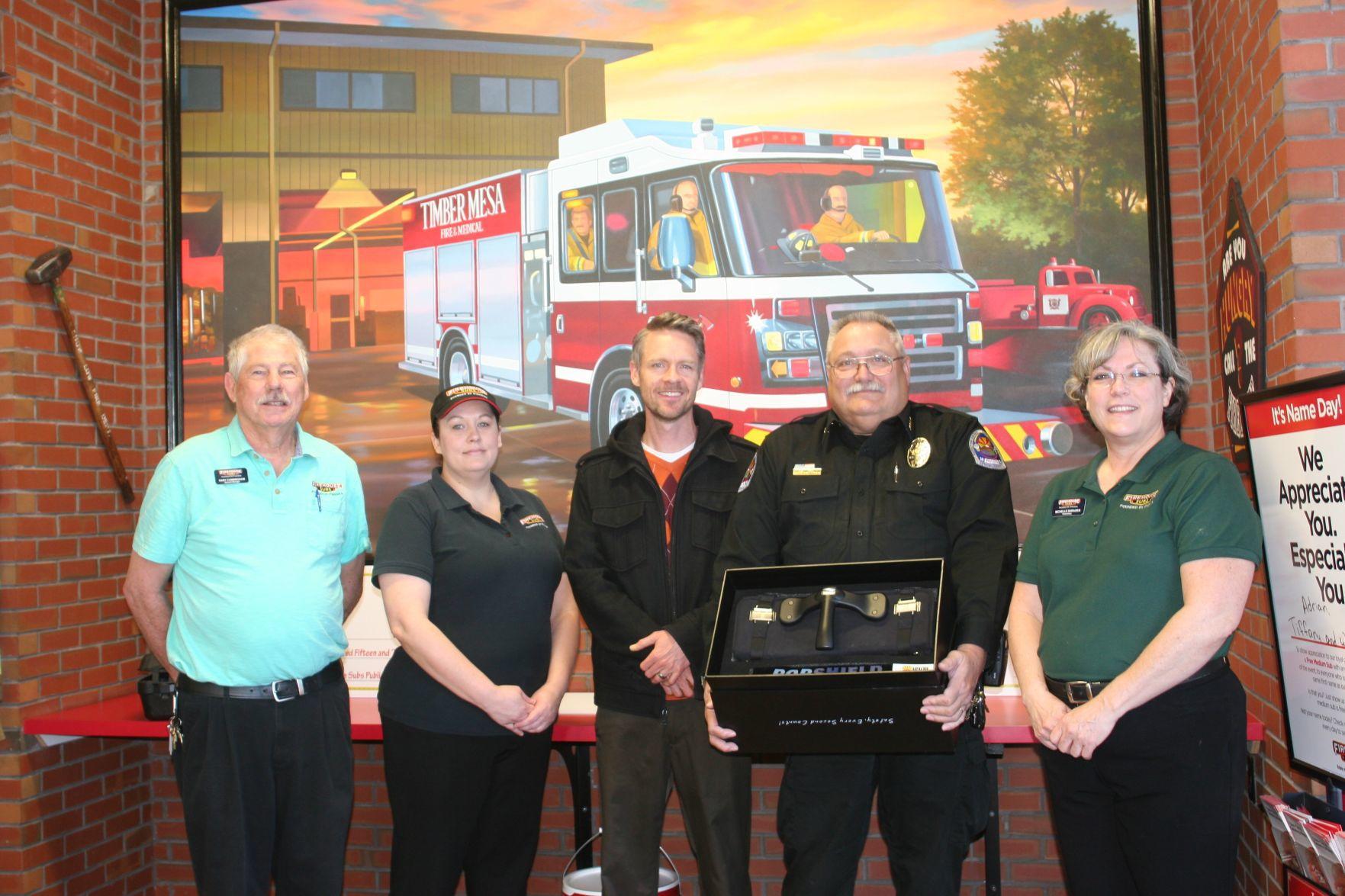 Springerville Chief of Police Mike C. Nuttall holds one of several of ballistic shields which will protect officers from gunfire. They purchased the shields with grant funding awarded by the Firehouse Subs Public Safety Foundation. Firehouse Subs staff are on his left and store manager and Franchisee Michelle Shrader is on his right. 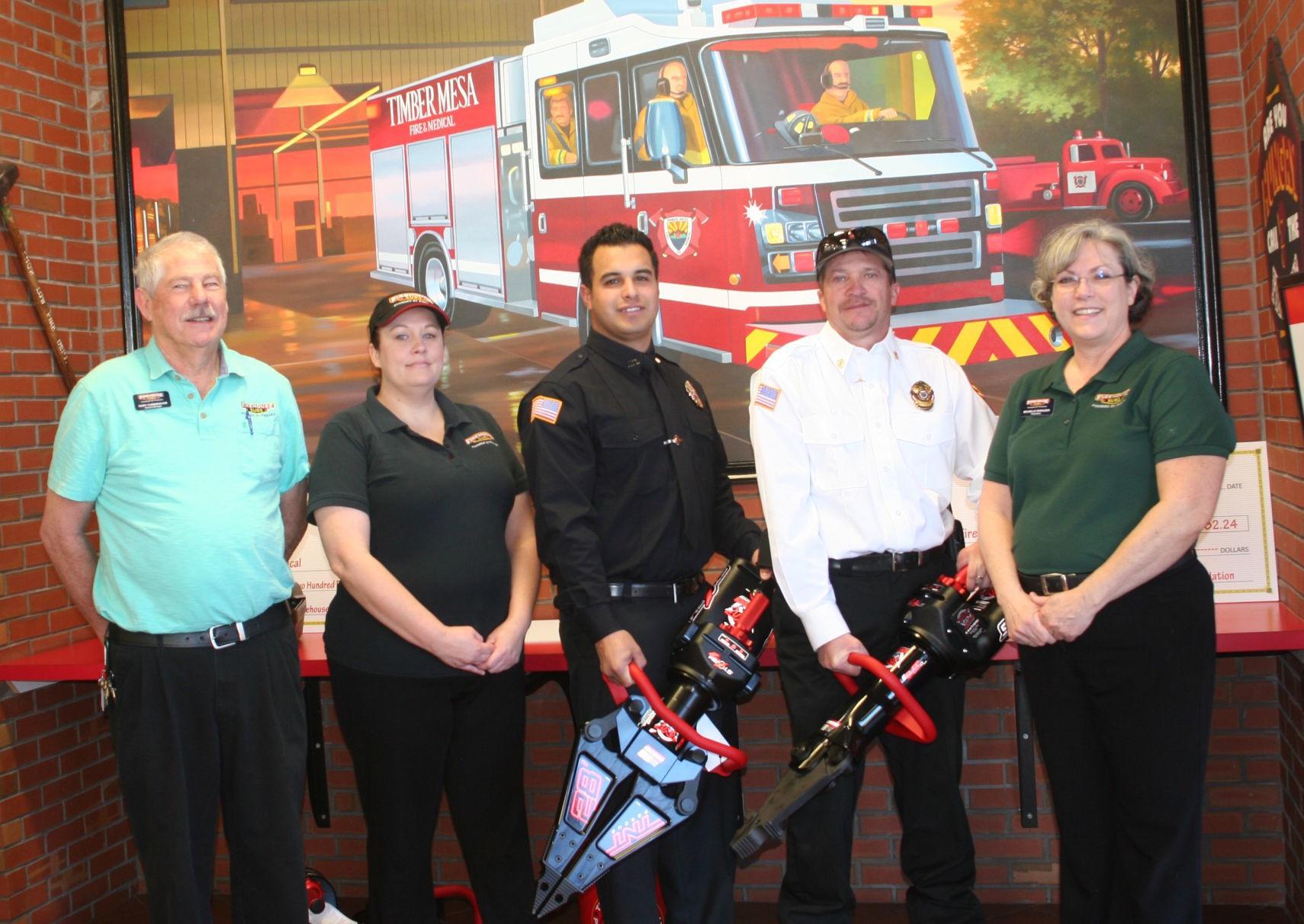 And, Timber-Mesa Fire & Medical District in Navajo County was awarded $14,215.74 to purchase gas detectors and accessories. 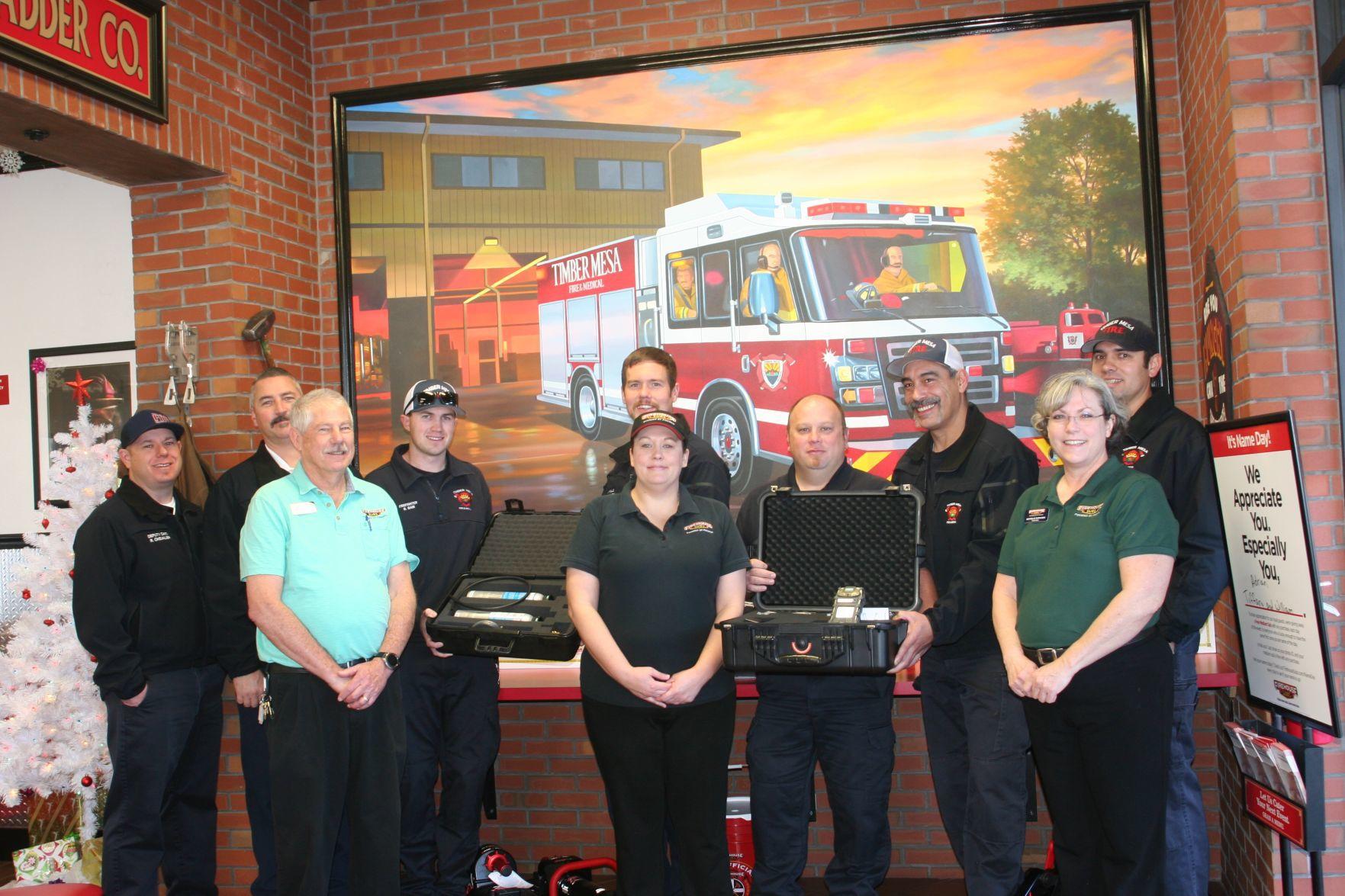 Members of Timber-Mesa Fire & Medical District purchased $14,215 worth of gas detectors and accessories with funds awarded through the Firehouse Subs Public Safety Foundation.

“Because of the generous donations of our customers, we are able to continue giving back in this way,” explained Show Low Firehouse Subs manager and franchisee Michelle Shrader. 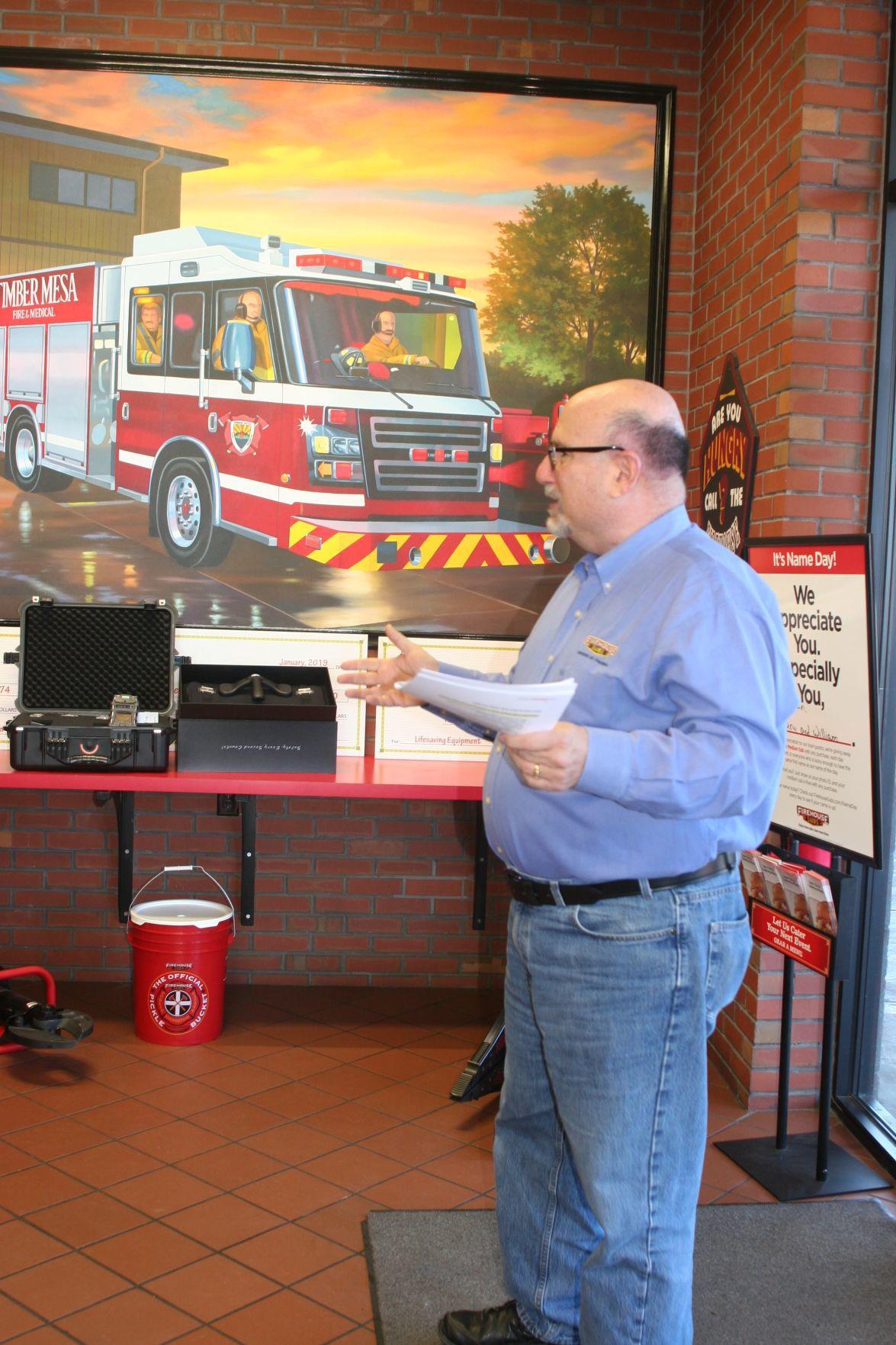 Firehouse Subs Area Manager Scott Friedman thanks the fire districts and police departments for taking the time to apply for the grants through the Firehouse Subs Public Safety Foundation.

Customers can donate to the foundation in several ways. They can round up their receipt total, donating right at the register. They can also purchase the used (but clean) five gallon pickle buckets right in the store for only $2.00. Money donation to the organization goes to the grant fund and is distributed as local agencies apply and are approved by the Foundation. 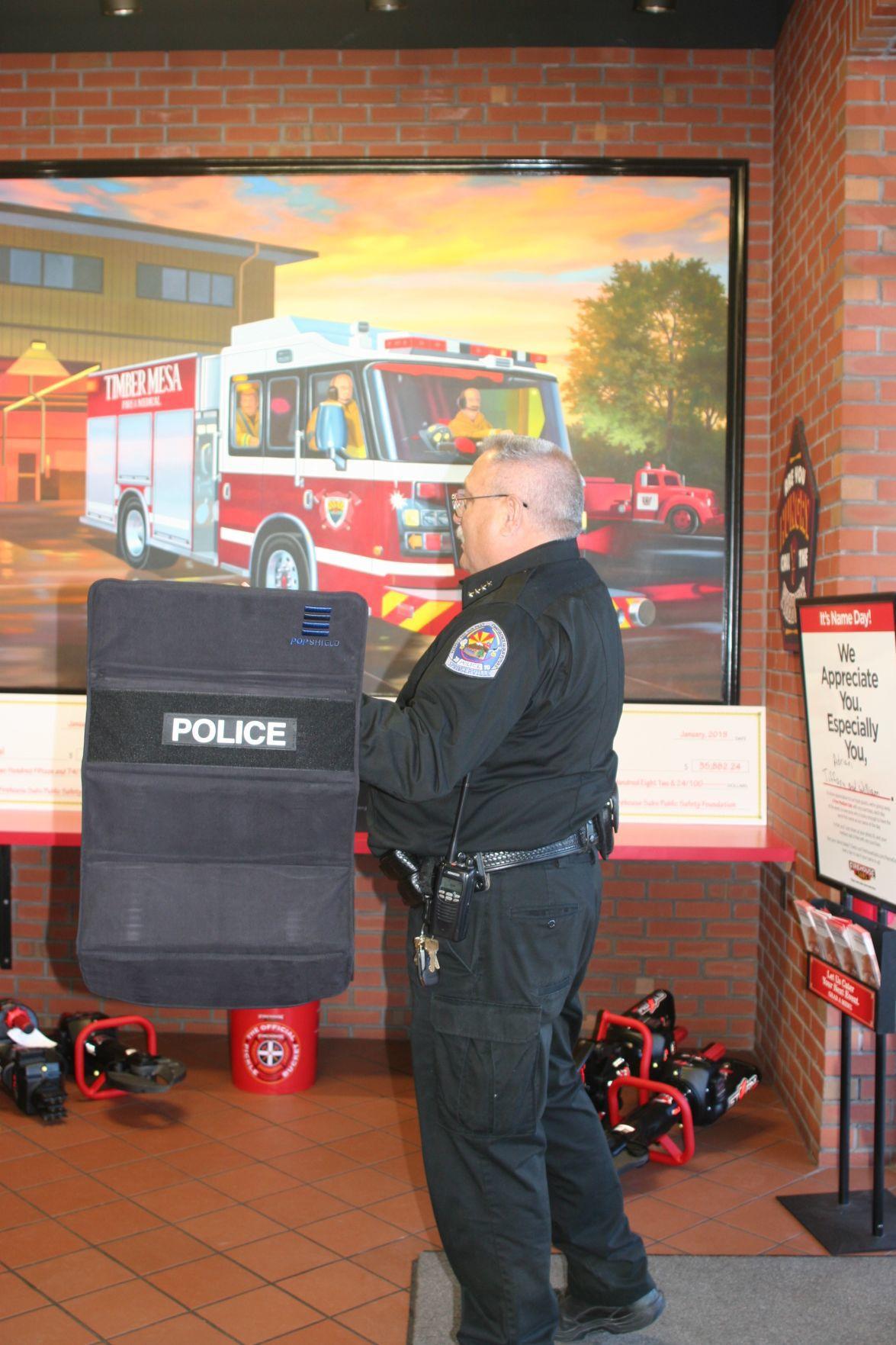 “To date, the Foundation has granted over $46 million to provide lifesaving equipment, training, and support to first responder agencies in Arizona,” says Firehouse Subs Area Representative Scott Friedman. “The best part is that .90 cents of every dollar collected goes directly to the Foundation.”

For more information about the program, visit www.firehousesubsfoundation.org/.