featured
How white is it?
tbalcom  / By Trudy Balcom The Independent
11.29.19

WHITE MOUNTAINS — The White Mountains got their name for a reason, right?

The first major winter storm of the season that affects a wide swath of northern Arizona was poised to strike as this issue went to press.

Did you have to shovel your way out to the mailbox to get this newspaper? 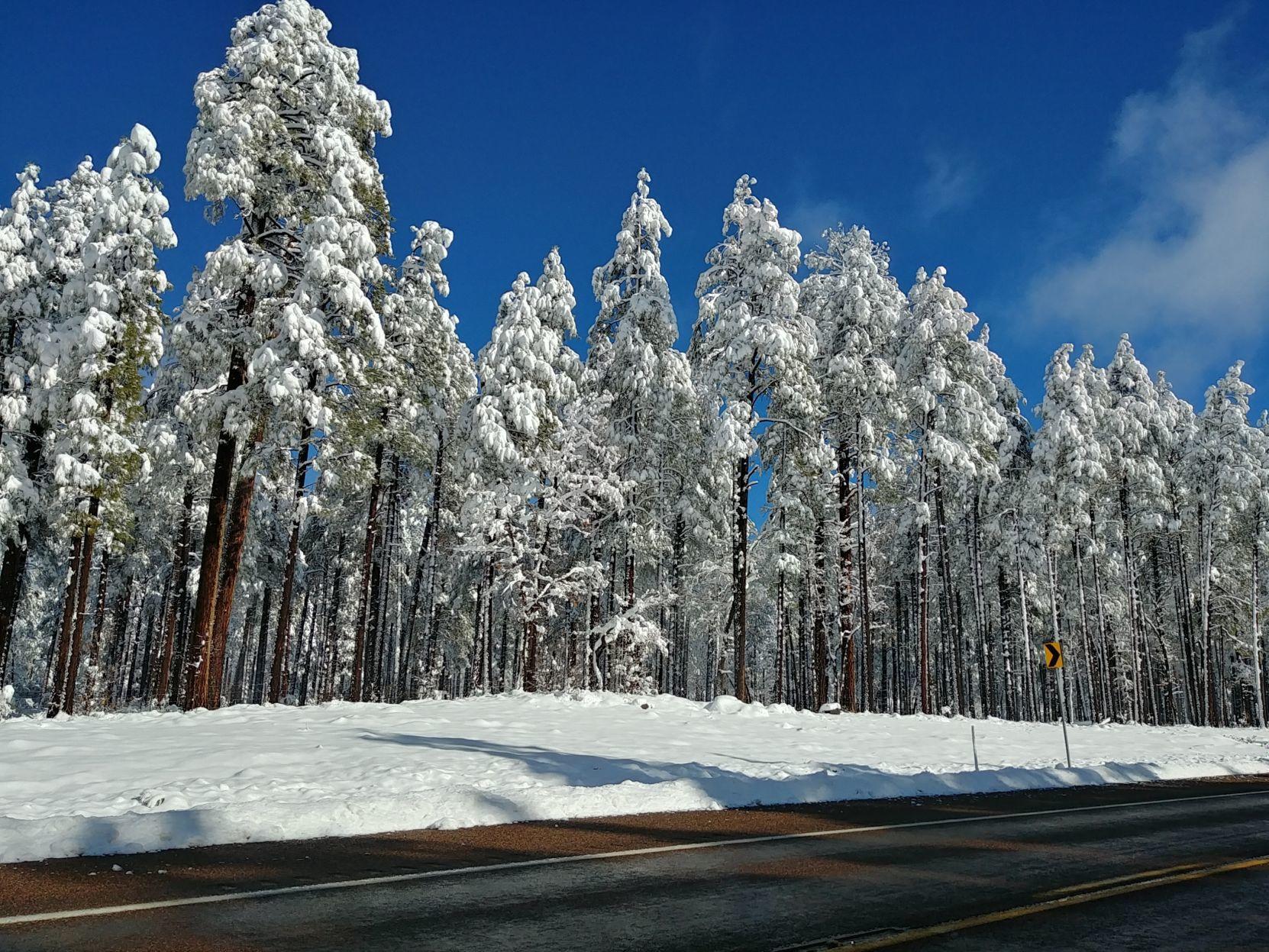 Ponderosa are dressed for the season after the first winter storm.

The National Weather Service was predicting snowfall across the region, with lower elevation areas like Snowflake-Taylor expected to receive 4-6 inches of new snow, and St. Johns a dusting of 2-4 inches.

As much as 17 to 23 inches of snow was predicted at Alpine, an area that received about 10 inches from the first snow of the season — which affected higher elevations, providing only a dusting to Show Low. Show Low and Heber/Overgaard are predicted to get about 9 to 15 inches of snow from this storm.

The storm arrived just in time for the Thanksgiving holiday travel period. Authorities urged motorists to leave for their destination before the storm, if possible, or to cancel travel plans.

The storm also arrived on the heels of a major power outage that occurred on Nov. 20-23, affecting 15,000 Navopache Electric Cooperative (NEC) customers from Whiteriver and Pinetop to Vernon and east to Nutrioso and Alpine and into Catron County, New Mexico. Alpine customers regained power on Sat. Nov. 23, after over 50 hours without electricity during freezing weather. 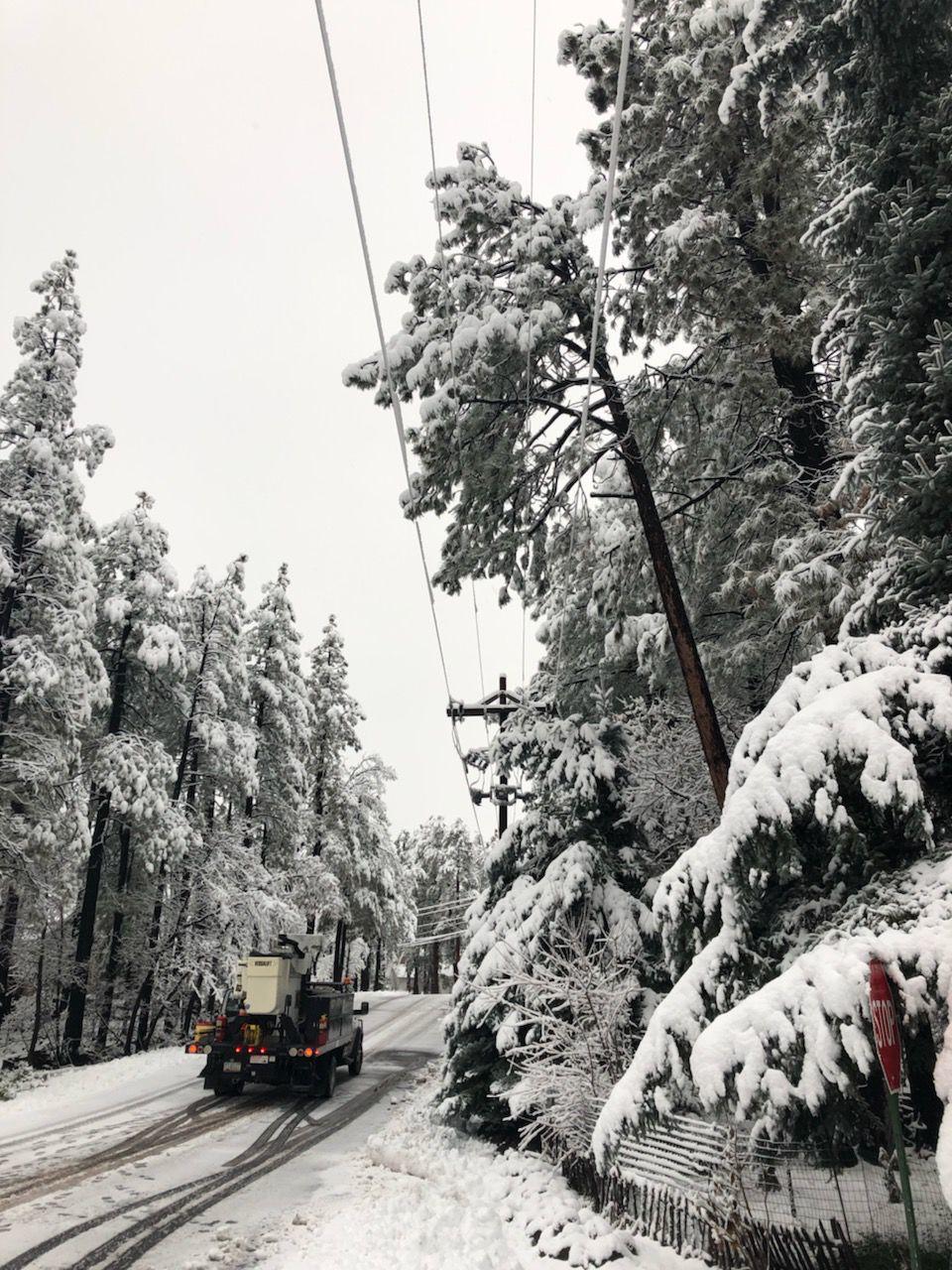 “It has been a little over 10 years since NEC has had an outage of this magnitude,” stated NEC in a press release Tuesday. “The areas (where)the transmission lines were taken down by the storm received significant amounts of heavy, snow, had high winds, and crews were working in conditions at times that were so cold that they had a water pump on one of the snow cats freeze,” the press release stated.

Many areas affected by the outages along the 3,500 miles of NEC lines were in remote, hard to access places with deep snow, Jennifer Wade, NEC communications specialist said in a phone call to the Independent. Where bucket trucks could not be used, crews had to climb the poles and make repairs by hand.

“NEC has ensured that all of the systems are up to date and fully functional in preparation for the upcoming storms. Management is also making sure that all crews are well rested in preparation should another outage occur, as well as making sure that all equipment is staged and ready to go and materials are on hand. This storm is expected to be colder, so we are in hopes that the snow will not be as heavy as with this last storm,” NEC said. 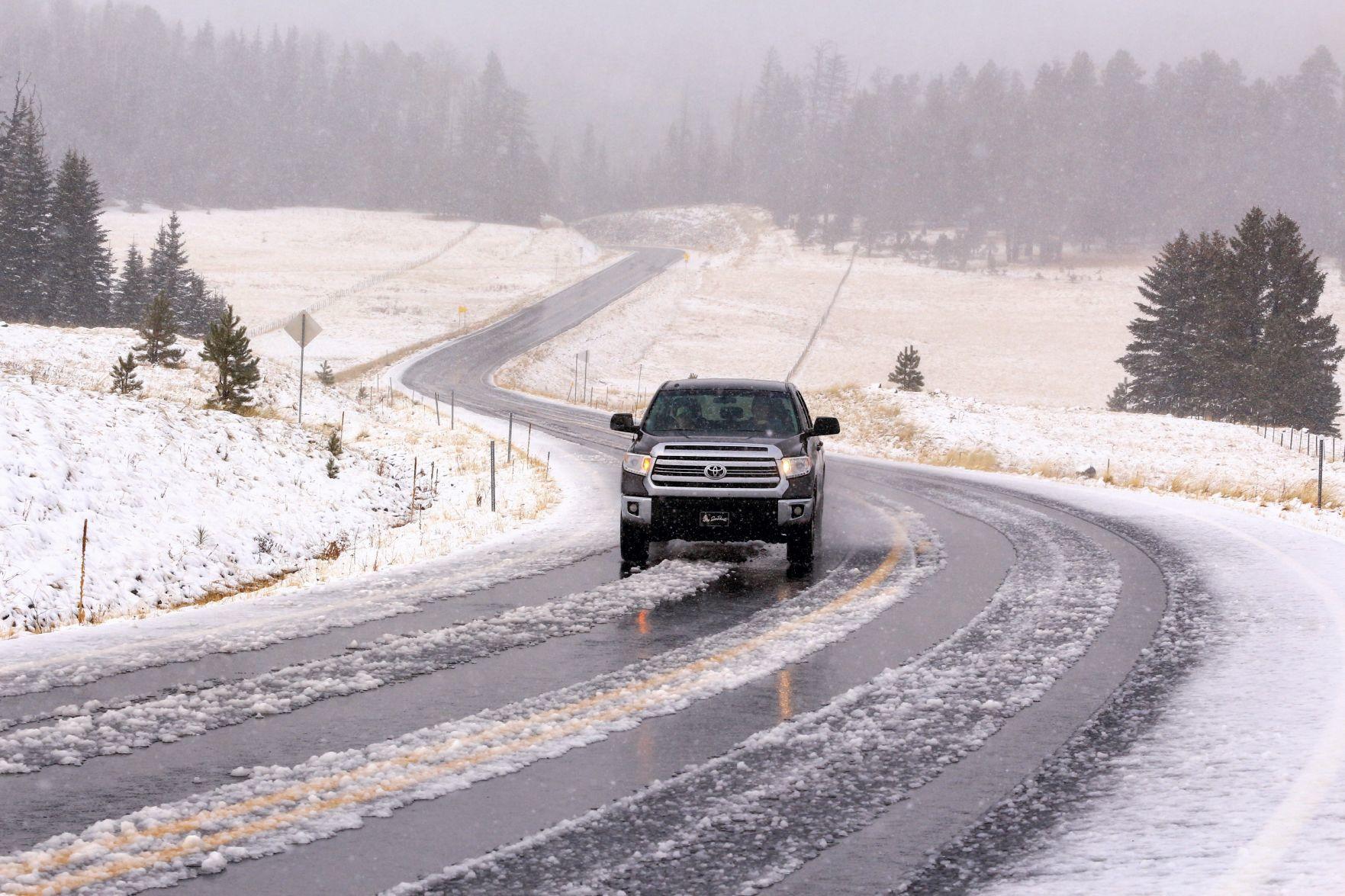 Snow began falling Wednesday in in the high elevation areas near Sunrise Park Resort. A winter storm warning remained in effect through Thursday, with snow flurries predicted into Friday morning.

Navajo County Emergency Manager Catrina Jenkins said she wanted to urge people to be prepared as much as possible for a power outage, or to have a plan for a family or friend to stay with if a lengthy power outage occurs. Jenkins said that it was her agency that coordinated the opening of warming shelters in Pinetop and Vernon during the previous outage that provided a safe place for people to come and warm up. The centers were not open for overnight accommodations, however. Jenkins said that Emergency Management is seeking more volunteers to help staff warming centers, as the need arises.

Jenkins said that ADOT will plow state highways round the clock, and that the county will work to keep main roads open. But she advised people to be patient in the event of a major snowfall.

“There’s a lot of road out there and it takes time,” she said on Tuesday.

Jenkins did advise that plow drivers would be notified of 9-1-1 emergency calls, as needed.

“With the power outage we started selling a lot of emergency lights — battery operated. Lights and lamp oil, fire starters, pellets, firewood,” he said. In the store’s small engine repair shop, Chris Wilmann said he had a lot of generators and snowblowers to fix.

The Climate Prediction Center of the National Weather Service is predicting above normal temperatures and above normal precipitation for the month of December in northern Arizona.

Latest_news
Thinning forests will protect the recreation economy
By Peter Aleshire Special to the Independent
11.29.19

WHITE MOUNTAINS — Let’s thin and burn a million acres. And let’s do that in the heart of some of the most heavily used national forests in the country. Count on lots of logging trucks, processing sites and smoke.

Now, maybe that doesn’t make it sound like treating the forest will improve the weekend camping trip, maybe not in the short term: But in the long-term, it should work out great.

And for sure it beats the heck out of another Rodeo-Chediski wildfire – which could devastate the recreation and tourist economy of surviving forested communities for a decade. 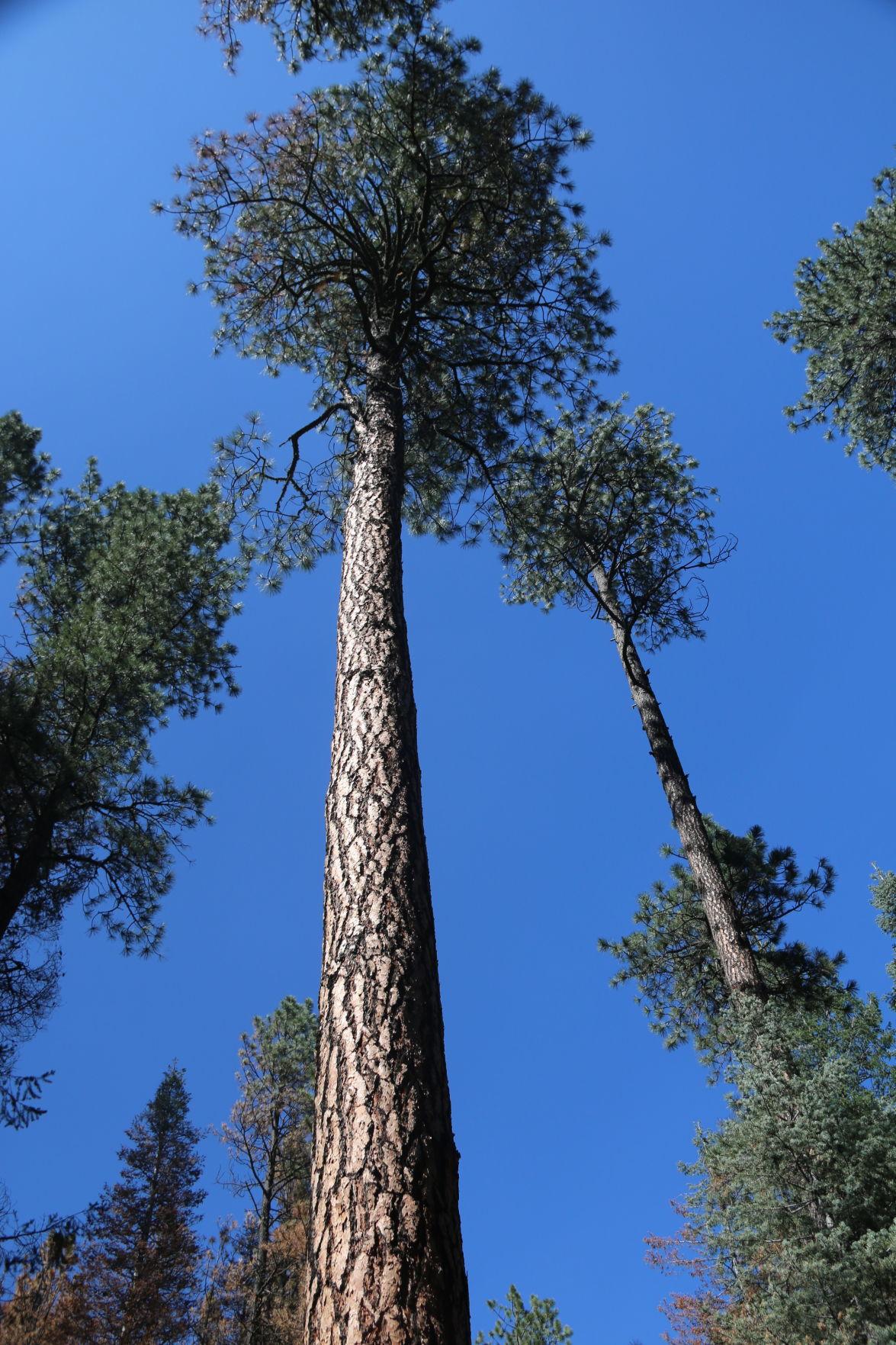 That’s the conclusions that emerge from the analysis of the Rim Country Environmental Impact Statement (EIS) of the 4-Forests Restoration Initiative (4FRI). In today’s installment of the series on what 4FRI means to the high country, we’ll look at the impact of the combination of thinning projects and controlled burns on recreation and tourism. 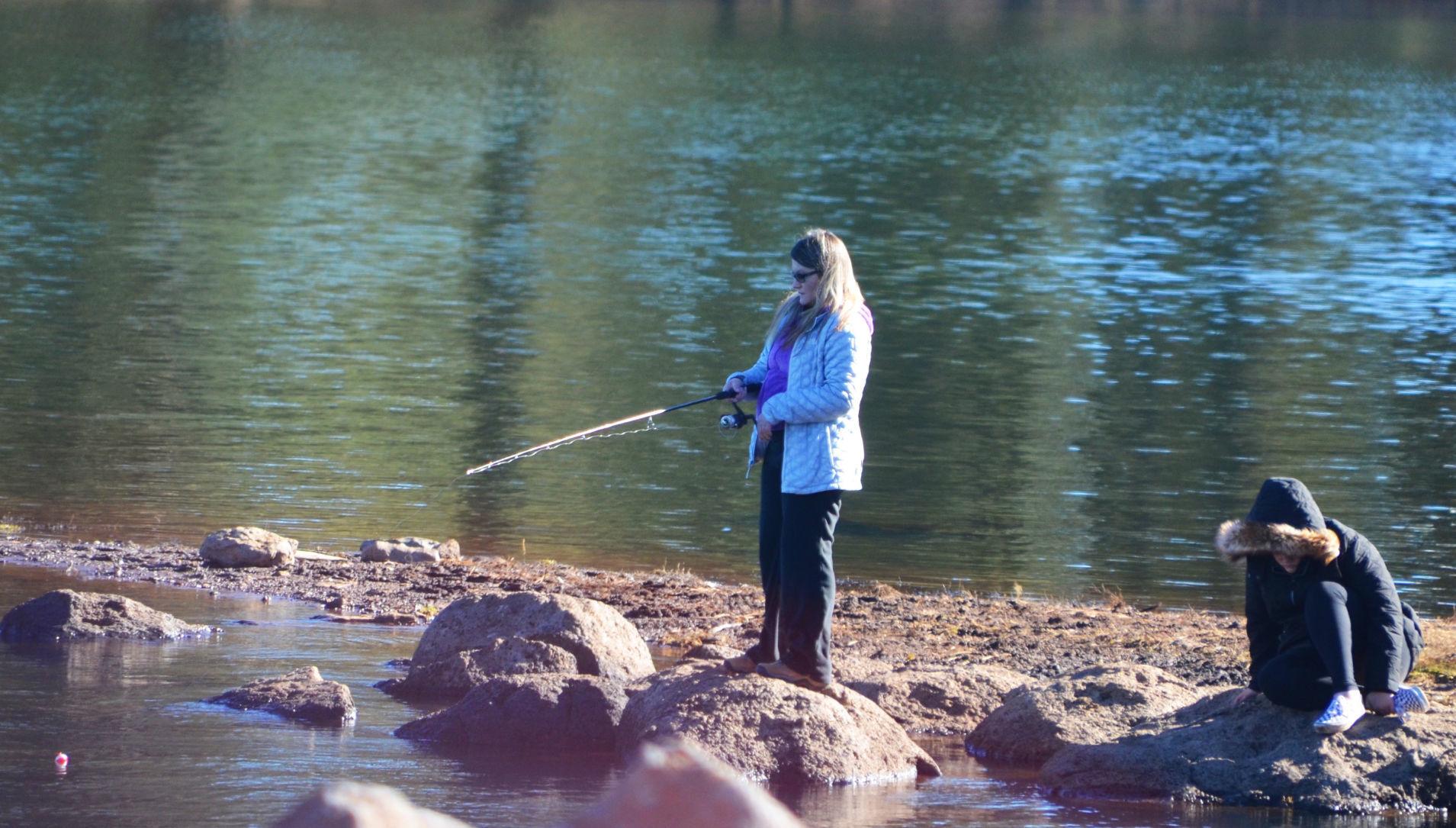 Fishing is a major recreational draw in the White Mountains. Fishing and other recreational activities and the money they bring to local economies could be threatened if forests aren’t thinned, a new study concludes.

Visits to the forest

Arizona’s population grew 75 percent between 1990 and 2010 – and visits to the national forests grew even faster. The growth rate slowed after the recession, but still rose 13 percent between 2010 and 2017. Increasingly, the people who live in rural areas have found their economies linked to serving the recreational needs of people who live in the Valley. Some 80 percent of the Arizona’s population now lives in urban areas.

That means rural economies have become ever more dependent on serving the needs of those out of county visitors, whose numbers continue to grow.

Mostly, the National Forests have born the brunt of that increased use. Forest Service surveys provided a breakdown of the recreational use in each forest, showing that the recreational visits dwarf the population of any of the rural communities.

The Tonto National Forest reported 2.6 million visits, which compared to a reported tally of 4.8 million visits in 2008 – a decline the report suggested stemmed from a change in survey methods.

The Apache-Sitgreaves National Forests also reported a decline probably for the same reason, from 1.2 million visits in 2007 to 520,000 visits in 2014.

That means roughly 9 million people visit the three national forests each year, although the counties have a combined population of just 300,000.

Visitors to each forest enjoyed a different mix of activities. For instance, in heavily touristed Coconino County sightseeing and hiking accounted for 74 to 83 percent of visits. Activities like camping, backpacking, fishing and hunting each accounted for more like 1-5 percent of visits. The Coconino also had the largest share of visitors coming from more than 100 miles away – roughly 60 percent. That included not only the Valley but the world — with visits to Sedona rivaling the Grand Canyon.

However, in the more remote and lightly visited Apache-Sitgreaves National Forests — fishing accounted for 38 percent of visits. The top activities still included walking, hiking, relaxing, sightseeing, driving for pleasure and viewing wildlife — all coming in at between 38 and 59 percent.

In the Tonto National Forest, which includes a chain of lakes on the Salt River on the outskirts of Phoenix, visitor’s activities varied even more widely. Hiking and relaxing accounted for only 22 to 29 percent of visits.

However, off-road vehicle use accounted for 32 percent of visits, fishing for 18 percent, water activities for 36 percent, and viewing wildlife for 25 percent. The totals may add up to more than 100 because people do several things on a single visit.

Overall, local residents – those traveling less than 25 miles – accounted for between a one-fourth and one-third of the visits to the three forests.

How will thinning affect recreation?

So what’s all this got to do with the 4FRI plan to thin and burn roughly 1 million acres in the Rim Country and the White Mountains in the next 20 years? Won’t a bunch of logging projects, hundreds of miles of new temporary roads and smoke from controlled burns interfere with recreation throughout the region? 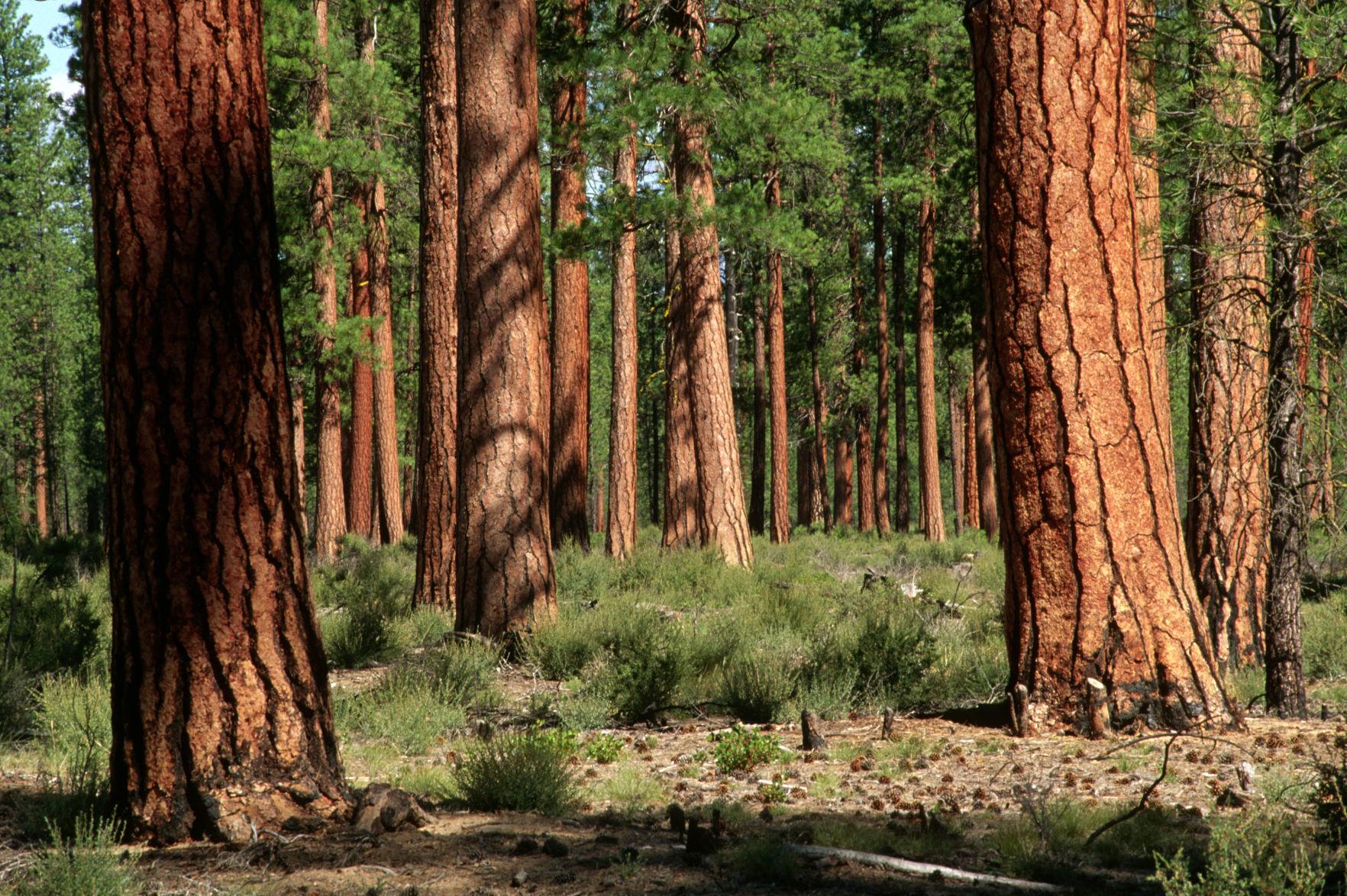 Well, yes. But only for a little while.

Right now, about three-quarters of the 1.2-million-acre study area remains vulnerable to high-intensity crown fires. The project could reduce that vulnerable area to 10 or 20 percent of the forest. A low-intensity fire has little impact on recreational use of the forest.

Bear in mind, most of Arizona’s wildfires are started by people. So as the number of visitors increases — the odds of a devastating wildfire will also increase. The Forest Service has responded by closing the forest during the worst of the fire season — but that costs the local tourist economy dearly. The report estimates that the number of visitors to the forest will rise with the population. Projections suggest visits to the Coconino Forest alone will grow by an additional 340,000 by 2020. If the forest were thinned, fires would pose much less danger.

Moreover, a high-intensity crown fire can drive away visitors for a decade or more – assuming the forest ever recovers at all. Wildfires on Four Peaks destroyed most of the ponderosa pine forest there, with little return of ponderosas since. In many areas charred by the Rodeo-Chediski fire, pinyon and juniper have replaced the ponderosa.

“The threat of uncharacteristically severe wildfire continues to increase with ongoing, un-managed growth of vegetation,” concluded the EIS. “Uncharacteristic wildfire would severely impact recreation values and experiences in the project area.”

The report noted that virtually all recreational facilities are closed for months or even years after a high intensity fire. Often, those high intensity fires leave behind forests of dead snags, which topple unexpectedly for years to follow. Some areas burned by the Rodeo-Chediski fire remained close to recreation for seven years, for fear of injury to visitors when the snags fell. Those toppling trees can also repeatedly block trails for hikers, bikers and riders over a period of many years.

The study area has hundreds of miles of prime trails, including many of national significance. That includes some 130 miles of the Arizona Trail, the 100-mile-long stretch of the General Crook National Recreation Trail and some 44 miles of the Highline National Recreation Trail. All could be heavily damaged and eroded by the kind of high-intensity wildfire the project is designed to avert. All told, the study area has some 800 miles of developed trails, all vulnerable in a region where hiking is the top draw for visitors.

One study in New Mexico found that crown fires in 2006 caused such a steep drop in use of hiking trails that it cost the local economy $52 million in lost output and 1,240 jobs.

Moreover, a lot of recreational activity focuses on streams and lakes. Those areas remain especially vulnerable to recreation-deterring damage from a high intensity fire.

The 4FRI preferred alternative includes restoration of some 777 miles of streams and 184 springs. So the project would not only prevent wildfire from driving visitors away from the entire forest, it would also improve experiences in the most popular and endangered habitats.

The report concluded, “(I)n the long term, the proposed action will support the health and safety of recreationalists and surrounding communities, as well as reduce potential effects on water supplies, utilities and other infrastructure within and adjacent to the project area.” 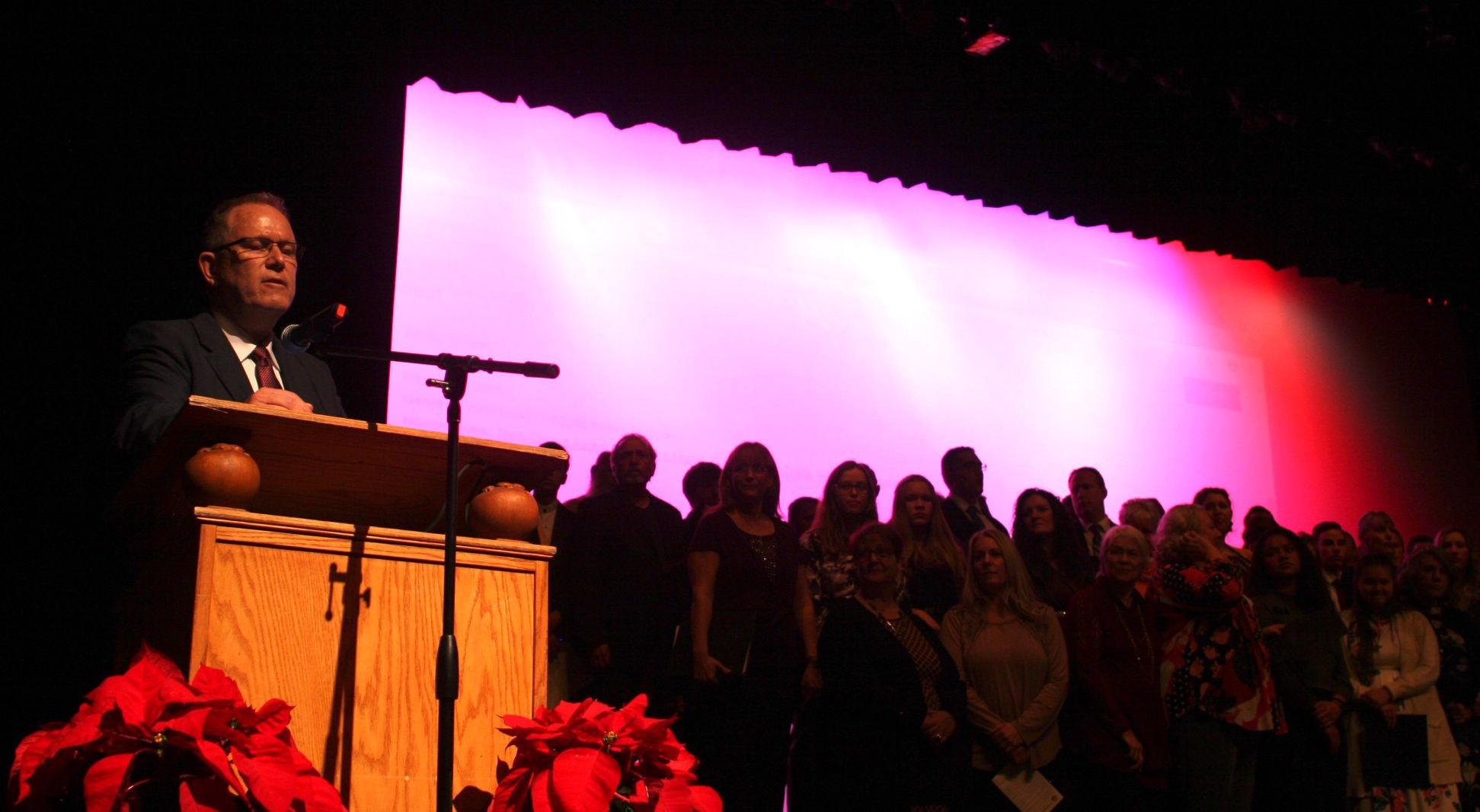 Show Low Mayor Daryl Seymore shares closing remarks with the audience during the 7th Annual Community FAST Celebration on Sunday, Nov. 24 in the Show Low District Auditorium. In the background is the Combined Interfaith Choir who sang “God Bless America” along with the audience. The choir was directed by Pat Peterson with Diane McBride on piano.