Images from the Backbone Fire demonstrate the dedication and hard work of firefighters. 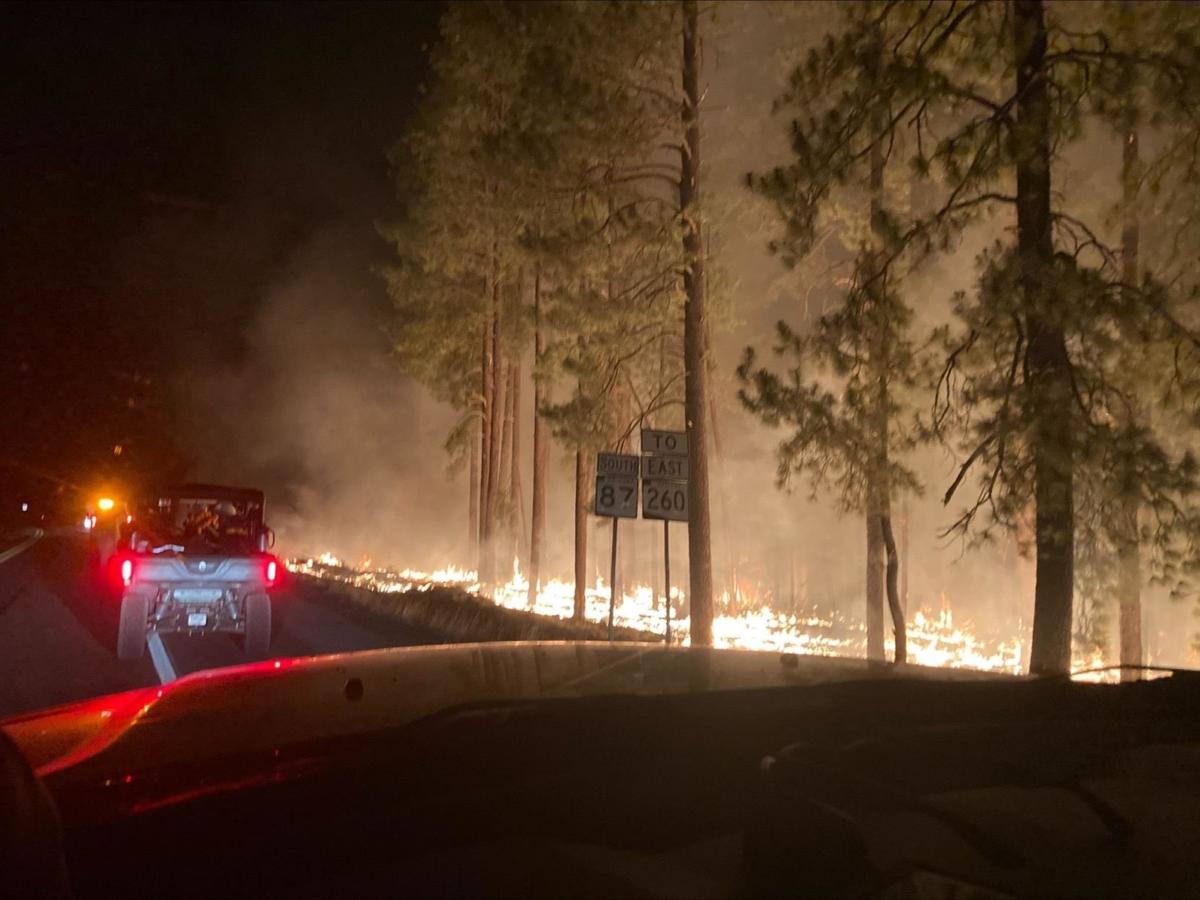 The lightning-caused Backbone Fire located roughly 12 miles west of Pine and Strawberry has reached 38,328 acres and 1% containment with 590 people assigned to the fire.

Images from the Backbone Fire demonstrate the dedication and hard work of firefighters.

The lightning-caused Backbone Fire located roughly 12 miles west of Pine and Strawberry has reached 38,328 acres and 1% containment with 590 people assigned to the fire.

The Forest Service has shut down forests all across Northern Arizona and the Navajo County Board of Supervisors has declared an emergency as fires spread and communities evacuate.

The Coconino and Kaibab forests closed on Wednesday, the Apache Sitgreaves on Thursday and the Tonto National Forest on Friday. The closure orders bar visitors from getting off main roads in any of the forests and come with stiff fines for violators.

Scattered thunderstorms finally brought moisture to some areas on Tuesday, providing the first break in a week for struggling firefighters who have been losing ground daily to new fire outbreaks in a desperate fire season that has already charred hundreds of thousands of acres.

The Navajo County declaration will make the county eligible for state and federal assistance. Ironically, the county has done nothing to reduce the long-term danger that remains under its control. Neither Navajo or Apache counties have embraced Firewise or Wildlands Urban Interface (WUI) building codes, which would greatly reduce the chance the wildfires now plaguing the region will destroy forested communities.

The Navajo County declaration focused on the 7,000-acre Wyrick Fire, which has forced the evacuation of portions of Heber and Overgaard. The declaration will make it easier for the county to receive state and federal disaster funding for the substantial costs imposed by the wildfires and the evacuations.

Burning fiercely about seven miles northwest of Heber, the fire’s showing “extreme” behavior and throwing embers more than a quarter mile ahead of the fire line. WUI and Firewise codes are intended to prevent such embers from setting whole blocks on fire.

Residents of Heber and Antelope Valley east of State Route 260 and north of State Route 277 have been ordered to evacuate, while the rest of Heber remains on “set” status — prepared to evacuate on short notice. A shelter has been established at Holbrook High School, with a shelter for animals at the Navajo County Fairgrounds.

The region received scattered showers on Tuesday and Wednesday after days of unrelenting, record heat. The forecast calls for the return of hot, dry conditions over the weekend — but offers another chance of rain on Tuesday.

In the meantime, fires continue to burn throughout the region — fanned by the hot, dry winds that have bedeviled firefighters for the past two weeks. The extreme drought, dry winter and spring and now record temperatures have driven fuel moistures down to 3% and produced extreme fire behavior.

The forest closures will reduce the chance that an illegal campfire or carelessly discarded cigarette will spark another blaze. Moreover, getting people out of the forest will reduce the chance they’ll get caught by another, fast-growing fire. Already, fire crews have had to scramble to evacuate campers to escape several recent fire starts — including the popular Woods Canyon Lake.

People with private property can still travel to their property, but all other visitors are barred from being in the forest.

“More than two dozen fires have started on the Apache-Sitgreaves National Forests in the last few days,” the Forest Service said in a release issued on Wednesday. “Fire behavior has been extreme, with crowning, torching and long-range spotting, threatening lives and property. While sporadic precipitation may fall in areas of the forest cover the coming weeks, this closure will remain in effect until fire activity decreases, sufficient precipitation falls to reduce the risk of wildfire and hot, dry conditions are no longer forecast to continue.”

The Forest Service on Thursday asked any campers and visitors they could contact to leave immediately and urges the public to make no plans to visit the forest for the next several weeks.

Violation of the closure orders comes with a fine of up to $5,000 for an individual or six months in prison or both. Organizations could face a fine of $10,000.

The region’s fire resource score has risen to Level 5, which means all fire resources are fully committed with nothing in reserve. Fire commanders have been forced to triage, for lack of resources. This means instead of attacking the fire on all fronts and calling up air resources when needed, they have focus on protecting key resources like homes, communications arrays and power lines.

Meanwhile, the Bear Fire some 10 miles south of Hannigan Meadows has blown up to 7,300 acres. Lacking the resources for an all-out attack, crews on the Bear Fire are concentrating on protecting key infrastructure — including Highway 191, cabins and residential structures. Highway 191 is now closed from mile marker 190 to mile maker 224.8.

Other nearby fires continue to grow as well, including the Horton Complex (4,300 acres), and the Hobo Fire (400 acres).

The Backbone Fire remains the most dangerous fire in the state right now. It now stands at some 37,000 acres, after consuming all of the iconic Fossil Creek Canyon — which normally draws about 100,000 visitors annually. The fire has forced the evacuation of thousands of people from Pine and Strawberry, but the 442 firefighters have so far kept it from entering the abandoned communities. The fire still poses a possible threat to Pine, Strawberry, Camp Verde and Payson.

The air tankers and helicopters working the Backbone Fire have prevented two other fires from lurching out of control — at least for now.

Resources diverted from the Backbone Fire rushed to the West Chev fire 13 miles from Forest Lakes after a lightning start on Saturday.The Chev Fire was listed as 300 acres on Tuesday, with “moderate” fire behavior that included “wind-driven runs.” The fire forced the closure and evacuation of Woods Canyon Lake and other areas along the Mogollon Rim.

Air Tankers and helicopters diverted from the Backbone Fire also helped limit the spread of the 71-acre Snake Fire, which started on Monday morning about seven miles from Clint’s Well on the edge of West Clear Creek. As of Tuesday morning, the fire was still just 45 acres in extent — but spot fires had made their way into West Clear Creek — which could lead to a major spread.

Meanwhile, the 24,000-acre Rafael Fire four miles north of Perkinsville has been growing rapidly on the Prescott National Forest. Half a dozen communities have been put on evacuation alert. The 800-acre Rock Buttes Fire is burning nearby.

Most of the fires have far fewer firefighters and resources on hand than the threat to communities or the dangerous fire conditions would normally demand. In addition to the explosion of fires in Arizona, California, New Mexico, Colorado and Utah have also lurched into a major fire season much sooner than usual, thanks to what may rank as the most severe drought in 1,000 years, according to tree ring studies.

Despite the steady rise in major wildfires in Arizona in the years since the Rodeo Chedeski Fire nearly destroyed Show Low, neither Navajo County nor Apache County have acted to reduce fire danger locally. Fire conditions right now are more dangerous than those that turned the Rodeo Chedeski Fire into the second largest in state history — second only to the Wallow Fire, which also burned through the White Mountains.

Neither Apache nor Navajo county has a Wildlands Urban Interface building code, which reduces the chance that embers produced by a wildfire within a mile of a community could set several houses on fire at once. Studies in places like Paradise California show that ember storms from a fire a mile away can set multiple houses on fire at once, overwhelming firefighters. The fires then spread readily from house to house — often cutting off evacuation routes.

None of the incorporated communities in the White Mountains has adopted WUI building codes for new construction, despite studies showing they face a greater wildfire danger than did Paradise, where a wildfire moved so fact that it killed more than 80 people before they could flee.

Moreover, none of the counties or cities in the region has adopted Firewise codes, which require homeowners to keep brush and trees away from houses. Studies show the deadly impact of trees that drop pine needles on roofs and brush up against houses that can catch on fire and set eves of homes aflame. Brush and trees against homes and between homes can readily spread flames through an entire block. Even one vacant lot choked with brush can in an ember storm set all the nearby homes on fire.

About time they shut it down

Excellent reporting on a daunting, tragic situation in our beautiful state that's burning up before our eyes. It's way past time for everyone to "wake up and smell the smoke"...cannot believe how awful it is that the counties, communities and citizens have not banded together to implement FireWise standards that could well help avert the inevitable tragedy that's likely headed our way. Sitting ducks!

There are negatives and high expenses involved in the enforcement of the WUI building codes that should be discussed before they are forced on everyone and taxes and home building prices go up accordingly.