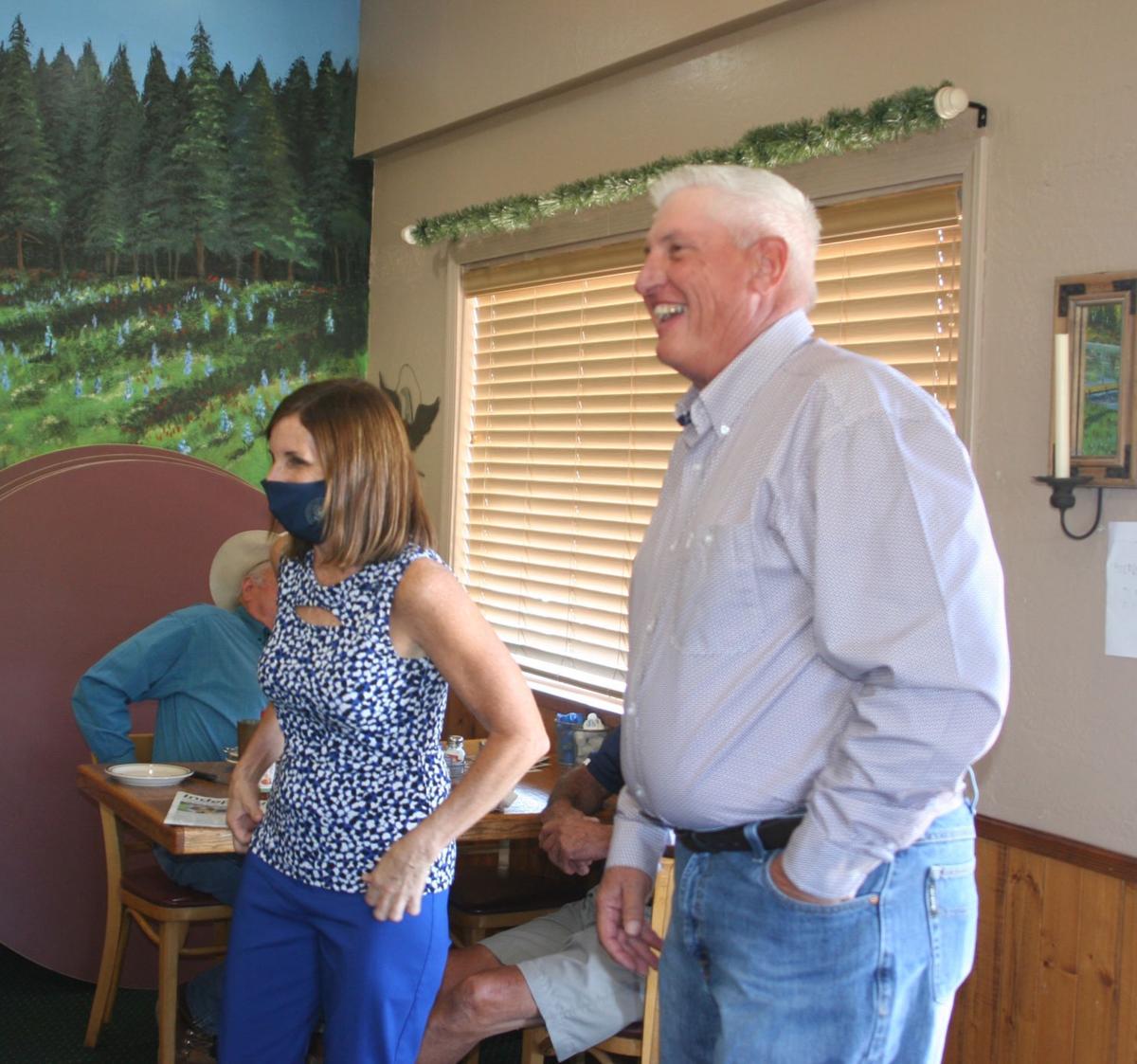 U.S. Senator Martha McSally, (left), and Show Low Vice Mayor Mike Allsop welcome the crowd gathered in Show Low Cafe on Friday, Aug. 14. “We have to win this country back but I can’t do it by myself,” said McSally to her constituents. “We have to make sure that Trump wins Arizona strongly. This is about freedom and the fundamentals that our country was founded on.” 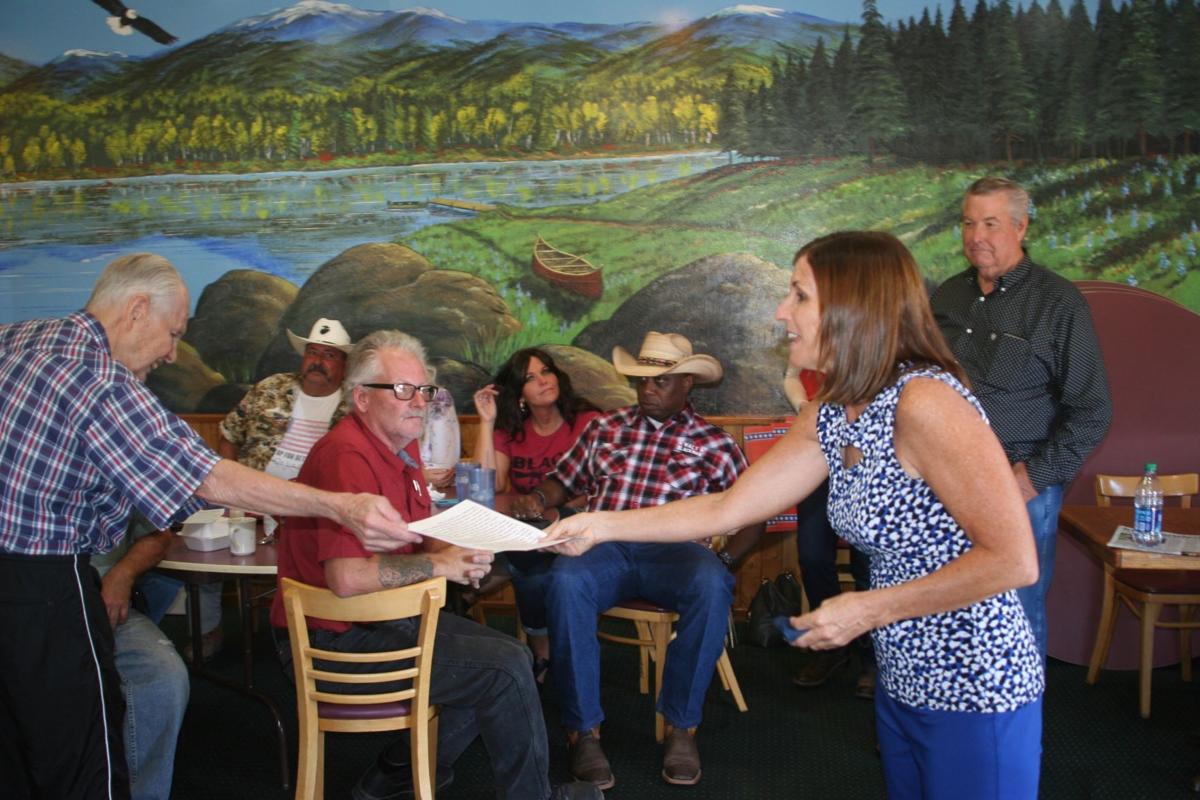 Apache County Republican Party second vice chairman, Mike Humphrey, (left), hands information to U.S. Senator Martha McSally during her Friday visit to Show Low. ‘If Trump loses the election, this country will turn into a marxist, mob rule, socialist, dictatorship,’ Humphrey said. ‘We will lose all our freedoms, our constitution, the right to bear arms and our way of life.’

Her first stop was Show Low Cafe, where she was welcomed by a restaurant full of supporters and community members. The crowd was full of questions and eager to hear how the Arizona Senator and the Republican party will campaign in the 81 days leading up to the general election in November.

Congressional District 1 candidate, Tiffany Shedd, spoke before McSally arrived. She was followed by Show Low Vice Mayor Mike Allsop who said, “This is a lady that will fight for us,” of Senator McSally.

McSally, who stands close to five feet tall, had no trouble making her platform, her beliefs and her priorities known right out of the gate.

“I spent some time with reflection and prayer and what we need to do going forward between now and the election,” she said. “COVID-19 is the first 2020 challenge that we’ve had. So, my words for 2020 are peace, joy and gratitude.”

She then turned back to the immediacy of the coming election and the need for Republican voters to make every effort to speak openly to their neighbors and the community about the issues and the sheer necessity of voting in November.

“It’s an honor to be with you today because we are on the verge of a great American comeback,” said McSally. “We have 81 days to save the country,” referencing the number of days until Nov. 3. “This election will bring generational impact.”

She shared four points she feels are at the crux of this campaign — the economy, the military, border security and judges.

“Under President Trump, we have the strongest economy that we’ve seen in our history,” said McSally. “And that wasn’t by accident it was through conservative policies like cutting taxes and deregulation.”

“There is a positive vision for the future but we’ve got to turn it around by bringing manufacturing home from China,” she said. “For example, there are 200 medications we are short of in the US. Lidocaine is one of them and these drugs are being made by our adversaries.”

“The Democrats want to slash our military,” she said, sharing her personal experience in the military. “Under the Obama administration, our military was cut 25% at a time when threats to our country were growing. We had Marines looking for airplane parts in museums. We were decimated for readiness against national threats. Under President Trump, we are investing in our military and doing what we need to do.”

When it comes to border security, McSally spoke about the recent completion and commemoration of the two hundredth mile of the border wall.

“Despite the wall being built, we still have drugs, illegal immigrants and sex trafficking taking place,” said McSally. “Border security is a public health issue; borders matter when you are trying to protect America.”

If Biden wins the election, McSally says he will open the borders and American citizens will have to pay for healthcare for all illegal immigrants.

In reference to her own work on these four issues, McSally said she tied for the most bills signed into law according to the govtrack.us/congress. She introduced 46 bills and resolutions in 2019.

“Our economy, the military, veterans, border security and judges — these things matter,” said McSally. “A drought contingency plan here in Arizona and giving access back to local communities for economic development is also important. It literally takes an act of Congress to get this done and I have accomplished five of these things.”

McSally spoke in favor of care for veterans and veterans treatment courts as a valuable program to help some who suffer with Post Traumatic Stress Disorder (PTSD) and depression and addiction to “get their lives turned around.”

She said that such programs allow veterans to come back home after war to heal by making them accountable through the help and support of other veterans.

McSally’s take-away message was, “As of today, August 14, we have 81 days to save the country. We are at the tipping point. This is about saving our fundamental liberties and our way of life. The stakes are high even if Trump gets re-elected. We need to talk to our friends, our neighbors, our community and make sure everyone understands the importance of this election.”

“We are on the verge of Democrats flipping the house and the senate. We’ve got to hold the line,” said McSally in closing.

The Senator, after her time in Show Low, was heading to Snowflake/Taylor then onto several places in Apache County.

Shedd is a national resource attorney that belongs to a fourth generation farming family in Pinal County. She cited forest health, natural resources, healthcare and border security as some of her priorities.

“Whether it’s over regulation on farmers or lack of access to healthcare, I have felt some of those same issues,” said Shedd. She also spoke about her opponent, incumbent Tom O’Halleran.

“97% of the time Congressman O’Halleran votes with Pelosi and his votes in Washington D.C. are against things like rural broadband. What he says and what he does are two different things,” said Shedd.

Humphrey candidly shared his thoughts with McSally and the crowd saying, “If Trump loses the election, this country will turn into a marxist, mob rule, socialist, dictatorship. We will lose all our freedoms, our constitution, the right to bear arms and our way of life.”

“ ... we have 81 days to save the country. We are at the tipping point. This is about saving our fundamental liberties and our way of life."

“Border security is public health; borders matter when you are trying to protect America.”

Actually Martha McRino, You had months to debate your primary opponent 7 times, but you refused because you knew youd lose. So now in the General, if you make it that far without being indicted first, you will lose to Kelly in a very close election. Just leave and oh yeah, DON'T WRITE

81 days to save the country from you mcsally. You have no spine and you have no honor.

[thumbup][thumbup] Snotamer & pioneer family. There is not enough gold in the universes to make me vote for McLiar or Trumpl So much bs from her and most of the other repubs. Go away!!

MAGA and Dump Trump is right. We have less than 80 days to make sure that bafoon goes back to the Zoo he came from.

It will be such a relief to the people when Trump wins! The silent majority is getting louder, and even the dems are waking up! Trump 2020!

You are neither silent or the majority. Your group are the loudest bunch of people there is. The majority in not 30% of the the voting Americans...last time I checked 70% percent is the majority to your 30...even if you inch up to 49...you're still the minority. Your electoral college win will not happen again. When the Dems take back the Senate and Presidency the electoral college will go away so the minority will never again have a stranglehold on American citizens.

And Arizona and all of the other "flyover states" will never ever see another presidential candidate nor have any say in the election of a future president. The west coast and the east coast have such a majority of the population, they alone will determine who wins the election.

The Electoral College is part of the Constitution. Eliminating it requires amending the Constitution. A Democratic House and Senate can propose such an amendment but it must be ratified by at least three quarters of the states. It would take only thirteen refusing ratification to block the amendment indefinitely. The Electoral College gives low population states more power than they would have in a direct election. I can't see any of them cutting their own throats by ratifying an amendment to do away with it.

Hummm, Let's see now. In Feb.2015 Martha McSally voted in H.R. 596, vote # 58, for the full repeal of the Affordable Care Act (Obamacare) which would take away Pre-Existing Conditions protections from 129 million americans, including 17 million children. Her vote would also have the effect of re-opening up the Medicare prescription drug "Doughnut Hole" and doing away with free preventative care tests for for those on Medicare. Young adults would not be able to stay on their parents insurance plans up to the age of 26. McSally's vote would also allow insurance companies to put a cap as to the "Maximum Amount" insurance companies would pay for all benefits. That's how she returns your trust in her. Don't listen to what she says, listen to what she does. McSally's other votes to take away pre-existing protection coverage include H.R.3762, vote #6, H.R. 3762 vote # 53, H.R. 1628 vote # 256

The voice of reason in a sea of lemmings. Thank you for putting the facts out there.

Why send McSally to Congress? Just give her vote to Trump and take our chances? She wouldn’t stand up to him if he wanted to put everyone in Arizona that wouldn’t bow down to him behind bars! She is all about party before Country. Oh, by the way, she lies too.

Dear Martha, I love you but you voted to fund, along with Loosey Ducey, an illegal immigrant shelter in Arizona near as I can tell. Pro-Life organizations are targeting you as anti Life Begins at Conception. I've been told you've had your challenges and have overcome many difficulties, but the Lord cannot stand abortion. I knew you were in town. My house is on your flight path. We don't get very many Business Regional jets here. I wouldn't want to confront you, but I do want to admonish you for weaknesses in your platform.