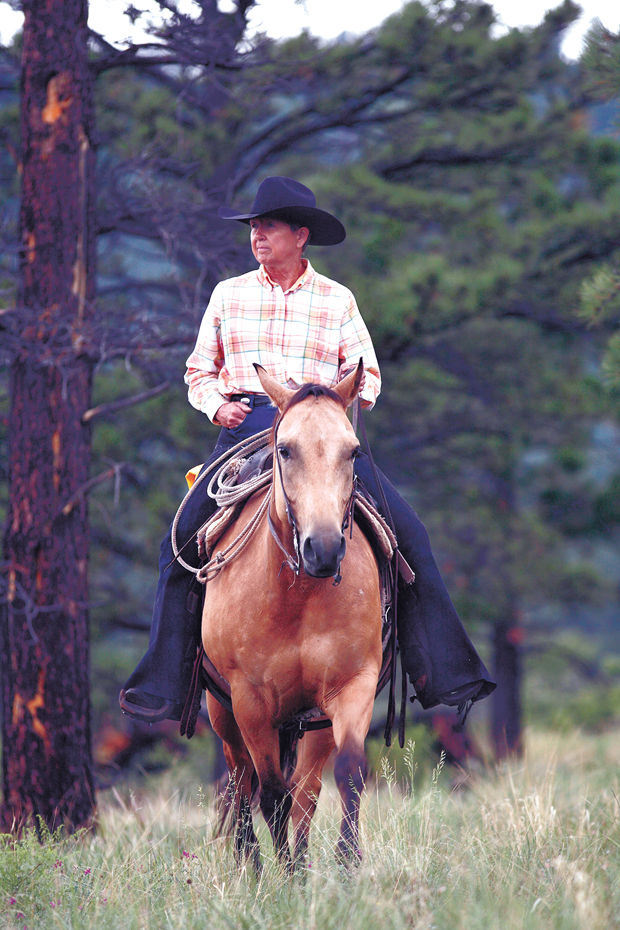 Wink Crigler rides a horse around her property at the X Diamond Ranch near Greer. Curator of The Little House Museum in the White Mountains, she will be joining the ranks of Arizona Historymakers. 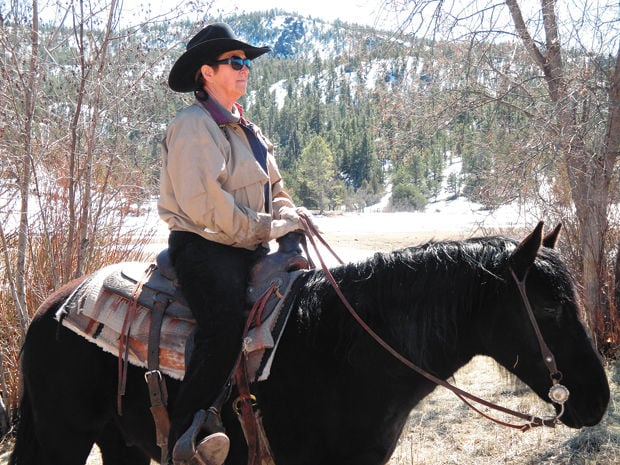 File photo Wink Crigler rides a horse around her property at the X Diamond Ranch near Greer. Curator of The Little House Museum in the White Mountains, she will be joining the ranks of Arizona Historymakers.

Wink Crigler rides a horse around her property at the X Diamond Ranch near Greer. Curator of The Little House Museum in the White Mountains, she will be joining the ranks of Arizona Historymakers.

File photo Wink Crigler rides a horse around her property at the X Diamond Ranch near Greer. Curator of The Little House Museum in the White Mountains, she will be joining the ranks of Arizona Historymakers.

APACHE COUNTY — Wink Crigler, owner of the X Diamond Ranch and curator of The Little House Museum in the White Mountains, will be joining the ranks of Arizona Historymakers.

The Historical League announced the 2017 Historymakers inductees at the Arizona Heritage Center in Tempe on Wednesday, Feb. 17.

The program honors outstanding living Arizonans for notable achievements in diverse areas including the arts, athletics, communications, education and entertainment, as well as community service and philanthropy, while maintaining their ties to the state.

“We are extremely proud to honor these truly special Arizonans,” said Patricia Faur, recognitions chairman, and Deb Hester, gala chairman. “Their achievements speak for themselves. They are true Arizona Historymakers and we are looking forward to honoring them next year at the Historymakers Gala.”

The inductees will be honored on March 4 at The Historymakers Gala, a fundraiser unique to the Historical League, which supports education and other programs at the museum at Papago Park. The 2017 event will be held at the Arizona Biltmore Resort.

Through biographies, portraits, oral histories, photos and memorabilia, the Historymakers’ life stories become part of the Arizona Historical Society Museum through archives and exhibits for Historymakers Hall and Historymakers Wall.

For more information on the program, go to HistoricalLeague.org.

A woman known as Wink

Crigler grew up on and continues to operate the X Diamond Ranch near Greer. She founded and is the curator for the ranch’s Little House Museum, which displays artifacts from the Old West.

She was recognized as Arizona’s top ranch manager in 2011 and was named as an Arizona Culturekeeper by the Arizona Historical Foundation in 2012.

She is highly respected for her contributions to conservation planning, resource and livestock management and community service, the program noted.

As her lifetime friend and neighbor, Sam Udall, has remarked, Crigler is “truly a cowman, and can outwork me any day. I’d just as soon work cattle with Wink as any man I know. And she is ever and ever and always the lady.”

Crigler comes by her grit and her cow sense naturally. Her grandmother, Molly Butler, came to Lee Valley in the early 1890s with her parents, Ellis and Hannah Wiltbank. By the age of 6, Molly could handle a team.

In 1908, she married John Butler and they expanded the family’s ranch operation. In addition to running cattle with the MLY brand, they built Molly Butler’s, Arizona’s oldest guest lodge, in Greer. Molly ran the lodge, and John worked as a guide and outfitter for the likes of Zane Grey.

When John Butler died in 1940, Vince and Helen Butler bought the MLY, which they operated until Vince died in 1991. Crigler and her sisters were raised on the ranch, a paradise of live streams, mountain meadows and ponderosa pines.

At that time, she took over the management of her mother’s portion and her own. Their partnership ended with the death of her mother in 1995.

Crigler’s goal was always to restore the ranch as it had been when John and Molly Butler owned it.

“In the spring of 2000, the cards took a turn,” Crigler said. “My sister ‘Stig’ and I, who had formed a joint partnership, had an opportunity to begin acquiring property that had been lost to the family.”

Wing and Stig were able to buy back part of the original ranch from the Rocky Mountain Elk Foundation that had acquired it.

“They were very supportive of the idea of bringing a 100-year-old property back together,” Crigler said.

The next step was to sign a cooperative agreement with the Arizona Game and Fish Department for grazing lease programs as part of the historic ranch properties. Then, in July, 2001, Wink and Stig, with the cooperation of the Forest Service, acquired the remainder of the original MLY grazing allotment on the national forest. They now have a patchwork of private, state and federal lands, and the historic ranch is now run as one operation. The old MLY is now run as the X Diamond.

It has taken a lot of hard work and unraveling of red tape to make it all come together. Because the country rises from 7,000 feet to 9,600 feet altitude, ranch management includes a planned restoration grazing program for their Herreford/Angus cross cattle, to accommodate both warm and cool season vegetative species.

Implementing her plan required more money than the cattle brought, so Crigler put the ranch to work in a variety of innovative ways. Her first project was the “Little House Museum” that she built in 1986 after her husband, Oscar Crigler, a horse trainer, died suddenly. It serves as a place to exhibit their trophies, to perpetuate the Butler family history and to interpret the history of the Upper Little Colorado River Valley.

In connection with her history project, Crigler has written two books on cowboy lore and history: “Beans on Things” and “Fadin’ Footprints.”

Thousands of visitors come every year for ranch rides, fly fishing in the trout stream, wedding anniversaries, camping, working on ecological restoration projects or just relaxing in the mountain air. On the second weekend in June every year, the X Diamond Ranch holds a cowboy golf tournament to benefit a local charity.

We are extremely proud to honor these truly special Arizonans. Their achievements speak for themselves. They are true Arizona Historymakers and we are looking forward to honoring them next year.