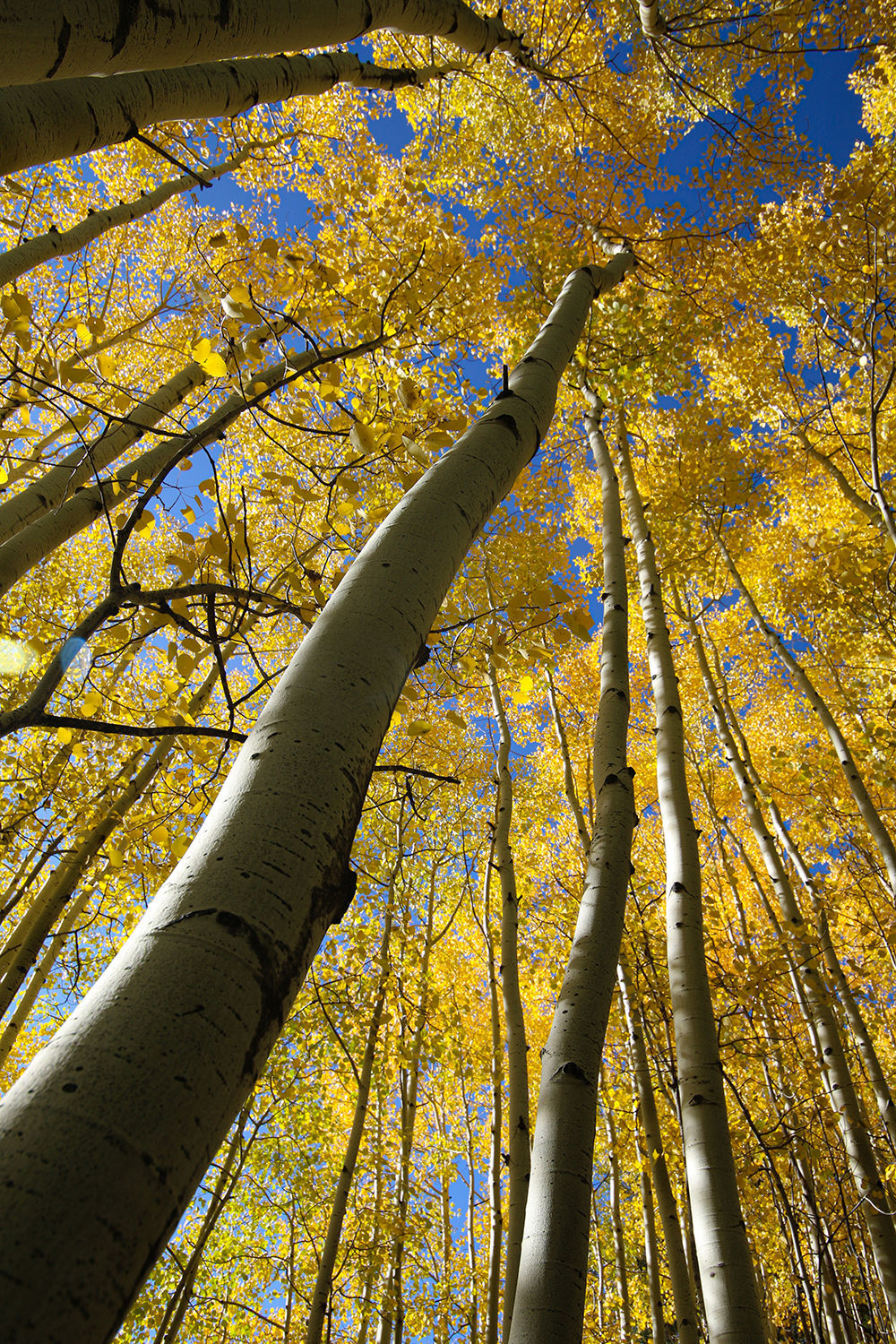 Aspen trees pan over some 138,000 acres in the Apache-Sitgreaves National Forest 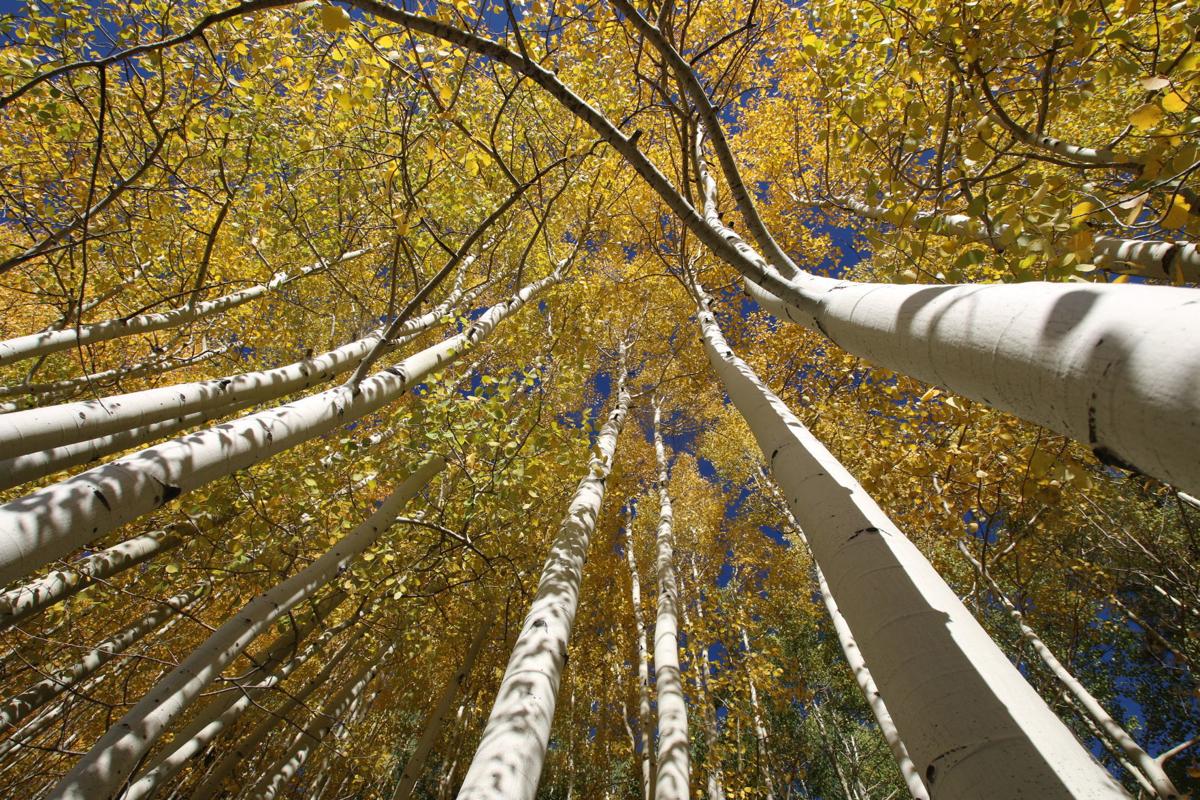 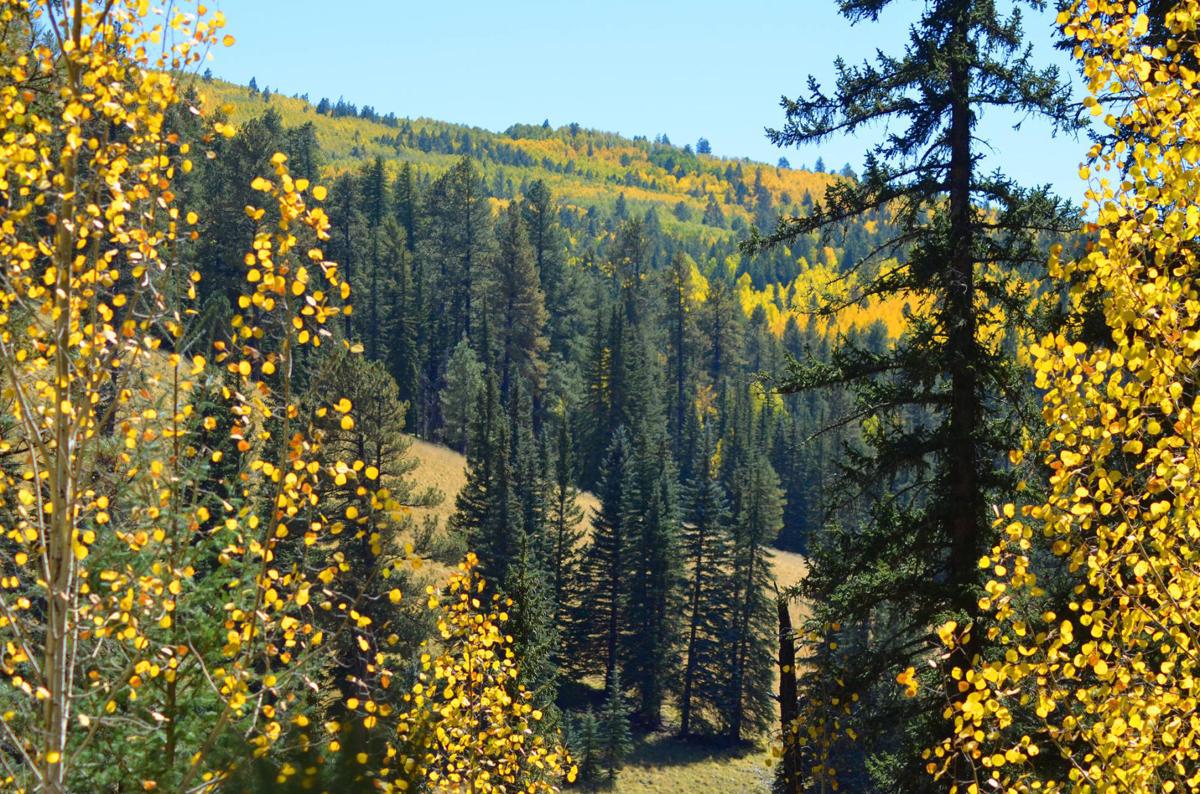 In the bright sunshine the yellow leaves of the autumn aspens shine brightly along Highway 273 on the way to Sunrise Ski Resort.

WHITE MOUNTAINS — It’s that time of year when the aspen come into their glory. The time when we can’t wait to drive up the mountain to experience their golden light, bold and splashy against the green background, yet somehow so elegant.

The development of fall’s golden hues in the aspen is driven by the same scientific processes that create fall color in all deciduous trees — chlorophyll and the length of the day. Chlorophyll is the chemical in the leaves that gives them their green color and produces food for the tree. In short, the trees that shed their leaves in fall are responding to the shorter days and longer nights.

Oddly enough, fall’s brilliant hues are created by chemicals in the leaves that are always there, but can’t be seen until fall.

“Come fall, as the days start to get shorter, chlorophyll tends to die off, it needs sunlight to keep the process going. As chlorophyll dies in the leaves, these yellow and orange colors start to emerge,” explained Fuller.

According to Fuller, there are 138,000 acres of aspen trees across the Apache-Sitgreaves National Forests to enjoy during the fall, and the trees are pretty healthy. Quaking aspen (populus tremuloides) are an adaptive, versatile tree that ranges from Canada in the north all the way down to our White Mountains. Aspens can live as long as 175 years.

Their name stems from the silvery backside of their summer leaves, and how they rattle in the breeze.

“When they move in the wind, they look like their shaking,” Fuller said.

Along with their golden fall hues, aspen are known for their silvery-white bark, which adds to the trees elegance. In aspen, the bark is not a tough, protective husk as it is in many other trees. It’s more like skin, tender and easily damaged.

Most everyone has seen an aspen trunk that carries someone’s initials on it, like a tattoo.

“Aspen bark is alive, it actually has chlorophyll in it … the elk tend to chew on it because it’s sweet, and people tend to carve on it,” Fuller noted. But he said, like a cut in the skin, damaging the bark allows access to disease and pests that can kill the tree.

Although aspen trees may seem a bit delicate and mild-mannered what with their name and their thin bark, they are not the tenderfoot of the forest.

Aspen trees show their tough side after a wildfire has ravaged a forest. Called a pioneer species, aspens are the first trees that will sprout from the burned landscape, holding down the soil and creating useful habitat for elk, birds and small mammals. Aspen start the process of re-creating the forest by sprouting from remnants of their roots in the soil, that survive the fire.

The power of the aspen is especially visible on Escudilla Mountain, just north of Alpine. The mountain towers 10,000 feet above the surrounding landscape, but was terribly burned by the 2011 Wallow Fire. Now it is aglow with aspen thickets that blanket much of the former burned landscape. The aspens will help tend to the mountain for the next 100 years, holding the ponderosa and other pine, spruce and fir trees in their nurturing shade until these other species are large enough to build their own forest.

“It’s this pulse, this energy across the landscape. When you see these dynamics, it’s an expression of the living force,” Fuller said, exposing his poetic side.

Aspen trees are also among some of the largest living organisms on the planet. A grove of aspen in the Fishlake National Forest in southern Utah has garnered a lot of attention from scientists and nature lovers over the past few years when it was recognized as the largest living organism on earth. A single male aspen tree has reproduced from its roots 47,000 trees that cover 106 acres. Because the entire grove stems from one tree, it is considered a single organism.

The grove is known as “Pando,” Latin for “I spread.”

Fuller’s favorite grove of aspens is near Spruce Mountain, not far from Sunrise.

“When you drive through them, they take on this really surreal, ethereal color, yellow with the green spruce coming through, this diffuse light, you get yellow on the road. With just a little windy day and you get the aspen leaves coming down and it’s … a religious experience,” he said.