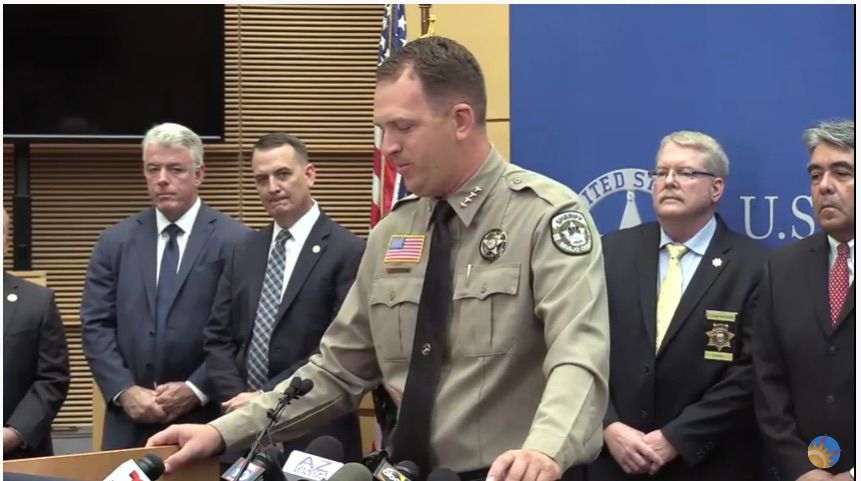 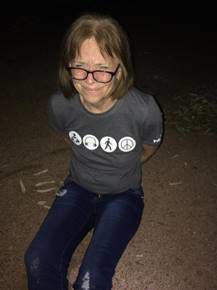 GILA COUNTY — A couple who are suspects in a Tucson murder that escaped a prison transport van on August 26 were captured Wednesday night in the Tonto Basin.

Blane and Susan Barksdale, whom local authorities had been searching for in Navajo and Apache counties for the past 16 days, were found hiding out in a residence near Punkin Center.

The US Marshals Service held a press conference at 11 a.m. on Thursday to offer some details to the public on the capture of the two fugitives. Officers from the US Marshals Service, Arizona Department of Public Safety, the FBI and Navajo and Gila County Sheriff’s and Tucson Police Department were present at the press conference to discuss the cooperative effort that led to the capture of the Barksdales.

The search for the couple had focused for much of the past 16 days on the remote area between Snowflake and Concho, as law enforcement followed up on tips and leads from the public, but all led to a dead-end until late Tuesday.

“I couldn’t tell you how many times we drove across the county,” said NCSO Chief Deputy Randy Moffit said of the search, which included agents from the US Marshals Service who worked with NCSO.

But on Tuesday, a tip phoned into the US Marshals by a member of the public urged them to focus on Punkin Center, in Gila County. The tip advised that the couple might be staying with an individual who was on parole for a drug trafficking offense, although the caller was not sure, officials said.

“When the operation moved towards Phoenix, we stayed in the hub with them … we just kept working with the Marshals and sent our Major Crimes Apprehension Team (MCAT) force out to work with them,” said Sheriff Clouse in a telephone interview Thursday morning.

The tip led to an operation Wednesday evening to surround a rural property with a modular home and several trailers. At least 50 officers from several agencies participated, include members of the Navajo County Major Crimes Apprehension Team. DPS offered air support with choppers hovering over the property.

The occupants of the house were advised to give themselves up. The unidentified property owner surrendered first, followed by Susan Barksdale, and finally Blane Barksdale.

As officers approached Blane Barksdale, 56, he is said to have become belligerent and was Tased and shot in the leg with a bean bag to subdue him.

The Barksdales are charged with a federal offense — unlawful flight to avoid prosecution. They were scheduled to appear in federal court yesterday, where those charges would be dropped, and the couple would be turned over to the Tucson Police Department to face murder charges.

Officials said the investigation was ongoing, and more details would be released at a later time.

The fugitives from justice escaped private company security guards in Blanding, Utah Aug. 26 while the guards were transporting them from Henrietta, New York, to Tucson as suspects in the first degree murder of 72-year-old Tucson resident Frank Bligh. Reports indicate the Barksdales were able to subdue their unarmed guards after Susan, 59, feigned nausea while the van was in Blanding, Utah.

Reportedly, they tied up the guards and one other prisoner with shoelaces and took possession of the van. The Barksdales then allegedly drove to Vernon where a friend there provided them with a red GMC pickup truck. They abandoned the van with their hostages unhurt.

The Barksdales may have been assisted by members of the white supremacist group, the Aryan Brotherhood, or perhaps the Hell’s Angels motorcycle gang, but this has not been confirmed.

Seventy-two-year-old Frank Bligh disappeared in April. Bligh’s home was set on fire, and his body has not been found. The Barksdales may have stolen as many as 100 guns from the residence. Brent Mallard, a nephew of Blane Barksdale, is being held in connection with the incident.

Blane Barksdale was placed on the 15 Most Wanted List on Monday, and a reward totaling $35,000 was offered for the arrest of the couple. Whether the reward led to their capture is unclear.

9/9/19 UPDATE: The U.S. Marshal Service announced on Monday Sept. 9 that Blane Barksdale was on their 15 most wanted list in the United States.

By what stretch of the imagination is Utah en-route between New York and Tucson? Someone needs to take a look at this so-called security company and how they pad the books!

Second, it says the charges for escape will be dropped and they will be turned over to Tucson on "suspects of murder"? What? They better have a rock solid case!