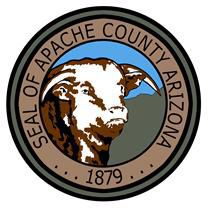 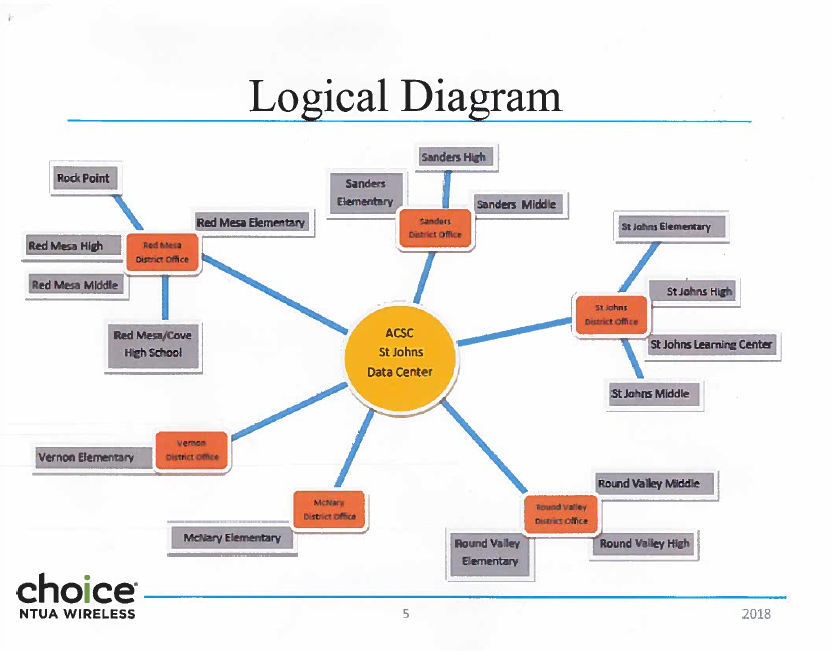 The diagram illustrates how the Apache County Schools and Business Consortium will connect the Red Mesa, Vernon, McNary, Round Valley, St. Johns and Sanders schools districts to the fiber optic lines that will be installed by vendor ATN International under the recently awarded special construction contract. The data center in St. John’s will be the initial hub for connectivity with lines running to the district hubs. The schools will then connect to the district offices.

The diagram illustrates how the Apache County Schools and Business Consortium will connect the Red Mesa, Vernon, McNary, Round Valley, St. Johns and Sanders schools districts to the fiber optic lines that will be installed by vendor ATN International under the recently awarded special construction contract. The data center in St. John’s will be the initial hub for connectivity with lines running to the district hubs. The schools will then connect to the district offices.

APACHE COUNTY — “Schools are the anchor institution and are the number-one most important customer in this broadband project,” said Apache County Schools Superintendent Barry Williams. “Schools get preferential pricing and the federal and state funding is for them,” he added.

Williams is leading the charge on a $7.75 million project to bring high-speed broadband internet service to the county. He and Alex Madrid, director of the Apache County Schools Business Consortium (ACSBC), have been involved in virtually every aspect of the project, keeping the key players in sync.

Apache County ACSBC will be the first entity to bring upgraded fiber optics for high-speed broadband services to White Mountain schools and libraries through the Arizona Broadband for Education project. The $11 million Arizona Broadband for Education Initiative is state-funded, however, state monies are being matched dollar-for-dollar with federal dollars to bring broadband fiber optic line to rural schools and libraries.

The funding breakdown for Apache County begins with 85 percent of the funds being awarded by the Universal Service Administrator (USAC) for E-rate programs. An additional 7.5 percent in funds are added by the state of Arizona. Finally, an additional 7.5 percent is added to the pot through a federal match of the state’s original commitment. The original 85 percent, plus two additions of 7.5 percent each, equal the 100 percent of project funds. This is how the schools and libraries are able to have construction completed with no out-of-pocket cost.

Navajo and Gila counties have formed a joint consortium which will be a project of considerable size and complexity as well. Apache County applied for funds earlier in the application window and received their funding letter of commitment from the federal government earlier than the Navajo-Gila county consortium. For this reason, Apache County may begin some phases of construction earlier than the Navajo-Gila county consortium.

The multi-million dollar project in Apache county includes the installation of fiber optic lines from the ACSBC in St. John’s, which will serve as a hub, to all five school district offices and laterals from the district offices to member schools.

A total of 174 miles of new fiber optic cable will be buried underground or run overhead via existing power poles or new poles that will be installed along the fiber optic path that has been carefully mapped out. Access to the easements, rights of ways, the geographic landscape and permitting requirements where the lines cross tribal, state and public lands will determine if cable is installed underground or above ground. Ninety-four miles of the total 174 will be on the Navajo Nation; which leaves 80 miles that will be run through other areas.

County staff with the ACSBC met with several staff members from a variety of departments within the United States Forest Service (USFS) on Tuesday, March 27, to discuss the next steps in the project. Special permitting will be required install cable on Forest Service lands. The meeting at Springerville Town Hall was to discuss how best to complete the SF299 application required by the USFS.

“Today’s meeting with the Forest Service was optimistic,” said Williams. “There are a number of hurdles and a time frame we must work within, however I feel we have an excellent start on the leg work.”

The “leg work” that Williams refers to is not just the SF299 application required by the USFS, but also the permits necessary to run the cable through the Navajo Nation, White Mountain Apache tribal lands and the Bureau of Land Management-controlled areas.

“This is a project that rates 9.5 on the scale of complexity,” said John Champagne, vice president of planning and development for ATN International. “The only thing that would make this project a 10 on the scale would be if we included the National Park Service,” he added. NTUA Wireless and Commnet were the companies awarded the contract for the installation of the network. (ATN International is the publicly-traded parent corporation of NTUA and Commnet.)

“To give you an idea of the scope of this project, we will be running fiber optic line from Red Mesa to McNary,” said Champagne who was also involved in the meeting with the USFS and other project stakeholders within Apache County.

System will go live next year

This means that schools within the Red Mesa, Vernon, Sanders, St. Johns, Round Valley and McNary districts could have connection to high speed internet as early as July, 2019.

The Arizona Broadband Initiative is structured in such a way to encourage vendors to run fiber optic lines that are big enough to carry above and beyond what is required for the schools and libraries. Although the lines will dead end at the schools and libraries, others businesses should be able to tie into the new fiber optic lines. The resulting broadband infrastructure projects will eventually allow rural communities to piggyback on the fiber optic lines. In the near future, many rural residential areas may also be able to connect to for high-speed internet service.

Schools and libraries not included in the initial contract and timeline for fiber optic connection are Concho, Greer and Alpine.

“This does not mean that they will be left out,” explains Wiliams. The Concho school district and Greer library had applied for funding on their own and then re-applied to become part of the Apache County Schools and Business Consortium. For this reason, they weren’t part of the original bid, however, they will most likely be able to be connected because fiber optic will run very close to their sites.

“When the crews run fiber, it will go from Pinetop to McNary, over the hill into Vernon and from there to Round Valley,” explained Madrid. “It’s all about timing,” he added. “Because the fiber will go through or near these areas, we have extension plans for those libraries in the Concho and Greer districts.”

The situation in Alpine is a little different. Again, Williams and Madrid stressed that the Alpine School District will not be left out. They will, however, be on a later timeline for connectivity because of the additional logistical challenges associated with the area.

“The cable companies could not get into Alpine because of the terrain and the substantial amount of land that falls within the Forest Service,” said Madrid. “We just couldn’t get it done within the July, 2019, completion timeframe due to the logistical difficulty and the time involved in the permitting process,” he explained. As a result, the vendors that bid on the project omitted Alpine, making the area part of a separate or split bid.

Madrid also explained that it was later it was determined that Cellular One could access the Alpine area to run cable. A possible path will be determined and another phase of the broadband project will follow behind Concho and Greer. “These areas are not being overlooked by any means,” explained Williams.

The libraries will follow suit and be connected soon after or, in some cases, concurrently, with the schools as part of the Apache County Schools Business Consortium.

174 miles of new fiber will be buried underground or run overhead via existing power poles or new poles that will be installed along the fiber optic path that has been mapped out. 94 miles of the total 174 miles will be on the Navajo Nation which leaves 80 miles that will be run through other areas that may also require special permitting.