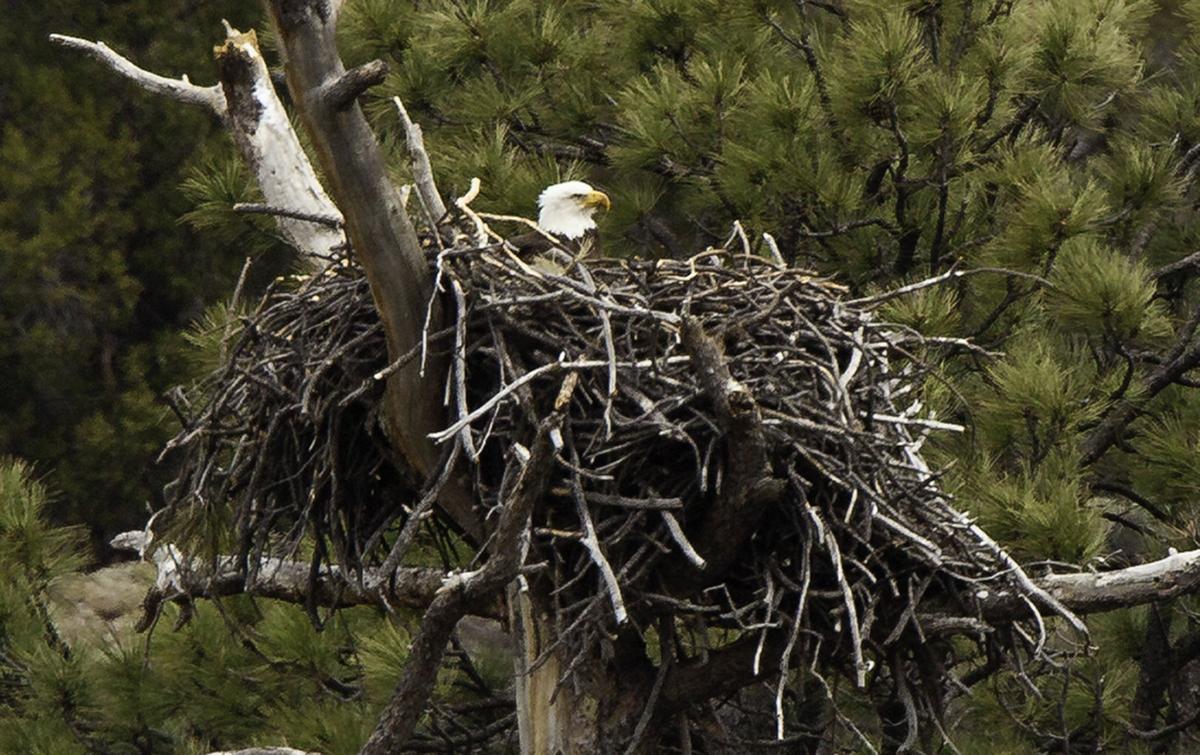 A pair of bald eagles near Show Low Lake returned to their nest after a small fire Tuesday came within 200 feet of the tree where the pair is nesting. The public is advised to stay away from the nesting area to avoid disturbing the eagles, causing them to abandon the nest. 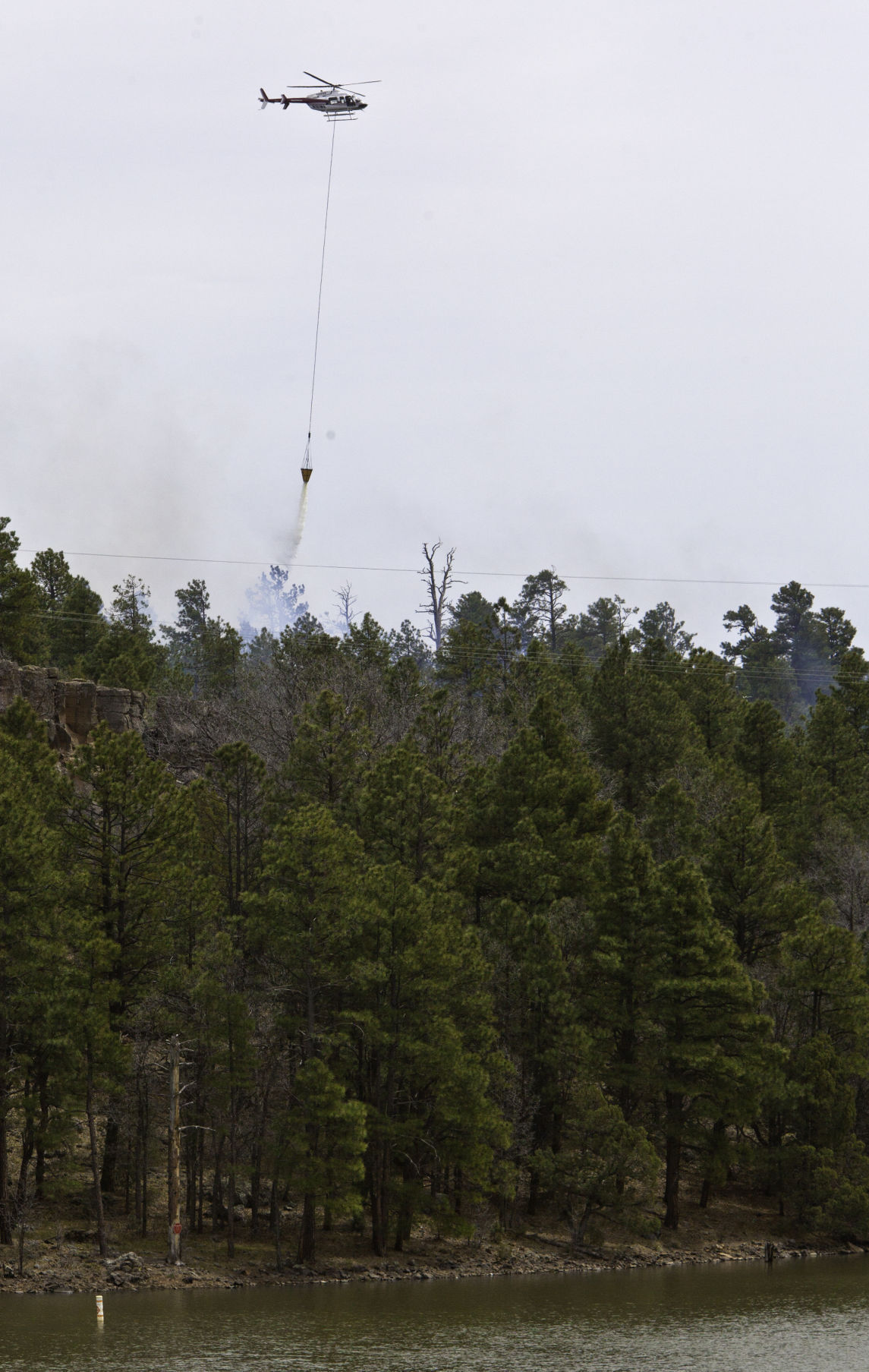 A Forest Service helicopter responded to the Lake Fire near Show Low Lake last April, to help extinguish a four-acre fire. A small fire about a mile from the site of last year’s burn was put out on Tuesday.

A pair of bald eagles near Show Low Lake returned to their nest after a small fire Tuesday came within 200 feet of the tree where the pair is nesting. The public is advised to stay away from the nesting area to avoid disturbing the eagles, causing them to abandon the nest.

A Forest Service helicopter responded to the Lake Fire near Show Low Lake last April, to help extinguish a four-acre fire. A small fire about a mile from the site of last year’s burn was put out on Tuesday.

WHITE MOUNTAINS — Two small fires that occurred in Eagar and Show Low in the past week may point to an early start to the fire season. Both Navajo and Apache counties have experienced abnormally dry weather for months now, and the dry conditions have elevated the fire risk across the White Mountain area.

According to the U.S. Drought Monitor updated Feb. 1, the White Mountain region is now in extreme drought. Long-range forecast models issued by the National Weather Service at the end of January show a continuation of the trend toward unusually warm and dry weather patterns through at least March.

That means that residents of the area and visitors need to be especially careful with fire. That message may not be getting enough attention, according to the staff at the Apache-Sitgreaves National Forest (ASNF).

“Last year there were 91 human-caused fires on the ASNF, that was the third highest in our Region (Forest Service Region 3 includes 11 national forests in Arizona and New Mexico). Fifty-three of the fire starts were from campfires, that is the second highest number in the Region,” said Liza Simmons, acting deputy public affairs officer, in an email to the Independent on Wednesday. The national forest with the highest number of fires originating from campfires last year was Coconino, Simmons said.

A human-caused grass fire Tuesday, Feb. 1, in Eagar was quickly put out by firefighters. “We’re not sure exactly how it started, but we are sure it was human-caused,” Eagar Fire Chief Frank Adams said.

The 10-acre fire that sparked up around 12:45 p.m. was in a field northwest of Fourth Avenue and Harless Road. Three homes were threatened, but no one was injured.

Adams said flames got to within about 100 feet or less from the homes before Springerville and Eagar firefighters brought it under control and then put it out.

“Chief Adams would remind everyone the fire season has arrived early this year and any mishandling of fire can result in property loss or damage from wildfires,” an Eagar Fire Department press release stated.

The Eagle’s Nest Fire near Show Low Lake burned only 1/10th of an acre, but was also started by a campfire. According to Simmons, the fire was called in around 9:30 a.m. on Tuesday by a citizen. Lakeside Forest Service engines and Timber Mesa Fire engines responded. Conditions were windy and dry, but they were able to stop forward progress fairly quickly, and the fire was fully contained by evening.

“The fire was caused from an abandoned campfire where the individuals just created their own rock ring. There was also lots of trash in the area,” Simmons said.

The fire ring was about 200 feet from a tree in which bald eagles are nesting. The eagles were seen back on the nest Wednesday morning by a volunteer.

Last year a fire started near Show Low Lake in April that burned 10 acres before it was extinguished with the help of a helicopter. That fire burned about a mile from the location of yesterday’s fire.

The Forest Service’s wildfire helitack squad and chopper will not arrive in Springerville until April.

I sure hope the towns here in the White Mountain Region that lie near the Apache Sitgreave forest put pressure on the forest service to SHUT DOWN the FOREST NOW!! Look it is really dry and the flatlanders are coming to light fires and walk away. Lets be proactive not reactive. Local business owners are not hurting much honestly go speak with them.
If the forest burns to the ground the business will be hurting for sure. Shut the forest down.

So that means shut it down for everyone not just tourists right?