Lining up at Torreon to begin the annual White Mountain Hospice Foundation Golf Tournament only happens for you if you signed up in time. Sold out is good for the cause because it is their only fundraiser of the year. 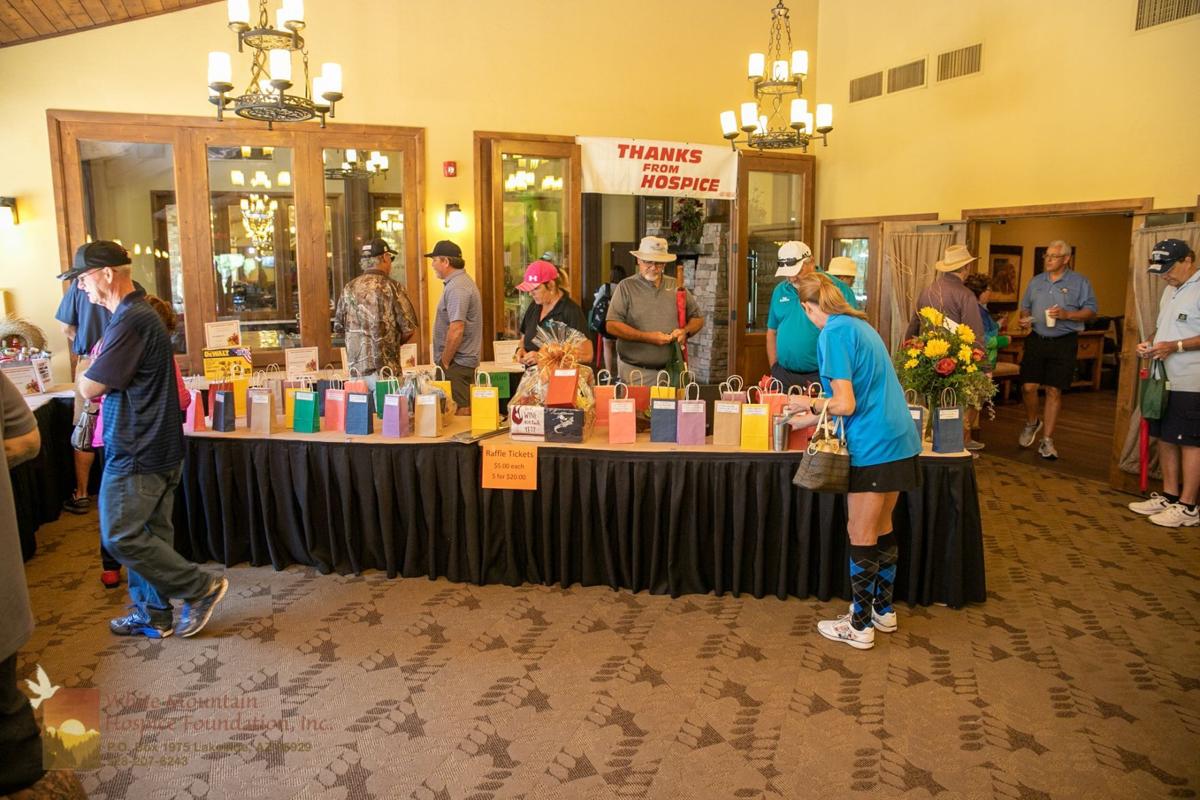 Making sure the golfers for the annual WMHF tournament know they are appreciated, board volunteers go the extra mile because monies from the event take care of a number of needs for the terminally ill and their families on the Mountain.

Lining up at Torreon to begin the annual White Mountain Hospice Foundation Golf Tournament only happens for you if you signed up in time. Sold out is good for the cause because it is their only fundraiser of the year.

Making sure the golfers for the annual WMHF tournament know they are appreciated, board volunteers go the extra mile because monies from the event take care of a number of needs for the terminally ill and their families on the Mountain.

SHOW LOW — Each year the White Mountain Hospice Foundation (WMHF) has a golf fundraiser. It is their one and only fundraiser of the year and unlike many golf tournament fundraisers, they don’t have to look far for golfers. Why? Because this fundraiser is truly a means to an end — supporting the hospice philosophy of care for terminally-ill individuals and their families by providing financial assistance not available elsewhere.”

It also does not hurt that the tournament is held at the Torreon Golf Club, a favorite course for many. This year the tournament will be on Sept. 25, and sorry, it is already sold out.

Sold out for WMHF means they will be more able to adequately answer the many requests they receive from the nurses and social workers on behalf of those who are terminally ill and are in need of emotional or financial support.

A person does not have to be in hospice to be eligible for consideration.

WMHF is not hospice. They are a Qualifying Charitable Organization consisting of a group of dedicated volunteer board members who raise money for the organization and answer innumerable requests each month received primarily from nurses and social workers.

The annual golf tournament which was the catalyst for the beginning of the foundation is how they began funding requests.

Lucy Coen is the founder of WMHF. Her husband, Ken V. Coen, an avid lover of golf, had been in hospice care and died on Father’s Day, 1996. An annual Fourth of July golf and barbecue event was a family tradition for the Coens and their friends. The family decided they would continue the tradition that year because they believed Ken would have wanted it that way.

The family continued the event for 19 years and one night, while sitting around a campfire, it was decided they should honor Ken by having a tournament in his name.

Trying to decide when and how, Lucy said her son Frank spoke up and said, “Let’s start now,” and he took off his hat and passed it around. They got $500.

The family had been impressed with the hospice care Ken had received so when Frank put the money in an envelope, he took it to hospice.

Each year after the first envelope was delivered, the family and friends continued to come for the annual event, and an envelope of money would always be delivered to hospice.

RTA Hospice Director Julie Tatum, now deceased, suggested they should form a foundation so they could help hospice patients in need.

Connecting with a hospice foundation in Payson which helped lay the ground work, Lucy became the founder of WMHF three years later.

Seven years later Bradford Coen wrote a grant for WMHF which was added to that year’s funds. It enabled RTA Hospice, the only hospice organization on the Mountain at time, to get the building loan they needed to build the facility on Porter Mountain Road in Lakeside. That was 2005 and the name later changed to Hospice Compassus.

Today there is also Accord Hospice on the Mountain.

Though WMHF is not a make a wish foundation, many who wish for help are helped at a crucial time when their life is hanging in the balance.

The requests vary and the board meets once a month to review those requests and often times on an emergency basis.

Sometimes a person needs help with utilities; sometimes it’s an appliance issue, a vehicle repairs or gas. It varies.

One of the board members had no trouble recalling a variety of fulfilled requests. The first one that came to his mind was a water leak over a dying patient’s bed which he could not afford to repair. WMHF was able to get that done for him.

Another request was for a patient who longed to go back to the Midwest for a final visit with their family. They could not afford to go. WMHF bought gas cards for them which covered the trip.

Another patient, 51 years old who had not worked in five or six years, needed food. She and her husband live off grid and have no type of assistance. She was hospitalized and was not eating because they could not afford food. Her husband has his own health issues and neither can care for the other. They were unaware of any assistance available or how to apply for it. With the help of a caregiver the the paperwork has been submitted for help from Arizona Long Term Care System (ALTCS). She will not be able to live alone. WMHF was able to get her a special food box which will last them two weeks until further assistance arrives.

Many requests are from people who are dying and have no family or anyone to turn to.

Golf is the means to an end that draws people to the annual tournament. Many who play have had family members or friends who have benefited from hospice care and choose to play this tournament because they know the funds will make a difference for a person who is at end-of-life.

Some say WMHF is the best kept secret on the Mountain for the terminally ill, but it is no longer secret. It is also not a secret that you must sign up early for this tournament.

More details are available about the foundation and its mission at https://www.whitemountainhospicefoundation.org/