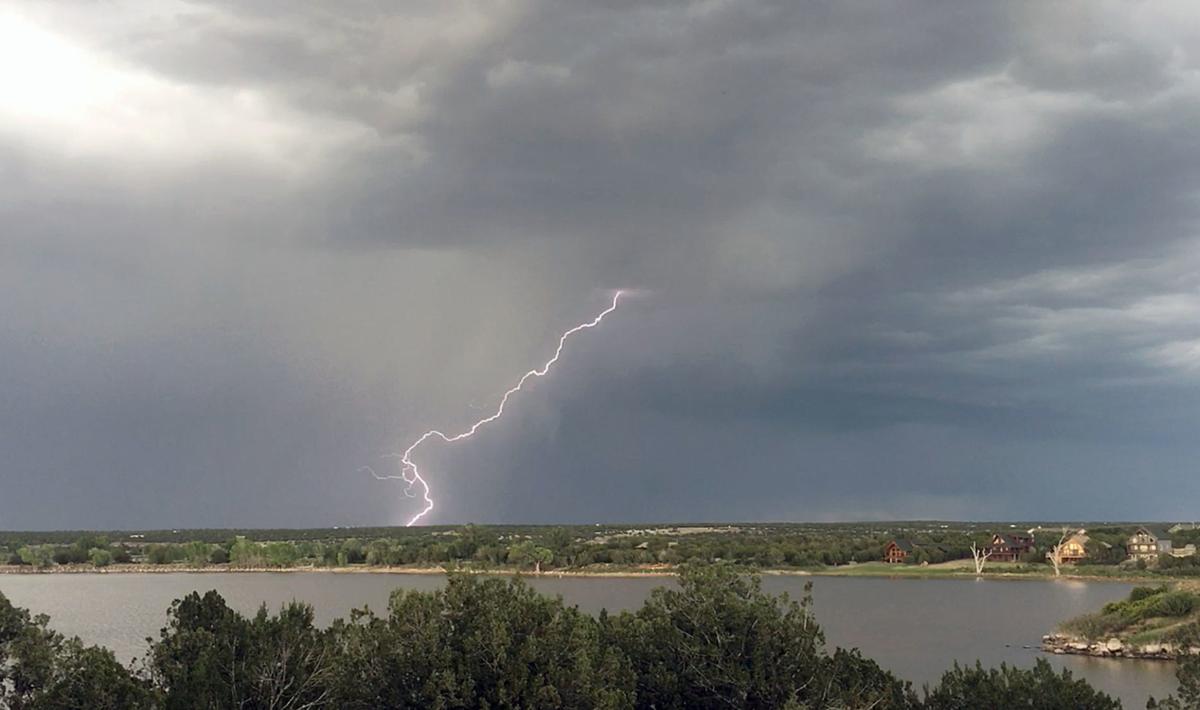 A streak of lightning rips through a monsoon storm over White Mountain Lake. Although areas of the White Mountains have received some locally heavy rains, this year marks the driest monsoon season in Arizona since weather records began. 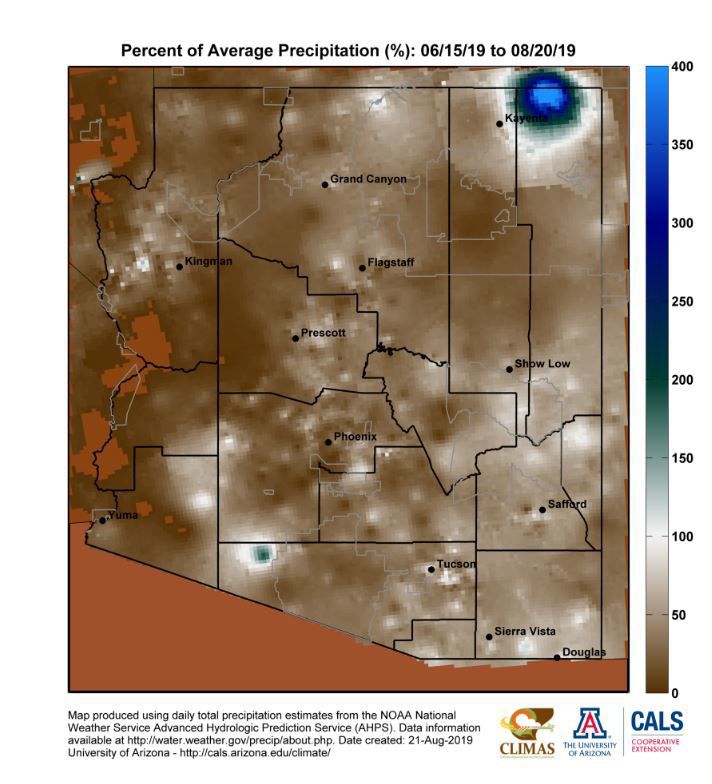 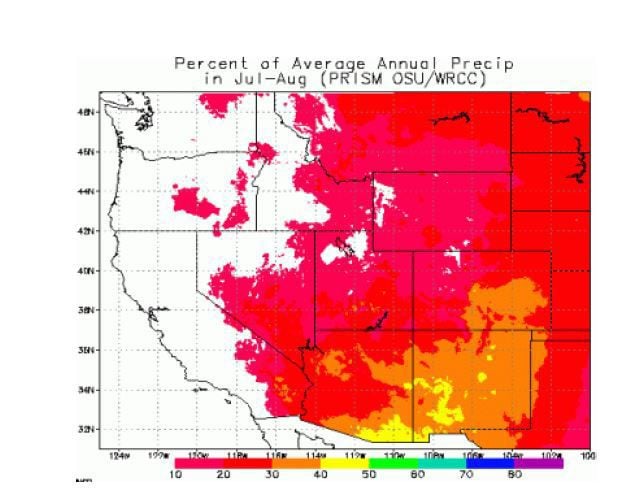 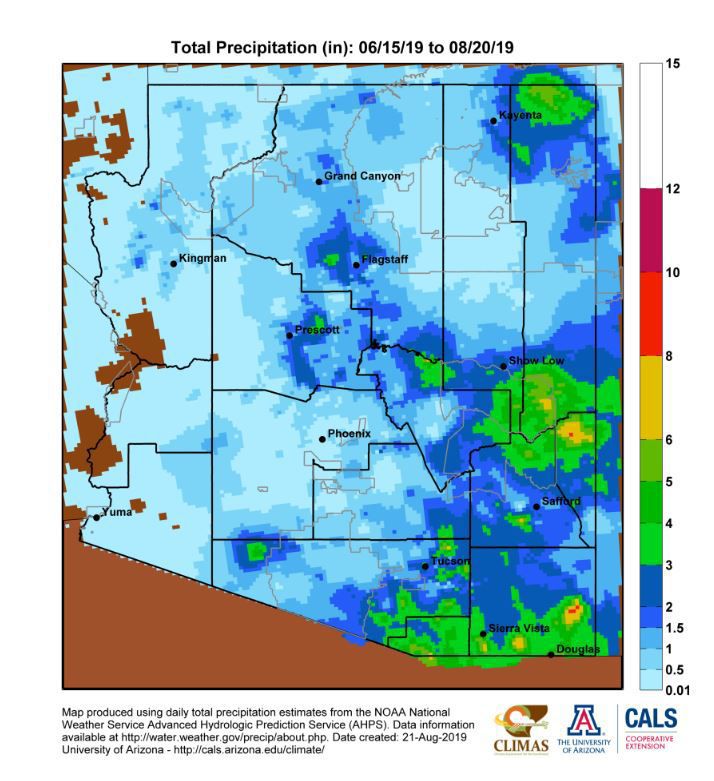 A streak of lightning rips through a monsoon storm over White Mountain Lake. Although areas of the White Mountains have received some locally heavy rains, this year marks the driest monsoon season in Arizona since weather records began.

ARIZONA — The state may wind up this year with the driest monsoon on record, as wildfires continue to flare and smolder across the state.

Most of Arizona typically gets half of its annual rainfall during the three-month monsoon season, which officially runs from June 15 to Sept. 30. But this year most of the state had gotten less than half a normal monsoon’s worth of rainfall.

After the first wet winter in years, the monsoon fizzle hasn’t yielded disaster. However, climate researchers from the University of Arizona and elsewhere warn that the monsoon will become increasingly erratic in coming years – rampaging and sputtering depending on the fitful gyrations of the jet stream as the planet warms.

As of Aug. 13, the monsoon has delivered less rain than any year since the start of record keeping in 1899.

Moreover, the forecast for the next week or two predicts more record temperatures than rainfall.

As a result, wildfires have sputtered and flared, including a fast-moving brushfire recently that shut down Interstate 17 near Sunset Point, between Phoenix and Flagstaff. Inciweb lists at least 14 active wildfires in Arizona. Fortunately, only a few of them like the Museum Fire near Flagstaff and the Woodbury Fire in the Superstitions forced evacuations and briefly threatened structures. The first damp dash of the monsoon helped firefighters get these fires under control.

Other fires near the Grand Canyon and in the White Mountains were muffled by the lingering effects of a wet winter and brief spasms of the monsoon season. Crews established perimeters and let the low-intensity fires contribute to desperately needed forest thinning and restoration efforts.

But in the past several weeks, the monsoon has dried up, replaced by record temperatures across the state. Phoenix hit 114 degrees twice recently, setting all-time records for the date.

The monsoon connects Arizona to planetary climate cycles. The shifts in the high-altitude river of air dubbed the “jet stream” normally bring storms loaded with tropical moisture boiling out of the Gulf of California and the Gulf of Mexico and across Arizona and New Mexico. Those storms deliver half of the annual rainfall in the desert regions and 30 or 40 percent of the rainfall to the White Mountains and Rim Country.

Show Low normally gets about 18 inches annually, with two inches in August and an inch each month from September through February.

Normally, when the surface water in the Eastern Pacific warms up — an El Niño — Arizona has a wet year. Mostly, that means more snow in the White Mountains, but sometimes a more active monsoon as well. This year, El Niño conditions did produce the first “normal” winter snowpack in years, but then sea surface temperatures cooled, perhaps contributing to the disappointing monsoon. The ebbing of El Niño conditions could produce a dry winter to follow our almost non-exisistent monsoon.

Normally, the seasonal warming over the tropics drives increased evaporation from the ocean and the buildup of a high-pressure ridge over Mexico in June. Arizona’s fire season peaks at this point, with an almost rainless May and June combines with the highest temperatures of the year.

This high pressure ridge in July begins to shift to the Southern Plains and Southern Rocky Mountains. This opens the door to inrushing tropical storms, producing monsoon storms not only in the American Southwest but in India as well. Normally, this produces fitful storms, including localized deluges and wet weeks followed by dry weeks.

Despite those variations, the monsoon remains critical to filling reservoirs and sustaining agriculture across much of the state. The monsoon also plays a key role in the length and intensity of the fire season. Finally, the summer rains largely account for the dramatic differences in vegetation between the saguaro-graced Sonoran desert and the creosote-dominated deserts of the Mojave in California.

But when it comes to the monsoon pattern in Arizona, abnormal may prove to be the new normal, according to an array of climate studies and projections.

The average temperatures in Arizona have warmed by 2 degrees in the past 50 years, about double the global average, according to a climate assessment issued by the federal Environmental Protection Agency. The warming trend could reflect natural variations, but is likely influenced by the 40 percent increase in heat-trapping carbon dioxide in the atmosphere as a result of human activities since the 1700s. The surface waters of the ocean have warmed by about 1 degree in the past 80 years, affecting weather all over the globe.

The acreage burned by wildfires in the Southwest each year has roughly tripled in the past 50 years, which reflects both the effect of the average warming and the overgrown condition of the forest after a century of fire suppression. The average snowpack in the state has also decreased by an average of 40 percent, according to the climate assessment – although snowfall still varies tremendously from one year to the next.

The shift has proved especially painful for the vast stretch of Northern Arizona centered on the Navajo Reservation, which has remained locked in drought even in years when the rest of the state gets relief. As one example, the Great Falls Dune Field (sand dune) on the Navajo Nation has advanced by a mile in the last 60 years, covering homes, roads and grazing areas. Some 40 percent of the people on the Navajo Reservation live in areas threatened by “extreme heat” issues and 30 percent of the population have neither public sewer or public water systems.

However, intensely localized systems like the monsoon remain notoriously difficult to predict. Some researchers running projected temperature increases through multiple climate models predict the Arizona monsoon could melt away in coming decades. Other projects suggest the pattern may simply become more violent and unreliable – with monsoon fizzles alternating with epic rainfall and destructive flooding.

So the forecast for 2019 calls for an historically dry monsoon season, with more hot and dry to come in the next several weeks.

It is amazing to me that, with over a month remaining in the monsoon season and the knowledge that we can pick up enough rain to exceed our monsoonal average with ONE storm, the reporter immediately leaps to the climate change conclusion. I've noticed this to be a fairly common thread in this particular reporters articles. While there is disagreement on both sides of the issue of climate change, it would be refreshing to have this reporter say as much and perhaps offer other perspectives. To state that any ripple or hiccup in the perceived normality of the weather is solely the result of climate change reeks of lazy and biased reporting.

Well I guess we're know which side of the political aisle this "reporter" sits on. Many PhD scientists believe the whole climate "change" subject it's just a way to control people and rule them. It's monsooning thru the state right now as I read this article. Other weather forecasters predicted a very late monsoon season this year after the weather patterns of our incredibly wet winter. But as to this article? A little less personal bias would be nice

First, humans have no effect on the natural warming and cooling cycles of the planet.

Second, if we can stop you libtard idiot yuppie pencil pushing envirotards in Tucson and California from filing injunctions that stop our logging and thinning efforts, our forests would be in much better shape

I believe the article still reads the same even if you where to remove the items that trigger the talk radio crowd. lest we mention that the above proposed non sequiturs disguised as reasonable responses to the author do absolutely nothing but stifle real conversation.