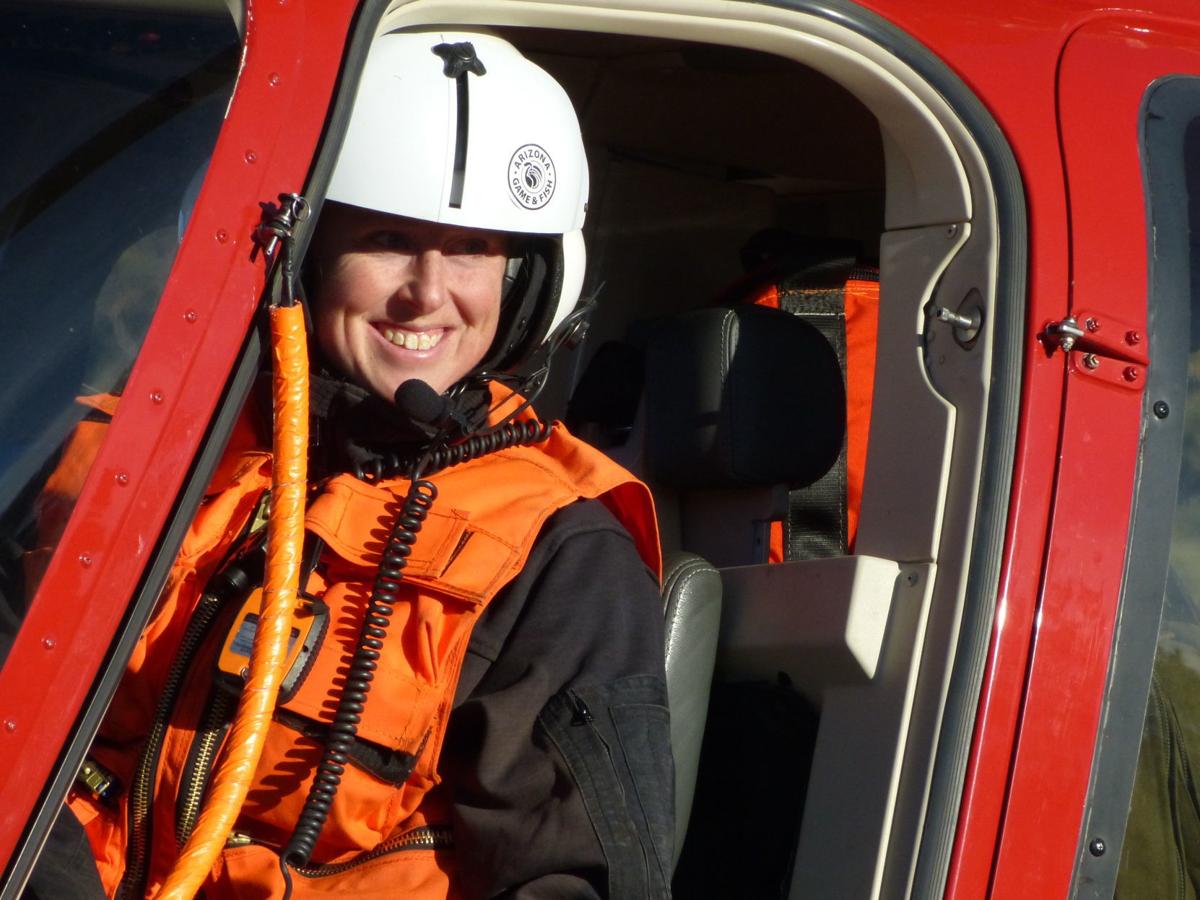 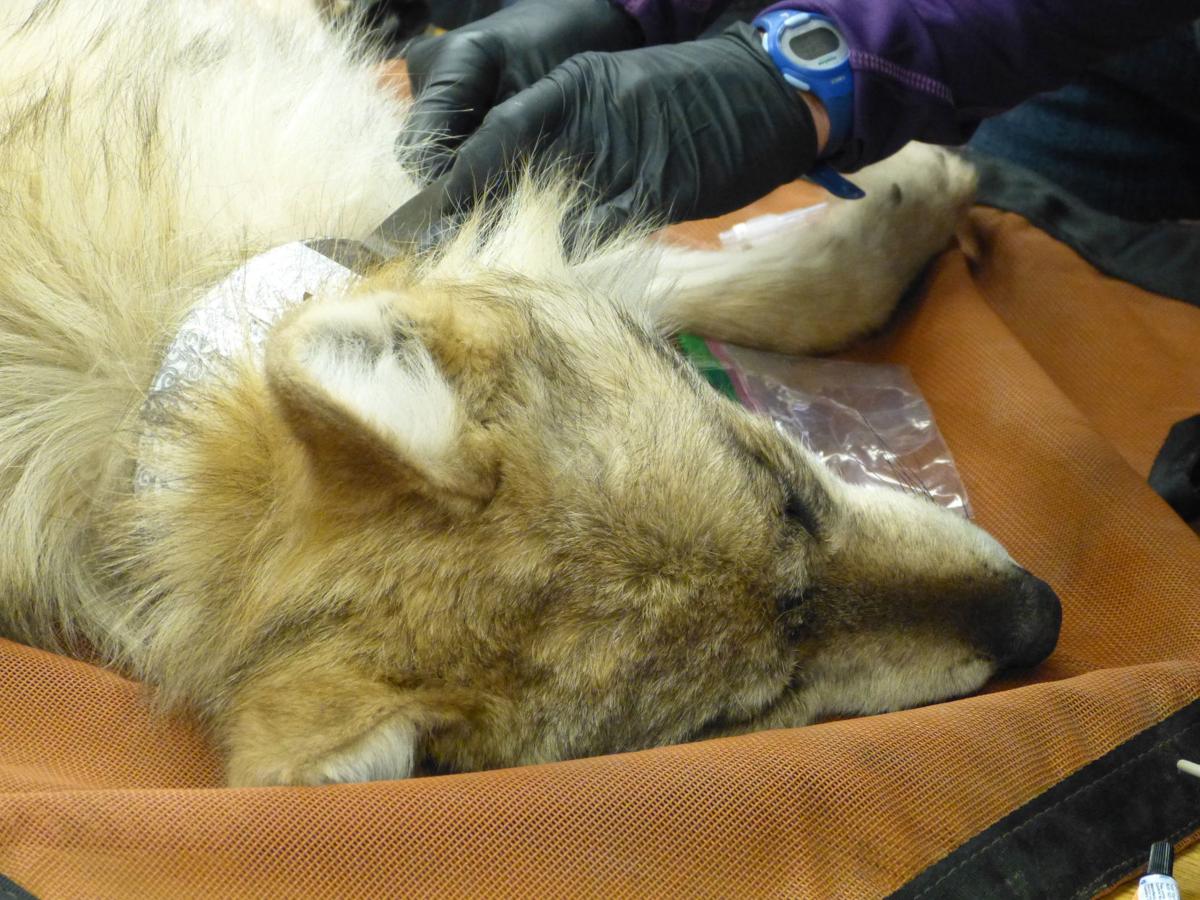 A sedated young male Mexican gray wolf gets a tracking collar during his health check during the recent annual wolf count. 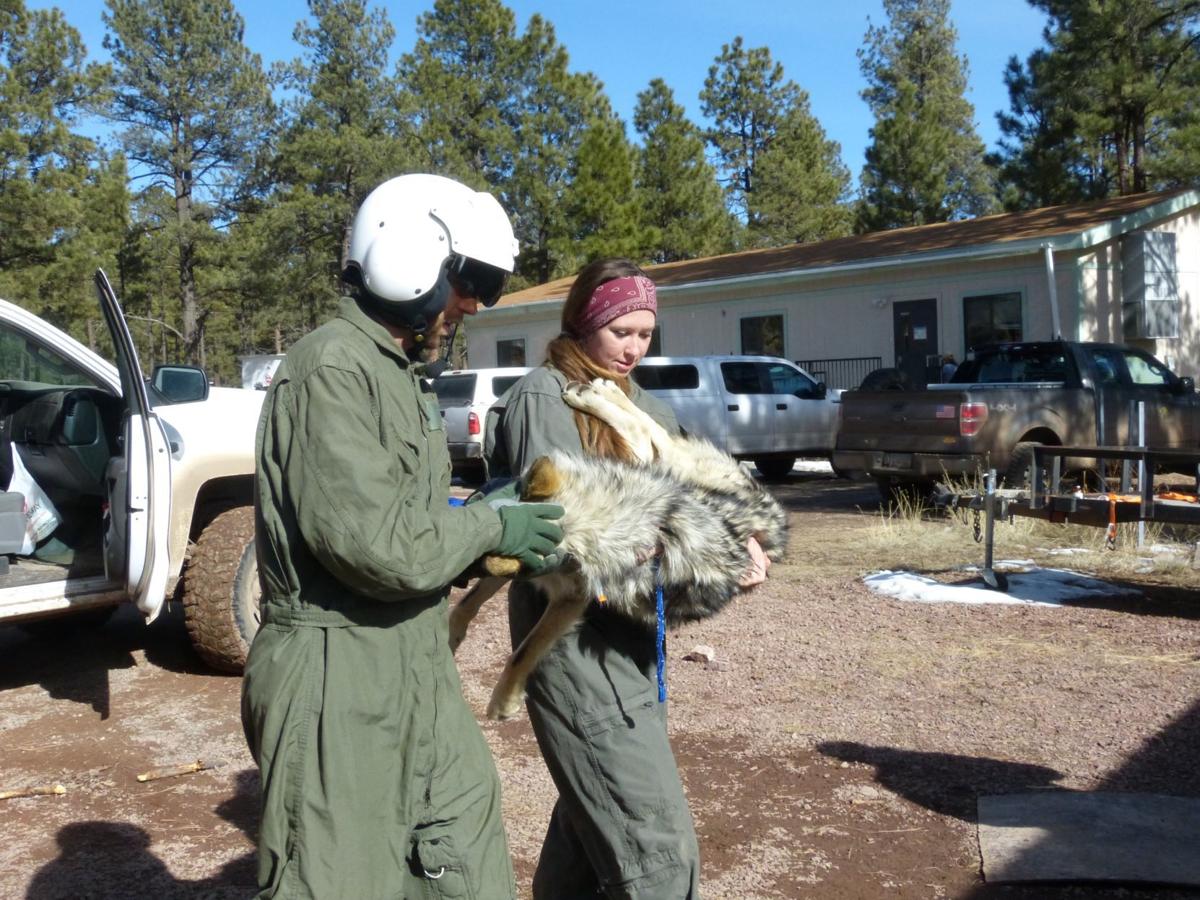 Nate Voight of the US Fish and Wildife Service and Megan Peterson, also of USFWS, carried a sedated Mexican gray wolf to an exam room in Alpine during the 2019 count. 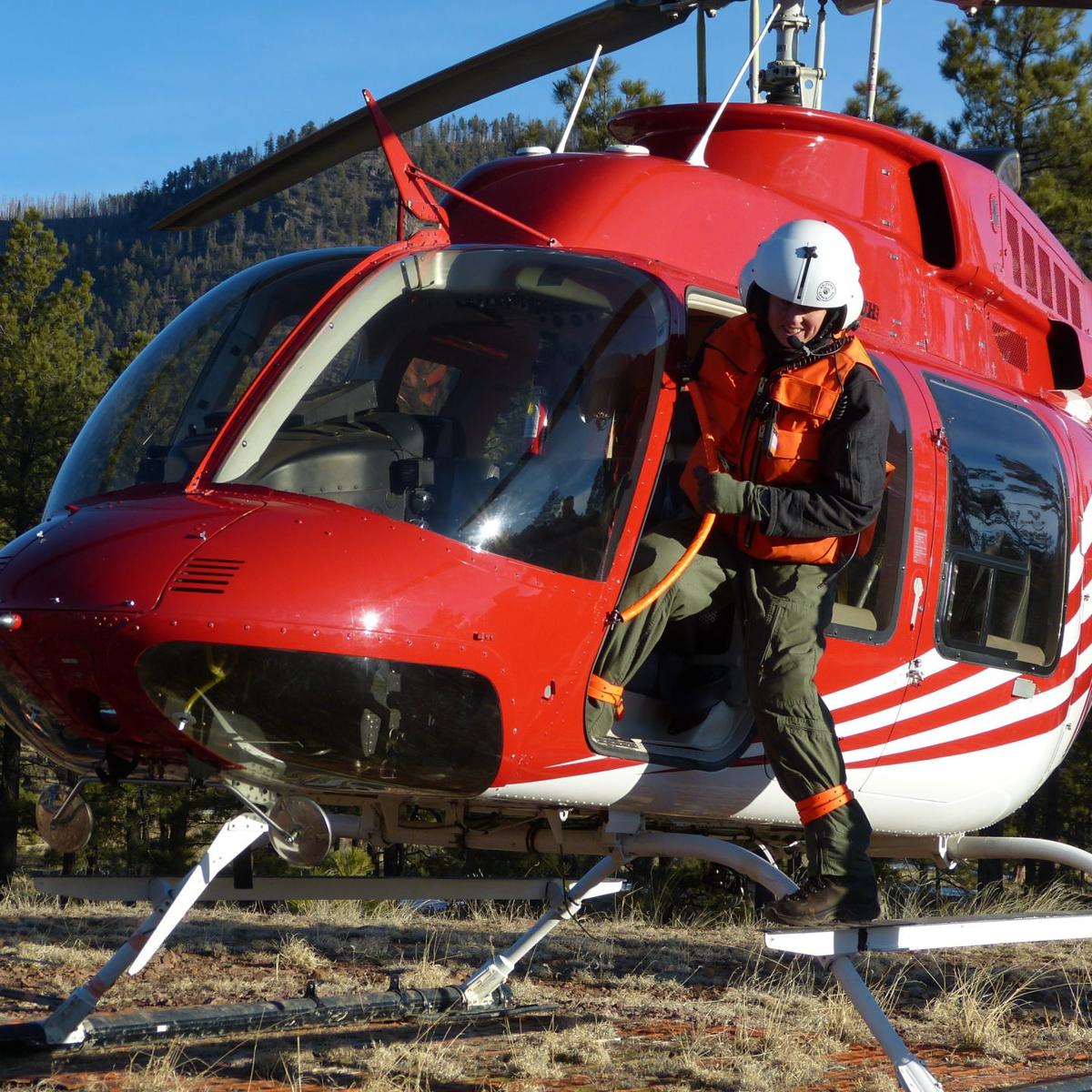 Fuller steps into the cockpit.

Now you’re in a chopper, skimming just above the tops of tall ponderosa chasing the silvery forms of wild wolves running below. You’re trying to watch out for hazards for the pilot — a tall tree ahead. You’re trying to spot and count all of the wolves as as they flee, some of them cleverly seeking the best cover to hide from you.

Maybe you are looking for one particular wolf, one whose radio collar has a failing battery.

You point out that wolf to the pilot and the gunner — the person who will try to dart the wolf with a sedative so that they can be captured and fitted with a replacement collar.

The chopper swoops lower, heading for the wolf to be darted. The gunner leans out, tethered with a safety harness, to take the shot with a dart gun.

Wait. Is it five o’clock yet?

Genevieve Fuller does not watch the clock. There’s no workplace boredom in her job.

Fuller is a wolf biologist with Arizona Game & Fish, part of the Mexican Wolf Interagency Field Team. When the annual wolf count is held in January, one of the tasks she takes on is “helicopter mugger,” the person who helps locate, count and capture wolves from a chopper.

She doesn’t watch the clock.

For two weeks every winter, the Interagency Mexican Wolf Field Team of which Fuller is part, goes into overdrive to complete the aerial count of the Mexican gray wolf population. It is the final step in an annual census that keeps tabs on the number of animals in the wild — a gauge of how well the endangered species is recovering. Nearly all of the animal’s Arizona territory is in the White Mountains.

“This is one of my favorite parts of my job. It’s fun, it’s challenging. It’s potentially hazardous. It requires a lot of focus,” Fuller explained.

Safety, Fuller said, has to be number one.

“We have a pretty strong safety culture … human safety is first, animal safety is second and everything else comes after that.”

“The count is actually our main priority … that’s very important for wolf recovery, to get that number. But we’ve got the helicopter, we’ve got the experienced crew, so we also take this opportunity to get some of these collars out which are so crucial to the rest of our management activities throughout the year,” she said.

But months before any aircraft go up, the wolf count is already underway, as Fuller and other members of the team conduct a ground count.

“So we start November 1 … we actively go out and set up trail cameras in areas where we think we’ll get wolves,” she said.

They locate the packs using GPS collar data, and use ATVs or snowmobiles as needed to access areas where the wolves are located. Then they go on foot.

“It’s a lot of hiking, it’s a lot of stalking, you’ve gotta be quiet. You’ve gotta know which way the wind is blowing, their noses are very good. And a good portion of the time they detect you and they’re gone before you get eyes on them,” she noted.

The ground count combined with the aerial count provide several data points on each pack so as to get the most accurate tally.

“The more data we collect before helicopter operations, the more sure we are of that number. It’s a minimum count. These are the wolves that we’ve seen on the landscape. We’re not making an estimate, we’re not guessing how many more we may have missed. We’re basically trying to count as many wolves as we can get eyes on,” she said.

Flight days are both exciting and demanding and exhausting. First, a fixed-wing plane goes up first to locate the packs.

“But they’re not able to actually get the count. You need a helicopter to get close enough to get the count,” Fuller explained.

So the chopper crew comes in.

“I know these wolves. I work on the project year-round. I’ve put collars on a good portion of them … from the helicopter we know we’ve got a collar, whose battery is dying and due for a replacement. I can also direct the gunner to that particular animal to try and target that failed collar.”

Once the wolf is darted, it takes about five minutes before they are anesthetized enough to be handled. Fuller takes a GPS reading on the animal’s location, and then they look for a place to set the chopper down close by, so the wolf can be retrieved.

That’s part of her job too.

She hikes into the wolf, and does a quick check on the animal’s health status before loading them up. They don’t want to stress the animals too much. When it’s safe, the wolf is muzzled and its legs are hobbled so it can be safely carried to the chopper.

“These wolves can weigh anywhere from 50 to 85 pounds … that is some big, floppy weight. I do train for this, and they still feel heavy,” she said, noting that she may have to hike back to the chopper for a half-mile through snow or uphill, carrying the wolf.

Fuller says that it is satisfying to get the job done, get the collars on the wolves. But more important to her is to see the impact of her efforts show up in the resulting management of the animals and how that affects the broader community. The fate of the wolves has more to do with people, she knows, than biology.

Fuller says that she has opportunity to interact with ranchers and other community members to talk about the wolves.

ridiculous waste of money and resources