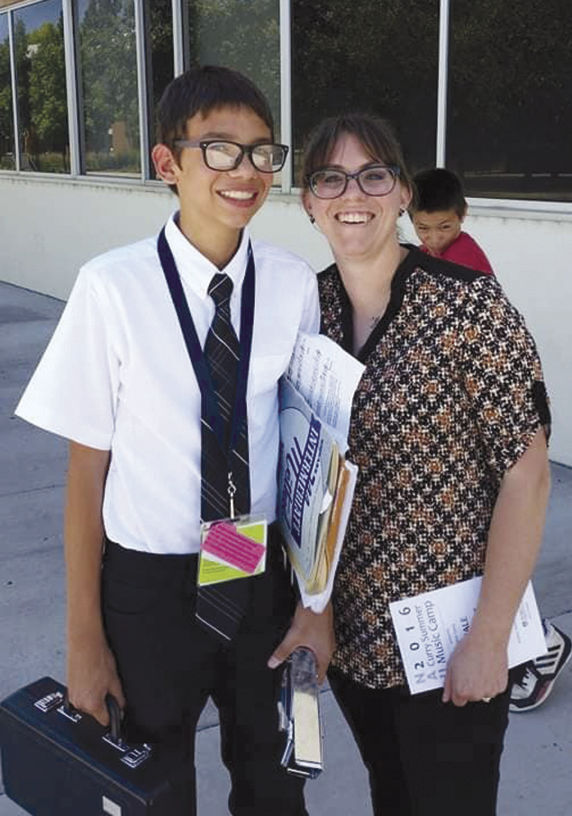 Aidan Jessop with his mother, Temple Skousen, at the Curry Music Camp program, where, ‘He attended for two summers,’ says Mrs. Skousen. 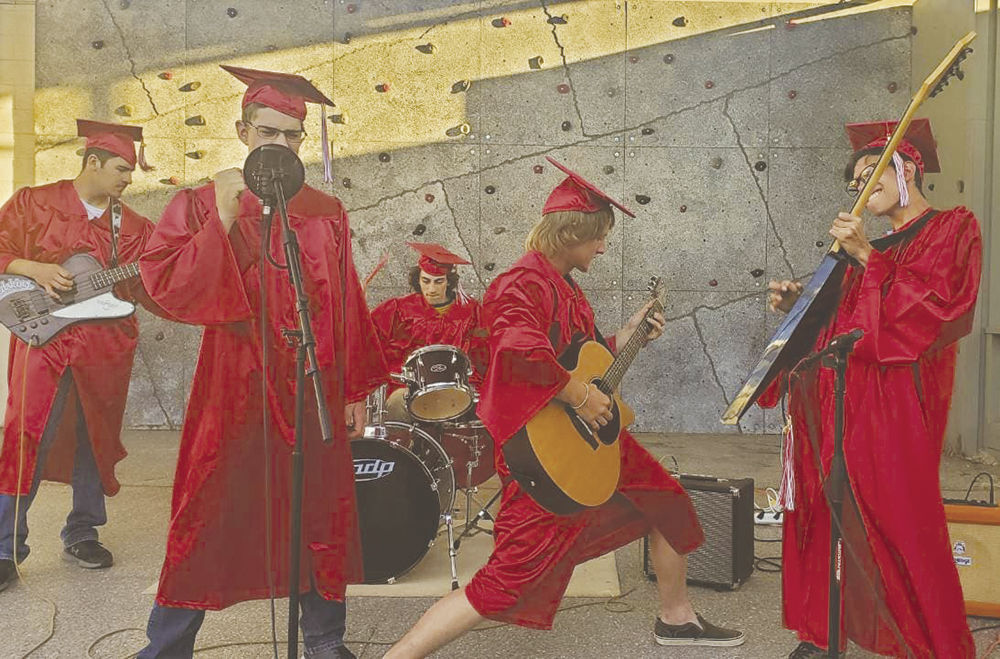 Aidan Jessop, (photo R.,) with the band he created, ‘Perambulating Stillness,’ will soon leave the loving family he grew up with, in Concho, Arizona, to explore the world on a different scale. A recipient of a full-time QuestBridge Scholarship for a placement at Columbia University, he’ll be back home for Christmas to recharge his deeper roots that contributed to the strengths he has developed.

Aidan Jessop with his mother, Temple Skousen, at the Curry Music Camp program, where, ‘He attended for two summers,’ says Mrs. Skousen.

Aidan Jessop, (photo R.,) with the band he created, ‘Perambulating Stillness,’ will soon leave the loving family he grew up with, in Concho, Arizona, to explore the world on a different scale. A recipient of a full-time QuestBridge Scholarship for a placement at Columbia University, he’ll be back home for Christmas to recharge his deeper roots that contributed to the strengths he has developed.

At first, he shrugged his shoulders when we talked about the location of Columbia University in New York City. Then I said, “116th and Broadway.” “Oh right,” he said.

The town that could seem like another world was starting to become a part of Aidan Jessop’s new life, as he revs up to ship off to Columbia University to study chemical engineering this fall.

It’s the world of science that behooves many, yet we know that great minds are working hard and dedicating their lives to healing and enhancing the world; one atom at a time. One of them will be Aidan Jessop. It’s as if we already know he’s going to be in the world that makes phenomenal differences for so many who probably know so little about what chemical engineering is.

Perhaps it will kick in when he unpacks his stuff, and it’s spread out across his room, that he is where he is at eighteen years old and is possibly going toward the greatest adventure of his life, so far.

Aidan was raised, schooled, and loved by a strong family in Concho, Arizona. He visited New York City once when he was a toddler. He says he can remember pieces of it.

He’s that tall, thin, handsome young man who walks silently among the masses. “My friends say I’m a lazy overachiever. That’s not true. I went home after school and studied for hours each day. Nothing was handed to me,” he says.

His dorm, a different place to eat, study, and new relationships, await where he will be treated and respected for who he is. He bloomed in music, and drama, his mother, Temple Skousen says, and, “He was an integral part of his high school soccer team all four years.”

In this small town, in the White Mountains, where muddy roads and dry air became his familiar, as well as a swell of siblings, he thrived. He’s a natural in the world of thinkers and intellectuals that rise up no matter where they come from. This innate thinker at eighteen is the recipient of a “grant” he tells me nicely correcting my information and understanding of what this QuestBridge Scholarship really is for him. “It’s purely financial aid. Columbia is the most expensive school in the country, $84,000 a year is the cost of attendance. I had to pay $2,400.” He will owe nothing back.

By the end of August, he will leave for New York City, to begin his new life at one of the greatest universities on the planet. He explains the options a degree in this field will bring to him, “It’s a very broad degree that includes pharmaceuticals and flavorings.” Also, of interest to Aidan is philosophy. Then, the visual of words fuse together and scurry through the air, and the combination of a scientist, with a philosophical consciousness, conjures up images of great healing. Good minds are a gift to us, and so is being on board with the world in front of him as it is changing so rapidly.

A drive across country with his mother, to the world of uptown and downtown and a sunset that can be seen from the East and Hudson Rivers will most likely open his scope, as it mixes with the memory of the sky of Arizona and his beginnings. Teachers at the St. John’s High School both in English and the sciences fueled his fire within and that he could do it, he says. His father, Moroni, says, “He was always an achiever.”

He has played guitar in a band called “Perambulating Stillness,” and smiles broadly underneath a swath of dark hair that covers part of his left eye. “I bought a guitar case so I could bring my guitar. It was cheap.” he says.

“Aidan is a self- taught guitarist,” his mother continues, “and by the time he was four he could read.”

He was valedictorian in the 8th grade where he attended the Concho Elementary School. Soon, he will see yellow cabs, instead of cows. Temporarily, perhaps, he’ll be exchanging the beautiful mountain sky, for neon lights, so he can get closer to the why’s and how’s in science. A pioneer. He doesn’t waste time. Working this summer at Home Depot in Show Low became a transition from his high school days to having his own income.

“Considering the incredible changes that have taken place in our country this year, I am scared to leave him by himself in a different world in NYC, but what comforts me is Aidan’s incredible character and the integrity that he has,” says his mother.

He may have also picked neuroscience if not chemical engineering, he states in his matter of fact way, peering at me through his black rimmed glasses. No one is surprised that Aidan is going east; leaving in a rented car with his mother from Arizona to New York City, certain to cherish all the gas stops and hotel stays, as they say the journey is the story. Take notes, Aidan, as this is one car ride you will always remember.

Kareena Maxwell is the owner of Maxwell Media, LLC, the author of 10 books, and the publisher of The Concho Voice and beyond.

What an AWESOME young man and inspiring story! Thanks, Kareena Maxwell and WMI for sharing his story!