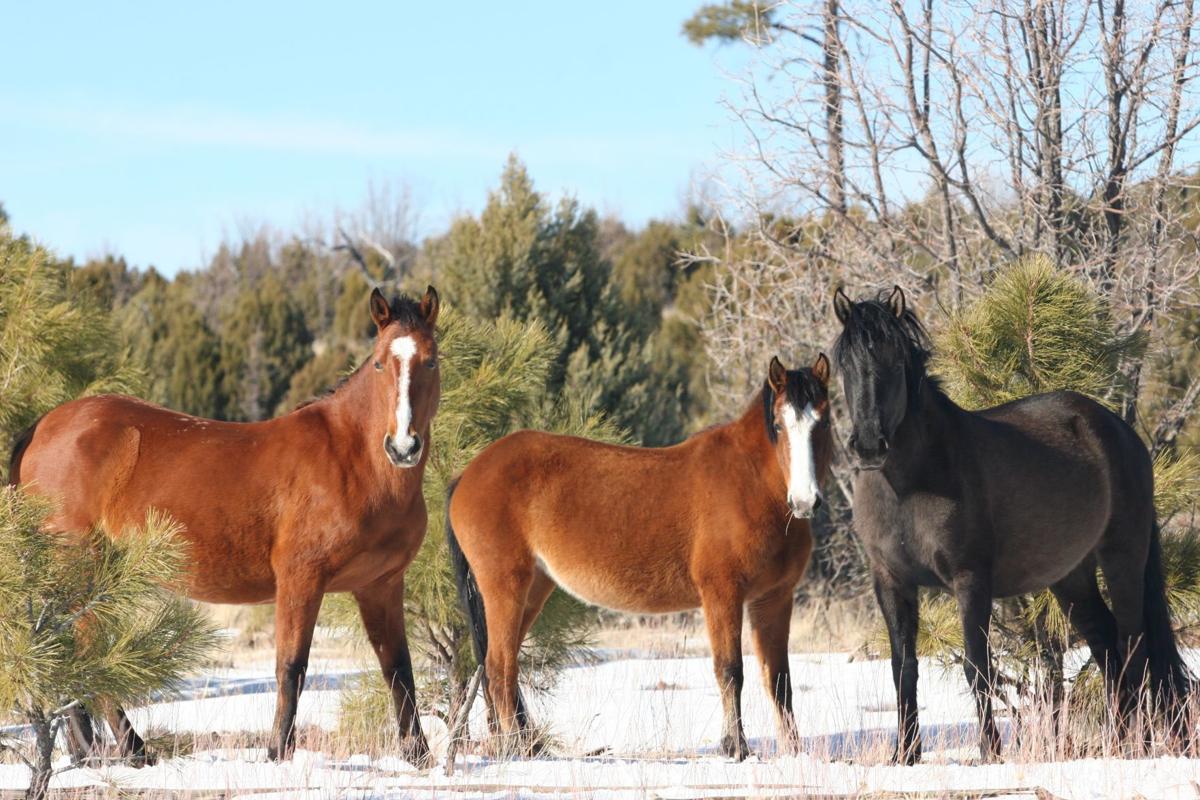 Several mares in a band of Heber Wild Horses outside of Overgaard in the Apache-Sitgreaves National Forest. 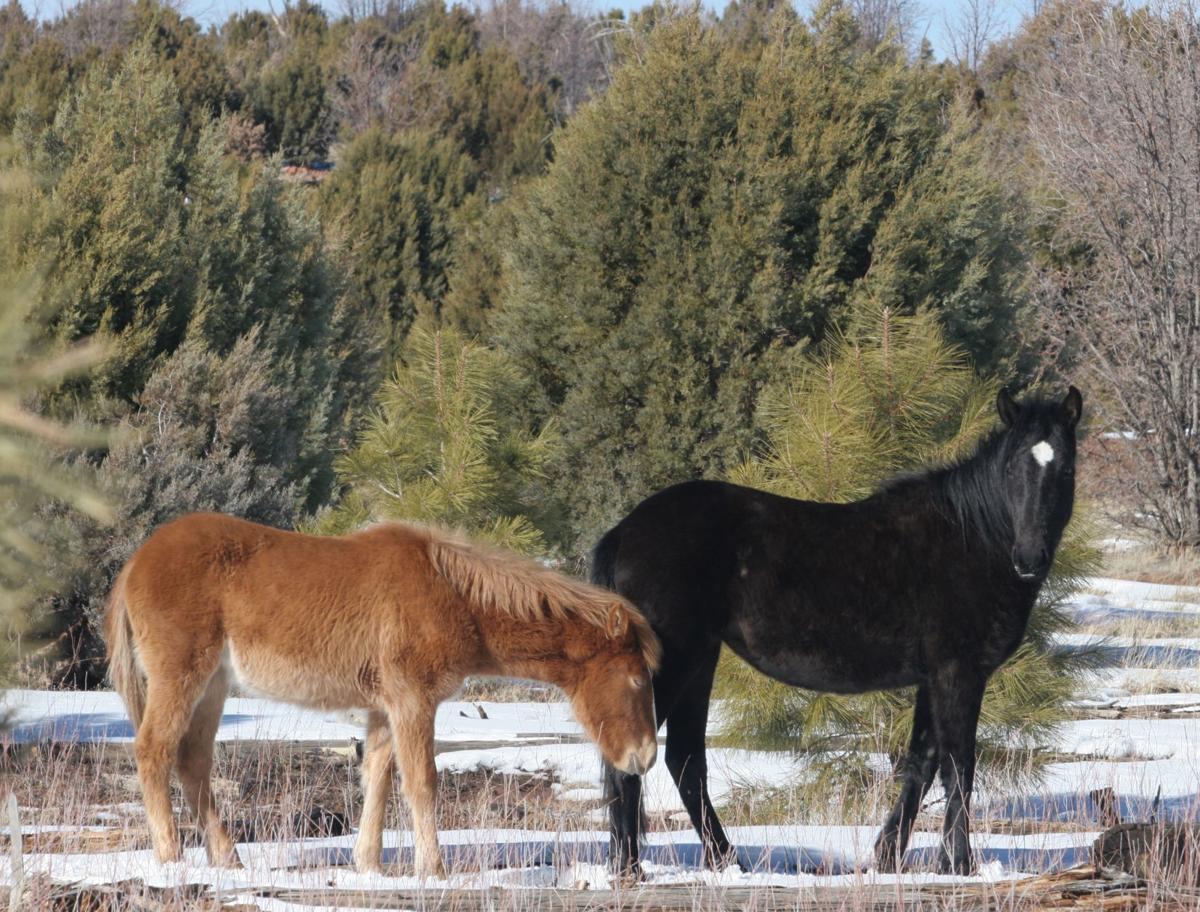 A Heber Wild Horse mare and yearling take a leisurely walk through the Apache-Sitgreaves National Forests, stopping to enjoy patches of sunshine.

HEBER/OVERGAARD – Eight more horses from the Heber Wild Horse herd were found dead on the Black Mesa Ranger District of the Apache-Sitgreaves National Forests on Friday, Jan. 10 according to a news release issued by the Forest Service on Saturday. “Preliminary information indicated the horses’ deaths were caused by gunshot wounds,” confirms the release.

The horses were also said to be found “outside of the Heber Wild Horse Territory,” but the exact location where the horses were found was not identified. At this time, it is unclear if the eight horses were part of one band or how long they had been dead.

This brings the total of horses found dead since 2018 to 27. Based on Saturday’s press release and the ones issued last spring by the Forest Service, the bodies of 19 Heber Wild Horses contain evidence of gunshot wounds.

Some of those found last year were “too severely decomposed to determine the cause of death and one was found to have died of a possible motor vehicle collision,” according to the 2019 press releases.

In addition to the confirmed Heber Wild Horse deaths on the south side of SR260, two domestic horses were found shot on Sept. 30, 2019 near Pinedale on the north side of SR260. Since the horses were privately owned, Navajo County Sheriff’s Office responded, investigated and arrested 19-year old Ryland Haynes of Lakeside on October 18, 2019.

It is unknown if this incident and arrest are related to the killings of the Heber Wild Horses.

Now the public wants to know, when will it end? And, more importantly, what is the status of the investigation being conducted by the Law Enforcement Investigation (LEI) division of the US Forest Service?

Repeated inquiries to the Forest Service for updates return the same answer: “At this time, we do not have any additional details on the investigation that we can provide.”

Some community members have lost faith in the investigative process which has been compounded by the Forest Service despite Saturday’s press release asking “… the public to remain patient and to avoid the area during the ongoing investigation.”

“I am outraged to hear this news, as your agencies have failed miserably at investigating and arresting a person or persons responsible for the prior shootings of wild horses in the Apache-Sitgreaves National Forest,” writes Kathie Reidhead of Payson in an email to the Forest Service and NCSO.

Reidhead reported witnessing an individual shooting towards the horses last summer while she was taking pictures of the Heber Wild Horses on national forest lands. She claims that, to date, she “was never contacted by anyone at USFS for an interview.”

“A very sick individual is on the loose, stalking and killing wild horses and it is very concerning because public safety is at risk too,” she adds. “In the incident I witnessed on May 2, 2019, I could have been shot as well.”

Saturday’s USFS press release states “The Forest Service law enforcement and equine experts, in partnership with the Navajo County Sheriff’s Office are investigating the deaths of the horses.” On Monday, NCSO officials confirmed they were not dispatched to the scene but would support the USFS investigation as needed.

The Heber Wild Horses Freedom Preservation Alliance (a.k.a. Heber Wild Horses) is a grassroots advocacy group based in Heber-Overgaard who have kept tabs on the federally protected herd for decades.

They were the first to report horses that appeared to have been shot in the forest – the first being two stallions found in October 2018.

The group routinely tracks and observes the Heber Wild Horses and various members have discovered the bodies of other Heber Wild Horses between October 2018 and April 2019. However, they were not aware of the most recent incident in which eight horses were discovered with evidence of gunshot wounds. They only became aware by means of Saturday’s press release.

“What will it take for the Forest Service to take the shootings of Federally protected Heber wild horses seriously?” posted the Heber Wild Horses Freedom Preservation Alliance on their Facebook page on Saturday. “Will they bother to interview people who call in tips this year? They didn’t bother to contact tipsters from last year’s killing spree.”

The Independent briefly spoke to Apache-Sitgreaves National Forests Supervisor’s Office Information Assistant Steven Johnson on Monday morning to ask for more details about where the horses were found, who found the bodies and whether they appeared to be of the same band.

Johnson said he and the Forest Service press team were sorting through multiple national, state and local media inquiries and compiling answers but did not have that information by press time.

It should also be noted that the Heber Wild Horses are protected whether they are inside or outside of the designated territory.

“The 16 U.S. Code § 1338 criminal provisions state ‘Any person who maliciously causes the death or harassment of any wild free-roaming horse or burro shall be subject to a fine of not more than $2,000, or imprisonment for not more than one year, or both,’” states Saturday’s press release.

If the public encounters an injured or deceased horse, please contact the Black Mesa Ranger District at 928-535-7300 to report it immediately.

I just can't wrap my head around this situation. What sick individual would want to hurt this or any animals? They need to be jailed and a mandatory mental evaluation be done. These are beautiful creatures that can't defend themselves, then need all of us to help stop this travesty.

While no one condones the shooting of horses, some of the responsibility for these harsh actions can be attributed to the Apache Sitgreaves National forest. The leadership group has failed to adopt any meaningful plan for managing the feral/wild horses and have done nothing to contain them in the Heber wild horse territory or the TMZ (Travel monitoring Zone). The non advocate public is increasingly angered by the lack of management and the resulting degradation of habitat by an incredible over supply of horses into areas that the Wild horse act never intended. Yes, the shooter needs to be stopped, but the Apache Sitgreaves is sitting idly by as horses are driving other wildlife out of the area. They need to take action ..... and soon.

The Forest Service is working on a management plan as required, but there's a complete lack of willingness by those who hate the horses to wait for the process to play itself out. There is no evidence of the horses causing any problems in the forest at all, either with the vegetation, or the wildlife. Do you think maybe all the dirt bikes, ATVs, hunters and target shooters in the forest may be having some effect on the wildlife? These elk and deer aren't afraid of the horses, and the horses don't bother the deer and elk. It's people and their toys that cause problems in the forest, including all the trash they leave behind and dump in the forest.

It's absurd to suggest there is an overpopulation of wild horses. The most recent census was conducted in 2017 by the USFS and showed a total of 299 horses on the Heber Wild Horse Territory and adjacent forest lands. With 616,000 acres in the Black Mesa District, that means there is 1 wild horse for every 2,060 acres. These are the falsehoods that are spread to muddy this issue. According to Western Watersheds Project, the nation's leading environmental conservation group working to solve the widespread problem of poor range health on Western public lands, CATTLE - not wild horses - are the main problem causing overgrazing and damage to native habitats on western public lands.

And furthermore, according to the latest data from the Congressional Research Survey, the cost to graze on privately-owned land out West was $23.40 per Animal Unit Months (AUMS), or the amount of monthly forage eaten by a cow and her calf. In the Public Lands Grazing Program, ranchers can rent public land for just $1.35 per cow/calf pair. Perhaps the Law Enforcement Officers looking for suspects in the ASNF shooting deaths of the wild horses should look to the folks with the most motives to kill them. How foolish it seems not to share the land with less than 300 wild horses.

[angry] Bad thing pretending to be human, we are here as stewards on this planet.. Not to be killers!![alien]