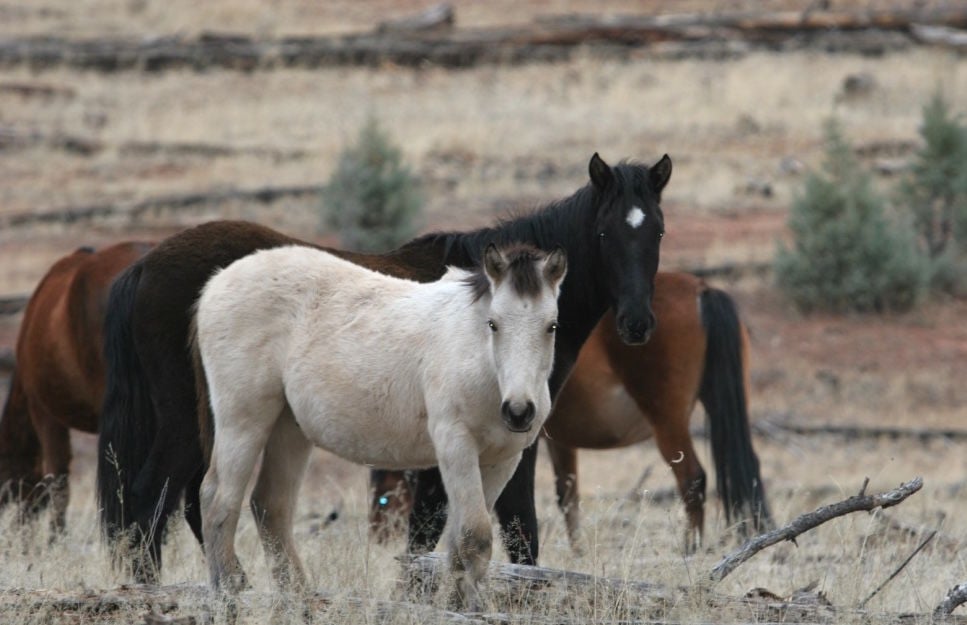 A Heber Wild Horse colt and other yearlings in the forest. 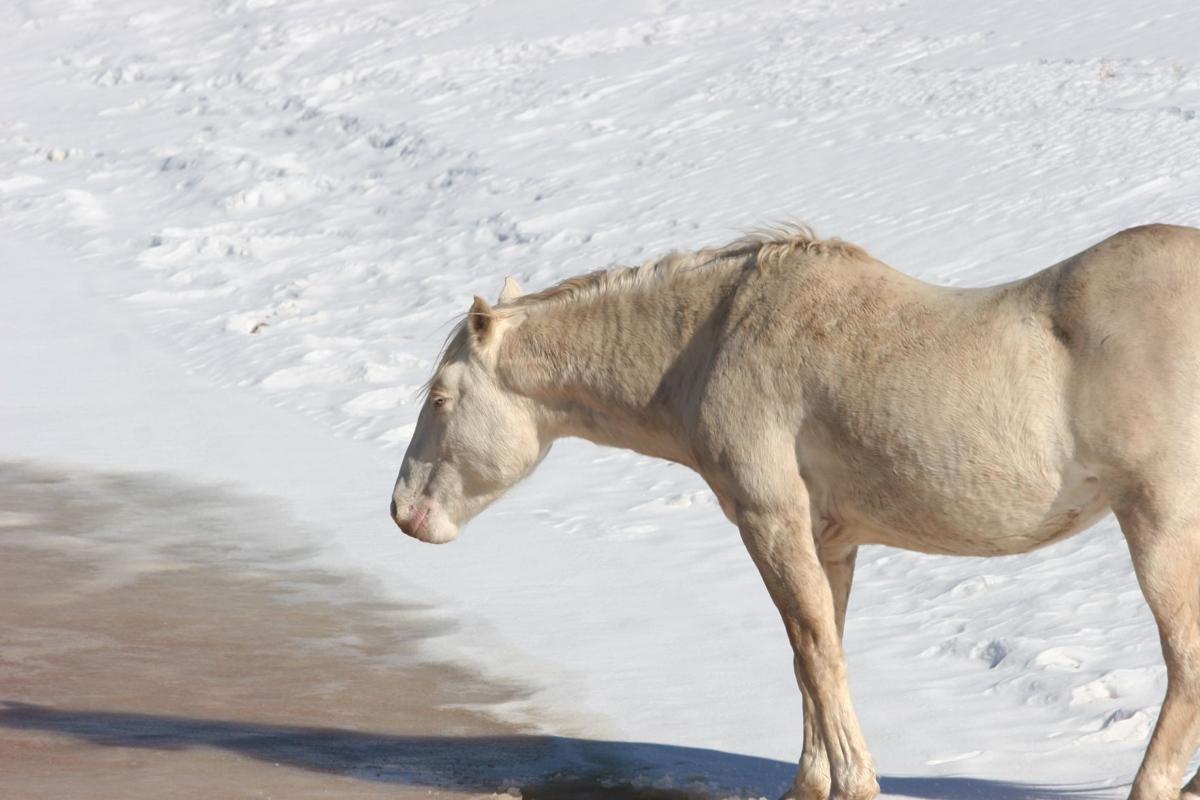 Thursday, April 22 was the last day that the public could submit comments.

Apache-Sitgreaves National Forests Supervisor Anthony Madrid, in a phone interview with the Independent, says the Forest Service continually encourages the public to submit their comments.

However, Citizens Against Equine Slaughter (CAES) disagree with Madrid’s statement, alleging that the Apache-Sitgreaves National Forest is intentionally omitting their comments from the document.

CAES has been one of the most vocal opponents of the Apache-Sitgreaves National Forests’ Heber Wild Horse Territory Management Plan throughout the process. They say the current public comment period is “an unequal ‘public’ process.”

Although CAES and many other horse advocates disagree with the proposed methods of how to “manage” the Heber Wild Horses, their current argument focuses on two things — the difficulty navigating the public comment website and what they say is the intentional disregard of their right to participate in the public comment process.

CAES argued for a two month extension to the public comment period but was denied.

Theresa Barbour, Founder of Water for Western Wildlife/Emergency Needs Initiative (ENI) and a CAES consultant, spoke to the Independent about the matter.

Barbour describes the website is cumbersome, difficult to navigate and says it has changed or been reorganized throughout the 30-day comment period. She cites rearrangement of reference materials and attachments which creates confusion for the public trying to understand and weigh in on the matter.

Barbour, CAES founder and board member Patience O’Dowd and others have contacted Apache-Sitgreaves National Forests Supervisor Anthony Madrid to point out what they consider a flawed website and an unfair process.

“Commenting on the proposed draft is a huge task and an important part of the process,” says Barbour.

“It’s a National Environmental Protection Agency (NEPA) violation if ASNF doesn’t include our documents and references,” says Barbour. “Part of the process is that we read the Forest Service plan, their references and their studies and we have the ability to refute them without our own sources.”

“Adding public comments or documents to the record during the comment period is illegal,” says Barbour. “What about the people that already commented on the plan but didn’t have our documents available to read?”

“We think it was intentional — leaving our comments off,” says Barbour.

In addition to not including their comments in the Heber Wild Horse Territory Management Plan draft, CAES says there are other issues including times when the website was down.

“At the first part of the 30 day period, there was a list of all the reports,” adds Barbour to their list of website problems. “At some point the reports were moved to the Environmental Assessment Draft Specialist Reports area.”

“We just found out today that the USFS has also added an important report on the [horse] Census called: “2019 Horse Band Observations” under the Draft EA Specialist Reports Section,” writes O’Dowd in an email to ASNF. “This is again, no public notice.”

In a responding email, Madrid states that they have received CAES’ comments on the Heber Wild Horse Territory Management Plan and will upload the cited reference and reports.

“Again, I apologize for the oversight and commit to incorporate your comments in the final environmental assessment as appropriate,” writes Madrid.

Barbour also says that a “Scoping” tab and an “Analysis” tab was added to the website during the 30-day period.

Then she said the “Socio-Economic” tab on the website was either moved or renamed and a forage utilization and allocation report appeared five times.

Barbour emphasized what CAES says is another significant problem with the “References Cited” list on the website.

“Instructions for the public had to be added because the zip files were too large to download,” said Barbour. “... the viewer must click to keep a document that Google warns ‘cannot be downloaded securely.’”

“It’s hard for the public to stay on top of the information and be able to comment because it’s so confusing,” said Barbour.

“In any case, our fellow public are not seeing any substantive comments from CAES, are not benefitting from our comments at this point in the NEPA process, and this damages our abilities for involvement,” writes CAES Founder Patience O’Dowd in an email to ASNF.

The Independent contacted Madrid about CAES’ allegations and he responded promptly via phone.

He said that the Heber Wild Horse Territory Management Plan was created by an interdisciplinary team of about 12 experts within the US Forest Service and Apache-Sitgreaves National Forests staff.

“Initially we posted the draft Environmental Assessment (EA) and the Draft Territory Management Plan,” said Madrid “Those are requirements that we have to be able to provide as part of the proposed action so the public can make an informed decision.”

With regard to the Specialist Reports and their location, Madrid said that the public requested the additional documents to which CAES refers.

“From time to time during the comment period we received other requests for materials or references,” said Madrid. “As we have gotten requests, we have added them in an effort to be responsive and transparent. We posted all the documents so the public has access to all of the same information.”

In answer to the difficulty CAES cited in navigating large files, Madrid acknowledged they did have reports from public that they were having difficulty.

“In response, we posted to ‘How To’ document,” said Madrid. “If there are problems downloading anything on the website we encourage the public to contact us. We’ve tried to follow up with people quickly as possible so they can download the materials.”

“We held a call with Patience and her team to talk about some of their concerns,” said Madrid. We walked through the process how we would review and consider comments moving forward. We hear their voice and explained how we would include their comments.”

“Hopefully, by fall 2021, we will share the final Environmental Assessment with the public and will have an objection period,” said Madrid. “There will be another opportunity for folks to engage.”

Madrid assured the Independent that the Apache-Sitgreaves National Forests will consider all comments and ideas and incorporate them if within the project scope.

“There are lots of interested stakeholders in the Heber Wild Horses Territory Management Plan,” said Madrid. “We try to find a balance between their needs.”

As of Monday, Apr. 19, the website had received just under 500 public comments.

“The meeting we had with CAES was positive,” said Madrid. “They offered to work proactively with the ASNF on the Heber Wild Horses and we very much appreciate that opportunity to work collaboratively with all stakeholders.”

For more details on the next steps, visit fs.usda.gov/project/?project=18916.

“As we have gotten requests, we have added them in an effort to be responsive and transparent."

“Part of the process is that we read the Forest Service plan, their references and their studies and we have the ability to refute them without our own sources.”

Consultant for Citizens Against Equine Slaughter