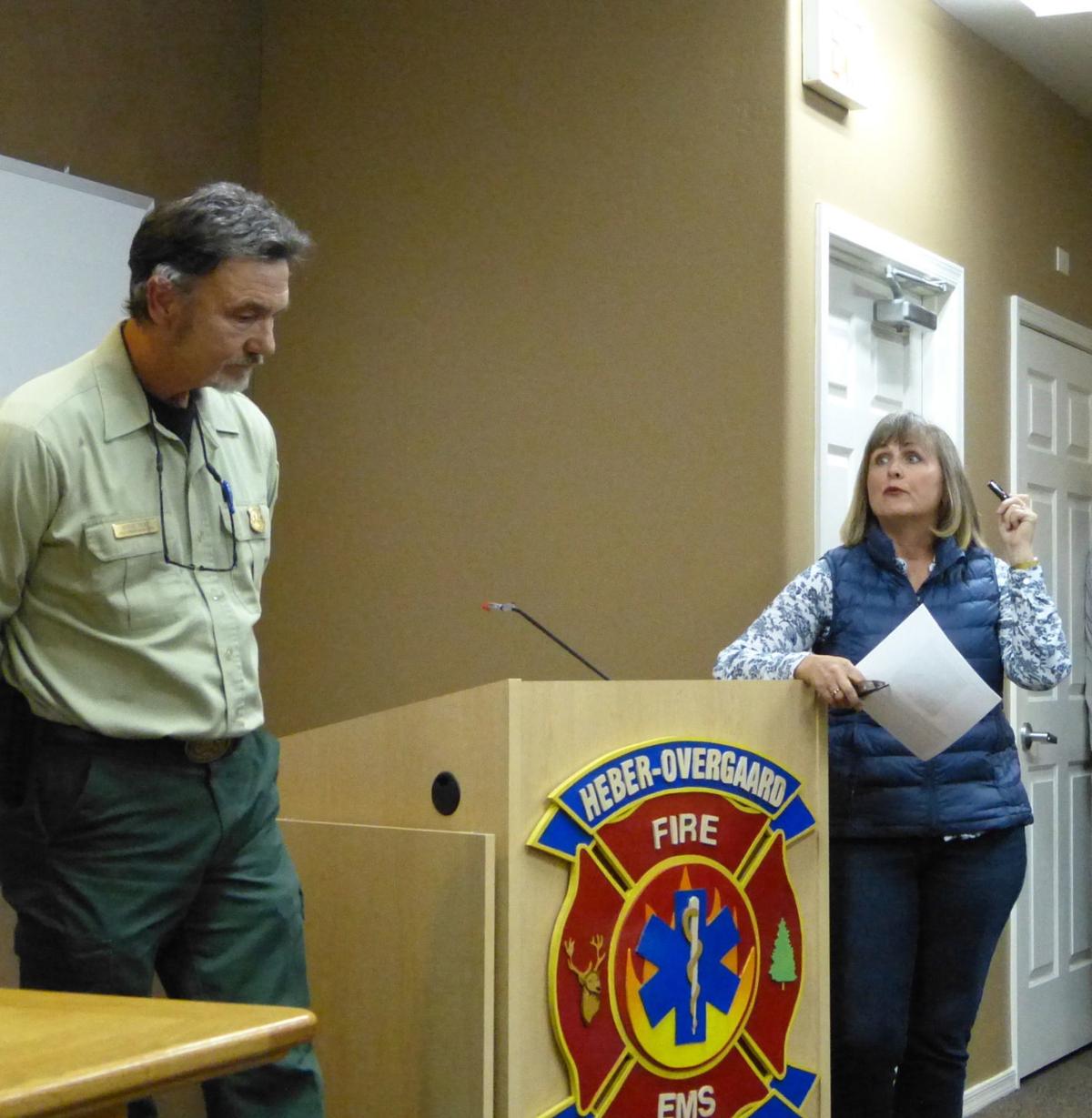 Apache-Sitgreaves National Forests Supervisor Steve Best (left) listens while Payson resident Kathie Reidhead recounts her claim that she witnessed a man shooting at “several blonde horses” at a water hole in the Black Mesa Ranger District last May. She holds a flash drive containing over 150 pictures of the the horses, the man, his truck and his firearm. 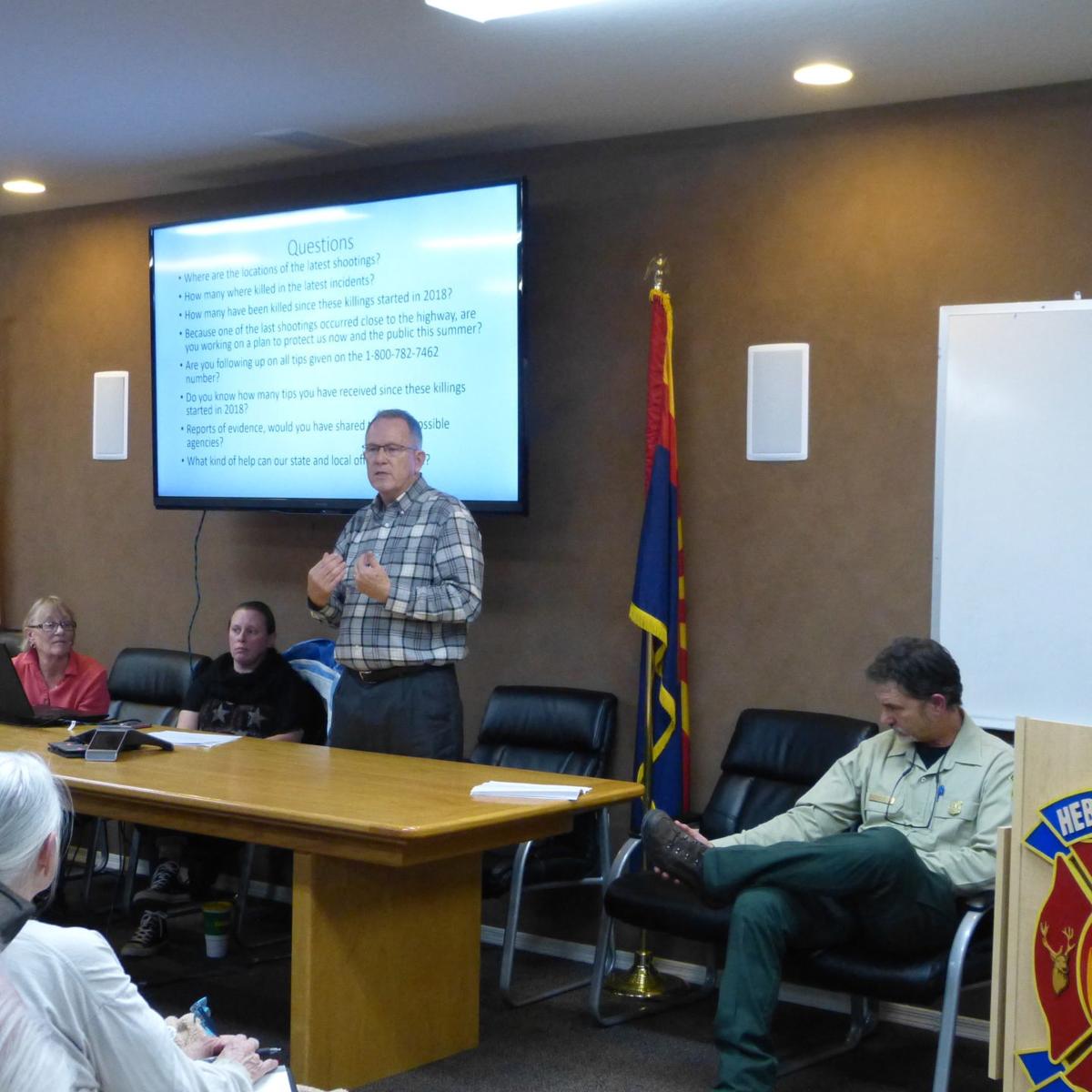 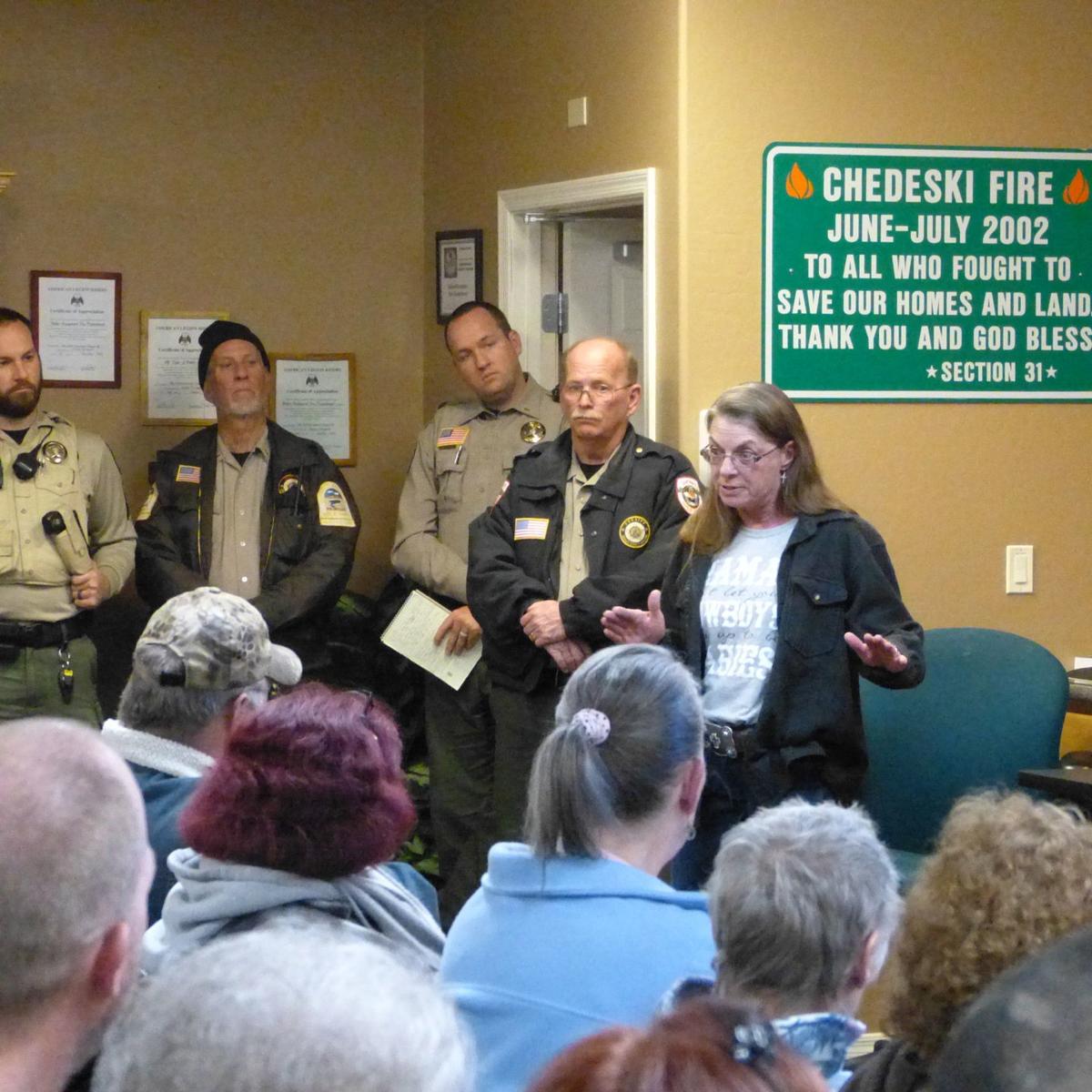 Kathy Gibson Boatman, a member of a local ranching family, asks the community to stop making “unfounded accusations” that the ranchers are killing the Heber Wild Horses. 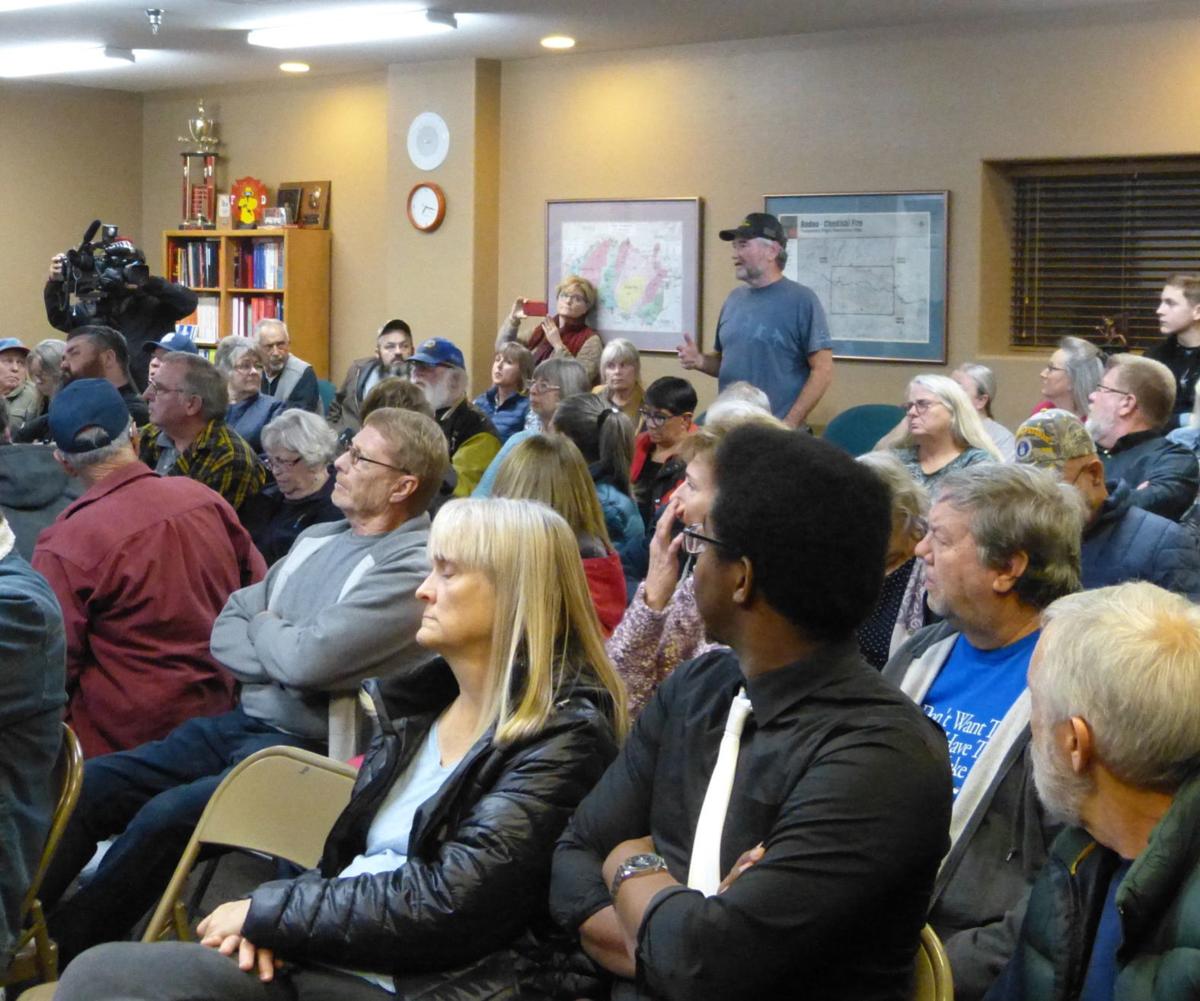 An area resident stands up (back row) to ask Forest Service Supervisor, Steve Best, what is being done to make the forest safer in the wake of 15 horse carcasses discovered with evidence of gunshot wounds between Jan. 9 and 12, 2020. 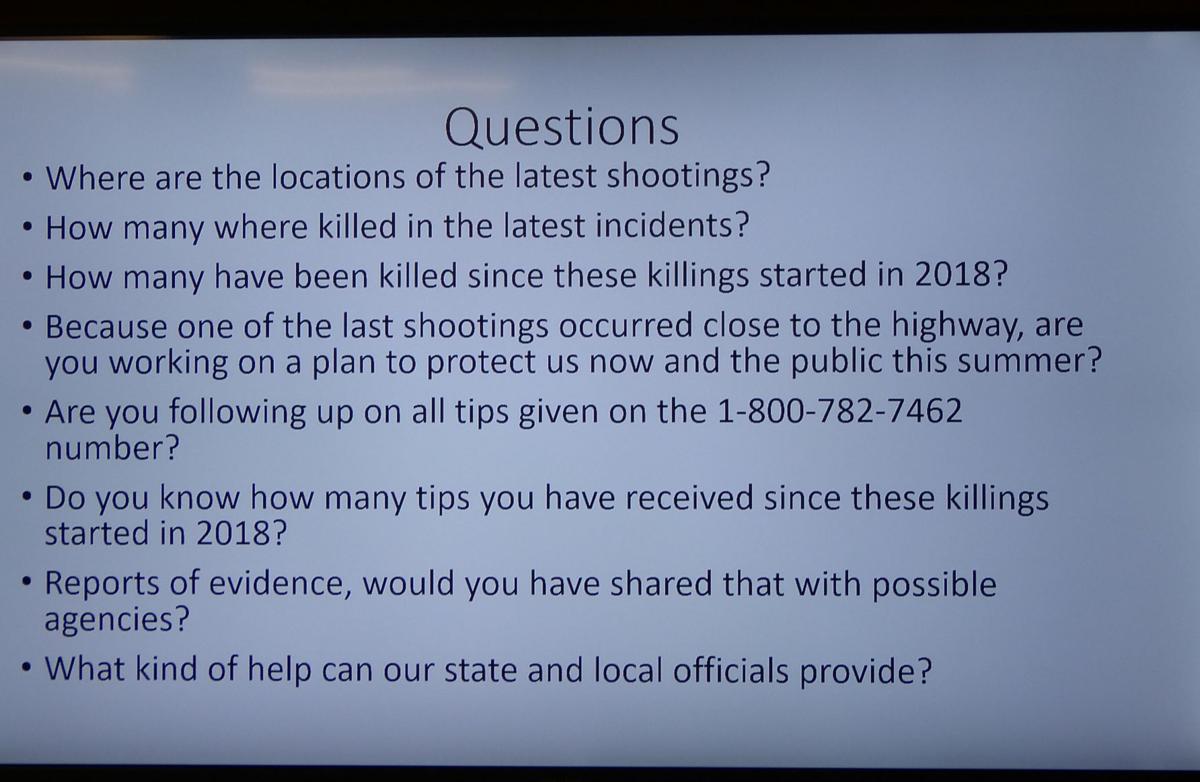 Cathy Franke opened the community action meeting with a slide listing questions about the ongoing investigation. 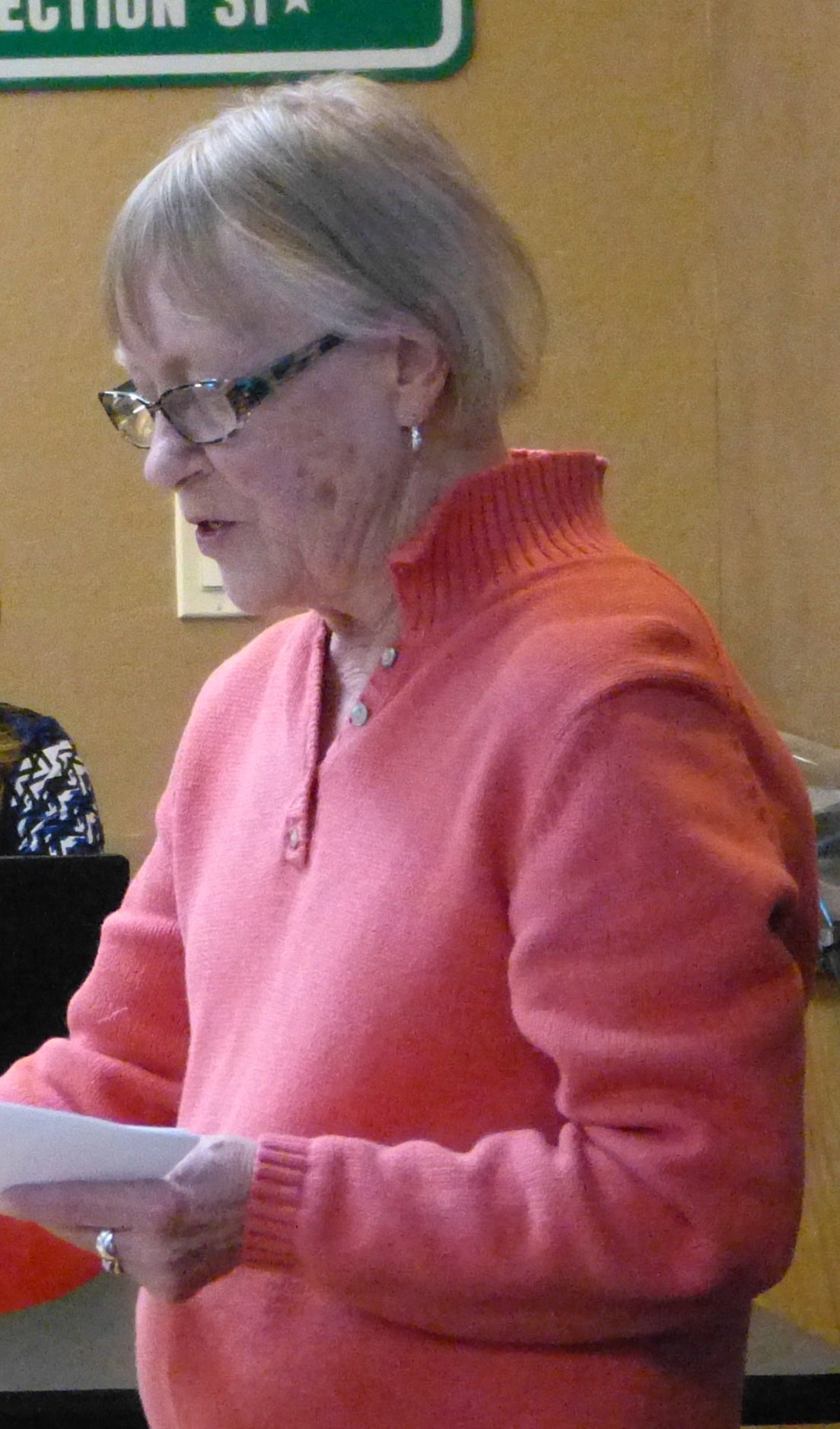 Connie Franke reads the meeting guidelines at the Wed., Jan 22 community action meeting regarding the Heber Wild Horse deaths in the surrounding forest.  She emphasized that the purpose of the meeting was to discuss public safety concerns - not whether the horses should be in the forest. 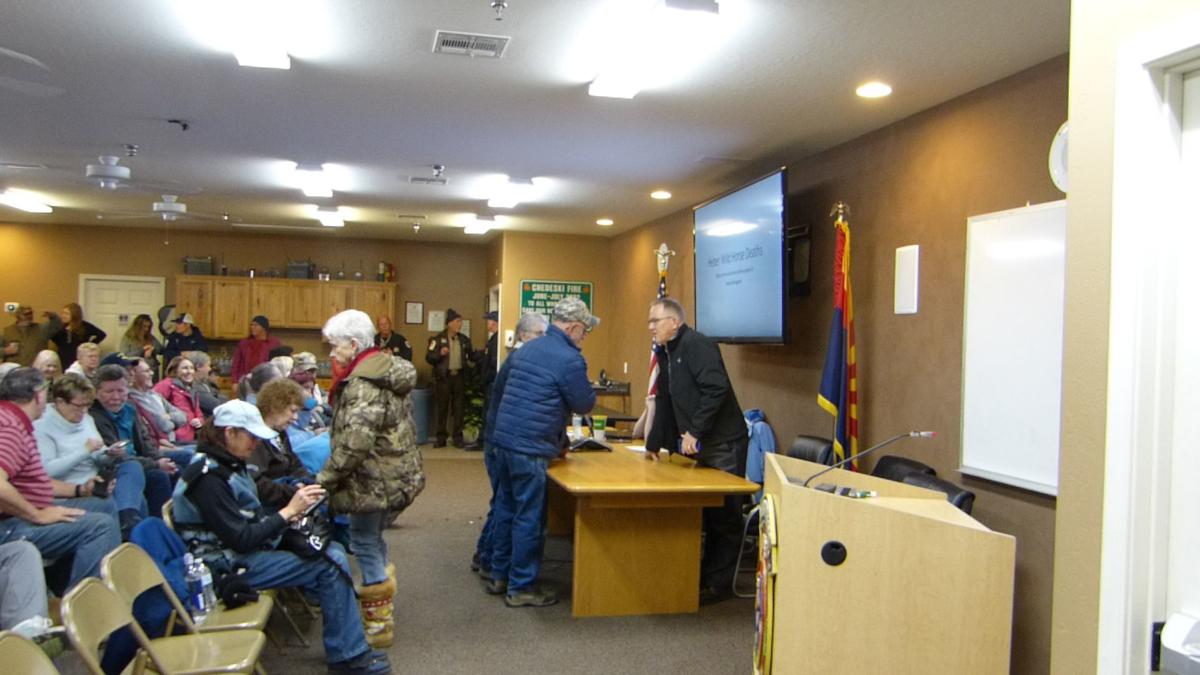 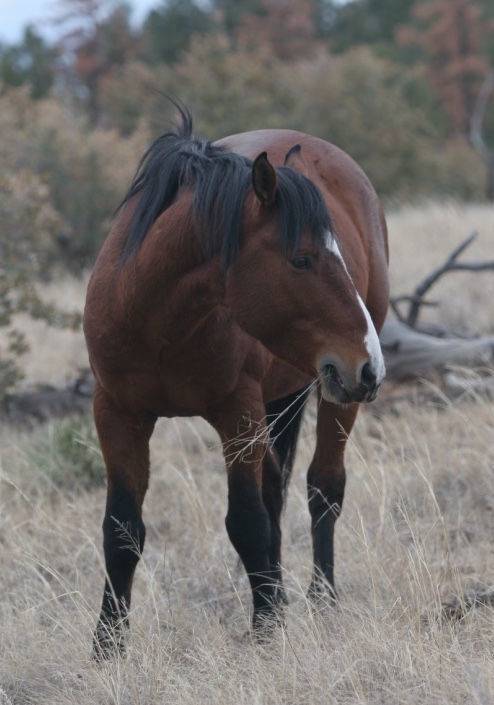 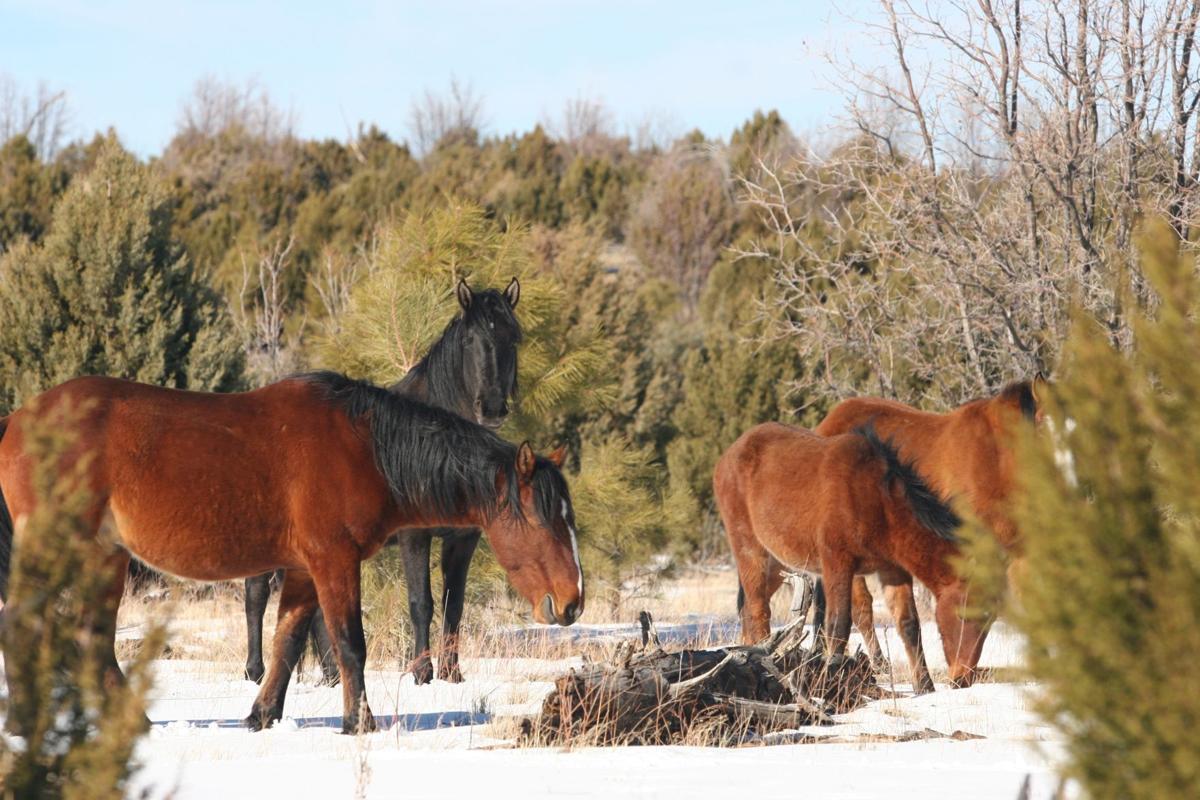 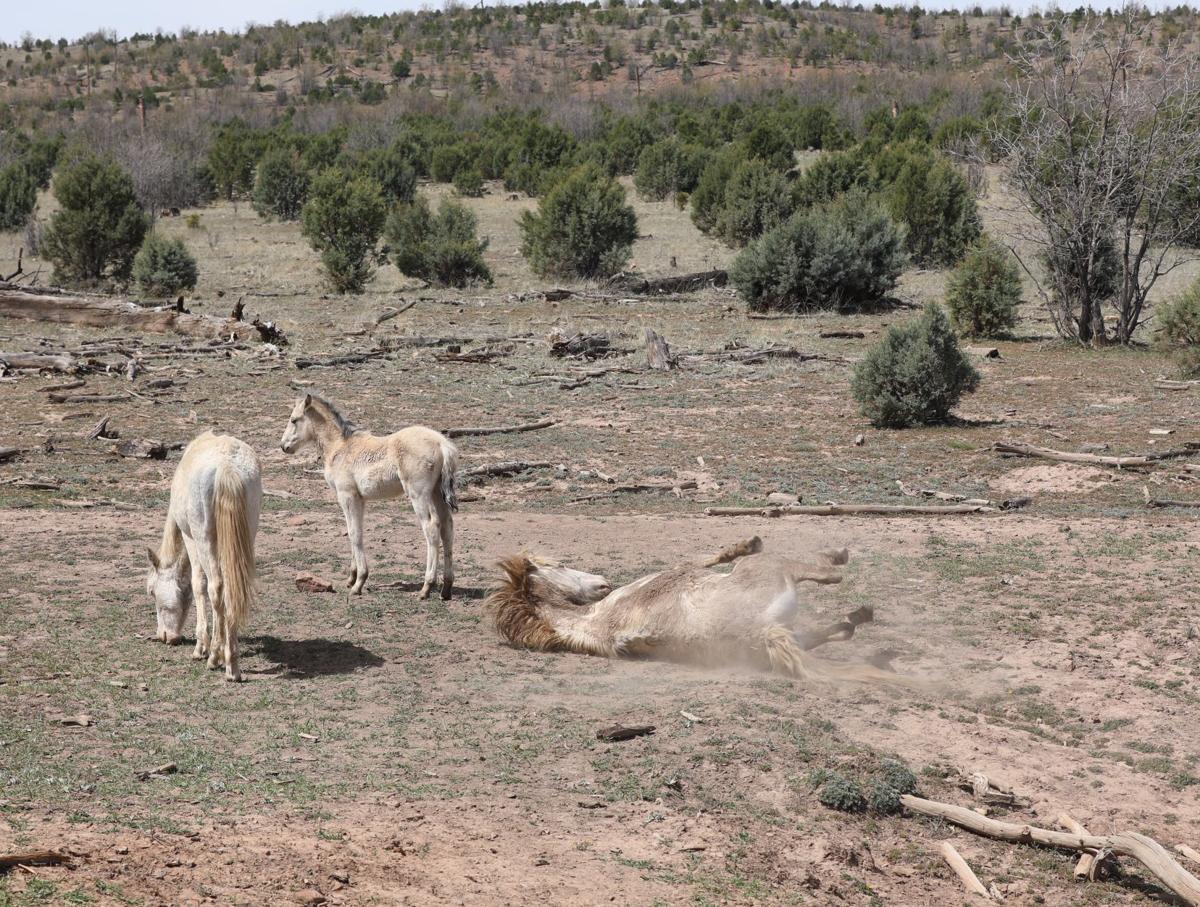 Apache-Sitgreaves National Forests Supervisor Steve Best (left) listens while Payson resident Kathie Reidhead recounts her claim that she witnessed a man shooting at “several blonde horses” at a water hole in the Black Mesa Ranger District last May. She holds a flash drive containing over 150 pictures of the the horses, the man, his truck and his firearm.

Cathy Franke opened the community action meeting with a slide listing questions about the ongoing investigation.

HEBER – Some Heber-Overgaard residents claim the shooting of wild horses is escalating, and that has prompted fear.

The meeting began and ended with a lot of questions, but no answers.

Despite a 15-month ongoing investigation by the law enforcement branch of the Forest Service, shooting deaths have been confirmed for at least 24 federally protected Heber Wild Horses in the Apache-Sitgreaves National Forests. The killings appear to be occurring more frequently, as evidenced by 15 dead horses found between Jan. 9-12. Law enforcement has not named any suspects.

Resident John Franke and his wife, Connie, live east of Overgaard and their home is approximately 2,000 yards from where dead horses were recently found. That has left them feeling like sitting ducks.

“We don’t want to be a victim of a shooting,” John Franke told the Independent before organizing Wednesday night’s community action meeting. “These shootings are too close to home and are getting out of hand.”

The Frankes represent those who feel the horse killings are at a tipping point.

“I don’t think the public is at risk,” Best told the people at the meeting. “The ones doing the shooting know they are committing a crime so they aren’t going to do it when people are around.”

"I'm not saying there's no danger [in the forest]," clarified Best. "Hundreds of people shoot in the forest - there's hunting, target shooting, lots of things. If I saw those guys shooting horses, I wouldn't approach them."

“It is incredibly dangerous to this community,” said area resident Kathy Lewis. “What do you do when you have an eyewitness who says they saw a person shoot at the horses and then be allowed to leave the scene?” she asked in reference to the May 2019 incident reported to NCSO by Payson resident Kathie Reidhead, who also attended the meeting.

During the meeting, Reidhead and others challenged Best’s claim of a safe forest, recounting the May incident and what she felt was a lack of investigation by authorities.

Others praised the enforcement efforts of the Forest Service in what seems to be a crime of opportunity in an area of over 600,000 acres in the Black Mesa Ranger District assigned to one full-time investigator. And, 19,700 acres make up the designated Heber Wild Horse Territory.

“You don’t even know the danger that people could be put in by these shootings,” said area resident Robert Hutchinson who used to lead trail rides through the forest east of Bison Ranch. “USFS Deputy John Lopez has his hands full and I have faith he will get to the bottom of this but it’s still dangerous.”

“Sounds like someone better wake up!” shouted someone in the crowd during the meeting.

“The gist of the matter is that we want to find out who is doing the shooting and catch them,” assured Best. “We need to not attack each other.”

Some members of local ranching families were also in attendance in defense of what they feel have been unfair accusations by the public.

“I am tired of unfounded accusations against ranchers for the shootings,” said Kathy Gibson Boatman. “We have people from across the globe thinking the ranchers in this community are killing horses.”

Other comments included concerns that summer visitors will soon be coming up to the White Mountains to recreate in the forest. People wondered, will they be safe?

What’s it going to take to stop the shooting of Heber Wild Horses on national forest land was the final, question. No one had any answers.

Rewards offered and how to submit tips

Rewards and how to submit tips

“These shootings are too close to home and are getting out of hand.”

“You don’t even know the danger that people could be put in by these shootings."

There are at least two issues here. 80% of the 1,000 horses need to be removed. And hopefully the investigations will get a break and lead to an arrest of the idiot(s) shooting them. As a sportsman, I'm sick and tired of seeing all those free-loading horses ruining wildlife habitat!

One major misconception. These horses are not federally protected. They are feral animals not part of the Wild Horse and Burro Act. The only thing that a person can be charged with is animal cruelty. These unmanaged and invasive species need to be takes back to the Reservation where they came or removed before they damage the range any further.

This is just the Ranchers thinking that public land is theirs!

[smile NEIGHS HAVE IT!