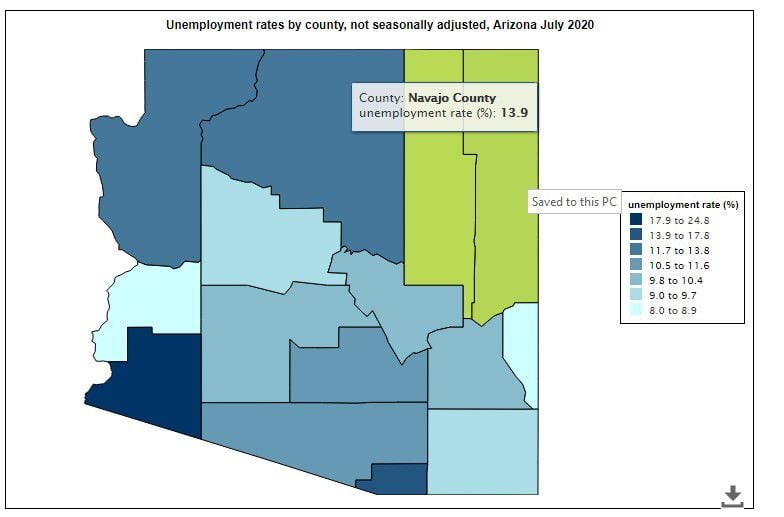 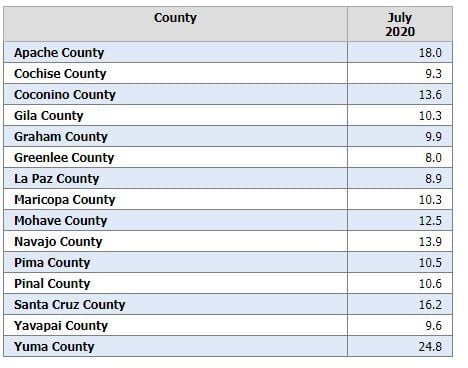 Apache and Navajo counties have lagged ever further behind the rest of the state when it comes to job recovery from the depths of the pandemic.

The local rise in unemployment comes in spite of figures showing that sales tax collections have held steady or even risen.

That’s wasn’t true at the height of the pandemic job loss. In April, the National jobless rate stood at 15% and the state’s at 13%. At that point, Navajo County had a jobless rate of 14 % and Apache County’s rate was 16%.

But the jobless rate stalled or actually grew worse in Apache and Navajo counties as the rest of the economy recovered about half of the jobs lost, according to the most recent US Bureau of Labor statistics figures.

The state and national unemployment rates continued to drop in August. However, the government lags a month behind in releasing county-level figures so it’s unclear whether Apache and Gila counties have narrowed the gap.

Statewide, the August unemployment rate tumbled from 11% to 6% — well ahead of the national average of 8%. However, the big drop in Arizona stemmed mostly from people who gave up looking for work.

The economy created an additional 80,000 jobs in August, with three-fifths of those jobs in government — mostly schools.

However, 150,000 people left the work force — mostly because they gave up looking for work. Economists aren’t sure how to account for the record drop in the workforce. It might reflect people who have given up looking for work — or run out of benefits. It might also reflect a growing number of parents quitting jobs to take care of kids still at home due to school closures. Only about 58% of working-age adults are still in the labor force.

Despite the statewide gains, only 2 of 11 sectors tracked by the Arizona Office of Economic Opportunity have more workers than the same month a year ago – which includes the trade/transportation/utilities sector. Leisure/hospitality is down 64% and professional/business services down 28%.

On the other hand, Gov. Doug Ducey this month released a report showing Arizona with the sixth-best economy in the nation. Arizona rated well when it came to unemployment and five year growth in state Gross Domestic Product. Arizona’s major problem on the ratings stemmed from its 14 % poverty rate – among the highest in the nation.

The Grand Canyon Institute also release a report concluding the pandemic has revealed the deep flaws in the state’s unemployment system, among the most restrictive in the nation.

The state’s $240-per-week maximum benefit remains the second-lowest in the nation. Moreover, the state bars benefits for part time, self-employed and under-employed workers.

The state’s restrictions on unemployment cost it some $230 million state unemployment benefits and $900 million in federal support through the CARES Act, according to the Grand Canyon Institute report. Moreover, Some 40,000 to 110,000 Arizona workers became “underemployed” due to cutbacks in the hours worked – on average from 38 hours a week to 21. This made them ineligible for unemployment. All told, the restrictions on the state’s unemployment system cost the state $2 billion in economic activity and cost about $70 million in lost state and federal revenue, concluded the Grand Canyon Institute’s report.

The expiration of the CARES Act’s jobless benefit increase will hit Arizona especially hard, given the low level of benefits here. The state runs the unemployment system, financed by a tax on employers. The Arizona legislature has opted for a minimal, pay-as-you-go system, which generally doesn’t build up a surplus in the fund during boom times – leaving the state unusually vulnerable to downturns.

The state has the second lowest benefit cap, the lowest earnings allowance and the highest earnings eligibility threshold in the country.

The Grand Canyon Institute urged a series of reforms include:

• Raising the benefit cap half of the workers average weekly wage prior to losing his or her job up to a maximum of $490 per week.

• Increasing the amount of money a person collecting unemployment can earn without losing benefits. The current limit is set at $30. But most states set the limit at about one-quarter of the weekly benefit amount.

• Raise the wage tax that funds the system enough to generate an extra $100 per covered worker annually.