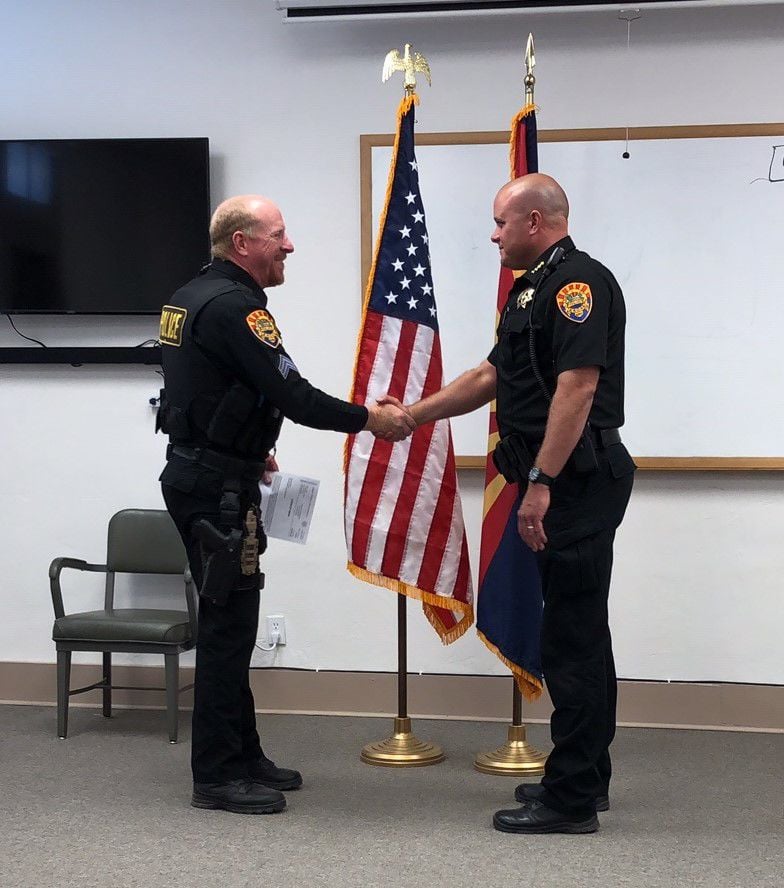 The newly sworn in Eagar Police Chief, Shane Bevington, (right) shakes hands with Sgt. Jones (left) on April 27, 2020. Bevington was most recently a Commander in the Apache County Sheriff’s Office. 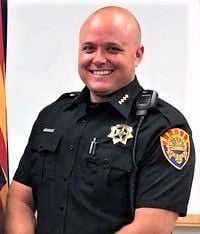 The newly sworn in Eagar Police Chief, Shane Bevington, (right) shakes hands with Sgt. Jones (left) on April 27, 2020. Bevington was most recently a Commander in the Apache County Sheriff’s Office.

EAGAR – After months of not having a replacement for Chief Mike Sweetser, who retired in December after nearly three years of service, the town of Eagar officially welcomed Shane Bevington as their newest Police Chief. Bevington was sworn in by the acting Interim Police Chief, Sgt. Steve Jones, and began his service on Monday, April 27.

The offer for the position had originally been made to applicant Brannon Eagar, who accepted back in February. He then later declined it after further consideration, opting to stay in his current position as Chief Deputy for the Apache County Sheriff’s Office (ACSO). Eagar has been with ACSO for over 17 years, which is just three years shy of a normal retirement according to the AZ Public Safety Retirement System guidelines. The Independent tried to reach Eagar for comment on the issue but was unsuccessful.

Shane Bevington also comes from the ACSO, having served as a Commander. This will be his first time taking a position as chief of police.

“We’re excited and I think he will do a good job,” Mayor Bryce Hamblin said of the new police chief.

When asked in an interview why the town of Eagar seemed to be pulling applicants from ACSO, Mayor Hamblin had a simple explanation.

“It’s just who applies,” Hamblin said. “I think it’s important that people like it here. You don’t want constant turnover.”

There were not many applications for the position of chief of police, and the town preferred to hire local candidates who lived in the area and wanted to stay. Bevington is currently moving from St. Johns to Eagar and said in an interview that he had always wanted to live closer to the mountains and be in the Round Valley area.

“I wanted to develop myself professionally, and I’ve always liked the town of Eagar,” Bevington said. “It seemed like a great town and a great opportunity.”

Bevington enjoys hiking, fishing and camping with his family and said he plans to stay in Eagar long-term and hopefully even retire in the area.

“Everybody here in Eagar has just been extremely welcoming and helpful,” Bevington said. “I think I made the right choice.”

“I wanted to develop myself professionally, and I’ve always liked the town of Eagar. It seemed like a great town and a great opportunity.”

Wow...everyone pretty much knows why Eager didn't get the job. Kind of weak reporting here. Did you PR the minutes of any meetings by the hiring committee?