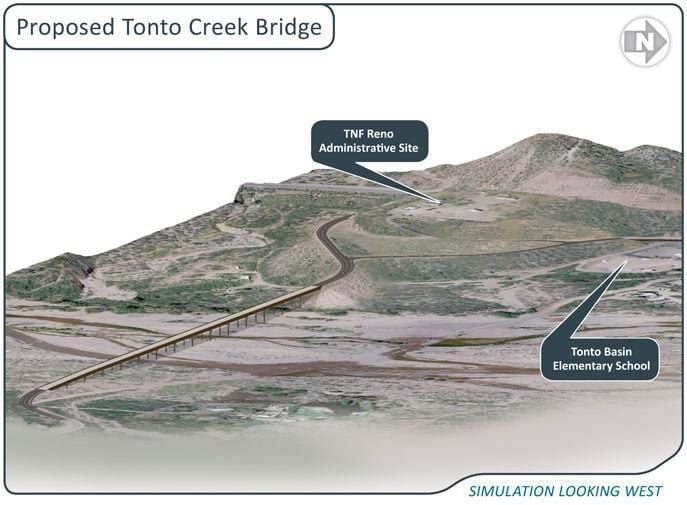 A rendering of what the proposed bridge would look like in Punkin Center. 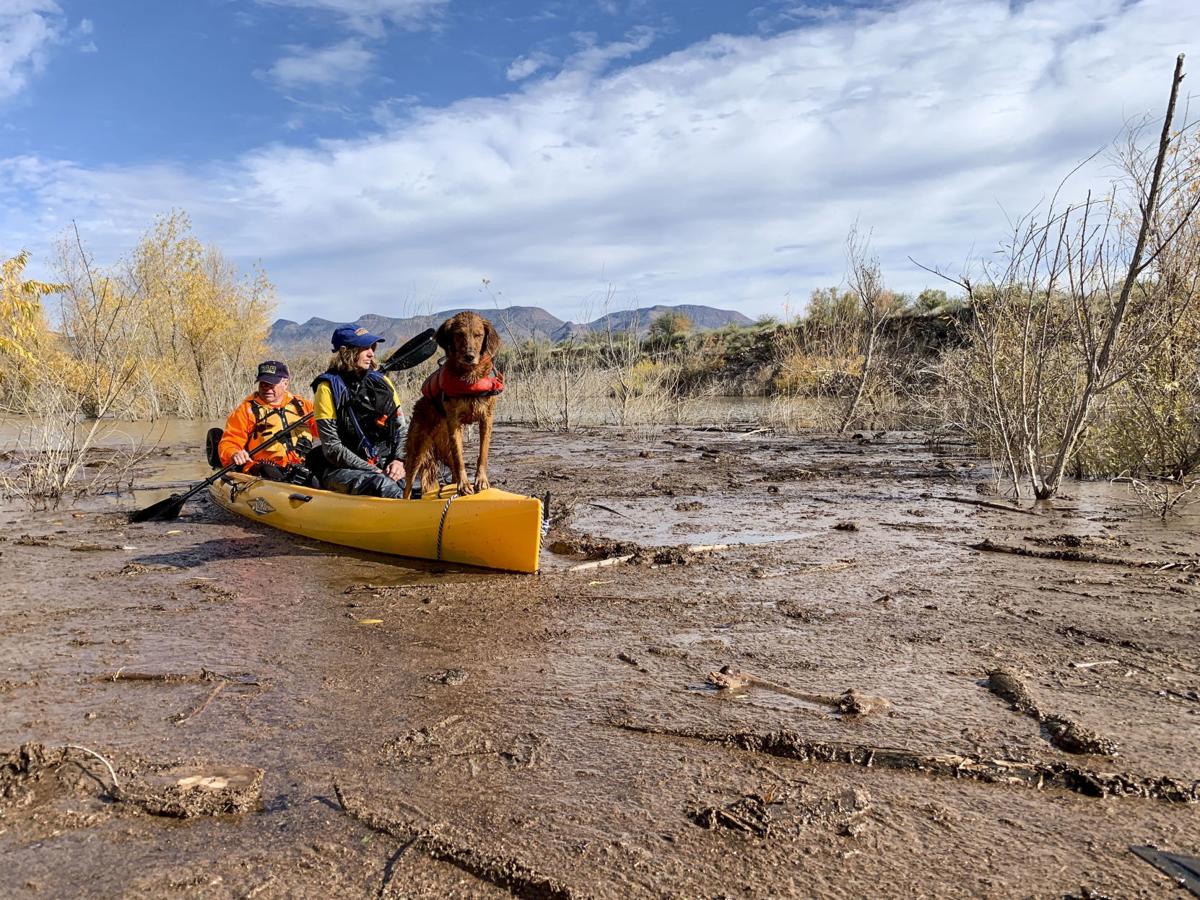 Lawmakers are asking for money to build a bridge over Tonto Creek in Tonto Basin. Above, Debee Henschen from Coconino Search and Rescue and her dog Loki, search the creek in December for the body of a Show Low girl washed away by floodwaters.

GILA COUNTY — The big bucks needed for a bridge over Tonto Creek in Tonto Basin/Punkin Center have become a bouncing ball. Most recently Gov. Doug Ducey passed the proposed $20 million project on to the U.S. Department of Transportation.

A press release Jan. 8 from the governor’s office stated Ducey sent a letter to Elaine Chao, secretary of transportation, “urging her to prioritize funding for the Tonto Creek Bridge in Gila County.”

The governor suggests the project would be an “excellent candidate” for part of the $1 billion Better Utilizing Investments to Leverage Development Grant program authorized in the fiscal year 2020 spending bill by President Trump in December.

Ducey’s letter pointed out eight people have died since 1995 while attempting to cross the flooded creek — most recently the three Rawlings children who were visiting the area in November.

“Gila County has applied for several federal grants for the project, including a BUILD grant, but were denied. The most recent denial came just weeks before the latest tragedy,” Ducey wrote to Chao.

The county has received some funds from both the federal and state government for the Tonto Creek bridge project, allowing it to do environmental studies, purchase rights of way and have the structure designed. However, none of the funds awarded have been enough to complete the entire project.

While Ducey’s letter to Chao could be interpreted as a finger shake of shame at the federal government for its rejection of the funding requests, he won’t commit the state to funding the project either. Instead, he said, “We’re going to look at every other request and properly prioritize,” according to an article by Howard Fischer of Capitol Media Services in the Dec. 24 edition of the Payson Roundup.

The statement was made at the dedication of a $1.7 billion freeway to benefit Phoenix commuters.

Fischer reported in the same article State Rep. David Cook, R-D8, introduced HB 2056 Dec. 17 to set aside $20 million for the Department of Transportation to build the bridge.

However, at the Jan. 7 meeting of the Gila County Board of Supervisors James Menlove, county manager, said Cook had requested a letter from the county stating it would take part in funding the bridge. Menlove told the BOS he responded that $3 million is available, committed by earlier action by the supervisors.

Gila County Supervisor Woody Cline, District 3, who serves as chair of the board, said Cook is now saying the area’s legislators are asking for $15 million for the project and want the county to be responsible for the $5 million balance.

According to state records, $15 million is the amount Sen. Sylvia Allen, R-D6, is requesting in SB1035 for Tonto Creek Bridge Funding, which she introduced Dec. 19. Cook’s bill requests $20 million and is co-sponsored by 12 legislators.

Cline also talked with State Rep. Walt Blackman, R-D6, about the bridge. He reported to his fellow supervisors that Blackman said the state could provide the $20 million needed for the project.

Gila County Supervisor Tim Humphrey, District 2, representing the area of the bridge site, said he recently took representatives from Sen. Martha McSally’s (R-AZ) office on an extended tour of the site and creek.

“There have been lots of conversations with many on the bridge and a work session is needed,” Humphrey said.

“All of us are getting pushed from many different parties on the issue, so a work session is needed to decide on the same answers,” she said. “The county needs to push as hard as it can to have the state do as much as it can up front.”

Cline summed up the bouncing ball of funding a bridge over Tonto Creek by saying, “We just have to wait to see.”

An Arizona Senate floor vote of 28-2 Jan. 30 approved Dist. 6 Sen. Sylvia Allen’s bill, SB 1035, to provide $15 million in funding for a bridge across Tonto Creek in Tonto Basin. With the approval, the bill goes to the House, where Dist. 8 Rep. David Cook’s HB 2056 is still traversing committee hearings. The House bill also seeks $15 million for the bridge project.

Understand the need for the bridge. The local property owners should be assess on the cost of the bridge. That 20 million to benefit how many??? Hy 260 between Show Low and Pinetop could use that money for a resurface. How many would benefit from that? Honestly how many residents in the state would use that bridge? I am sure that is needed but why not asses those who do use it, like a toll bridge.

Perhaps the county residents could start a #GoFundMe bridge build?

Society is either going to be regulated or priced out of existence.

Anyone heard when the driver will be charged and billed under the "stupid driver law"? Or are they working on an involuntary manslaughter charge?