CONCHO — In a phone conversation with the Independent last week, Sergeant Dayson Merrill of the Apache County Sheriff’s Office confirmed that Denise Caroline Blackwood, 45, of Concho, was arrested Monday, Oct. 21, in relation to a number of deceased dogs found in a storage container on a property she had allegedly been renting near Concho.

More than seven individual parties, some area residents, contacted the Independent following Blackwood’s arrest because they say this isn’t an isolated incident. Most of the callers insisted on remaining anonymous for fear of retaliation.

Their accounts and concerns are similar in nature and detail. They claim she kept multiple animals, mostly dogs, that were left without food, water or shelter on numerous occasions.

When neighbors noticed the dogs at Blackwood’s place had stopped barking, they went to the property to investigate. The smell of death met them at Blackwood’s rented home on a county road off of Apache County Road 5020. Blackwood may not have been living at the property full-time.

There they found “two Connex storage containers with five dead dogs and a myriad of other animals in various stages of decomposition,” according to Dan La Grange and Dennis McTigh. “Some animals were also outside the container in pens, cages and some in the corrals.”

Every animal at the home was dead, except for an emaciated goat that had no water.

The Independent contacted ACSO in an effort to obtain copies of the Sheriff’s report for the Oct. 21 incident and was informed by that the report was not yet completed but “additional information” would be available last week. No further information was released by press time, but the Independent received this press release after the print edition of the paper was completed. 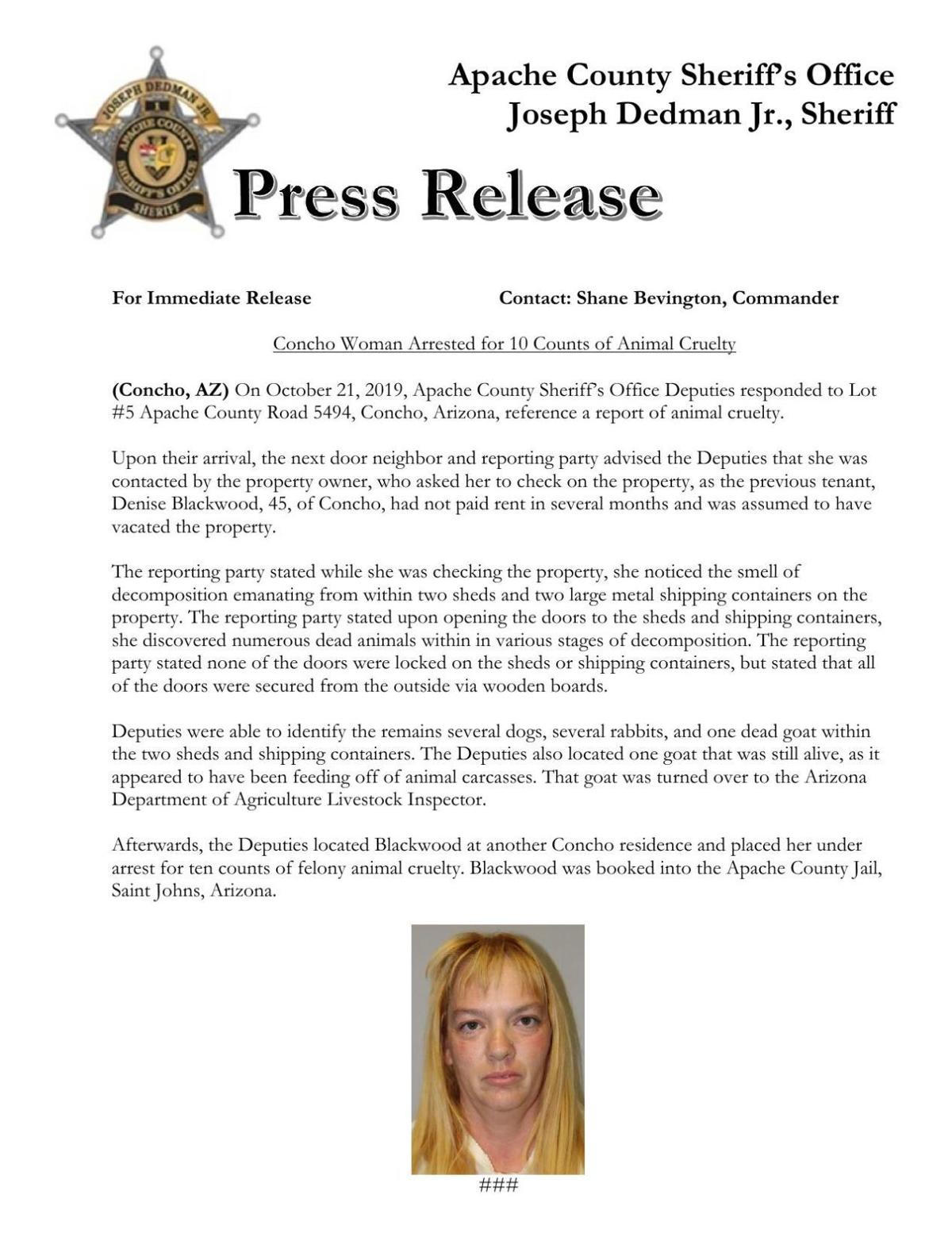 Currently, Blackwood is not incarcerated, as confirmed by ACSO.

It also appears this is not the first time law enforcement has been notified about animal neglect and cruelty that has allegedly occurred to animals under Blackwood’s care.

ACSO confirmed that Blackwood was arrested in Apache County two times previous to the October incident. The Independent has requested copies of reports for the March 2018 incident and Oct. 21, 2019 incident.

The Independent obtained a copy of the ACSO January 14 Crime Report #19-01-0059 written by Deputy A. Orona.

Excerpts from the report indicate that an individual contacted dispatch in reference to “a pen of approximately 10 or 11 dogs located in the area of County Road N3540.” The individual also reported that he witnessed “4 or 5 deceased dogs and several more that were injured.”

Deputy Orona traveled to the location and reported seeing a “horseshoe-shaped pen outside that was subdivided into smaller pens approximately 4’ x 4’ made out of what appeared to be pallets.” Of the seven dogs observed, the deputy reported seeing three with “injuries sustained to the neck area caused from small diameter rope being tied around the neck.”

Orona also indicates finding one horse and one calf in small corrals to the east of the pens.

The horse was allegedly suffering from severe malnutrition and the calf appeared to have a swollen abdomen, possibly also from malnutrition according to the account of the report.

“None of the animals had adequate food or water containers and I saw little to no shelter,” the deputy wrote.

The animals were photographed “as they were” and steps were taken to obtain a search warrant for the property.

Deputy Prieto was contacted as well as St. Johns Animal Control who contacted Coconino County Humane Society who agreed to take the surviving animals with the exception of the horse and calf who were taken to Apache County Fairgrounds in St. Johns. Livestock Inspector Kevin McFee was said to have transported the other animals to Coconino County.

Allegedly a search warrant was issued by Judge Gregory of Round Valley Justice Court. Deputies Prieto, Wiltbank and Padilla were said to have served the warrant on the property.

Other segments of the deputy’s narrative indicate that he made contact with Ms. Blackwood on a county road. This followed a report to the Sheriff’s Office that Blackwood’s vehicle was stranded 1.5 miles from the property she had allegedly been traveling to and from.

The deputy stated that he obtained Blackwood’s physical address based on what was registered to the PO Box on record. He traveled to her home and “was met by Denise Blackwood in the front yard.”

He questioned her about the abandoned vehicle and she explained that he and friends were working on the vehicle and they were “testing it and it broke down,” according to the narrative.

She was allegedly asked about the animals and indicted she was aware they were there, informing the Deputy that “they were on the property when she bought it eight months ago.”

Allegedly, Blackwood stated that she “tried to go out to the property once a week.” The deputy told Blackwood that he “observed the dog food poured on the ground in every pen except for the ones with deceased dogs,” — indicating she knew some of the dogs were dead.

The narrative continues, stating that “she made the cognitive choice not to place food in the pens. She was aware of the dogs that were deceased. She had taken responsibility for the animals.”

Seven dogs, one horse and one cow were seized from the property.

More information will be provided as it becomes available from ACSO and the County Attorney’s Office.

“It is a shame; we are all animal lovers but this is not love for animals,” says La Grange. “I also hear she has more dogs in her new place.”

This is a terrible injustice! Those animals deserved a better life. How they ended up in the hands of such cruelty,heartlessness, and indifference is beyond me. Animals are feeling and emotional creatures. They know love, pain, fezr, loss, the list goes on. How could someone feel doing that is remotely okay?. She needs serious help if she doesn't know better, and jail time if she does. SMH

I agree her punishment should be the same as was given to the poor animals she abused. I feel ashamed that the so call most intelligent species on the planet behaves this way towards other animals, what goes on in someone's head for them to behave this way.

This needs to be prosecuted to the fullest extent of the law. Not the first time, for severe animal abuse and has a reputation for trashing houses too. Yet here we are again with severely abused animals and another trashed house. This will reflect on how Apache county follows through with upholding the law and prosecution of such. Mental health is not an excuse and blame is not an excuse. How can anyone stand by and continue to allow this person to have animals in her posession. So glad this story came out, but lots more to tell!

She lied, she moved all those dogs on that property when she bought it. She made her children build the 4x4 pallet cates on that property. There are dogs burried on all her properties too. Not just above ground.

This just breaks my heart. I feel so terribly sad for those animals, lost, abused and left to die. Sickening, just sickening. I hope justice is met. (This comment has been edited by WMI)

She is a pathological liar. She can look you right in the eyes and lie to you. All those animals were taken there by her, they were not there when she rented the place, but what difference does it make. She has an excuse for everything, never her fault, and can talk the ear off a mule. She needs to be put away, she repeats and repeats what she does, trashing others' properties and killing animals, and the county is allowing her to do it. It needs to stop now!

Why is she still out walking free? Not a single thing has happened to her!