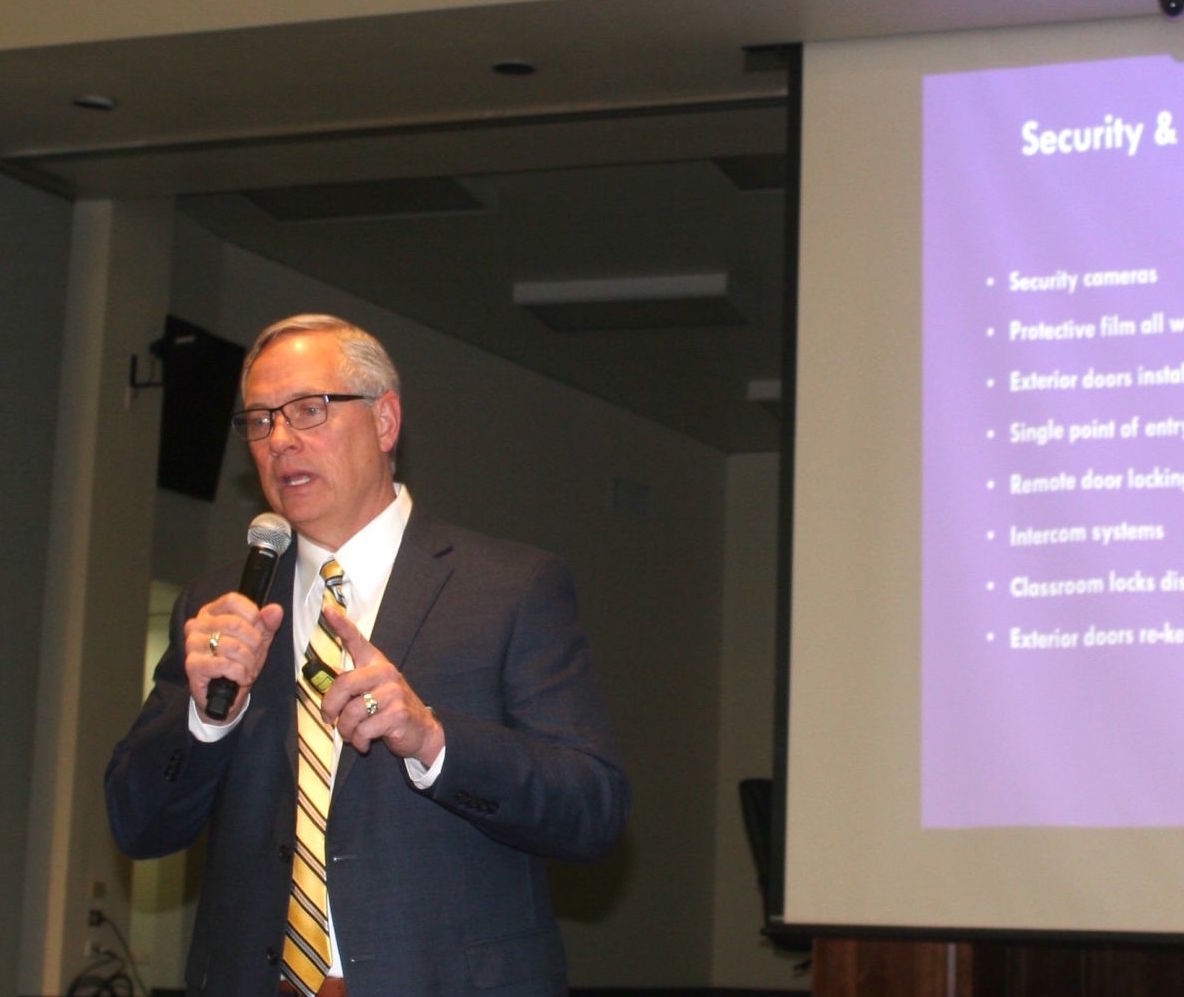 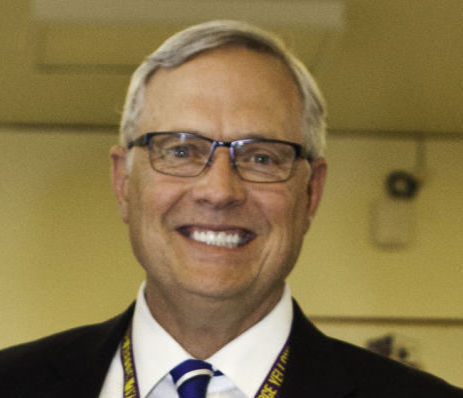 LAKESIDE – A July 11 Truth in Taxation Hearing by the Blue Ridge Unified School District board make an abrupt U-turn when more than 20 citizens showed up to voice concerns about a proposed hike in the primary tax rate.

The hearing was held as part of a regular school board meeting that also included a presentation on the annual budget.

Three of those in attendance, Janice Dee, Martha Eberly and Bill Bohn, spoke before before the board during the Call to the Public section of the meeting. Dee and Eberly said that the information presented was not very clear regarding the budget or the reason for the tax hike.

“We all showed up but the slide show on the budget adoption was very confusing,” says Janice Dee of Pinetop. “Before Brenda went through all of the slides, the board said ‘We decided not to do the levy,’” (Brenda Thomas-Martinez is the district’s director of finance).

"We're listening and we heard you; we will not go forward with an Adjacent Ways levy without sufficient participation and support."

“When the board saw Janice start to talk and ask questions, I saw their face drop,” recalls Pamela Branch of Pinetop. “I got the feeling the board was surprised so many of us showed up.”

“I saw pages and pages of numbers on that big screen but I still don’t know what the $730,000 would have been for,” added Branch.

At some point during Call to the Public, Dee says she asked Superintendent Wright, “Are you going to print a retraction in the newspaper?,” referring to the board’s decision to eliminate the levy.

More about the levy

The proposed levy, if passed, would have meant a “substantial increase in taxes over the 2018-19 levy of $350,000,” according to Blue Ridge public relations officer Nancy Stidham in a July 13 press release submitted to the Independent.

“The amount proposed [$730,000] … will cause Blue Ridge Unified School District’s primary property taxes on a $100,000 home to be $40.25,” according to the notice published in the June 28 legal section of Independent. This would be an increase from $11.72 in property taxes for the same home, which is roughly three times more.

The additional funding would have been applied to fiscal year 2019-20 through the Adjacent Ways tax levy. Adjacent Ways monies are specifically “for improvement of public ways adjacent to school property and egress of fire equipment and buses,” according to Arizona Revised Statutes (ARS 15-995).

“Adjacent Ways is an additional source of revenue that is obtained through a special tax levy to enable districts to address needs relating to the ingress and egress to their properties,” explained District Superintendent Dr. Michael Wright in a phone interview with the Independent on July 24. “That could include fire lanes, bus lanes as well as school entrances, exits, curbing and drainage.”

Any project costing more than $50,000 has to be submitted to the School Facilities Board (SFB) and approved, according to Truth in Taxation laws.

Since the district has suspended the Adjacent Ways levy, the secondary tax rate has also been updated to reflect a decrease from $2.2393 in FY 2018-19 to $2.17 which should come as good news to those expressing concern about the original proposal.

What does the district need additional funds for? That’s the $730,000 dollar question that seems unclear in the minds of some area taxpayers. Since the July 11 hearing, the district has been making an effort to answer this question – in detail including back and forth dialogue with citizens.

“The $15 million (from the 2016 bond funding) that we received only met about half of the immediate facilities and capital expenditure needs, district wide,” explained Wright in a telephone interview Wednesday. “Only the most pressing and critical projects were addressed.”

“As a result of severe capital reduction by the state, maintenance was deferred for nearly a decade,” he adds.

The Adjacent Ways funding was for an “expensive, complicated civil engineering project to address flooding and drainage in the high school parking lot area,” says Wright.

“The drainage structure that runs through the center of the parking lot overflows during monsoons and after the snow melts and becomes impassible for students and staff,” he explains. “It also holds water and freezes during the winter which is just as unsafe creating trip hazards and falls due to the ice.”

Rumors of an increase in school taxes drew a group of concerned citizens to attend the Truth in Taxation Hearing on July 11 held in the Blue Ridge Unified School District (BRUSD) Governing Board Room. Director of Finance Brenda Thomas-Martinez presented the updated 2019-20 budget proposal for the District. Superintendent Dr. Mike Wright was available for questions.

Because of the expression of public concern, the BRUSD Governing Board eliminated the levy for Adjacent Ways Funds from the 2019-20 budget. This is a reduction of $730,000 from the original budget proposal. The result of this action is a reduction in the BRUSD primary tax rate from 3.96 to 3.852.

District operational costs go up every year. Prop 206 increases to the minimum wage cost to the District about $50,000 per year and are not funded by the State. According to Wright, this is just one example of the impact of unfunded mandates on operational expenses. “Inflation has also served to increase operational expenses. As insurance, fuel and other costs increase, budgetary shortfalls follow,” said Wright.

The District is seeking ways to continue school improvement and to maintain the current level of academic and extracurricular programs in the face of budget shortfalls without increasing taxes. The proposed override on the November ballot, if approved, will continue current funding levels but will not increase taxes. At the July 11 meeting, Board President Dave Merrill stated, “It was never the Board’s intention to increase taxes.”

According to Wright, since 2015, BRUSD taxpayers have benefitted from economies and savings of almost $6 million derived from several sources. State Facilities Board (SFB) projects provided $3.2 million in State funds. The District’s high credit rating was applied to refinance the bond and resulted in a reduced principal balance with a lower interest rate at a savings of $1 million. Another $1 million in fees was saved when the bond went to market. The consolidation of facilities and positions, along with switching insurance administrators, has saved $725,000.

“We always strive to involve the community,” said Wright. “We are listening. The BRUSD Governing Board’s intent is to keep the tax rate constant even with the override.”

Fixing the area will require a significant investment from the district’s capital funds, School Facilities Board (SFB) funds and Adjacent Ways funding, he said.

“The board and I have been working on getting this funding for about a year and a half,” assures Wright. “Civil engineering plans have been developed and our architectural consultant has taken the plans to the SFB.”

“We need more SFB support than anticipated because the project will cost somewhere in the scope of $3 million. This is why we decided to pursue Adjacent Ways funds which are specifically for this type of repair,” he explains.

On July 12, the district submitted a press release to the Independent explaining the purpose of the proposed increase and the district’s subsequent decision to “maintain the current tax level.”

“Rumors of an increase in school taxes drew a group of concerned citizens to attend the Truth in Taxation Hearing,” stated a previous release, which went on to state that the board made the decision to suspend the Adjacent Ways levy which would have resulted in the property tax increase.

“When the impact of the levy was contemplated, Wright took immediate action to reduce the levy back to the present level, consistent with the Blue Ridge Governing Board’s commitment to maintain the current tax level,” Stidham added.

On July 23, the district governing board held a study session to discuss district-wide goals for the 2019-2010 school year. At the conclusion of that meeting, board members officially voted on a revised budget reflecting the elimination of the tax increase through Adjacent Ways funding.

The board approved the revised budget with a unanimous vote.

“At this point, we have to live with the drainage issues ‘as is’ or the state will have to step up,” Wright said. “I will continue to push the state for SFB funding for this project.”

If the district receives SFB funding, they may return to pursuing an Adjacent Ways tax levy said Wright. The process would begin again with the formation of a Superintendent’s Committee. Members of the public would be asked to participate and provide input.

If enough support is shown, said Wright, the district will move the topic to the board agenda for discussion. If the board approves, a new Truth in Taxation hearing would be announced and the hope is that citizens would again be willing to participate in the process.

At the end of the day, Wright wants the taxpayers to know, “We’re listening and we heard you; we will not go forward with an Adjacent Ways levy without sufficient participation and support.”

Nice try. You can only fool people for so long.

Dang...somebody's relative won't be getting that pavement contract....😟