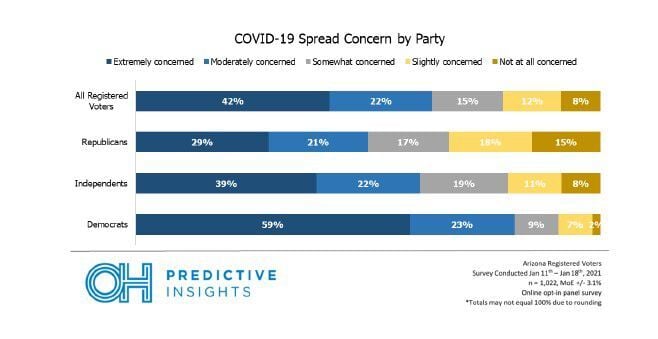 Arizonans remain deeply concerned about the spread of the virus — but it still worries Democrats a lot more than it does Republicans.

Overall, 42% said they’re “extremely” concerned, as Arizona becomes a national hotspot and the number of new cases, deaths and hospitalizations begins to decline slowly from an all-time high in January.

However, Democrats express far more concern than Republicans, with Independents falling somewhere in the middle, according to a recent poll by OH Predictive Insights (OHAI).

Roughly 82% of Democrats but only 50% of Republicans expressed concern.

“I have said it before and I’ll say it again,” said pollster Mike Noble. “This virus does not care about political party, ethnicity, religious affiliation or economy status, but it has been treated as a political football since the beginning. Throughout the pandemic, GOP voters have been consistently less concerned than voters of other parties.”

The continued split could pose problems for the rollout of the effort to get most of the population vaccinated by this summer. So far, Arizona has received about 1 million doses and vaccinated about 7% of its population.

However, doctors say a worrisome number of people appear reluctant to get the vaccine, although the current vaccines confer 95% protection with minimal side effects. The vaccination campaign won’t contain the spread of the virus until somewhere between 70% and 90% of the population is protected — either through a vaccine or by surviving an infection.

That’s bad, but it represents a significant increase in the share of the public willing to get a vaccine.

“Credit needs to be given to government and health officials who have been encouraging folks to get vaccinated,” said OHPI Data Analyst Jacob Joss. “The tide has shifted dramatically since last summer when most people were hesitant about taking a vaccine.”

Arizona in recent weeks has suffered the fastest rate of spread of the virus in the country, although new cases have started to decline from the peak. As of the middle of last week, the state had documented 767,000 cases and 13,676 deaths — with about 2,200 new cases daily as well as about 200 additional deaths per day. Some 15% of the latest tests were still coming back positive.

The concerns people expressed about the pandemic in the poll went hand in hand with whether they were willing to get vaccinated.

Independents fall right in the middle between those two groups, with 61 % saying they’re “extremely” or “moderately” concerned.

However, a third of Republican voters older than 55 confessed to being “extremely” concerned.

Interestingly, rural Democrats were somewhat less concerned than their urban counter parts – with just 70% saying they were “extremely” or “moderately” worried.

The poll also found that people also remain skeptical of how Republican Gov. Doug Ducey has handled the pandemic. Ducey imposed a stay-at-home order in the spring and ordered schools to shift to distance learning. However, he lifted most restrictions sooner than most states and has resisted imposing new mandatory restrictions, dictating whether schools should resume in-person classes or issuing a mask mandate. The state’s vaccine rollout started slowly, but has now inched towards the statewide average when it comes to the share of the population vaccinated. In some national assessments, Arizona last week ranked as the “most dangerous state in the nation” when to comes to the pandemic.

About 25% said Ducey has done better than most other governors and about 43% said he’s done worse.

Surprisingly, only 38% of Republicans said Ducey has done better than governors elsewhere and just 20% of Independents and 15% of Democrats.