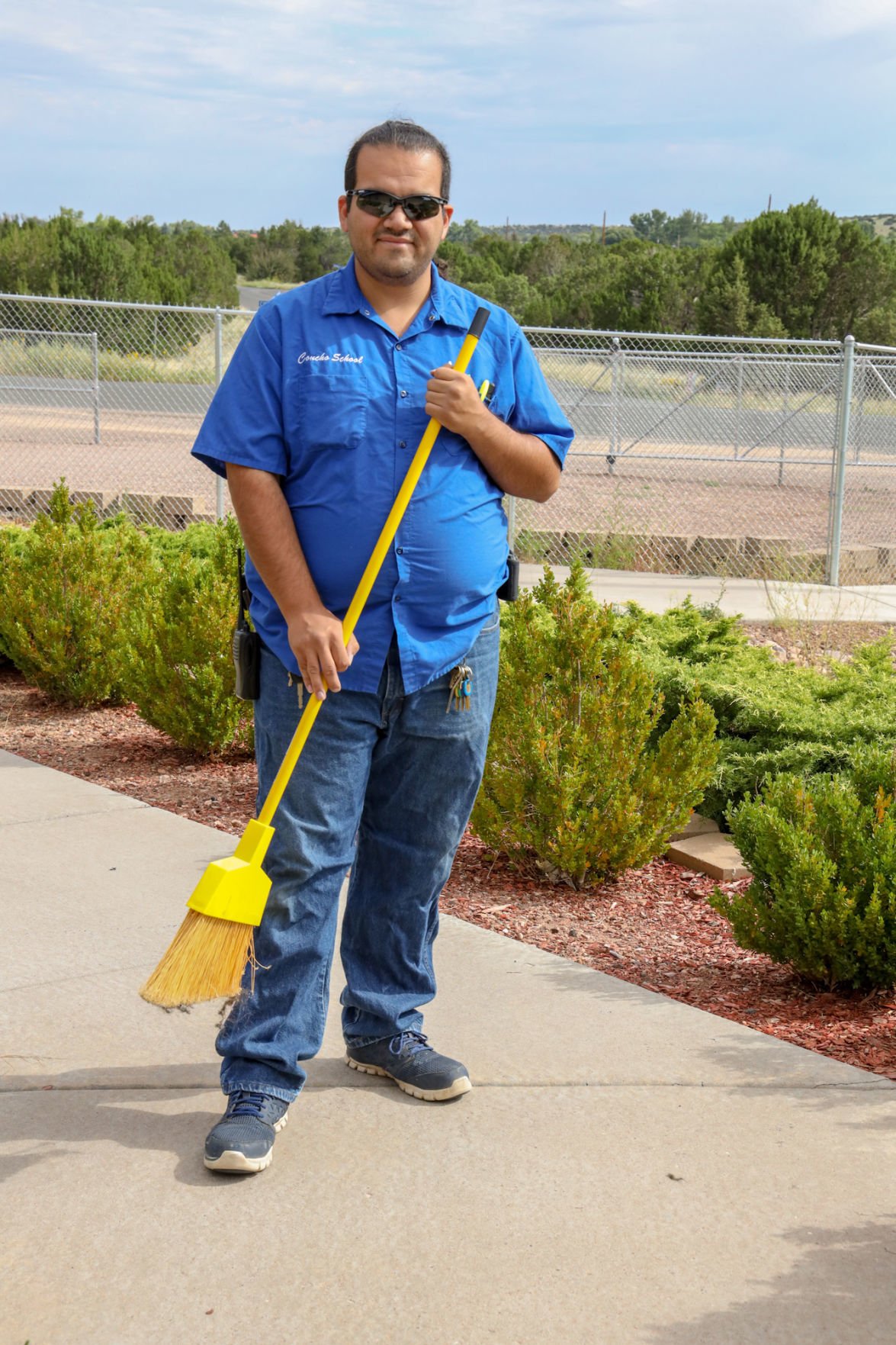 Pete works at the Concho Elementary School and has returned to school to study IT. 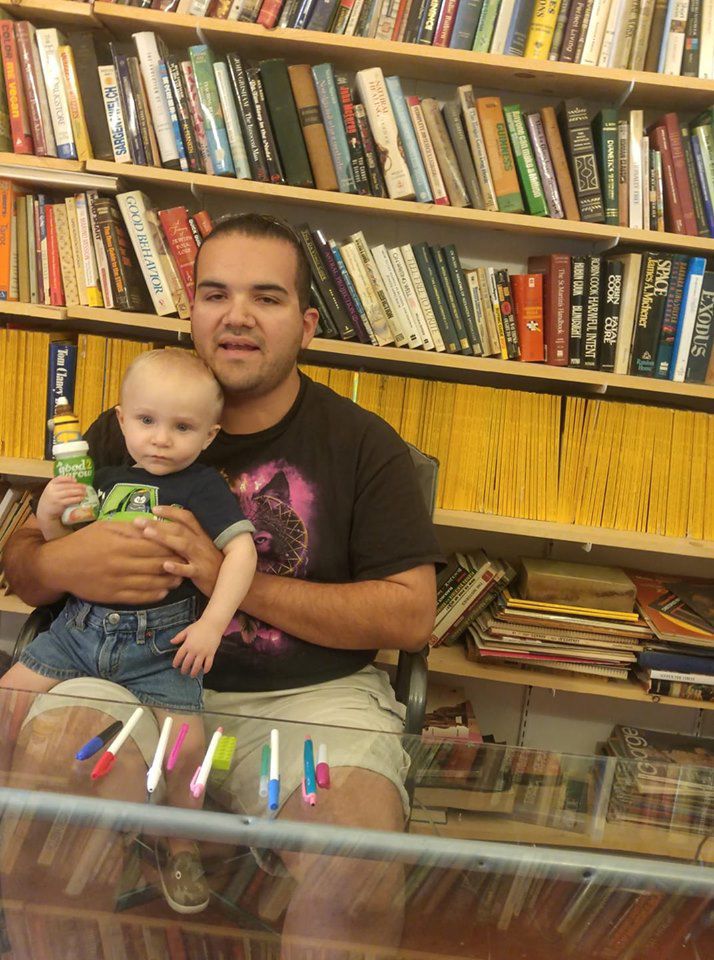 Pete Morris of Concho, with his son, Benjamin. Pete shared what it was like growing up with an amazingly fast brain, and an incredible imagination. He is on the autism spectrum. In front of him are the pens he keeps close by. There is a soothing component to using them and seeing them as characters. He loves history and fantasy stories where the story steps— “a little bit beyond,” he says. The pens, have helped him to “learn how to compensate.”

Pete works at the Concho Elementary School and has returned to school to study IT.

Pete Morris of Concho, with his son, Benjamin. Pete shared what it was like growing up with an amazingly fast brain, and an incredible imagination. He is on the autism spectrum. In front of him are the pens he keeps close by. There is a soothing component to using them and seeing them as characters. He loves history and fantasy stories where the story steps— “a little bit beyond,” he says. The pens, have helped him to “learn how to compensate.”

CONCHO — The most amazing day in Pete Morris’s life had to be when he decided he wasn’t going to allow the way his thought processes worked to keep him from enjoying his amazing imagination. Some people have to work on being a creative thinker, for him it’s always there.

His imagination had become his comfort, best friend, motivator — and when he realized that it wasn’t going anywhere, he embraced it enough to let himself, and others know that this is who he is.

Pete works at the Concho School in maintenance. He stood in the hallway answering a call go to the boy’s bathroom and check out the water on the floor.

“Be right there,” he says. He targets his goal as he looks down the hallway and places the radio into his pocket.

He is a father, husband, son, friend and a creator with the imagination that defines his essence of how he sees himself in life.

Days later, he met me at the Maxwell Media studio. He arrived on time behind the screen door and knocked softly. He held a blond-haired toddler in his arms; his son, Benjamin. They took turns holding his bottle. Pete has two other children with his wife, Tabytha. Pete has returned to school so he can work in the technological field of electronics.

Outside of work, he’s a big guy with a small baby on his lap. He’s got a soft look in his eyes when his son coos during the interview. It’s life at it’s best. Being the grown-up man with the memory of his early years at school where he was tested by the school psychologist. “It was brought to my attention that it took me a little bit longer to get things,” he said. Ironically, at the same time, “My brain was going one-hundred miles an hour.”

“I was always good at stories. I always carried pens. I didn’t tell people because I was a little bit embarrassed. I see these,” he says looking down at the different colored pens, “as having their own personalities.”

He laid out 10 pens on the table. “I imagine a female character,” as the smaller pen, and the larger one as the male in the story, once again, that he discovered as a useful tool to play out his world.

These moments of Pete’s sharing his imagination, and the way he thinks, he admits helps him to feel free.

“It keeps me anchored,” he said referring to the pens, “and I learned how to compensate.”

In his private moments, during his childhood, he played and organized episodes of being an entertainer. He would roundup his two siblings and create the scenario of a production like they would see on television. Using his imagination was the integral part to his early beginnings and to understanding how his brain worked.

Both of his hard-working parents were instrumental in his life especially with the role of supporting a family and stability, especially his father. At times the young Pete had to come to terms with his anger when he was bullied for being “different.”

At about the fourth grade, “I had odd social traits. I wasn’t much for fighting, but they picked on me for that and also because I was Hispanic and didn’t speak Spanish. I was taken out of class for reading help, (SPED), and then I was picked on. I would cry. The teachers would have to calm me down.”

“Dad was into martial arts. He taught me about breathing. And he would say, ‘Peter, who do you think won that fight?’ I said, ‘the one who’s standing?’ ‘No,’ he would say, ‘neither one of you because you both had to fight.’

“I miss him terribly,” he said

Local Concho psychologist, Loretta Beavis, provided this quote to perhaps explain the adult autism experience through the voice of a friend of hers: “One does not grow out of autism; rather the environment progresses …There is a need for intellectual stimulation that is not available through normal processes such as shoehorning me into a standard of public school. Some parents figure it out and find people who are able to provide intellectual guidance or stimulation; advanced education opportunities and a job that let me ‘do anything.’ I watched a task and I say, ‘I can do that.”

Perhaps we have become more fragmented as our learning styles vary, while the educational base stays the same. The process of a student needing an Individualized Educational Program, IEP, can hold some students back over time because their brains may gradually get caught up to the delay the educational system says they were missing at that time.

What makes us different and what makes us the same? We live on a common ground of mutual human needs.

Pete loves to quote Dr. Seuss, “Why spend so much time trying to fit in when you were born to stand out?”

Kareena Maxwell lives in Concho with her husband in a WWII styled Quonset hut. She’s a ten-time award winning author of seven books as well as the novel “The Birds of Concho.”