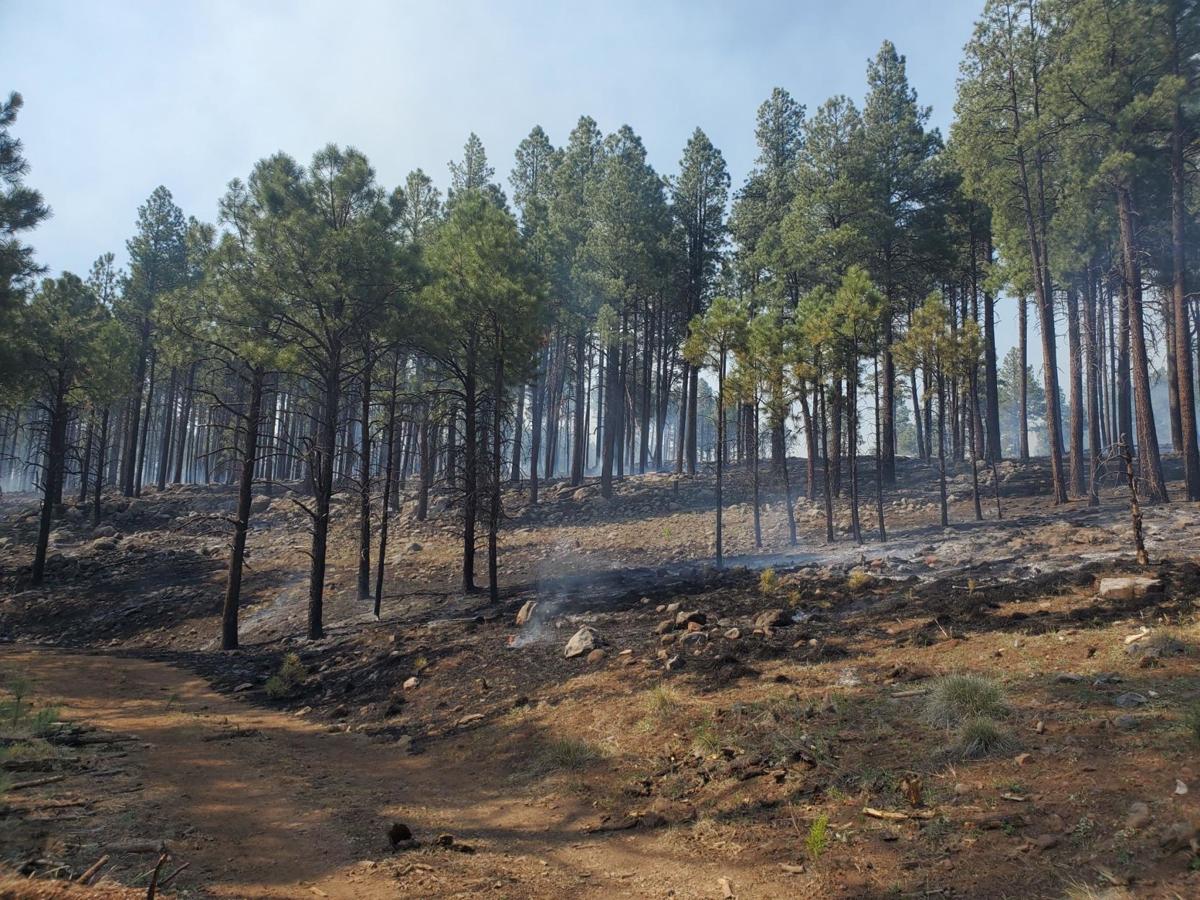 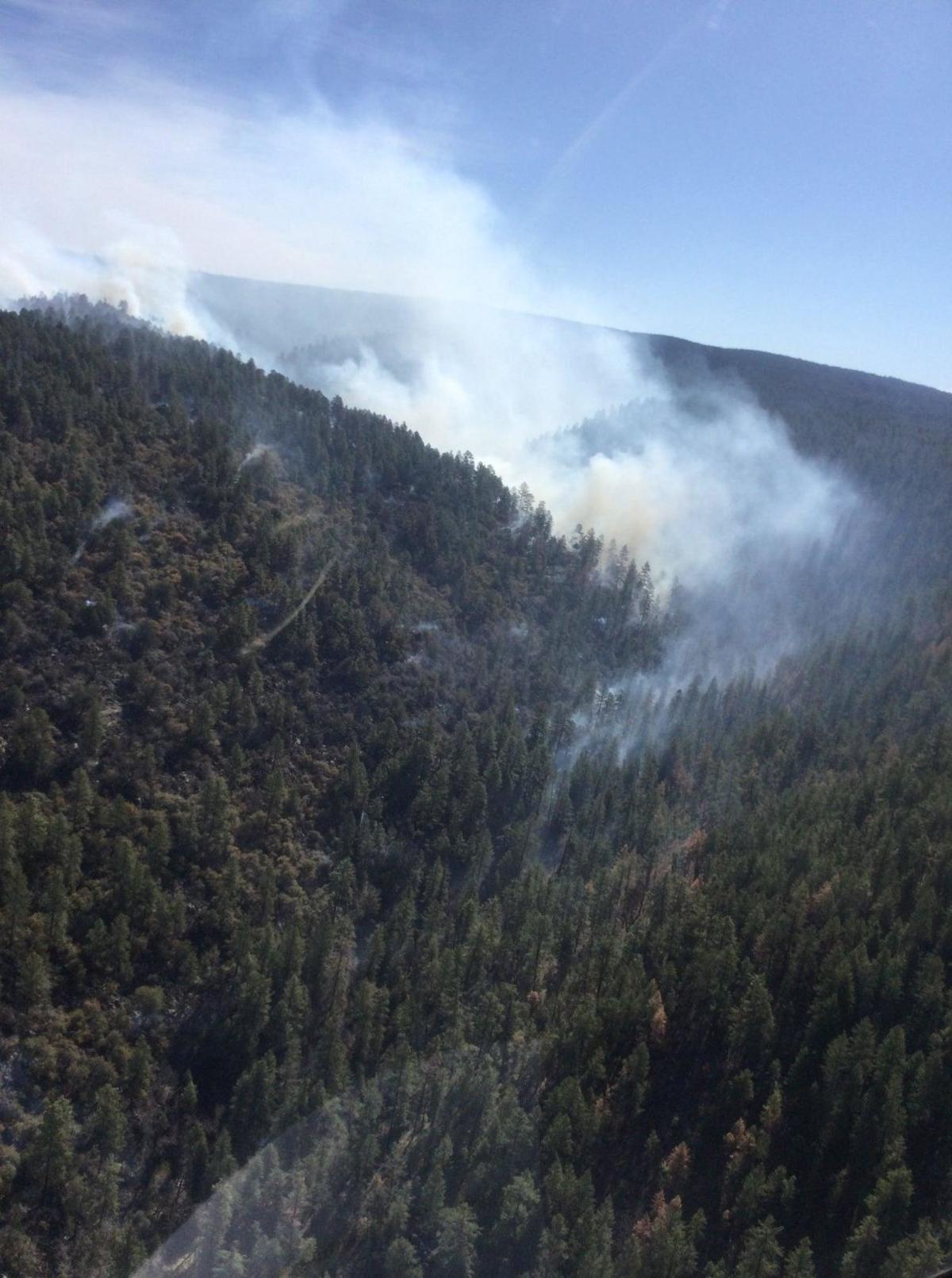 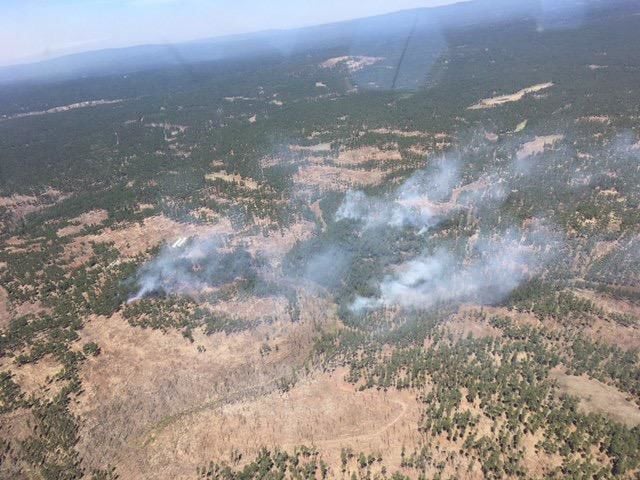 SHOW LOW — Two new White Mountains wildfires are growing rapidly, with fire crews scrambling to get a box around them to prevent their spread.

The McDonald Tank Fire south of Tonto Lake near the Black River on the Fort Apache Indian Reservation started from unknown causes on Tuesday and grew to 680 acres overnight. The fire’s moving towards the Black River, with active running, torching, flanking and backing. It’s mostly burning in timber, brush and tall grass. The 159 firefighters on Wednesday were trying to figure out how to contain its spread using backfires and firebreaks on existing road systems.

Meanwhile, the lightning storm that sparked the Boggy Creek Fire near Alpine at least had the grace to mix rain with lightning — giving fire crews some help in containing the blaze.

Nonetheless, overnight on Tuesday the fire grew from 70 acres to 540 acres and burst to cover 3,000 acres by Thursday morning. The fire’s burning in the fire scar of the Wallow Fire about 10 miles northwest of Hannigan Meadows. The 470,000-acre Wallow Fire left lots of downed and dead wood and snags, but took out many of the tree thickets that produced the extreme behavior in the largest of all state fires.

Some 50 firefighters labored to create lines around the Boggy Creek Fire to keep it from kicking up and spreading into neighboring communities as the temperature rises, the sparse moisture from the storm evaporates and the winds pick up.

The latest update said the fire had accelerated from creeping along the ground to moderate flanking and creeping through the heavy dead and downed fuel left by the Wallow Fire. “Crews were able to anchor point on the fire Monday on the southern end and will be looking for opportunities to corral the fire to the north, east, and western sides of the fire using existing road networks where they can safely engage with operations.”

Every national forest in the state remains in Stage 1 Fire Restrictions, due to the exceptionally dangerous fire conditions. This means no campfires, target shooting or other high-risk activities in the national forests.

By all indications, we’re in for six weeks of white-knuckle wildfire danger until a hopefully normal monsoon lowers the fire danger sometime in July, according to the National Weather Service’s May wildfire update..

Arizona’s in the grip of perhaps the worst drought in 1,000 years – with the possible exception of a long, dry spell in the 1100s. Almost all of Navajo and Apache Counties remain in “exceptional” drought, according to the US Drought Monitor.

The record-breaking dry spring comes on the heels of a dry winter has left the region primed for a much worse fire year than even last summer – when nearly a million acres burned. Conditions right now are more dangerous than the fire seasons that spawned the Rodeo Chedeski Fire or the Wallow Fire — the two biggest fires in recorded state history.

So far, New Mexico’s been having the worst fire season, with the 12,000-acre Johnson Fire and the 13,000-acre Doagy Fire are currently burning out of control, according to Inciweb, which tracks wildfires throughout the nation.

Arizona has already had some scary fires — including the 1,300-acre Flag fire near Kingman, the 5,500-acre Tussock Fire in the Bradshaw Mountains, the 2,800-acre Copper Canyon Fire near Phoenix, the 1,200-acre Margo Fire north of Tucson, the 70-acre Bonito Rock Fire near Alpine, the 2,000-acre G22 Fire near Heber, the 300-acre Butler Fire near Safford, the 1,000-acre, the 1,000-acre Sycamore Canyon fire near Tucson and the 1,000-acre Warsaw Fire near Nogalas.

The fire season forecast calls for high fire danger throughout the west, with the danger rising steadily into August and September in most areas. California’s looking especially vulnerable – signaling a possible repeat of last year’s fire season disaster. Last year, 4 million acres burned in California alone and the fires killed 33 people, destroyed 10,000 structures and inflicted $12 billion in damages. Fire agencies spent $2 billion fighting those fires. The drought’s so widespread now that the federal government could easily run out of firefighters.

Fortunately, forecasters still say there’s a good chance for a normal monsoon season in Arizona, which will reduce fire danger dramatically once the summer rains start in July.

In the past two months, high temperatures have averaged 2-4 degrees above normal across southern Arizona, but only 1-3 degrees below normal for the mountains of Arizona and most of New Mexico.

The “La Nina” sea-surface cooling in the Pacific has been driving the dry winter and spring conditions in recent months, but that pattern has started to weaken, said the Weather Service. The condition could return later in the summer — but for now is considered neutral in its impact on the weather.

So that means we’ll have to just sweat out one of the most dangerous fire seasons in years for the next six weeks. The Valley has already returned to triple digit temperatures, which could mean another summertime invasion by flatlanders. The Forest Service has already imposed near universal fire restrictions, but could start closing the forest if the fuels continue to dry out and the temperatures to rise.

We can also pray for well-timed storms — although they’re rare in June.

“As is typical for the Southwest,” concluded the Weather Service, “just one or two major storm systems in an otherwise dry period can have a substantial impact on fire potential, even amidst a drought, and this will be closely monitored even though it becomes less likely. Most late spring storm systems are expected to track north of the region, yielding primarily periods of strong winds with backdoor cold fronts bringing temporary relief and some likely paltry dryline associated precipitation.”

Buckle up: Could be a rough ride.

A very special thanks to Peter Aleshire and the White Mountain Independent for your outstanding and important coverage of the fragile state of our precious national and tribal forests as we enter a most precarious fire season. I think your newspaper provides the best coverage of this critical in the entire state and articles like this should be required reading for everyone who enters these beloved forests. Let's all continue praying for rain but in the meantime, respect and care for our treasured forests and all the wildlife that inhabits them so that not only we, but future generations to come be able to experience the joy of nature.