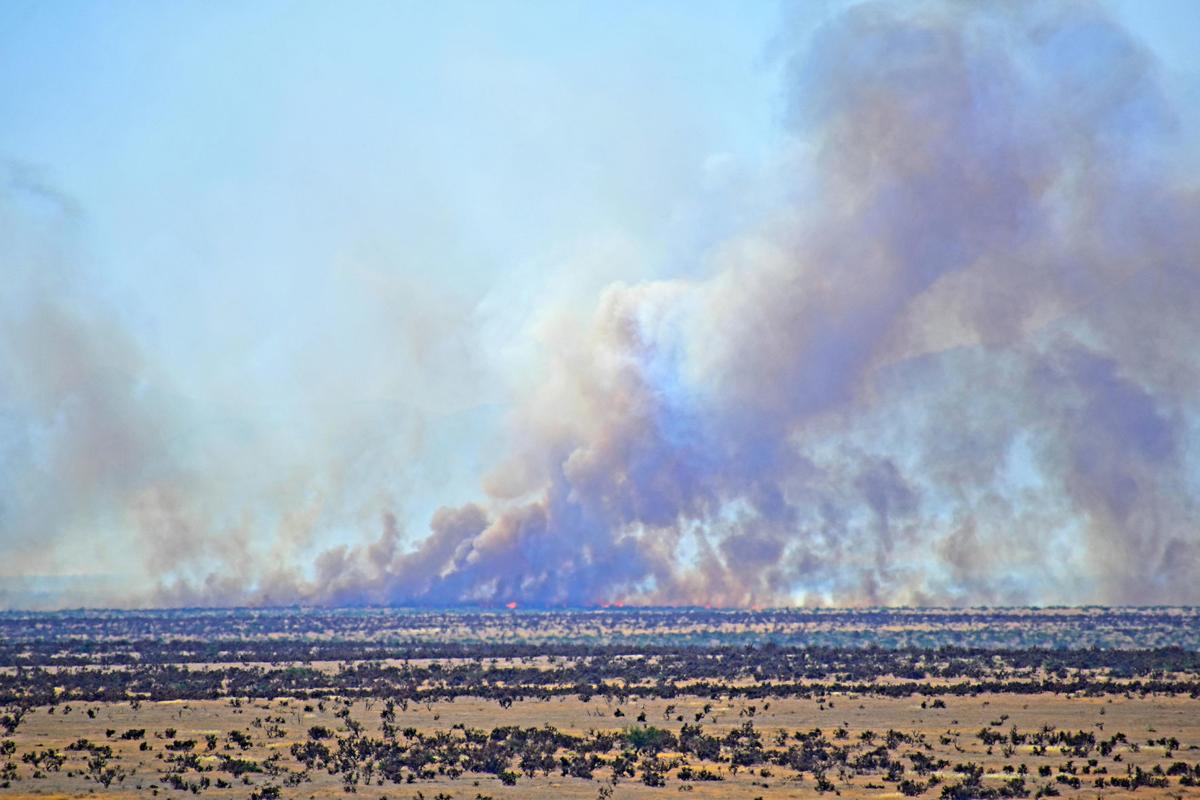 The Blue River Fire dominates the horizon on the San Carlos Apache Reservation. 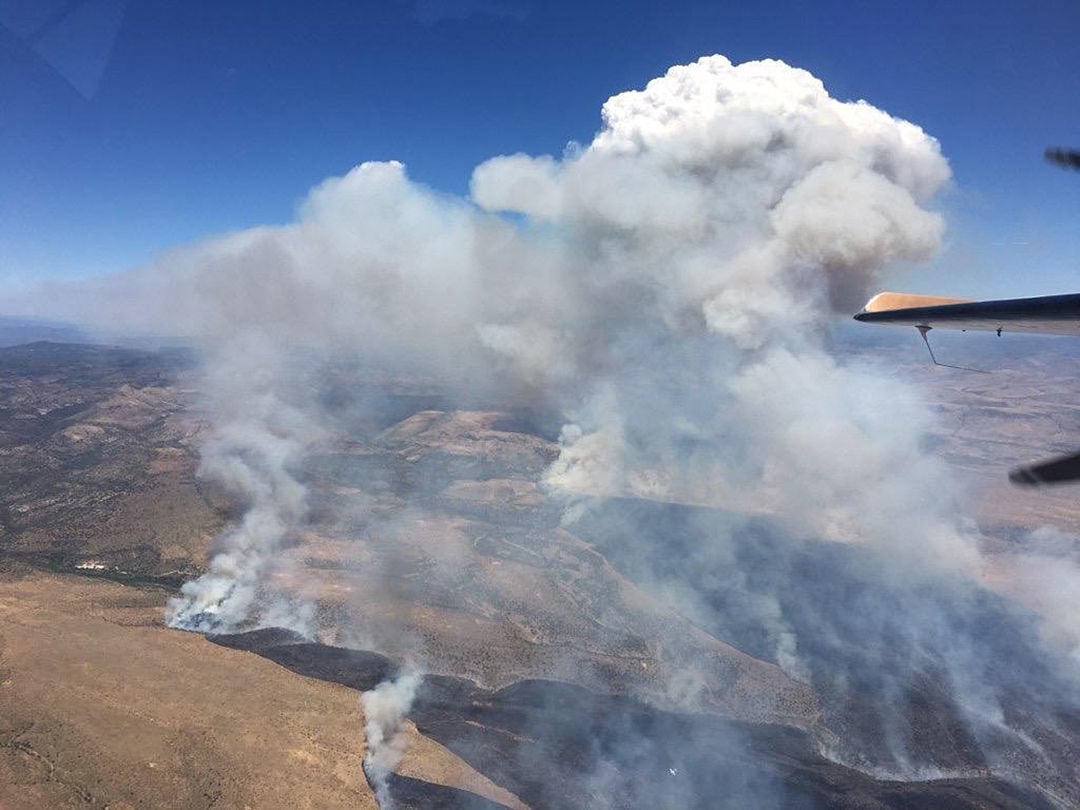 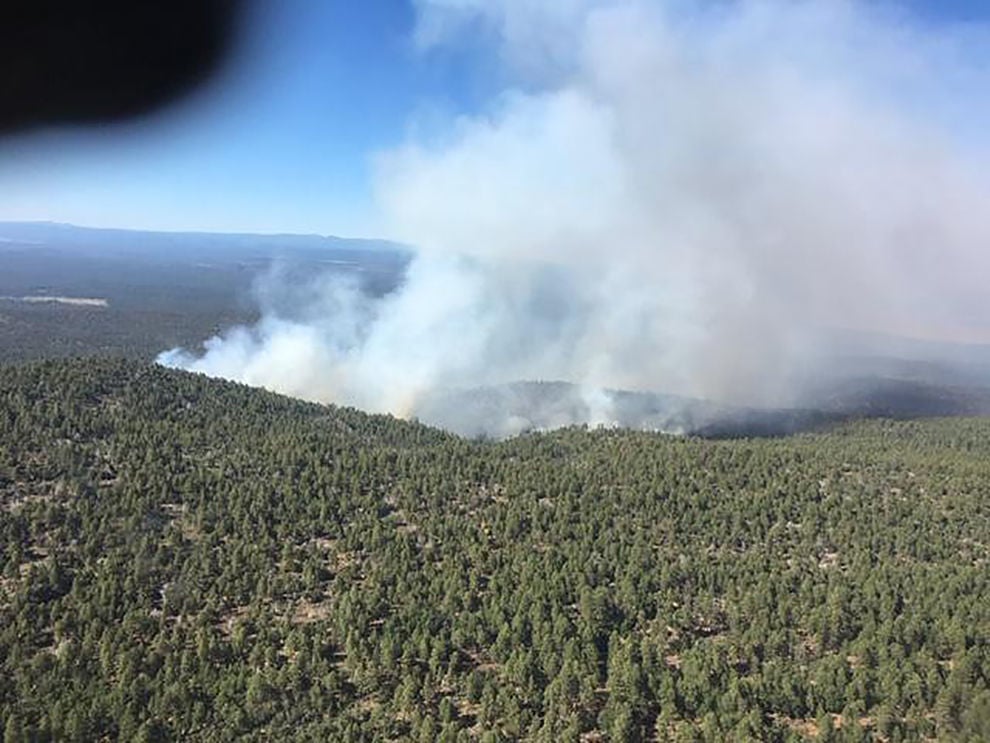 ARIZONA — Fires have broken out across the state, driven by dry lightning storms and a blustery cold front.

The most alarming fires are in and around the White Mountains.

The Blue River Fire (Ko’ Ba Nagoni I’) fire on the San Carlos Apache reservation was started by lightning on June 5 and, as of Wednesday, had grown to 30,000 acres.

More than 100 firefighters have been assigned to the swiftly growing fire about eight miles south of San Carlos. The decline in wind intensity as the week progressed allowed crews to make progress on the blaze, which currently threatens no structures.

The nearby Dry Lake Fire has burned about 3,400 acres and is being managed as part of the same incident.

Inciweb noted that “agencies throughout the Southwest have been experiencing dry and dangerous conditions with high temperatures and the concern for the COVID-19 pandemic thus creating a complex situation.”

Meanwhile, the windy cold front has also complicated efforts to control the 1,200-acre Bingham Fire on the Apache-Sitgreaves National Forests south of Alpine.

Lightning sparked the fire on June 6 and winds from an in-rushing cold front fanned the flames to 1,200 acres and pushed it to the west.

However, the cooler temperatures also moderated fire behavior, despite the big drop in humidity in the colder air.

The Forest Service sent three hotshot crews, 11 engines and three helicopters to battle the fire. The crews started by establishing fire lines and burnout operations along Highway 191, hoping to establish a line that will prevent the fire from moving further west. The state closed a 40-mile stretch of the highway for the next week between mile markers 186 and 225.

Fire commanders warned the public to expect heavy smoke throughout the area, especially at night when the smoke settles in low-lying areas. Emergency vehicles will also be using the still-open portions of the highway.

Several other fires have started across the state in what promises to become a white knuckle fire season – with hot, dry conditions and a late monsoon predicted in the next month.

The 3,300 Tortolita Fire near Tucson was 25 percent contained as of Wednesday and the nearby, 2,500-acre Bighorn Fire was only 10 percent contained. More than 200 firefighters are working to contain those two fires.

The 3,300-acre Ranger Fire near Florence has been fully contained.

The biggest fire still burning is the 25,000-acre Sawtooth Fire in the Superstition Mountains on the Tonto National Forest, which is now 81 percent contained. Some 225 firefighters continue to work the lines on that fire.

The 1,000-acre and the 1,400 East Desert Fire are both fully contained north of Cave Creek.

The US Weather Service has predicted a hot, dry fire season and a delay in the onset of the wet monsoon. The recent stormy cold front, which brought lightning strikes but little moisture, illustrates the danger of a such a delay in the wet portion of the monsoon.

The Forest Service missed a season of controlled burns and thinning projects due to COVID-19 and the concern about fire and thinning crews gathering in camps during the pandemic.

The national fire season generally starts in the Southwest, with the danger greatest in June and early July. California and the Pacific Northwest goes into peak fire season later.

Unfortunately, few Rim Country or White Mountains communities have yet adopted a Wildlands Urban Interface (WUI) building code or a Firewise brush clearing ordinance, both keys to keeping embers from an approaching wildfire from setting scores of buildings on fire all at once – overwhelming firefighters and trapping residents.

That’s what happened to Paradise California, where 85 people died before they could evacuate. One national survey concluded Payson, Pine, Show Low, Heber, Pinetop, Alpine and Springerville all face a higher fire danger than did Paradise before it burned to the ground.

Peter Aleshire covers county government and other topics for the Independent. He is the former editor of the Payson Roundup. Reach him at paleshire@payson.com.