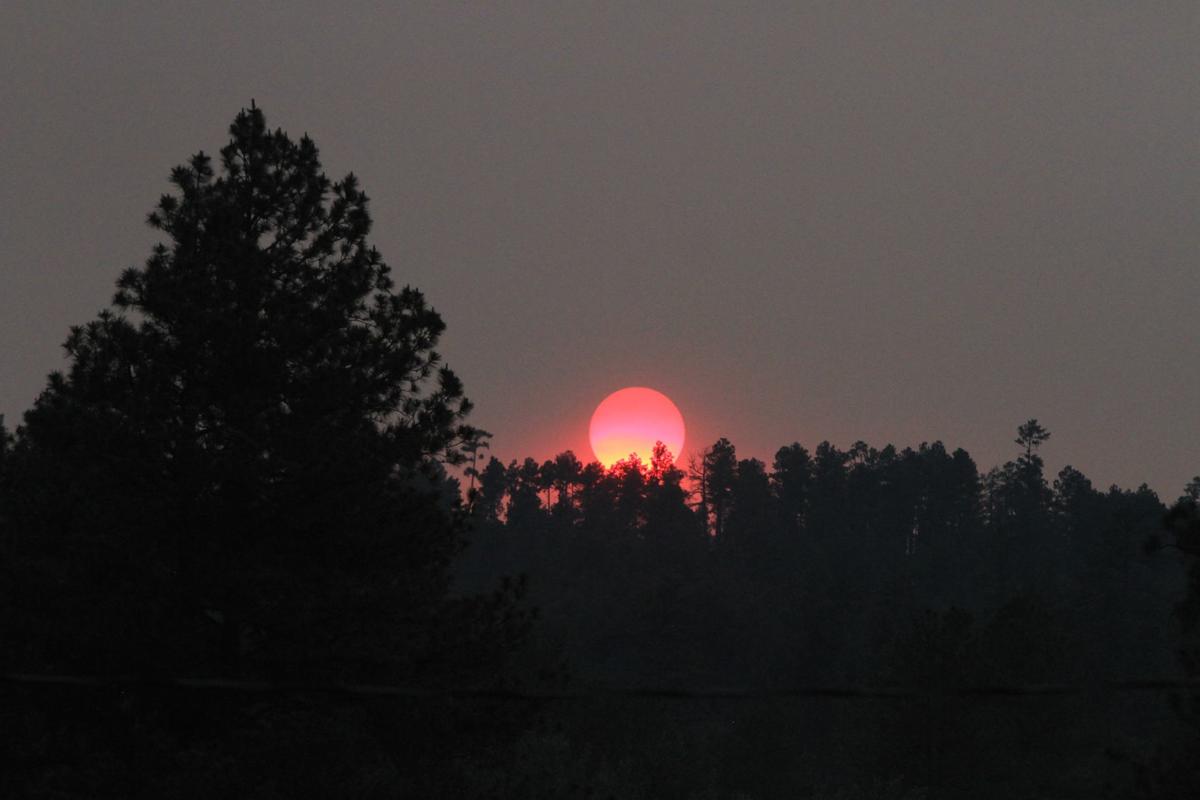 The sun setting June 16 from distant fires gives an ominous effect in the night sky. See the “El Nino effect may turn violent,” Page A4. 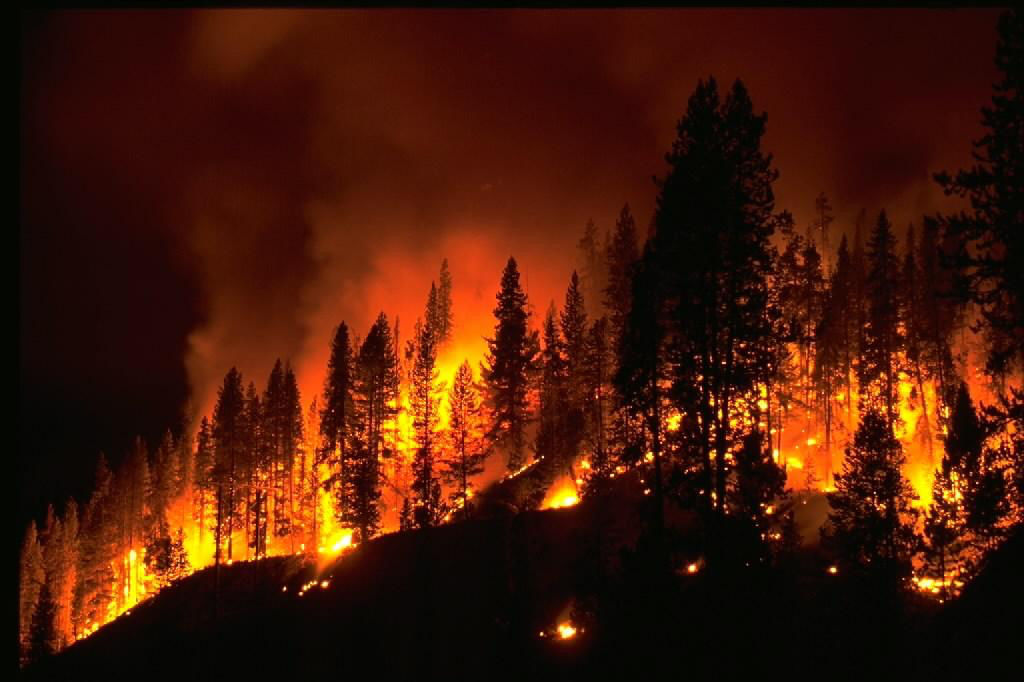 Even though it was a wet winter, the area could still see wildfires this summer. 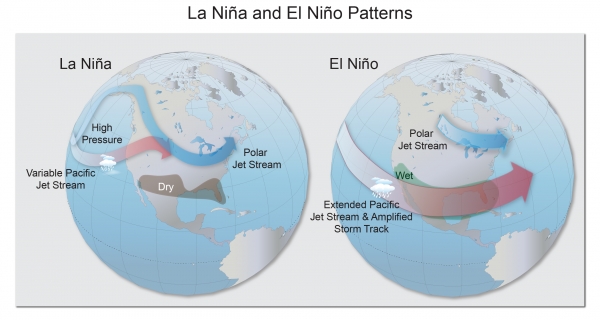 The sun setting June 16 from distant fires gives an ominous effect in the night sky. See the “El Nino effect may turn violent,” Page A4.

Even though it was a wet winter, the area could still see wildfires this summer.

But watch out: El Niño taketh away as well.

Rim Country and the White Mountains are soaking in the bounty of El Niño this year, which is a 1- to 3-degree warming of surface waters in the Eastern Pacific. The evaporation of the warm water from the ocean’s surface affects the intensity and direction of the jet stream — a high-altitude river of air that steers storms all across the globe.

This winter, Arizona got normal to above normal snowfall. Moreover, the Weather Service predicts a wet June and a wet monsoon, continuing on into the fall.

Compare that to last year’s La Niña conditions — with cooler than normal water welling up to the surface of the eastern Pacific. La Niña brings drier-than-normal conditions to the Southwest.

But before you break out the bubbly and decide we don’t need to worry about wildfires — best read the fine print of the forecast.

Rising global temperatures will result in more extreme shifts due to the El Niño-La Niña pattern, according to a study by the National Science Foundation published in Geophysical Research Letters.

The researchers ran a host of climate models based on the assumption average global temperatures will continue to slowly rise. Most of those models predicted La Niña will produce ever more severe droughts and wildfire years while El Niño will cause even more rainfall, snowfall and flooding.

The net effect will result in more catastrophic wildfire years, alternating with floods in the off years.

National Center for Atmospheric Research scientist John Fasullo in an online summary of the research said “the cycling between El Niño and La Niña is responsible for some of the weather whiplash we get from year to year, particularly in the western U.S. What we find when we look at model simulations of the future is that the whiplash is likely to get more severe.”

The models suggested a roughly 30 percent increase on both extremes, compared to historical patterns.

Studies have documented the sweeping impact of El Niño events on the jet stream and global climate, producing hot, dry conditions in the southern portions of North America, plus South America and Australia.

“We can’t say from this study whether more or fewer El Niños will form in the future, or whether the El Niños that do form will be stronger or weaker,” Fasullo said. “But we can say that an El Niño that forms in the future is likely to have more influence over our weather than if the same El Niño formed today.”

Unfortunately, the threat of more extreme fluctuation comes at exactly the wrong time for the forested Southwest, just as a century of fire suppression, logging and grazing has produced a tenfold increase in tree densities.

All of that greatly increases the odds a bad wildfire year will get completely out of hand, like the 2018 fire season.

A catastrophic fire year stems from a combination of three factors — dry, plentiful fuel, bone-dry conditions and lots of sparks. These days the West always has far too much fuel and far too many sparks — mostly from humans. So all it takes is a hot dry year to trigger disaster, concluded a study by University of Colorado Boulder researchers published in the journal FIRE.

The wet winter of 2017 actually set the stage for disaster, spawning the growth of many “fine fuels” like grass. This year’s wet winter could set up the same scenario.

However, the spring and summer gave way to La Nina conditions. The grass and all the other fuels dried out rapidly, concluded the researchers.

Human beings quickly provided the spark for disaster. Some 90 percent of the 71,000 recorded wildfires stemmed from some action by human beings, including millions of people building campfires in the tinder-dry forests.

The climate models predict both more wet, grass-growing winters and more extremely dry summers – the perfect recipe for a repeat of the disastrous 2017, the researchers concluded.

All of that dovetails with the results of a third study, this one by University of Riverside Earth Sciences professor Robert Allen, published in the journal of Climate and Atmospheric Science.

He looked at 40 different climate models that predict that a more violent El Niño could shift the jet stream to change rainfall patterns in California – and presumably Arizona.

Currently, California gets 90 percent of its snow and rain in December, January and February. Rising sea surface temperatures in the tropical Pacific Ocean could further magnify the storms of winter in California, producing more extreme flooding.

Don’t let a wet winter and a mild spring convince you the region doesn’t need thinning projects, Firewise brush clearing and wildland-urban interface building codes to protect against the possibility of catastrophe.