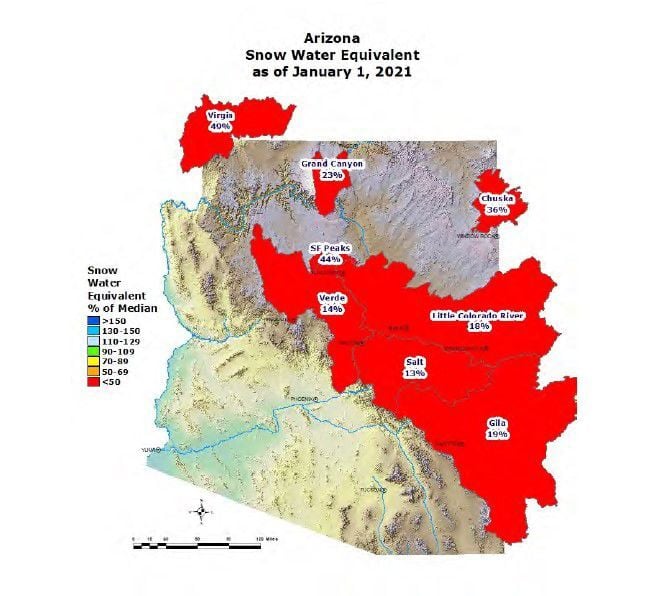 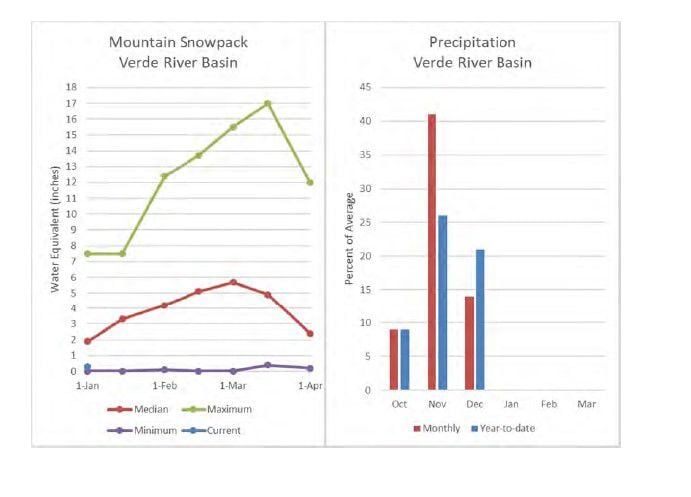 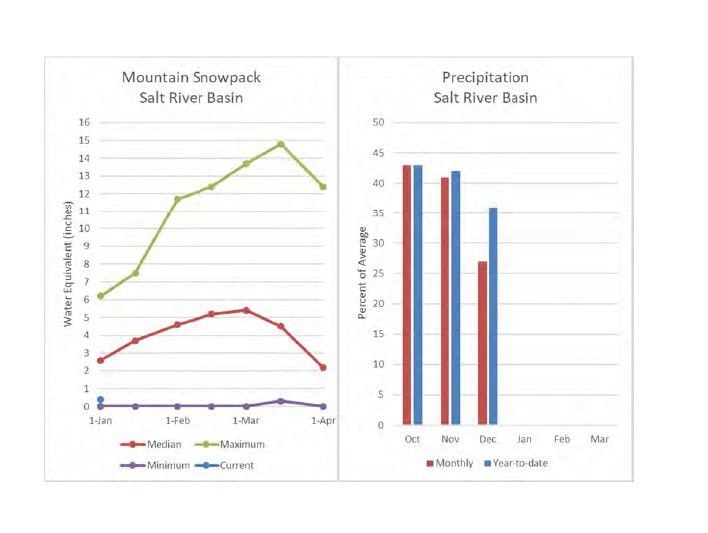 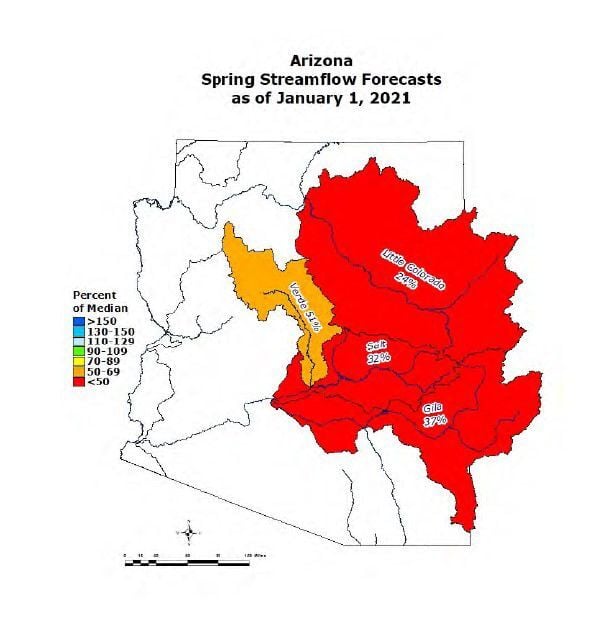 Despite a welcome dusting of snow this week, Arizona’s heading into an epically dry winter and a terrifying spring fire season.

The watersheds of the Salt, Gila and Verde Rivers in January had between 13% and 44% of the normal snowpack, according to the U.S. Department of Agriculture’s Jan. 1, 2021 Arizona Basin Outlook Report. The normally snowy Mogollon Rim country had just 5% of its normal snowpack.

Overall, Arizona’s high country has just 27% of the normal snow pack (snow-water equivalent), according to the snow pack report.

That includes 18% in the Little Colorado River Basin fed by the White Mountains, 14% on the Verde River, 13% on the Salt River watershed and 19% on the Gila River watershed.

The situation contrasts with last year, when most of those same watersheds had perhaps 150% of the normal snowpack in January, before the winter storms dried up, the spring came in bone dry and the monsoon all but failed.

This year, the only mountain range with even close to a normal snowpack was Mt Humphrey’s, overlooking Flagstaff, with 44% of its long-term average.

Ironically, the Chuska Mountains had 36% of its normal snowpack — much better than the White Mountains or Rim Country — even though the Navajo Reservation has been afflicted by extreme drought for several years.

The whole region remains in the grip of extreme or exceptional drought, with virtually every reservoir well below normal — especially on the Colorado River.

“Once again, many state drought teams noted that in areas where rain and snow fell, it wasn’t enough to increase moisture availability,” said the forecast. “In areas where it didn’t, such as the Southwest, the conditions either didn’t yet warrant additional degradations or, because they were already in exceptional drought, could not be degraded further. Snowpack and snow-water equivalent are well below normal and soils are dry. Ranchers have noted that natural forage is insufficient or depleted.”

On average, the forecasts predict stream flows this spring will reach only about 24% of normal. That ranges from 51% of normal on the Verde River to 24% of normal in the Little Colorado River watershed. The Salt River forecast falls in between at 32% of normal.

The forecast looks especially grim for the normally productive watershed of the Blue Ridge Reservoir, which forecasters predict will get just 18% of its normal runoff. The Salt River project emptied the reservoir this fall to provide drinking water for Payson and the Valley. The near-failure of the spring runoff may leave the reservoir mostly empty in the spring, preventing SRP from firing up the pumps, nearly drying up the East Verde River and perhaps forcing Payson to skip a year of its 3,000 acre-foot allotment from the reservoir.

Climate experts say the whole planet set a heat record in 2020, thanks to the steady buildup of heat-trapping greenhouse gases like carbon dioxide and methane in the atmosphere. Measurements show that 2020 edged out 2016 as the hottest year on record, despite a 10% decline in carbon emissions in the U.S. due to the pandemic.

The 2020 measurements make the past seven years the hottest stretch since the start of modern record-keeping 150 years ago, according to the National Oceanic Atmospheric Administration.

The planet has warmed an average of about 2 degrees since the late 1800s, when industrialization started pumping more carbon into the atmosphere. Since 1980, the pace of warming has accelerated – rising about a third of a degree per decade. The levels of carbon dioxide in the atmosphere have risen 50% since the start of the industrial revolution, when carbon dioxide measured 278 parts per million. This spring, projections suggest the level will exceed 417 million, before springtime plant growth in the northern hemisphere reduces levels for the summer.

It took 200 years to produce the first 25% increase in carbon dioxide, but only 30 years to boost levels another 25%.

The rise in average temperatures has pumped more energy into the atmosphere, triggering a cascade of changes according to climate scientists — including things like an increase in drought, heat waves, storms and extreme weather.

One study published in the peer-reviewed journal Science concluded that global warming has been turning moderate droughts into extreme droughts in North America, with the past 20 years marked by an intermittent drought and a doubling of acres burned.

The extremely dry winter and predicted warm dry spring in the Southwest has been linked to the “La Nina” sea surface cooling in the Eastern Pacific, normally associated with dry winters in Arizona.

The federal National Interagency Fire Center predicts another dangerous fire season throughout the West — including Arizona — due to the drought, record high temperatures and far below normal snow pack. The forecast calls for significant wildland fire potential.

The forecast states, “Over the past two months the dry trend has continued across the Southwest, while temperatures have moderated and become more variable. Temperatures have ranged from a few degrees above average across the western half of the area to a few degrees below average across the eastern portions of the area. Precipitation was generally 50-70% of average or less except for notable areas of above average precipitation largely the result of a single storm in mid-December.

“A moderate La Niña continues, and this usually results in normal to above normal temperatures and drier than normal conditions through winter for the Southwest. Long range outlooks are persisting La Niña into the spring, and temperature and precipitation outlooks are likewise extending the forecast for overwinter warm and dry conditions into March and April.”

This is NOT good, people! We MUST begin a massive tree-thinning program to thin out pine and juniper trees! In dry years, they are just torches waiting to burn. We can dispose of these trees and the slash by taking the biomass to the coal-burning plants and using that for fuel! But we must act NOW!

What really needs to happen is to CLOSE THE FOREST NOW...barricade the roads and stop any one form entering. That will reduce the flat lander valley people from leaving lit camp fires at the end of the camping trip. That will reduce the risk as most of the forest fires are HUMAN CAUSED. Now trying to convince the Forest Service of this is like a dog barking at the moon.

Close the forest problem solved. Now only have to be concerned about lighting strikes.

Now that the U.S. is rejoining the Paris Climate Agreement and we have actual adults following actual science to enact meaningful policies, maybe we can make some progress toward ameliorating the causes and effects of human-caused climate change.

Paris climate Climate Agreement thingy is a joke. Another waste of our tax dollars to support the pollution in other countries around the world as we get choked out. Just a dumb move. Yep maybe someone can come up with a reason that the idiot ignorant flat lander campers cause and effects of human-caused climate change when leaving fires burning when they leave our back yard forest.

Close the Forest now as it will help with human caused climate change.

I don't disagree with closing the forest but keep in mind locals started the Wallow Fire (538k acres) and Rodeo Fire. I read somewhere that when the pioneers arrived the forest was like a park with large trees far apart and most of the area around Snowflake was grassland...seasonal fires kept the junipers at bay. Humans are great at screwing up the earth.

Closing the forests is a must-do. But as another poster said, it's like baying at the moon to try and get anyone to listen...

Somethings to keep in mind. The 6 previous commentors are far from forest management experts. The forest was closed prior to the Rodeo Chediski fire. Chances of having a R/C or Wallow type fire in December, January, February, March are zero. Also if you close the forest then all that thinning and fuel reduction work that is occurring now will be stopped. That work needs to be done before May, June and July when the chances of catostrophic fires are likely.