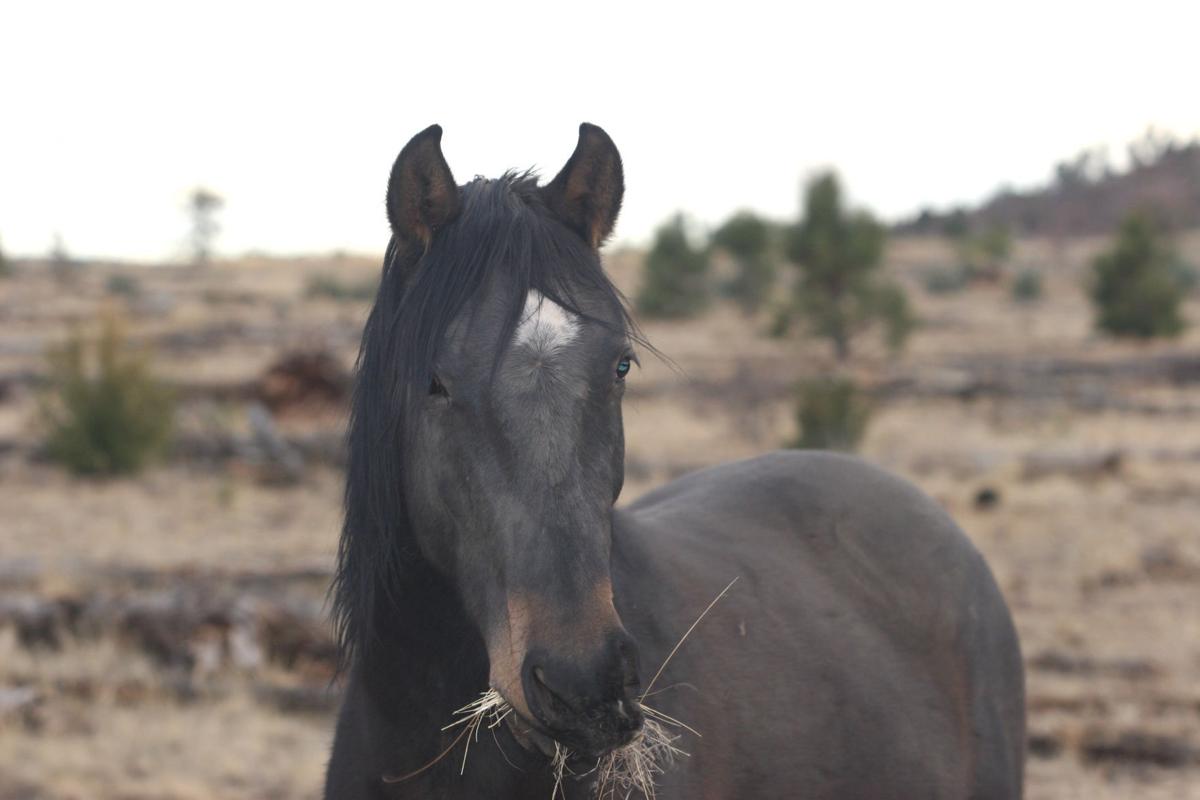 A Heber Wild Horse grazing in the Apache-Sitgreaves National Forests on the Black Mesa Ranger District. 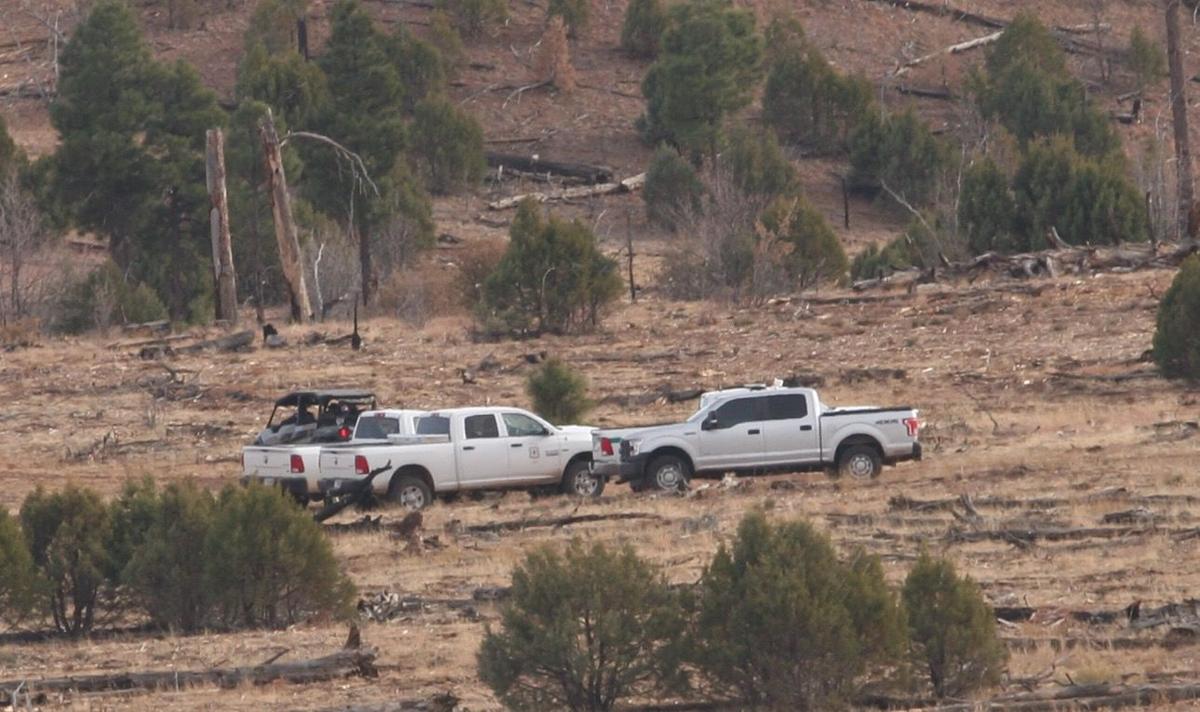 Members of the Law Enforcement Investigation (LEI) Division of the Forest Service investigate the Jan. 7 shooting of several Heber Wild Horses. The USFS asks that the public not approach the site or the vehicles, as the investigation could be disrupted and evidence could be compromised by people walking and driving through the site. 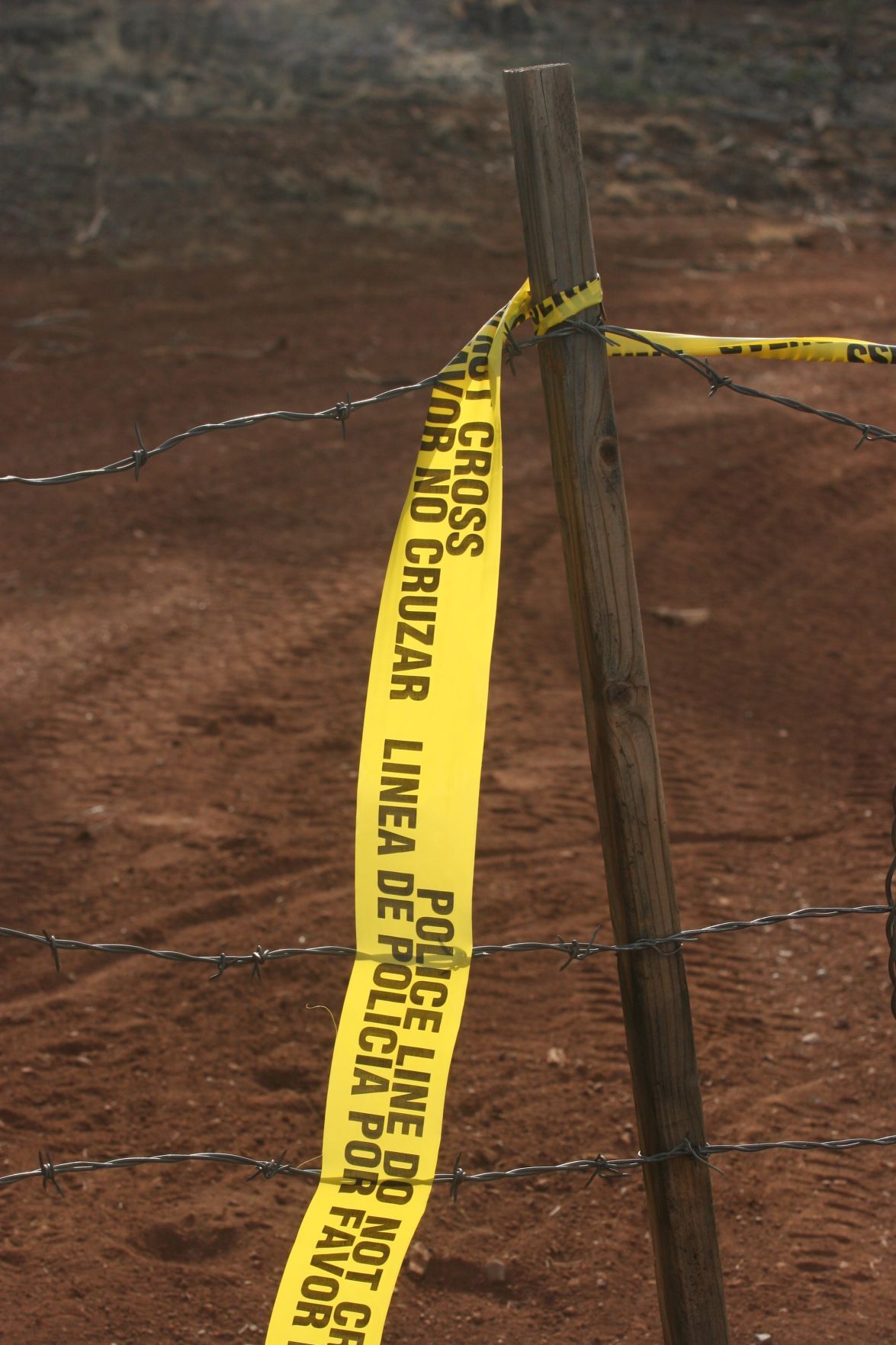 Crime scene tape marks the entrance to the site of recent shootings of Heber Wild Horses in the Apache-Sitgreaves National Forests on the Black Mesa Ranger District.

HEBER/OVERGAARD — A Facebook post began circulating Thursday night, Jan. 7, alleging that a Heber Wild Horse foal and possibly three to four adult horses were shot in the Black Mesa Ranger Districts of the Apache-Sitgreaves National Forests. This is the area east of Overgaard, where 24 Heber Wild Horses were shot and killed or died of their injuries in between October 2018 and spring 2020.

The most recent incident was reported to the authorities by someone in the forest on Thursday, Jan. 7. Members of the local group that refer to themselves as “Friends of the Heber Wild Horses” arrived in the area after the report and spoke with the Independent over the weekend.

Heber Wild Horses Freedom Preservation Alliance, a non-profit organization separate from Friends of the Heber Wild Horses, posted a picture of a foal that was shot and had to be euthanized on site.

“I can say we saw three dead horses,” said Friends of the Heber Wild Horses member, Betty Dixon. “We are confident that there are more dead horses based on the area the Forest Service is investigating and the shootings appear to be consistent with what happened last year.”

“I’m an individual that just cares about and appreciates the horses,” said Dixon. “We are an advocate for the horses; we watch the horses from afar and don’t engage in politics or drama.”

Both groups are considered equine advocates and have spent hours upon hours in grassroots efforts to observe and report everything they see in the forest to the authorities — specifically if it involves the Heber Wild Horses.

Both groups are disturbed about the recent shootings and fear this won’t be the last brutal crime committed against the Heber Wild Horses.

“The foal is one of the horses found shot today … She was shot during the night or early morning and left to suffer,” read the The Heber Wild Horses Freedom Preservation Alliance Facebook post on Thursday.

The Law Enforcement Investigative (LEI) division of the U.S. Forest Service (USFS) arrived on scene to investigate and the advocacy groups said they turned over all evidence they had gathered by observation or by game camera(s).

Both groups also said via Facebook posts or interviews with the Independent that the foal was euthanized by an LEI officer.

“The foal was alive and crippled, unable to stand and scared without her herd,” said Dixon. “She had to have been hungry, thirsty and seemed to have been thrashing on the ground for hours with her front legs. She couldn’t move her back legs but you could see in the dirt where he neck and head and front legs moved up and down.”

Dixon witnessed one of the other adult horses that was killed and said the predators and scavengers had already started consumption of the body.

As of Sunday, Jan. 10, it is believed that there could be up to five Heber Wild Horses shot but that information has not been confirmed by the authorities.

The resurgence of the horse shootings has angered, saddened and frustrated some members of the public. The situation seems tragic and without end.

Although the USFS is in the final stages of the Heber Wild Horse Management Plan, the public has pleaded for the authorities to identify and prosecute the shooter because it’s conceivable that these crimes will continue with, or without, a plan.

“Over the past 3 years we have offered countless leads which included photos of said horses to Forest Service in reference to not only the shootings, but of the horses that were taken out of the forest and sold at the Payson Rodeo grounds,” said Hauser.

So my questions are, while they are quick to spend a year trying to come up with a management plan at the cost of taxpayers’ money, why over the course of 3 years of someone shooting these horses with many leads and rewards offered by the public has nothing been done, or at the eery least updates to the taxpayers they work for?” said Hauser.

“It is absolutely devastating that after more than two years, a very dangerous individual is still on the loose and continues stalking and killing federally protected wild horses and endangering human visitors to the Forest,” said Payson resident Kathy Reidhead.

The exact number of horses and manner or cause of death had not been confirmed by the Forest Service as of Friday, Jan. 8. The initial reports were made on Thursday and the Facebook post appeared after business hours on Thursday night.

The Independent contacted USFS authorities for more information on Thursday and received a reply early Friday morning. The Forest Service stated that they were aware of the incident and were investigating.

“... we are in the critical first hours and do not want to jeopardize the investigation,” stated Forest Supervisor Anthony Madrid in the initial statement. “We take these incidents seriously and appreciate the public’s cooperation while law enforcement does their work.”

The crimes are still being investigated by the Law Enforcement (LEI) division of the USFS. This is a separate arm of the U.S. Forest Service typically is not permitted to comment regarding their investigations.

This perceived lack of transparency gives them a bad rap. Press releases and comments must be approved through many levels and can only be issued by the Forest Supervisor’s office via public information officers.

To maintain the integrity of complex investigations, information gathered by the LEI is not always shared with other branches of the USFS.

Heber Wild Horses are federally protected under the Wild Free-Roaming Horses and Burros Act of 1971. Although a management plan for the free-roaming horses has been in process for more than 10 years, it wasn’t until 2019 that an actual draft was issued by the Forest Service.

The horse shootings have been a catalyst for kickstarting the management plan draft.

Public comment periods have occurred and the National Environmental Protection Agency (NEPA) study has been in progress. The anticipated date of completion is sometime this year.

“I am sickened by this report today of more horses fatally shot from our Heber Wild Horse herd,” said Heber/Overgaard resident and White Mountain Independent contributor, Sherry Adair. “To intentionally take the life of one of God’s most beautiful creatures, the horse, is a hideous crime.”

“It appears there is a pattern forming here with these repeated incidents of shootings every winter now,” said Adair.

“Who shoots these animals?” asked Dixon who witnessed a Heber Wild Horse suffer after being shot. “It’s destructive, hurtful and savage and it doesn’t accomplish anything.”

A reward of $5,000 is still being been offered for information leading to the arrest and conviction of the person or persons shooting the animals.

If you have information, contact If the public has a tip or encounters an injured or deceased horse, please contact the Tipline Navajo County Sheriff’s Office at 1-800-78CRIME. In the event of an emergency, call 911 first.

You would think with all the game cams in the forest this would be an easy resolution.

What a pathetic lie that the Forest Service doesn't know who the killers are..They have cell phone evidence of filmed killing sprees from the phone of the poacher the AZFG arrested last year. Let's stop the charade this is hideous!

Just saying is spouting false statements. There is no proof of what she is saying. These are not easy cases to make. They'll catch a break and apprehend the shooters. These folks are working hard with limited resources.