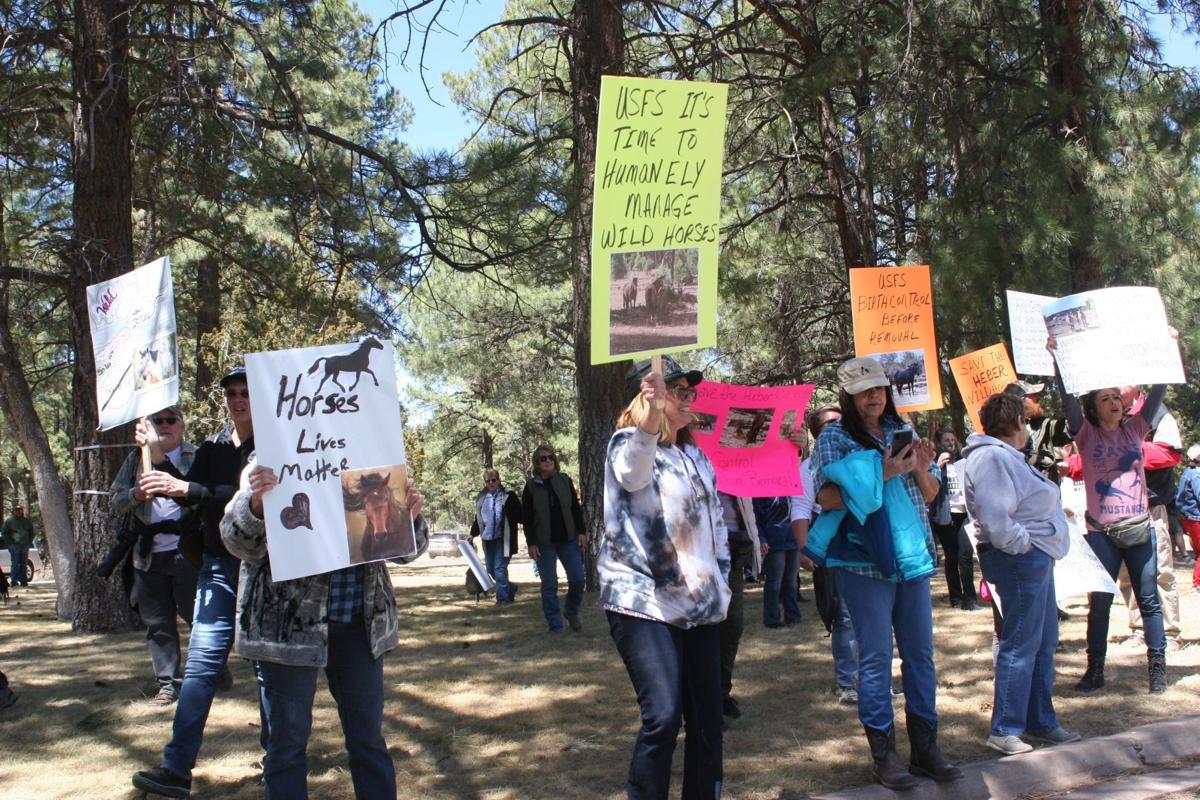 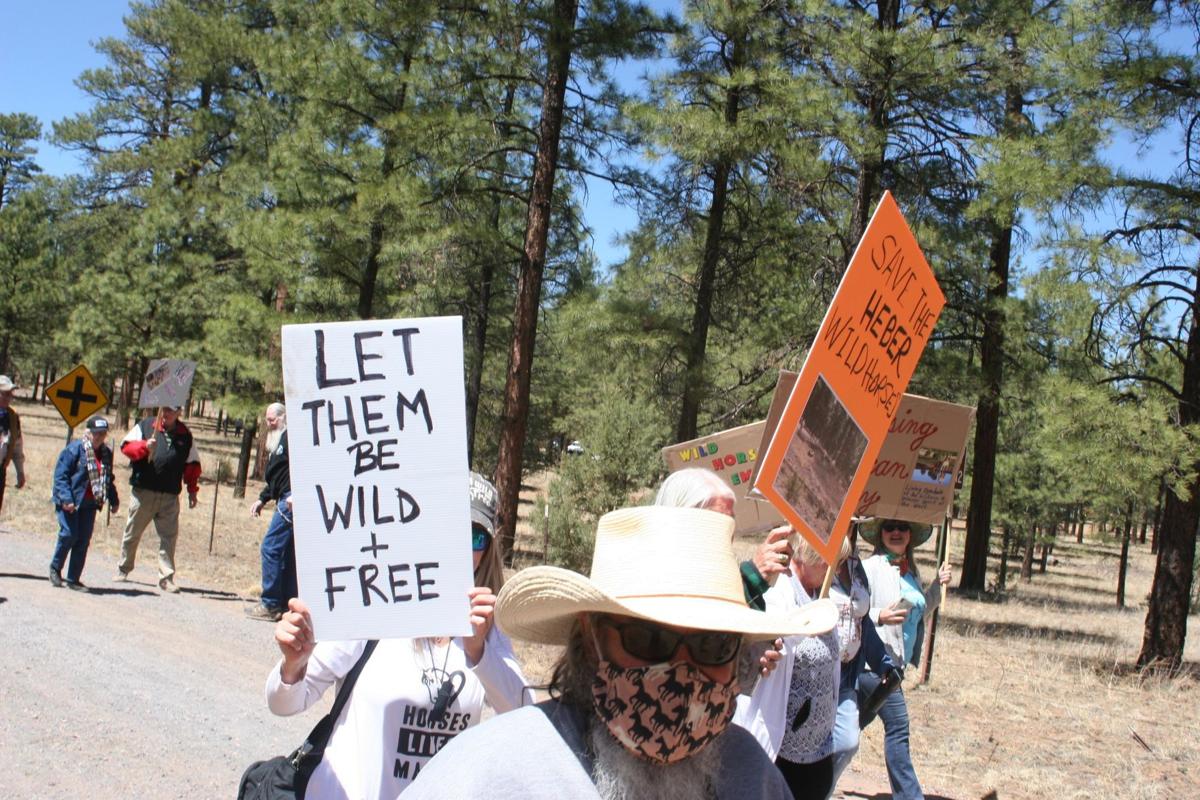 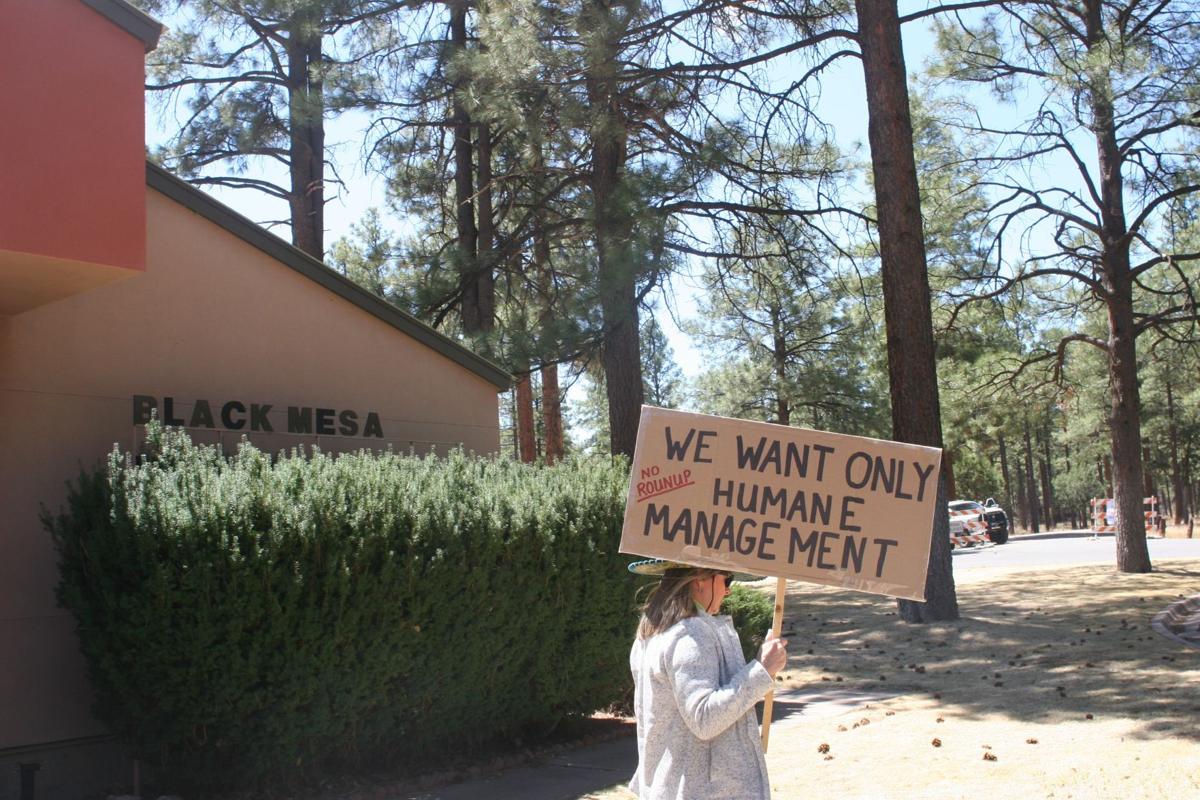 A protestor holds a sign that reads, “We want only humane management” in reference to the Heber Wild Horses living on the Apache-Sitgreaves National Forests. Protestors consider the suggested herd number of 50 to 104 “inhumane.” 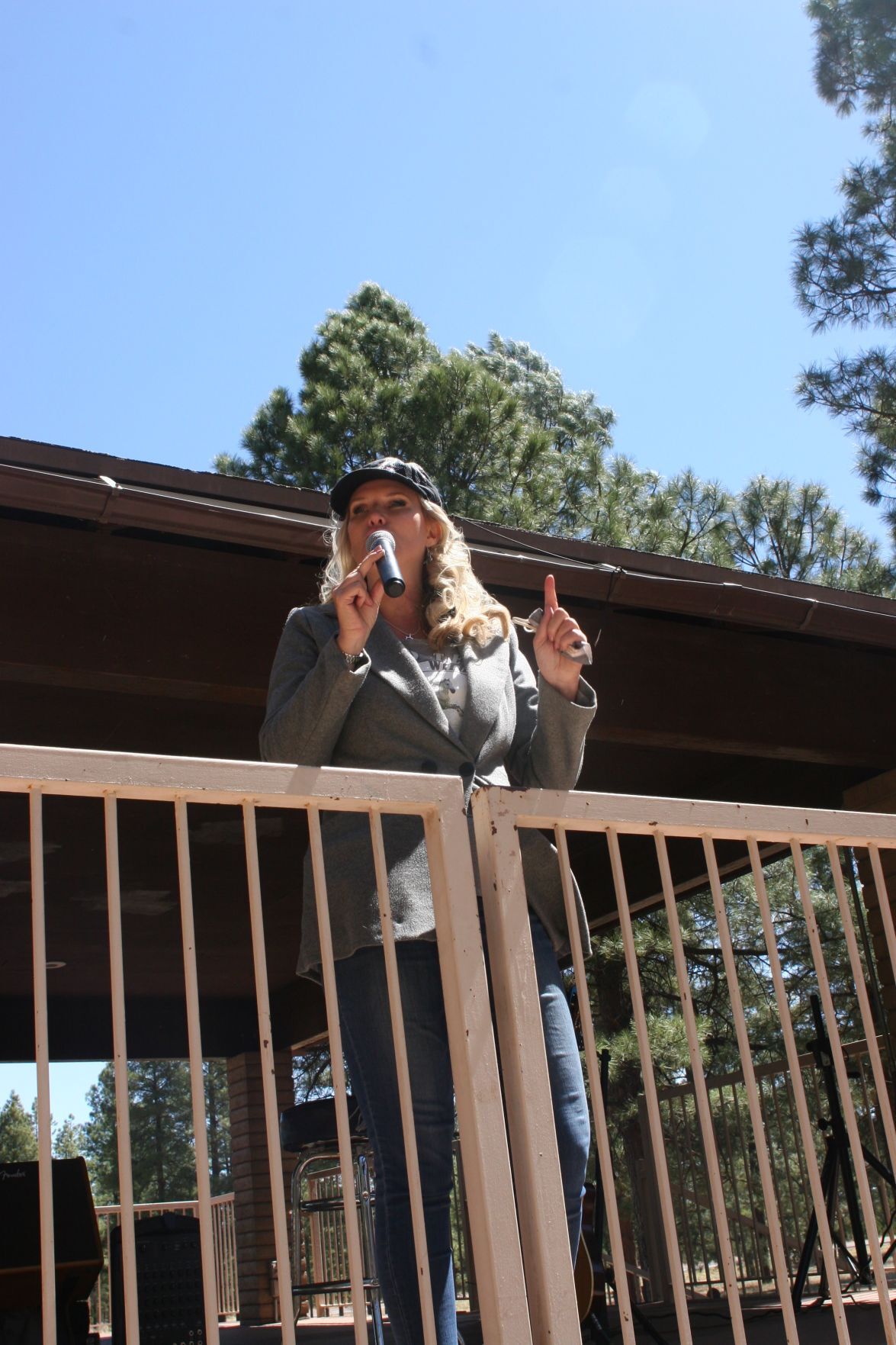 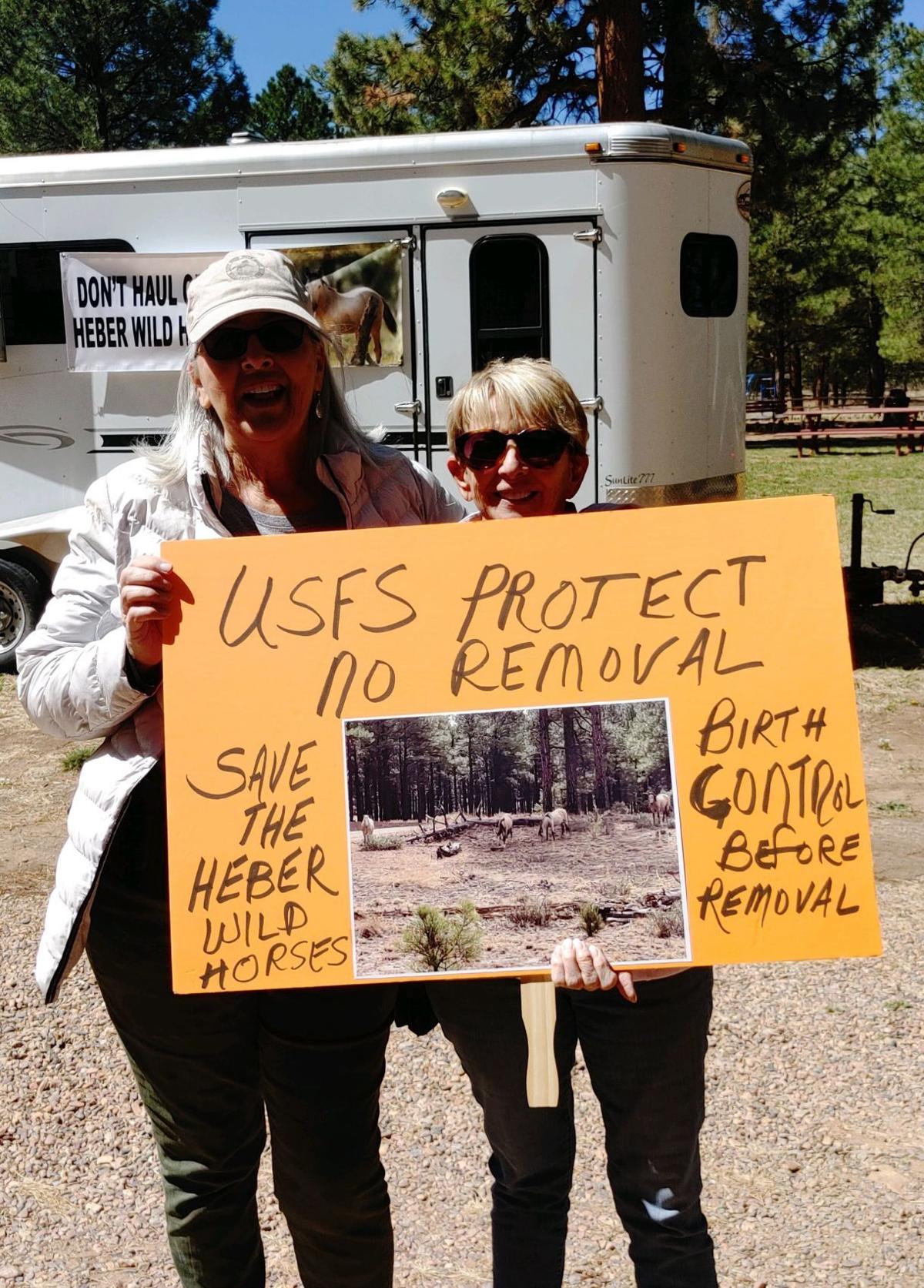 Supporters of the Heber Wild Horses hold a handmade sign to show that they want the USFS to protect the horses instead of removing them from the Apache-Sitgreaves National Forests. 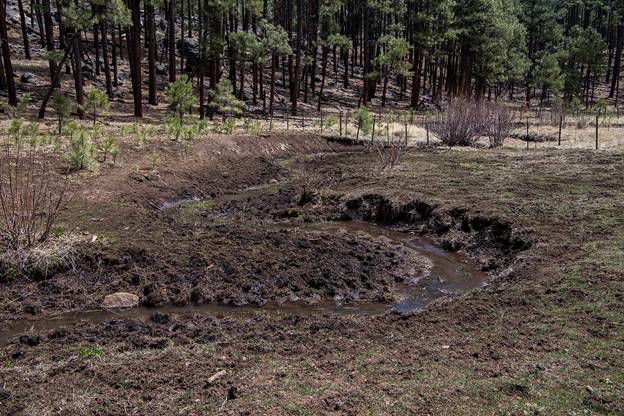 OVERGAARD — At least 100 people participated in a rally April 22 in opposition of the Heber Wild Horse Territory Management plan proposed by the Apache-Sitrgreaves National Forests (ASNF).

“Let them be wild and free”; “Stop erasing American History”; “They have been here before you”; “No roundup — We only want humane management,” read some of many handmade signs carried by protesters.

Area residents and equine advocates from all over the state marched from Tall Timbers Park in Overgaard to the Black Mesa Ranger District Office. They marched in opposition to the Heber Wild Horses Management Plan drafted by the Forest Service.

In 2007, the US Forest Service, Apache-Sitgreaves National Forests was ordered by Congress to develop a management plan for the 300+ Heber Wild Horses who became protected under the Wild, Free Roaming Horses and Burros Act of 1971.

After 14 years, the plan is in the final stages.

Those that disagree with the proposed Heber Wild Horses management plan argue the following:

To achieve the plan goals as written, the herd would have to be “culled” to 50 to 104 horses. Culling a herd is reducing the number of animals. How that will be accomplished is a source of vehement dispute.

“US Forest Service plans to decimate the Heber Wild Horses!”, according to a press release issued by the Salt River Wild Horse Management Group. “... The plan proposes the removal of nearly every wild horse living on the Apache Sitgreaves National Forest inside as well as outside of this last federally protected wild horse territory on Forest Service lands in Arizona.”

The culling process, say the advocates, is cruel because it is the “Rounding up hundreds of wild horses, separating them from their families, and sending them to an already overcrowded federal holding system...”

The wild horses of northern Arizona have lived on these lands for more than a century, even before the Apache Sitgreaves was a National Forest, according to Simone Netherlands, President of the Salt River Wild Horse Management Group. She cites evidence from the Arizona State Archives mentioning wild horses in the Heber area in 1907.

“They are proud part of Arizona’s history and heritage, and Arizonans want wild horses humanely managed, not rounded up and stuffed in holding pens,” says Netherlands in regard to how wild or free-roaming horses are considered iconic symbols of the west.

Netherlands says that what the ASNF refers to as an “Appropriate Management Level (AML)” is extremely low. She argues that 50 to 104 wild horses on 19,700 acres is “insane and inhumane.”

“That’s one horse for every 394 acres!” says Netherlands. “This number is far too low to maintain a genetically viable population of wild horses in the Territory. This will mean that the Black Mesa Ranger District will round up hundreds of wild horses in northern Arizona from Forest Lakes all the way to Show Low, as they are all outside of the official Heber Wild Horses territory.”

Should a population of only 50 horses be left on the Forest, this illegal killing of horses could literally decimate them overnight,” she says.

Controversy about the Heber Wild Horses has not diminished. Horses that have been shot dead in the forest over the last three years have put pressure on the ASNF to finalize and implement a management plan.

Advocacy and observation groups such as Friends of the Heber Wild Horses, the Heber Horses Freedom Preservation Alliance and Citizens Against Equine Slaughter are long frustrated with the illegal shooting of Heber Wild Horses on the Apache-Sitgreaves National Forests. To date, ASNF officials in previous press releases confirmed 28 horses died of gunshot wounds between October 2018 and February 2021.

ASNF officials, on behalf of the Law Enforcement Investigative division of the US Forest Service assure the public that they are still working to find the person(s) shooting the federally protected, free-roaming horses.

“We are unable to provide further comment on the active investigation at this time,” stated USFS Apache-Sitgreaves National Forests Public Affairs Officer in an email to the Independent dated Apr. 21. “ We will share information as we are able to with the public. We greatly appreciate public involvement and understand the importance of working with the public to best protect our shared lands. Furthermore, we continue to encourage anyone with information to reach out to We Tip Hotline at 1-800-78CRIME or to the Black Mesa Ranger District Office 928-535-7300. There is a $10,000.00 reward for information leading to the arrest and conviction of those responsible.”

There are a variety of theories about who might be shooting the Heber Wild Horses in the forest but the fact remains that no one has been charged in the crimes.

There is a long list of stakeholders that utilize public lands for camping, hiking, hunting, cattle grazing and recreating but the list of those that agree how to manage the horses is short. Also, some organization argue that the horses roam outside of the designated Heber Wild Horse Territory, damaging the soil and impacting the survival of other species.

The Center for Biological Diversity and Maricopa Audubon also have interest in preserving the White Mountains in Eastern Arizona on the ASNF for the Apache Trout and New Mexico Jumping Mouse. They filed a lawsuit against the Forest Service June 27, 2019.

“A local extinction of endangered New Mexico Meadow Jumping Mouse is taking place as the Forest Service has still not removed the feral horses in spite of the deteriorating situation,” states an Apr. 21 press release from the Center. “These feral horses are not part of the Heber Horse Territory which is approximately 80 miles to the northwest.”

The Center’s press release included photographs taken of the horses on April 8, 2021, according to the Center.

“The groups are calling for an updated management approach that keeps the wild horses on the public land, provides them with a fair share of forage and water resources, and manages their numbers humanely with fertility control, the immunocontraceptive vaccine utilized in both groups’ successful fertility control programs,” says Netherlands.