A mare in the Heber Wild Horse Territory in the Black Mesa Ranger District of the Apache-Sitgreaves National Forests looks up from grazing to see who, or what, approaches. 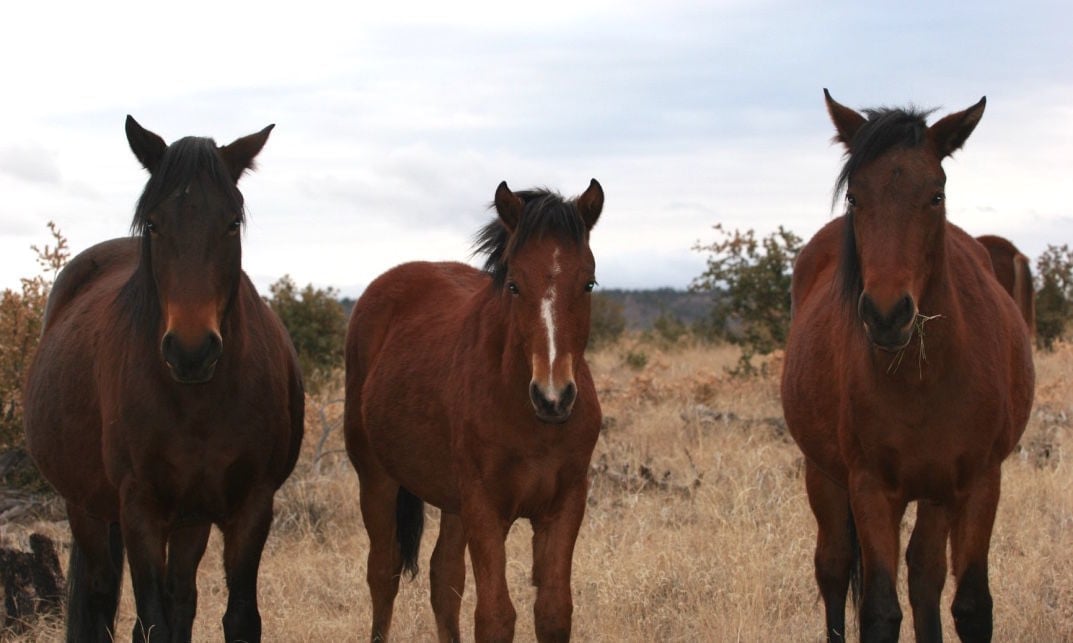 There have been several milestones in the effort to protect equines since Congress passed the Wild Free-Roaming Wild Horses and Burros Act of 1971. Although it’s been almost 50 years since the historic law was enacted, there continues to be debate, controversy and even grassroots movements in the interest of protecting wild horses and burros. The Black Mesa Ranger District of the Apache-Sitgreaves National Forests is home to 300 horses that roam the 19,700 acres designated as the Heber Wild Horse Territory. 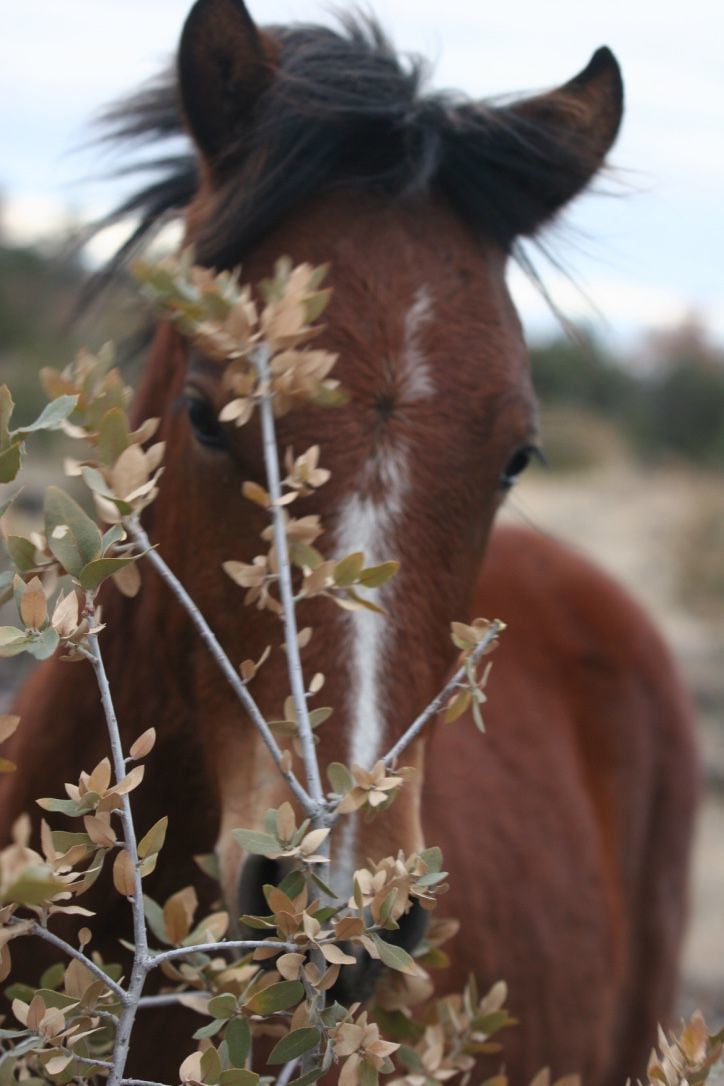 A mare in the Heber Wild Horse Territory in the Black Mesa Ranger District of the Apache-Sitgreaves National Forests looks up from grazing to see who, or what, approaches.

There have been several milestones in the effort to protect equines since Congress passed the Wild Free-Roaming Wild Horses and Burros Act of 1971. Although it’s been almost 50 years since the historic law was enacted, there continues to be debate, controversy and even grassroots movements in the interest of protecting wild horses and burros. The Black Mesa Ranger District of the Apache-Sitgreaves National Forests is home to 300 horses that roam the 19,700 acres designated as the Heber Wild Horse Territory.

WHITE MOUNTAINS — Thirteen years ago 19,700 acres of the Black Mesa Ranger District in the Apache-Sitgreaves National Forests were designated the Heber Wild Horse Territory following litigation initiated by horse advocates to halt a proposed round-up of horses in the area.

The 2007 settlement of that litigation included a stipulation to “collaboratively engage the public to complete a territory management plan for the Heber Wild Horse Territory,” (HWHT).

A December press release from Arizona State University’s Global Institute of Sustainability has documented completion of the first enormous step in creating a viable management plan for the nearly 300 horses living in the forest east of Heber and south of State Route 260.

The Forest Service, Arizona Game and Fish and the Arizona Department of Agriculture participated as observers to the work group and were occasionally called upon to provide relevant information, data and details about how the agencies make decisions that are within their legal obligations and guidelines.

“The overall goal of the formation of the working group was to convene a diverse group of citizens to seek informed, creative, solution-oriented recommendations for consideration by the Forest Service as it makes decisions related to the HWHT management plan,” says draft one of the final report summary published by ASU.

Why a formal work group?

“To clarify – the Forest Service needed to come up with a wild horse management plan for the Heber horses,” said ASU Associate Professor Michael L. Schoon.

And, neutrality is critical for the work group because of the controversial nature and competing interests surrounding wild horses including those currently living in the designated Heber Wild Horse Territory.

“The Forest Service is required to have a management plan as a result of the territory that was designated by Congress as a place for wild horses,” explained Schoon.

Who are the stakeholders?

Including members of ASU and SDR, there were approximately 14 to 20 volunteers who participated in the work group. These individuals were selected to represent “all potential interests related to this management,” states the press release.

What is the controversy?

The objective of the management plan is to “establish balanced use between permitted horses, livestock, and wildlife as part of the multi-use plan,” states the final report.

A number of items were among the issues stakeholders discussed. There is general disagreement on whether the horses are “wild/native or feral/non native.” As a result, some do not believe the Heber horses should be given protection under the 1971 Act. “It is believed [by some stakeholders] that the horses now in the territory are due to either horses migrating from the adjoining reservation or strays that have become accustomed to living at large,” states the report.

The responsibility of maintaining Heber Wild Horse Territory boundary fences between the Apache-Sitgreaves National Forests and the White Mountain Apache Tribe is unclear, which contributes issues with possible feral horses,

There is also perception that ranchers don’t want any horses on the landscape because of alleged overgrazing from horses that impacts cattle forage abundance, water, etc.

There is a perception that horse advocates do not want horses managed or controlled in any way.

Some feel that there is a lack of fairness that cattle use is monitored through fees, pasture rotation, changing stock rates, etc. and suggest a revision of permitted grazing to include allotment and forage allocation for both horses and cattle.

Some respondents were concerned about direct competition between native wildlife species such as deer, pronghorn and elk and the horses.

In summary, “Many interviewees indicated that forage availability and habitat impacts are the main challenges to managing horses in the HWHT,” states the report. Management theories vary greatly depending upon stakeholder interest, experience and perspective.

For this reason, the report recommends the utilization of scientific data measuring livestock grazing capacity and current range health conditions. For example, management of rangelands livestock considers the estimated amount of forage a cow will eat in a day.

The same must be determined for horses and other forage consuming wildlife such as elk, deer, antelope, etc. A formula called Animal Unit Equivalency, prepared by the U.S. Department of Agriculture, is recommended in determining how much pasture is required for a specific number of animals.

Of course rain affects forage growth and all the animals compete for forage so climate studies are an element of the work group recommendations. Rain gauges, measuring soil cover and assessing vegetation condition were also recommended.

“The strong force exerted by climate on forage conditions is well known and likely the primary driver of ecological conditions,” says the report. “Thus, an increased emphasis on climate monitoring is essential. Precipitation is the key variable...” adds the report.

Developing protocols for emergency measures needed during severe droughts such as water hauling and supplemental feeding were recommended in addition to climate and drought tracking.

Using telemetry collars was suggested as a way to estimate actual horse population numbers as they change and as the horses move back and forth in the territory. Aerial surveys, volunteer observations and camera technology were also recommended as ways to obtain data.

Pros and cons of several methods of horse population management were provided in the report. They included information on the least invasive methods of population control to the most invasive.

The use of birth control agents was considered least invasive while neutering older stallions after breeding had been established was also an effective and affordable option. More invasive and expensive methods included the removal or relocation of horses to sanctuaries and equine adoption organizations.

What is the next step?

The Apache-Sitgreaves National Forests will “seek to integrate the group’s findings into the formal National Environmental Policy Act (NEPA) public scoping process and the overall development of the management plan for the HWHT by 2020,” states the report.

The Forest Service will now work on developing a written action plan. Public meetings will also be held to gain public input for the plan.

“I want to emphasize that everyone in this work group cares about these horses and wants to make sure that these horses are healthy and safe,” assures Schoon. “We brought together groups that don’t always get along and we were able to build rapport and a sense of community to make decisions. It took a long time but it was simple and effective.”

To view the Heber Wild Horse Territory Collaborative Working Group Final Report, DRAFT 1, in it’s entirety, visit https://www.fs.usda.gov/goto/asnf/HWHT. Look for the drop down list on the “Updates” tab for the report.

Due to holiday schedules, the Independent was unable to get comments for this story from individual stakeholders in the working group.

what a bunch of horse pucky. Time to go horse hunting

Southwest Decision Resources have been paid at least $139,762 to operate their so-called public input (actually done behind closed doors) meetings per usaspending.gov. And yep … you and I paid for this revolting procedure.
And how did they manipulate the Heber Wild Horse Collaboration meetings?
Answer: by using the old “spin doctor” method of control via manipulation. Mind control (also known as brainwashing, coercive persuasion, thought control or thought reform) refers to a process in which a group or individual systematically uses manipulative methods to persuade others to conform to the wishes of the manipulator(s).

In other words, the ultimate decision was already decided by the USFS and they hired the Southwest group to use manipulation to make it look like it was a legitimate group study which it was not.

Obviously the one and only true wild horse advocate (Mary) in the study group refused to follow the desired end result of the USFS and so she was “fired”.