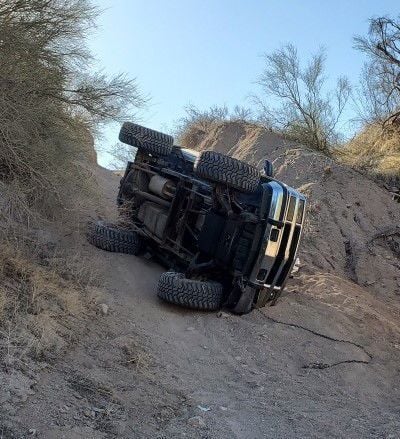 An off road vehicle awaits rescue after rolling over during an illegal Saturday, April 3 gathering around 5,000 partiers on the Lower Sycamore. 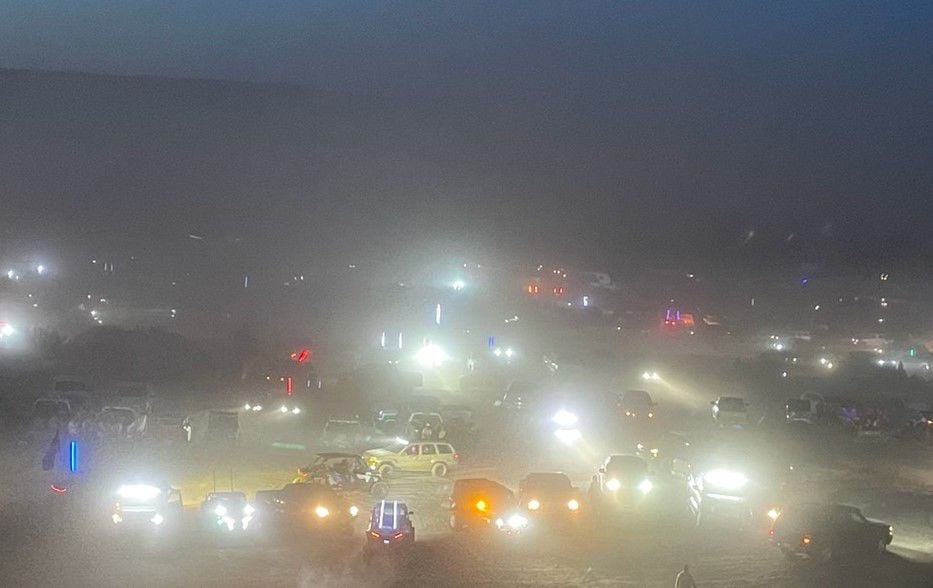 Hundreds of vehicles with headlights blazing create  a surreal atmosphere at a Saturday, April 3 unauthorized gathering of around 5,000 partiers on the Lower Sycamore in the Tonto National Forest near Payson.

An off road vehicle awaits rescue after rolling over during an illegal Saturday, April 3 gathering around 5,000 partiers on the Lower Sycamore.

Hundreds of vehicles with headlights blazing create  a surreal atmosphere at a Saturday, April 3 unauthorized gathering of around 5,000 partiers on the Lower Sycamore in the Tonto National Forest near Payson.

PAYSON — It is not illegal for people to gather in a national forest.

It is however illegal when numbers ranging at or above 5,000 people don’t get a permit and don’t have all of the safety measures and other requirements in place to make it a safe gathering.

And it certainly would not allow hundreds if not thousands of off road vehicles to destroy forest property.

But that is exactly what happened April 3 when about 5,000 people illegally converged on Lower Sycamore in the Tonto National Forest west Payson.

The immediate consequences of which was at least seven vehicle collisions with one unidentified person (involved in a collision between two off-road vehicles) who had to be helicoptered out because of the severe congestion of vehicles.

Additionally, forest service officials said there were multiple reports of stolen off road vehicles at the large gathering.

The Tonto National Forest Service requires a special permit for a gathering of 75 people or more in the forest.

One of the problems encountered by Forest Service and local law enforcement who responded to the unauthorized April 3 “party” was that according to Forest Service officials, the partiers had taped off and blocked off access to the area with their vehicles on the Lower Sycamore making it virtually impossible for law enforcement and other emergency personnel to get in or out.

And that was not the least of it according to an online post on the Tonto National Forest’s Facebook page.

All of this when the forest is in reality already experiencing high fire danger due to ongoing drought and minimal snowfall or rainfall in recent months.

So how did 5,000 people get notified or otherwise find out about a gathering on the Lower Sycamore?

Apparently it was social media.

“The Tonto National Forest has seen an increase in Facebook ‘meet up’ events on the forest. These events are not authorized unless a permit application is submitted and approved by the USDA Forest Service. Permits are required for groups and/or events of 75 people or more. Large group gatherings like the one that occurred on (April 3) have significant adverse impacts on forest resources, public health and safety. ...”

A permit system allows the agency to address these problems more expeditiously, more effectively, and more equitably. These adverse impacts include the spread of disease, trash and debris from inadequate site clean-up, soil compaction, damage to archaeological sites and traffic congestion,” Susan Blake with the Tonto National Forest said.

Apparently people also engaged in discharging firearms and having campfires in areas where either could have resulted in a wildfire.

An email from Blake on the incident stated that the Forest Service considers any and all requests for a permit before making a decision adding that if certain requirements can’t be met, for example, to mitigate resource damage or to provide for public safety, a permit could be denied.

She said that as stewards of the forest, personnel have a duty to minimize resource impacts on National Forest System lands.

As for the issue of social media being used to inform anyone at all of such a gathering, Blake said it is an growing problem.

It's only going to get worse, free unemployment money and stimulus checks equals fun and play with no regard to law and safety.