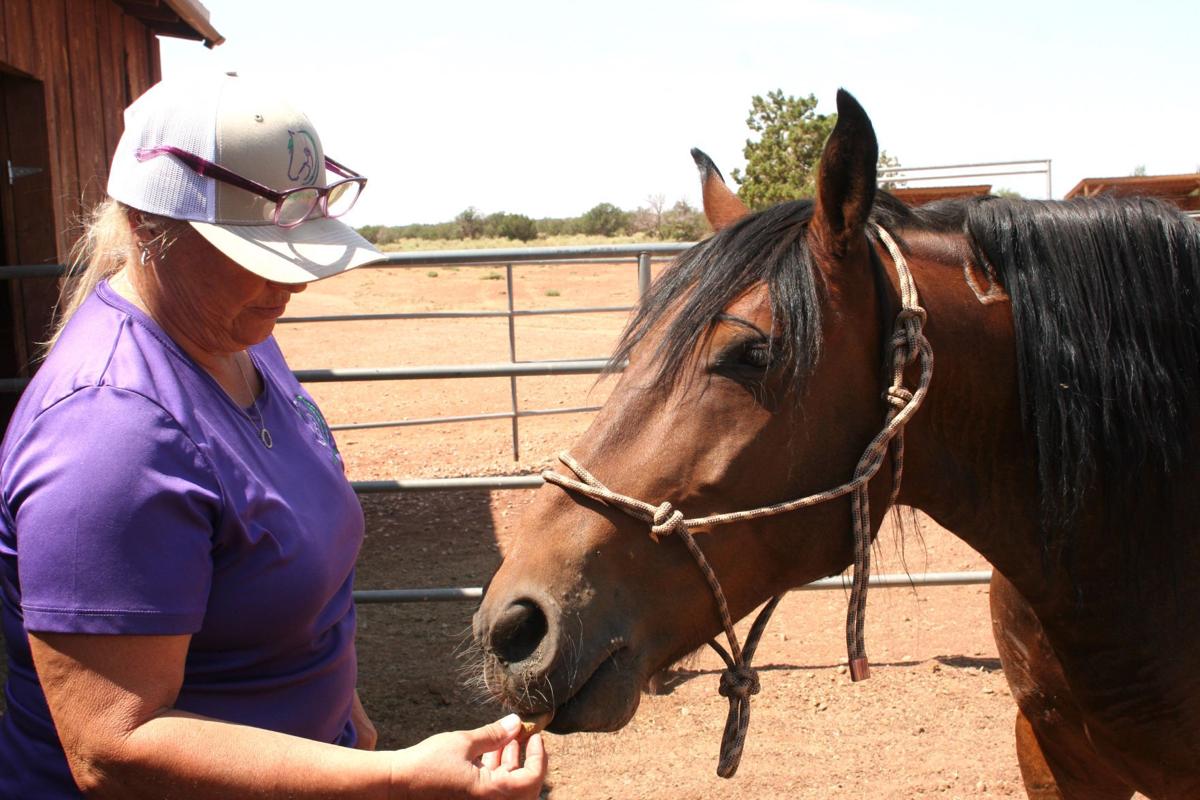 Christine Griffin feeds Jake a treat. He is still healing from his wounds after being hit by a vehicle on July 27. The gelding was with four other free-roaming horses that were crossing U.S. 60 near Summer Pines. 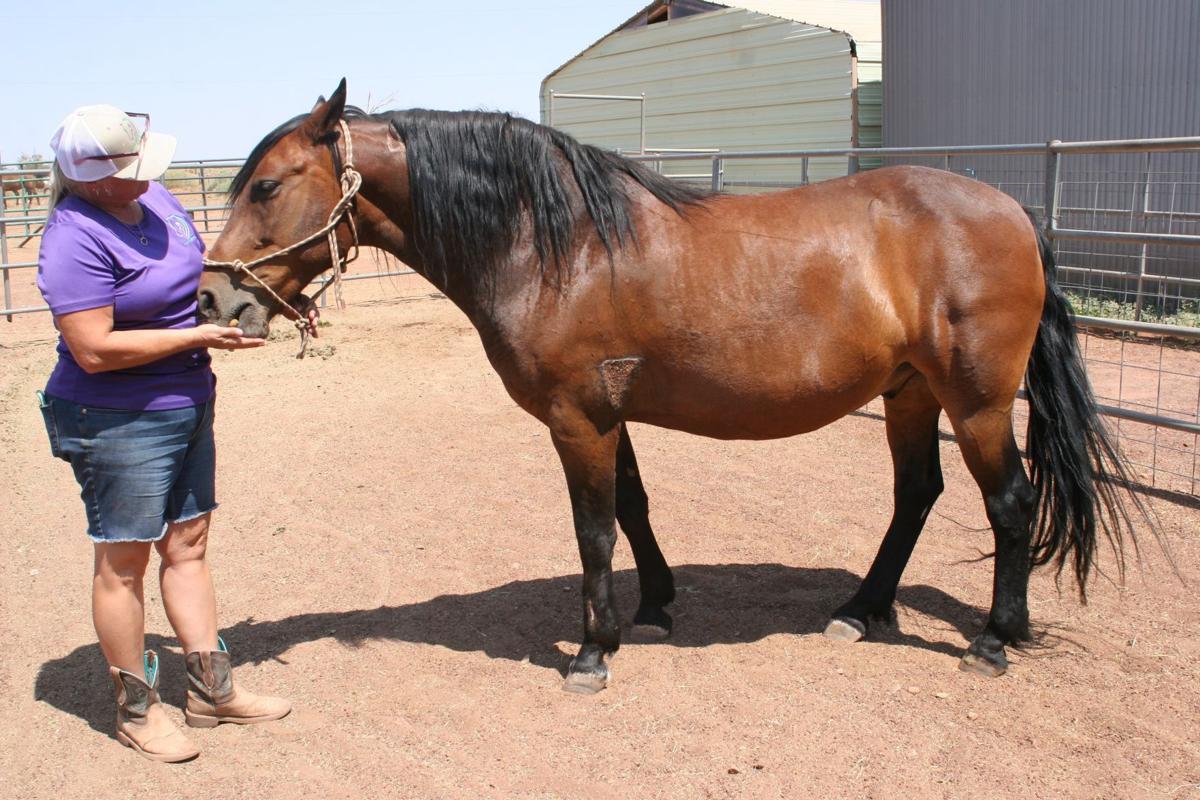 President of Equine WellBeing Rescue, Inc. in Snowflake feeds bay gelding, Jake, a treat. The 10-11 year old horse is in the care of the local rescue after being hit by a car on July 27. His left front leg was badly injured and required multiple surgeries.  Jake is a BLM Mustang now owned by the rescue. It unclear how he came to be free-roaming in the Apache-Sitgreaves National Forests after being adopted from the BLM.

The blue roan filly that was with the small herd of horses crossing U.S. 60 on July 27 did was euthanized after being hit by a vehicle on U.S. 60.  The accident occurred in the early morning hours before daylight. Multiple agencies, veterinary and equine experts tried to save the horse but she had suffered internal injuries. 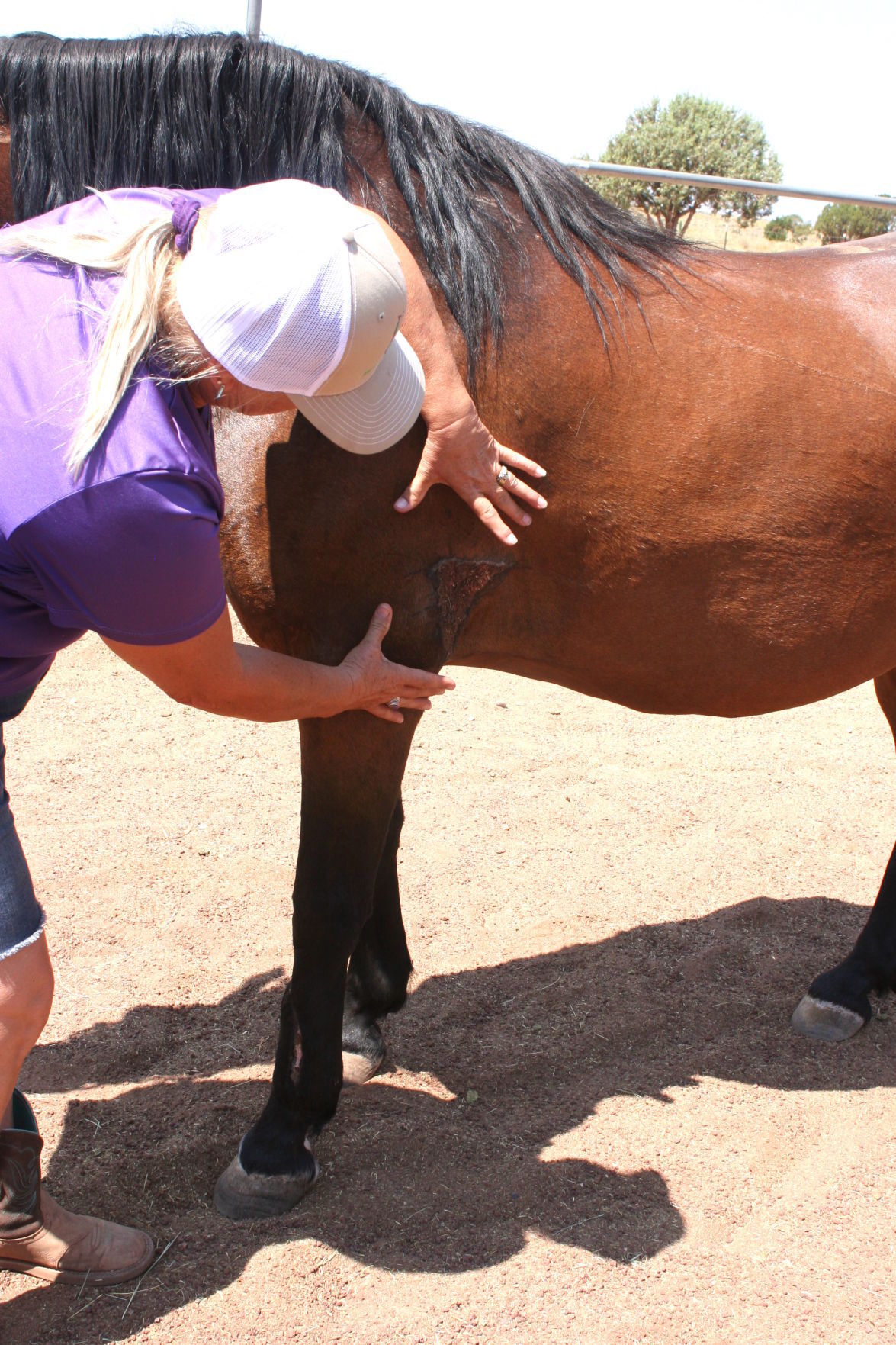 Christine Griffin demonstrates how big the would was, initially. "Sweet Jake is doing so good," said Griffin. "We have discontinued the antibiotics and reduced the pain meds ... It will take many more weeks for it to completely heal. He no longer limps or has swelling along his ribs and left hip. We are so happy that he is feeling better. Thank you all for supporting him so we can provide for all his needs." 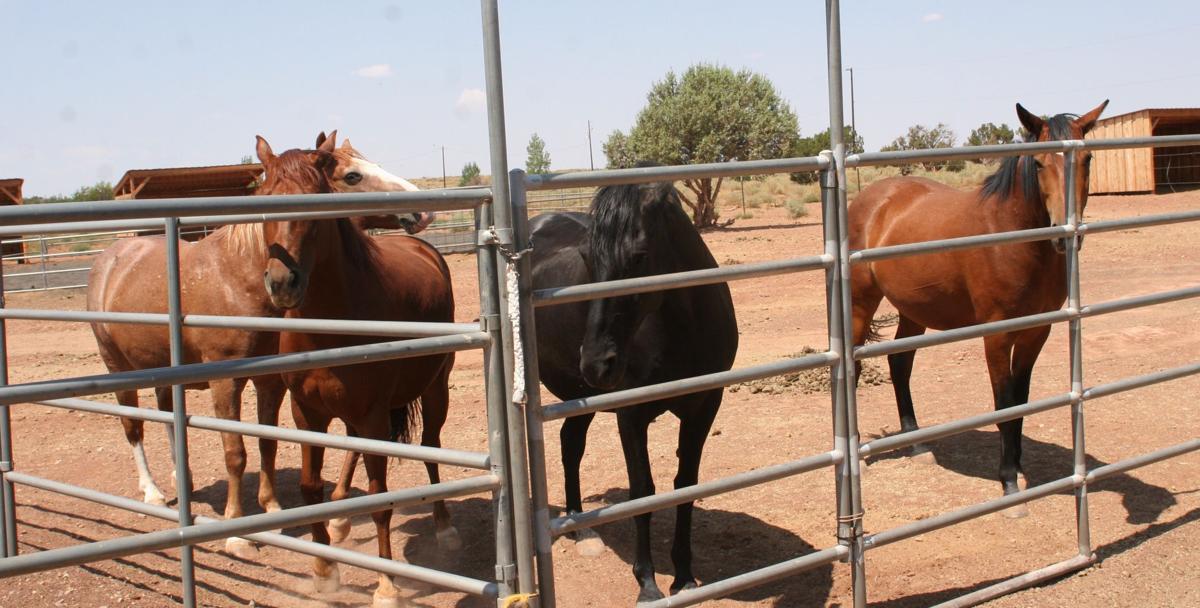 Several other horses at the rescue look on while Jake is getting all the attention. Jake is kept separate from the other horses to allow his wound to heal. 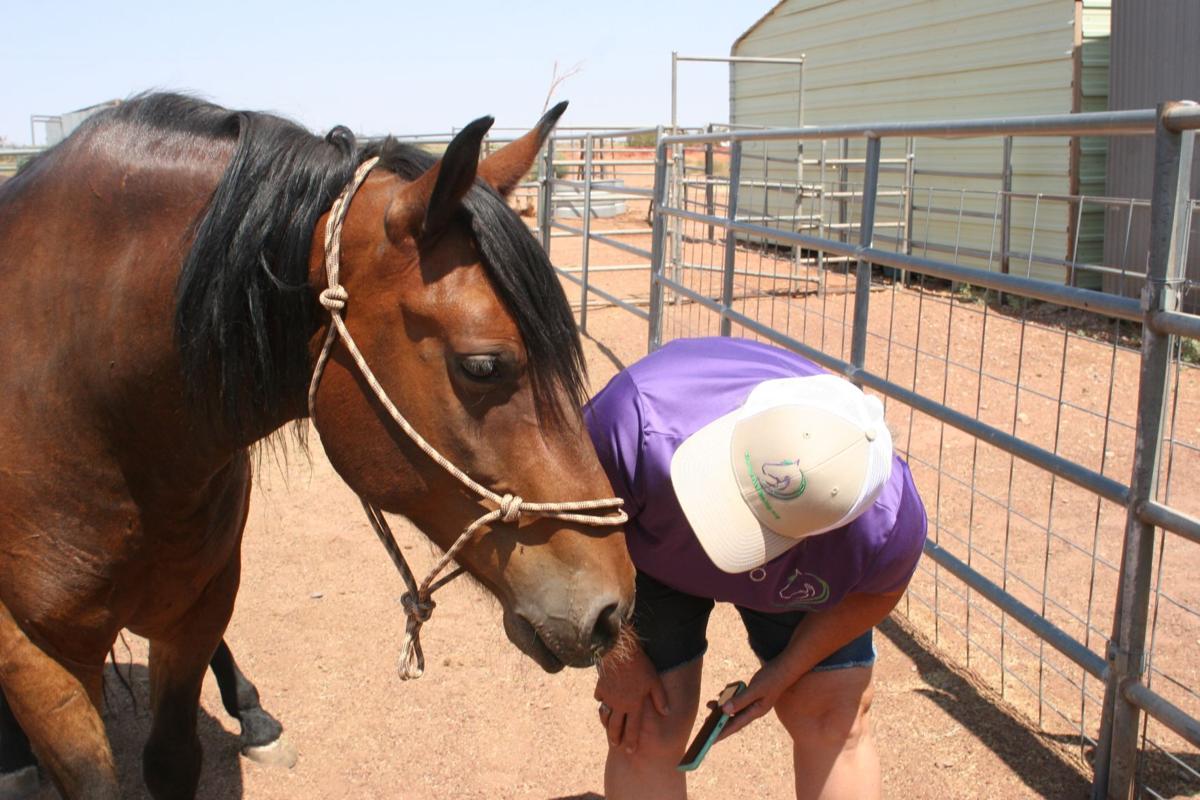 SNOWFLAKE — A sturdy bay gelding named Jake has been convalescing at Equine WellBeing Rescue, Inc. in Snowflake. He does wear khaki but it's a khaki-colored halter, not a shirt like in the State Farm television commercial. Either way, Jake wears his khaki halter well.

The horse came to be in the care of the Snowflake equine rescue on Monday, July 27. Jake and a filly were hit by a car on westbound U.S. 60 around 5:22 a.m. near Summer Pines in Show Low.

The accident happened on the same day as police responded to a call about an armed man at the Walmart in Taylor. That morning, first responder resources in Show Low, Snowflake/Taylor and Pinetop-Lakeside were taxed, to say the least.

A 43-year old female from Gilbert driving an SUV that collided with the horses reported the Department of Public Safety (DPS). A trooper patrolling the area came across the woman's vehicle right after the accident happened.

"She was the only occupant of the vehicle. The vehicle was not moveable and was removed from the scene by a tow truck. This was not a hit and run," stated the DPS Public Information Office Supervisor Sgt. Kameron Lee in an email to the Independent.

Jake's wounds required three surgeries and his aftercare and healing continues. The blue roan filly had to be euthanized after it was determined by veterinary experts that she had suffered internal injuries from the accident.

Catching two injured, frightened horses in 90-degree weather was no easy task. But, boots on the ground from DPS, Equine WellBeing, the U.S. Department of Agriculture, Navajo County Sheriff's Office and others worked in sync to get the job done.

The gelding was easier to catch than the filly since he was more accustomed to humans. Summer Pines residents alerted the rescuers to the filly who had run into the residential area.

"It took several people, several hours to sedate, catch and get her loaded in the trailer to be taken to the vet," said Griffin who was on scene. "When we arrived we found her standing, pawing the ground and in shock," said Griffin. "She had large injuries to her left side and smaller injuries all over. It appeared, on impact with the vehicle, she must have been flipped over based on all the wounds."

The filly had to be euthanized after determining the severity of her injuries.

Equine WellBeing paid for his medical treatment as well as his feed, water and shelter. His medical expenses were in excess of $1,400 back early August and have probably increased since then.

Through the freeze brand on his neck, it was determined by the authorities that the Jake is a registered Bureau of Land Management (BLM) Mustang who was adopted by someone at an earlier date. The individual that the horse was titled to was contacted and "denied ownership."  Jake was then "determined to be a stray horse that had been roaming loose in the forest, giving the Arizona Department of Agriculture complete jurisdiction to deal with him," according to incident reports.

Had the agencies not worked together to get ownership of Jake legally transferred to Equine WellBeing, "he would have been taken to a local auction house, put in a pen to stand untreated for at least 7 days, when he could be auctioned as a stray horse," said Griffin. "That is 7 days to allow the owner time to claim the horse and if not claimed, by law they must be auctioned. As a newer vendor for the Arizona Department of Agriculture, Equine WellBeing Rescue could house him instead and he could be auctioned at our place if unclaimed."

Equine WellBeing is an approved vendor with the Arizona Department of Agriculture (AZDA) which is why they were contacted to assist with the injured horses. The horse also had to be examined by the AZDA -Livestock Division brand inspectors, Rudy Mejia and Kevin McFee. This is done to help determine ownership which was a BLM adopter in Jake's case.

"We knew (Jake) was coming and we are prepared to treat his injuries even though there were two days old," said Grififn. "Dr. Helzer arrived and after two-and-a-half hours of surgery, he was stitched up as well as he could be with the size of the injury and extent of the swelling. He was immediately administered pain meds and started on antibiotics and a treatment plan established."

DPS, Navajo County Sheriff's Office, the AZDA Livestock Division, Apache-Sitgreaves National Forests and the Department and the Bureau of Land Management were involved in the situation of how to care for the animal.

Sgt. Tormohlen "stuck with the situation, working with all the various agencies to help the horse get the needed care ... And yet, he does have a khaki halter," said Griffin.

It is theorized that multiple area residents may have been feeding the horses alfalfa, grain or sweet feed. Although done with the best of intentions, free-roaming horses can founder or develop insulin resistance by such feeding. It also encourages them to cross roadways they would not otherwise cross.  To minimize the hazards to humans and horses, feeding free-roaming horses is discouraged by equine experts.