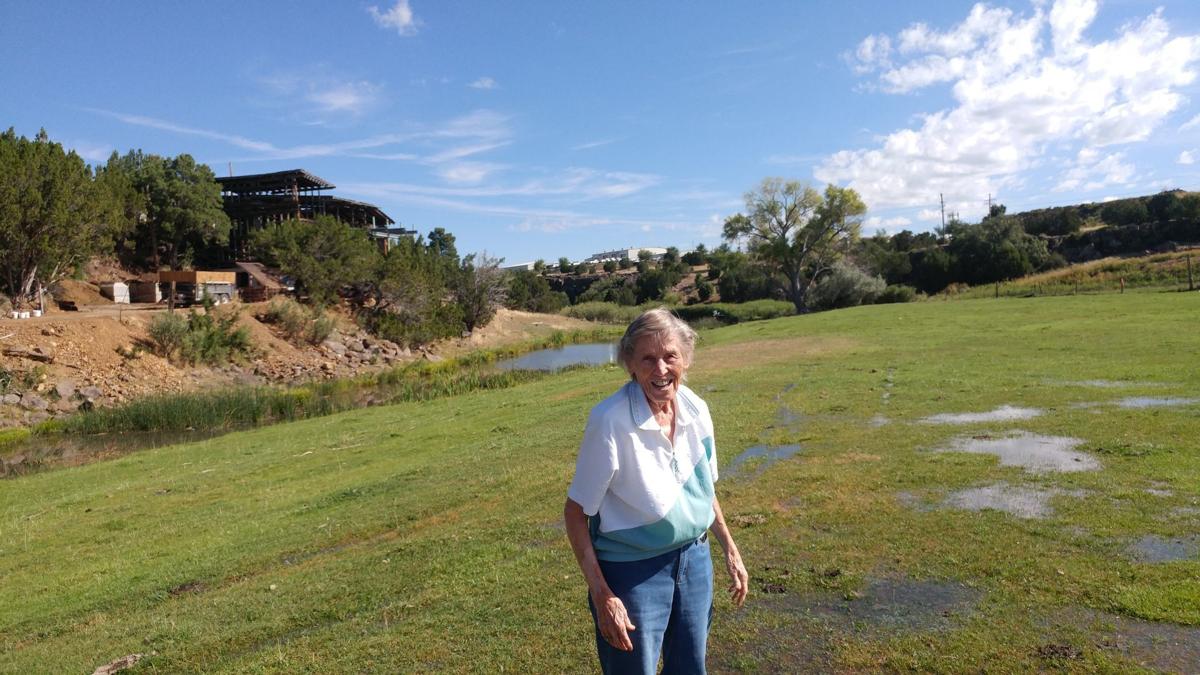 Joy Owens on her property near Show Low Creek. 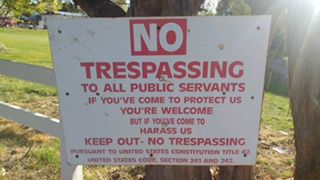 A sign near the driveway of one of Joy Owens properties.

SHOW LOW—Joy Owens is a fighter — a 90 year-old, hard-of-hearing, hard-boiled fighter, and she happens to be a defendant in a city court case about zoning ordinances in Show Low.

Her trial started August 27 but it’s not over. During a several-weeks break in the trial, I took her up on her offer to tour the property at issue and hear her side of the story.

Owens has the energy of a nine year-old. She is slightly built with bright blue eyes. Beyond spry, she seems to take an impish delight in being a little troublesome, especially to those in authority. She is old-school, from a old local family of self-supporting pioneers. She believes in her “God given right” to run her property as she sees fit and seems downright contemptuous that a bunch of nanny-state bureaucrats want to push her around, as she sees it.

Joy is sharp as a tack with a kind of honest, frank, no-BS way of seeing the world. She exudes a type of light, a spirit of true goodness, somewhat obscured at first by her feisty, in-your-face, personality.

“They are not sheds!” was one of the first things she told me when I walked into her modest home near the library in Show Low, referring to a statement in a previous story.

Our meeting was pleasant enough and we soon found ourselves touring the sprawling, beautiful property in the heart of the city through which runs Show Low Creek. Her daughter joined us. The 40+acre property is roughly bounded by 6th Street on the north and the new county complex and soccer field along 9th Place to the south.

Against her wishes, the City of Show Low annexed the property into the city in 1974. Owens recalls that her family actually donated the land to the city which now is the Show Low Cemetery.

We first went to a strip of land along Central Avenue that used to be hers. In the late 1990s, the city needed it to expand the avenue and under threat of losing it through eminent domain, Owens sold it to the city for $185,000 and certain promises. The promises she said, concerned what to do with 17 mobile homes that had to be moved off the strip of land for the widening project. They had to be relocated somewhere, and the city, she says, promised to waive certain “impact fees” that normally apply to setting up mobile homes, along with other promises.

She then took us to the end of a dirt road off 6th Street where five of the mobiles had been relocated in a pattern that reminds one of the top half of the Wal-Mart logo. The homes get their water from a well on the property and use a sewer hook up, and that’s one of the issues at the trial. The city says she hooked into the city sewer system without a permit and without paying the hook up fee.

“Nonsense!” says Owens. The city itself did that as part of the deal about moving the mobile homes, and she has paid the hook-up fee.

Next, we went to another grouping of buildings and that’s where the “sheds” issue comes in. The structures resemle double-wide mobile homes, were used once as portable classrooms somewhere, each accommodating 80 students. In its chief complaint, the city recited a tangled litany about Owens’ property having been rezoned to allow a shed-building business that a man had proposed to operate on the property, but then changed his mind and the business went nowhere.

Owens moved the school buildings on the property in anticipation of opening a type of self-storage business. “(A brother to City Manager Ed) Muder rented one,” she says.

The building were described as “sheds” in a September 10 news story and Owens was decidedly unhappy about that. She also says that a family, young relatives, had been living in a tent somewhere. The mother was pregnant, so Owens allowed the woman to stay in one of the buildings. The city says using the structures as housing is illegal, and cited her for it.

In response, Owens sought and received yet another change in zoning appropriate for setting up a mobile home park. She says the city inspected the structures, came up wth a sort of punch-list of things to be remedied before a use permit would allow her to operate a mobile home park. The city requires the permit even after the zoning change.

In the typical pioneer spirit, Owens and her husband began the required improvements themselves, but Mr. Owens passed away and Joy broke her hip. That delayed things.

Next we went down to the creek and the issue of the “flood zone.” The city has cited her for having erected a Quanset hut near the creek that is in a flood zone, saying it has to be torn down.

“Flood zone?” Owens erupts. If there’s a flood zone, the city caused it by messing up the natural drainage to the creek, she contends. That happened after developments of the Coca-Cola plant, the building the CAL Ranch store is in now, and a soccer field.

And what really gets her goat, is the fact that the creek now is clogged — that’s your flood zone, Owens says. The city won’t clean it up even though Owens produced a letter from the Federal Emergency Management Agency that says that the city is responsible for that.

Seventy-five years ago, Owens recounts, her husband used to dredge the creek with a team of horses to keep it running, so Owens undertook to clear it herself using Boy Scouts, hired hands and machinery. It’s overgrown with weeds, trash, dead animals, beaver dams and sodden mattresses discarded from nearby hotels.

Nope, the city says that she’s not allowed to do that, either, she claims.

Then there was the issue of having a septic tank in a flood zone. Funny the city should complain about that, urges Owens, when the city maintains an open sewer pit adjoining the creek and used to pump raw sewage into the waterway. The pit leaks, she says. She also complains that, after the city approved the developments listed above, they asked her to allow a drainage ditch to be run over her property to address the drainage problem. She allowed that and asked for no compensation for it. But the part-dirt, part-concrete sluice has deteriorated leaving in one spot that I observed, a sink-hole large enough to swallow a person or large animal. Owens claims the city refuses to fix it.

Concerns like this have not helped the parties come to a resolution. She says that the city won’t clean up the creek, won’t fix the sink-hole they created, want her to move things out of a flood zone that she says the city created (her expert witness, and engineer, says structures there are not in a flood zone) and now want to fine her and have her incur huge abatement costs for exercising her “God-given right” to her private property.

And she is not alone — on the morning of her trial the gallery of the courtroom was packed with dozens of her very animated supporters.

True to form, after city attorney F. Morgan Brown’s opening remarks, Owens blasted him for telling lies. In fact, after Judge Stephen Price swore in the witnesses, Owens barked to the judge, “What about you? Aren’t you going to take an oath to tell the truth?!”

During our interview, I observed to her that her demeanor probably didn’t endear her to the court or the city attorney. To that, her eyes lit up and she put her hand over a very wide impish grin.

The trial is scheduled to resume October 10.