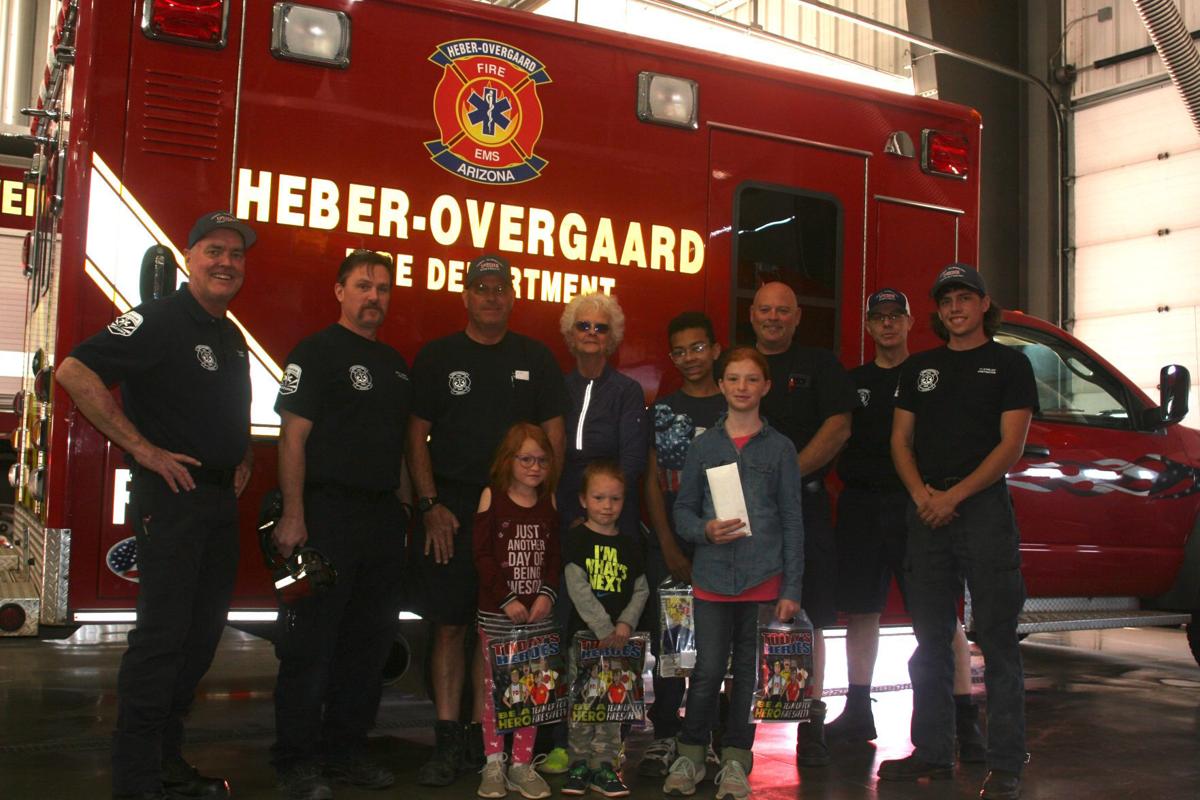 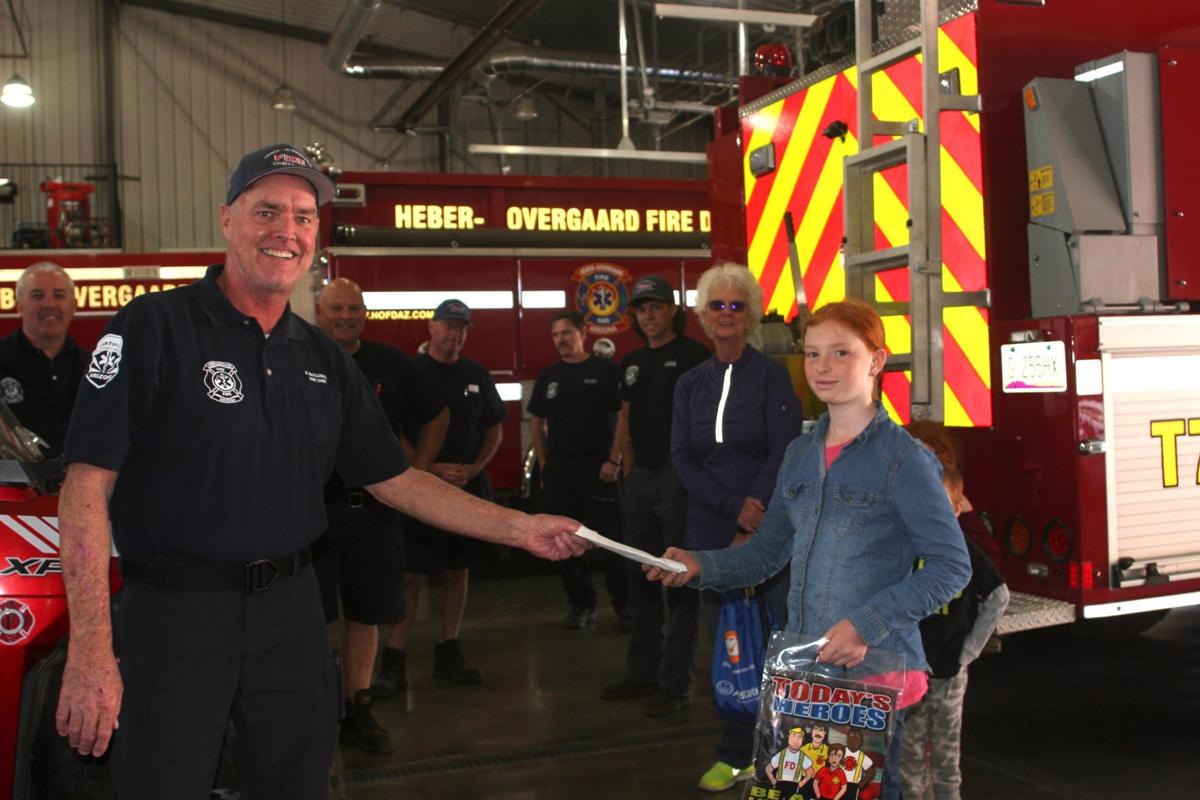 Heber-Overgaard Fire District Chief D. McCluskey, (left), accepts the $100 (and change) donation from Accalia Reidhead, age 10. Her siblings and cousins — Stryder Thorson, Emeline Reidhead and Barrett Reidhead, are behind her with their grandmother, Susan Thorson. In the background are six other crew members. 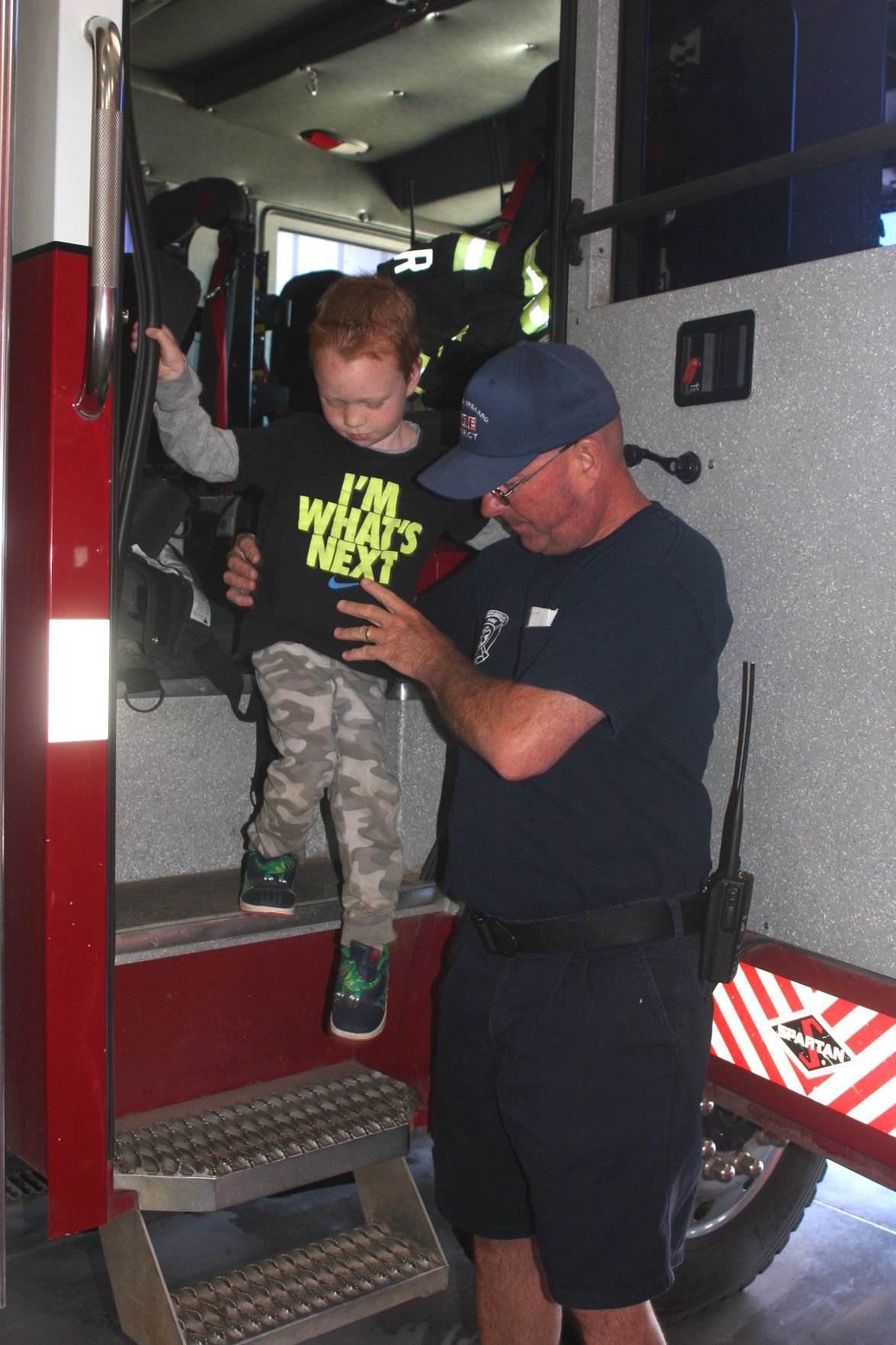 Heber-Overgaard Fire District Chief D. McCluskey, (left), accepts the $100 (and change) donation from Accalia Reidhead, age 10. Her siblings and cousins — Stryder Thorson, Emeline Reidhead and Barrett Reidhead, are behind her with their grandmother, Susan Thorson. In the background are six other crew members.

HEBER-OVERGAARD — How do you spend your time with grandma when school is not in session? Some kids might play outside, challenge one another to video game matches or ride bikes. But after the fun and freedom of an extended summer wears off, some kids get to thinking about others.

This is just what four Overgaard kids did under the guidance of their grandmother, Susan Thorson. The kids decided to raise money to donate to the Heber-Overgaard Fire District crew.

Stryder Thorson, 13; Accalia Reidhead, 10; Emeline Reidhead, 7 and Barrett Reidhead, 5, got going and mixed up batches of lemonade and sold them mostly to friends and neighbors for .50 cents per plastic, red solo cup.

The neighbors had a shady front yard and “we so kind to let us set up in their shade,” says Thorson. The foursome sold their icey lemonade for three to four hours on both afternoons.

“They raised $100 and change,” reported Thorson. “A couple of years ago they wanted to raise money for a swimming pool but they didn’t get quite enough. They went out to lunch on the money instead.”

“Raising money to say ‘thank you’ to the fire department was Emeline and Accalia’s idea,” says Thorson “but they all wanted to be part of it.”

That was okay with the kids, added Grandma Thorson, they just set their sites on doing good for someone else.

On Wednesday, May 13, Grandma Thorson drove the charitable bunch to the fire district to deliver the money. In return, the kids were greeted with friendly smiles and invitations to see the fire trucks, ambulances and other apparatus.

“They all got to ride around in the fire truck too,” says Thorson.