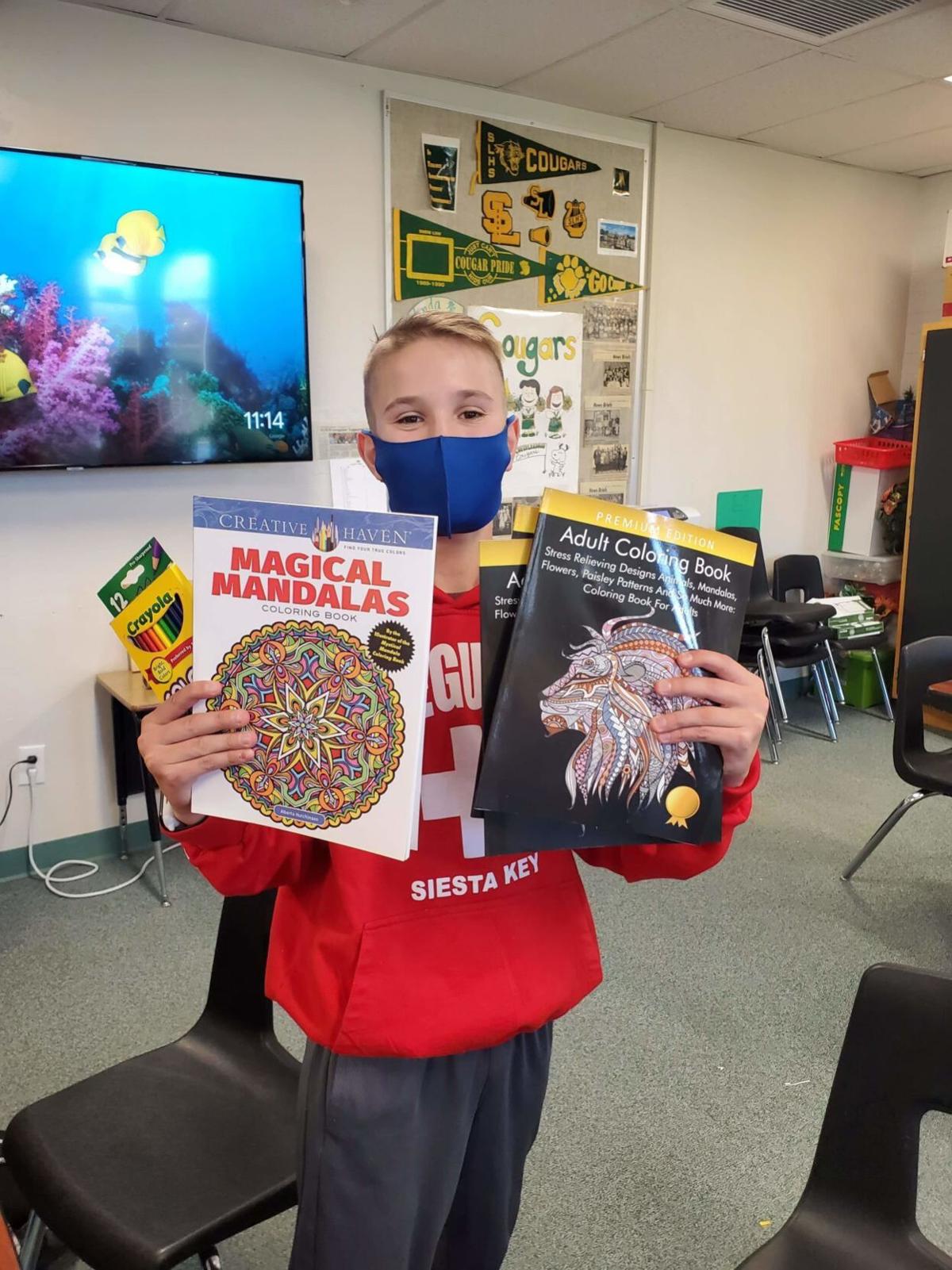 Above, Allyson, a seventh-grade student at Show Low Junior High School, shows some of the games, snacks and goodies while Max, below, an eighth grader, displays a few of the sophisticated coloring books purchased by their teacher Glenda McMillan. 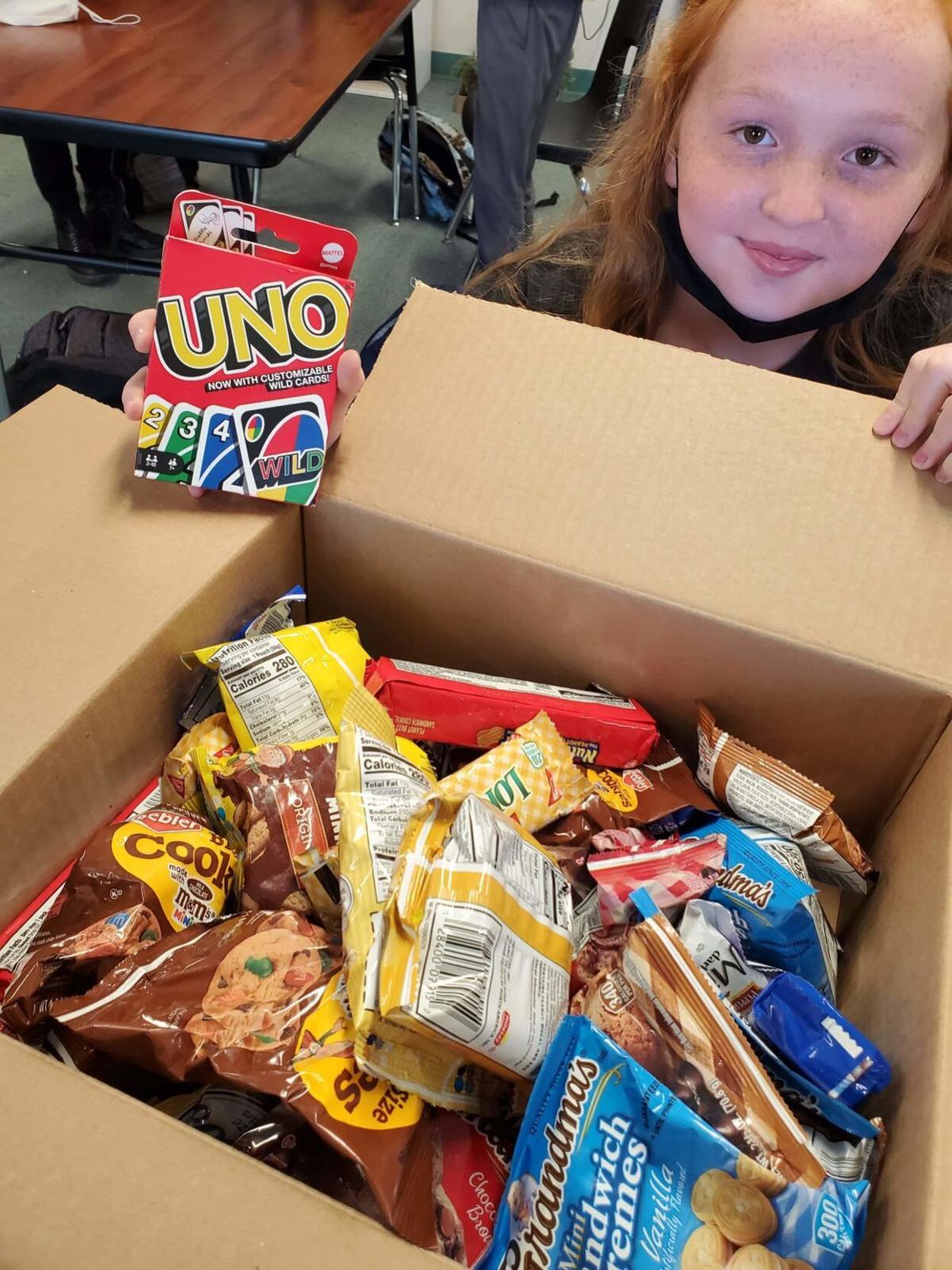 Allyson, a seventh grade student at Show Low Junior High School, show some of the games, snacks and goodies purchased by her teacher, Glenda McMillan. McMillan was awarded the most votes and her project "Let's stay positive" was funded through DonorsChoose and the Limeades for Learning program.

Above, Allyson, a seventh-grade student at Show Low Junior High School, shows some of the games, snacks and goodies while Max, below, an eighth grader, displays a few of the sophisticated coloring books purchased by their teacher Glenda McMillan.

Allyson, a seventh grade student at Show Low Junior High School, show some of the games, snacks and goodies purchased by her teacher, Glenda McMillan. McMillan was awarded the most votes and her project "Let's stay positive" was funded through DonorsChoose and the Limeades for Learning program.

SHOW LOW — Show Low Junior High School teacher Glenda McMillan has no time for worrying about the downside of 2020.

Known for her good cheer and inspirational ways in the classroom, McMillan was the top vote-getter by Sonic Drive-In fans. The contest votes earned her over $500 for classroom supplies.

The 12-year running Sonic program encourages school teachers to create a “request” for something specific that can be used in their classroom. Materials to create an engaging learning environment are the focus.

The Limeades for Learning campaign ran from Sept. 28 to Oct. 25. Local, state and national Sonic fans who know McMillan, her school or her students voted for her request which she named “Let’s stay positive.”

So how does funding from a national fast food drive-in like Sonic funnel down to a teacher in a small, rural school district like Show Low? The answer is in a partnership with a nonprofit teacher funding platform called DonorsChoose.

McMillan has utilized DonorsChoose many times and continues to promote it as a way for the immediate community to donate to local schools.

“I had been involved with www.DonorChoose.org for 15 years,” said McMillan. “They are an online organization that allows people that are nonprofit to request supplies for their classroom.”

She said that churches, Boy Scouts, Girl Scouts and many other non-profit organizations can do the same thing that she has.

“DonorsChoose has some restrictions but I’ve been working with them forever and have been very successful,” said McMillan. “What’s most impressive is that all the people that use it because it’s a national organization. People have donated to my campaigns over the years from New York, California, Oregon and Virginia. It’s really popular during the holidays because the donations are a tax writeoff.”

In addition to her participation in Limeades for Learning, McMillan said that she took things a step further to promote her motto of “Let’s stay positive.”

She created a positive reinforcement and rewards system called the Positive Behavior Incentive Program for her students. Other teachers and students joined in because they liked the idea.

Students were awarded point from teachers throughout the school during McMillan’s Positive Behavior Incentive Program. After submitting the idea, the documentation and the point system, Sonic funded McMillan $572.64 for the entire sixth through eighth grades at Show Low Junior High School.

Over the last decade, McMillan has used DonorsChoose to earn about $2,000 in donations for her classroom.

“That’s what people have donated from this community, from my family, from all over the country — it’s anyone who wants to support education whether they know us in Show Low or not,” said McMillan.

Through her Positive Behavior Incentive Program, the students can purchase things with the points they have earned. Examples of what the students earn include but are not limited to: Uno card games, cookies, racquetballs, Post-it notes, Crayola pencils, motivational stickers, activity books, sophisticated and themed coloring books for teenagers, candy, stress-relieving coloring books, magical mandalas coloring books, pens, pencils and colored markers, games, watercolor cactus bulletin board signs and double-sided tape to put the Mindset Growth posters on the wall throughout the school.

These items were purchased with the $572.64 that was awarded to her by Sonic Drive-In. This money is a portion of the $3 million donated to schools across the U.S. last year by Sonic.

McMillan said that students earn points for cleaning up after themselves and then doing extra things like helping other students who may be struggling.

“Sometimes students get to school early to tutor other students or even console other students that are having a bad day,” said McMillan. “We are trying to build a positive social environment with our students because there are new challenges brought on by the pandemic.”

McMillan said the Show Low school district has been conducting in-person instead of distance learning since last August. The students were very grateful to be with their friends but it’s not been easy this school year so teachers are willing to recognize and reward students who go above and beyond.

“I will tell you that we used this reward system at the junior high last year to reinforce respectful, responsible, kind and safe behavior in the students,” said McMillan. “Every week or every other week the students help go through and pull up the numbers and get it all ready. They are incredible appreciative for being rewarded for doing all of those things.”

“Sonic had a big part of this and people can still go on DonorsChoose to see what other teachers in the school are asking for,” said McMillan.

To see what other projects Show Low Junior High School teachers are working on through DonorsChoose.org, visit https://www.donorschoose.org/project/rewards-for-students/5267724/.

Thank you for the positive article. My grandchild has her as a teacher and we were talking about her the other night at dinner. It is wonderful to hear a 7th grade boy speak positively about a teacher!!