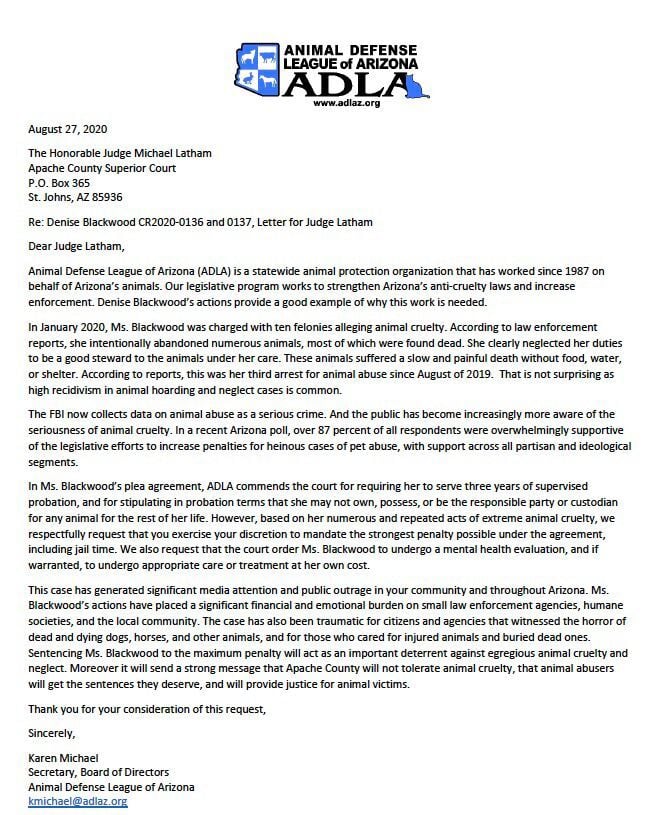 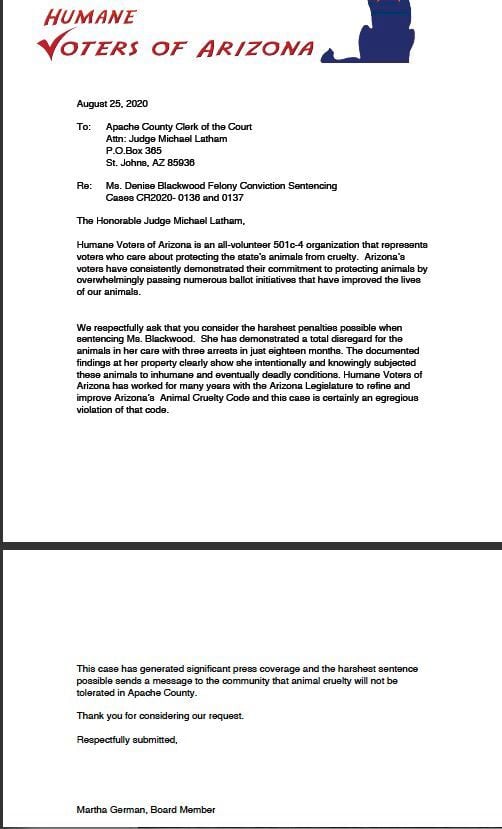 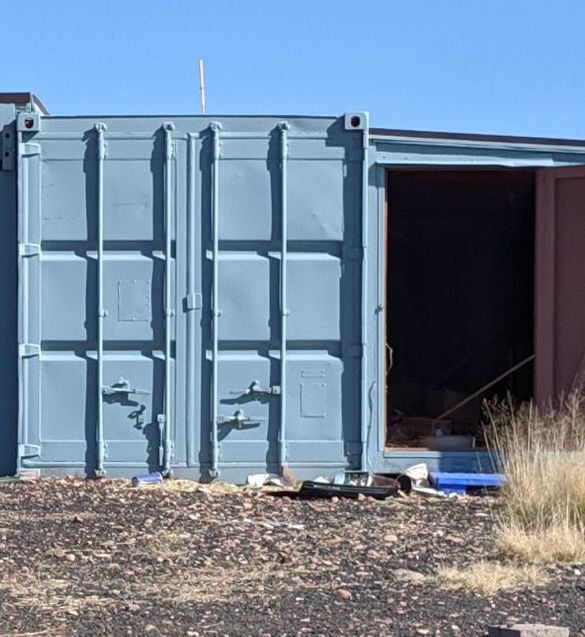 Pictured is the steel Conex container where the remains of multiple dead dogs were found by neighbors of Denise Blackwood in October 2019.

ST. JOHNS — The public tried, without success, to voice their concerns via letters and emails about what should happen to convicted animal abuser Denise Caroline Blackwood when she was sentenced on Monday, August 31. What seemed like a simple task — writing a letter to the Apache County court system became a debacle.

The voices of concerned citizens were unable to be seen or heard in person due to COVID-19 restrictions for in-person attendance. In lieu of this restriction, people wrote letters hoping it would make a difference when it came to Blackwood’s sentencing.

After following initial instructions given by the Clerk of the Court’s office, some letter-writers were instructed to send copies of the letter(s) to the group email and to copy defense attorney Bryce Hamblin and the Apache County Probation Department. The probation department is the one which writes a “presentence report” to give the sentencing judge details about the the defendant and the case in general.

With time running out and the date of sentencing quickly approaching, some drove to the courthouse to physically deliver their letters. They were told that the court could not take the letters and instructed to email them.

Some of the letters were never received by the intended recipients due to a litany of confusing and contradictory instructions. Addressing the issue at sentencing, Judge Michael Latham observed that the county attorney’s office, because that office “represents the people,” should consider the letters. To that, Prosecutor Garrett Whiting said that he received around “ten to twelve” letters and emails and that he read them all. Whiting stated that he believed that the unusual term of probation prohibiting Blackwood from having any animals for the rest of her life, adequately addressed the public’s concern. Not only that, he said, by having the plea agreement give the court wide latitude in determining Blackwood’s jail sentence also adequately addressed the public’s concern. It might by noted that Whiting “took no position” on whether Blackwood should get more jail time than the five days that she already served.

Then Latham addressed the letters issue as it applied to his office. The judge said that his staff received a number of letters, but he could not consider them under court ethical rules unless both sides in the case, namely the defense attorney and the prosecutor, had been given the same letters that the writers were asking the judge to consider.

The judge didn’t say, and probably didn’t know, how many letters or emails his staff had received for screening but Latham said said that the court’s “J.A.,” the judicial assistant, identified two letters which apparently met the ethical requirements. But the judge was sick on Monday, called in from home for the sentencing, and didn’t have the two letters with him. He remarked that he could read them when he got back to court, but that would mean that the sentencing would have to be re-set, again, and he wanted to hear what the defense thought about that.

The defense argued that there was nothing in the rules of criminal procedure which allowed a judge to consider for sentencing purposes letters like these, regardless if both sides saw them, because the writers were not “parties, victims or victim representatives,” said defense counsel Hamblin. Latham agreed and that was the end of that.

The whole process of letter writing in this case seemed to catch court administration unawares. For example, one letter was mailed to the clerk of court and a staff member stamped it in and stuck it in the court file. Hamblin moved that that letter be stricken from the file, and the judge so ordered that, for the above reasons.

At least 10 people including the Animal Defense League of Arizona and Humane Voters of Arizona wrote letters to the Apache County Superior Court. The letters all asked for the same thing — justice.

The justice they asked for was to sentence Blackwood with at least one year in jail and a substantial fine for her role in the unnecessary suffering of dogs, rabbits, goats, a horse and a cow in her care.

“Blackwood’s actions have placed a significant financial and emotional burden on small law enforcement agencies, human society and the local community,” stated the Animal Defense League of Arizona in their August 27 letter. “Sentencing Ms. Blackwood to the maximum penalty will act as an important deterrent against egregious animal cruelty and neglect.”

But the plea agreement offered to Blackwood was too little and too late.

Prosecuting defense attorney, Garrett Whiting, asked the court to consider the letters in lieu of the exceptional community outreach in the cases. His request was acknowledged but did not change the outcome.

The Independent spoke to several of the letter-writers and also received copies of the letters in the hopes their message would be shared.

Although Blackwood pleaded guilty to some charges, the lion’s share of the multiple felony counts were dismissed.

“The documented findings at her property clearly show she intentionally and knowingly subjected these animals to inhumane and eventually deadly conditions conditions,” stated the all-volunteer 501© 3 organization, Human Voters of Arizona (HVA) in their letter to Judge Michael Latham dated Aug. 25. “This case has generated significant press coverage and the harshest sentence possible sends a message to the community that animal cruelty will not be tolerated in Apache County.”

Other letter-writers who called were told they would be able to attend the sentencing hearing in person. One such individual, Kathleen Rae Mendes of Apache County, said she “attended all the court hearings from the beginning up to the point when spectators were no longer allowed due to COVID-19.”

“They had asked for input from the community (considering all the spectators that had been attending the hearings) so I contacted Garrett Whiting,” said Mendes. “I told him ‘yes’, I wanted to address the court. He told me that I could attend via the telephone or if I came in person and waited outside they would come and get me.”

“As I had feared would happen, they never called on me,” said Mendes who waited on the phone for over two hours. She also tried calling the clerk but only got voicemail.

“The message that has been sent to the community is very clear; there is no hope for justice,” said Mendes.

Although not all the letters were admitted to the case, some were acknowledge and discussed during the Aug. 31 sentencing.

Christine Griffin, president and manager of Equine WellBeing Rescue, Inc. sent a letter to Prosecuting Attorney Garrett Whiting and even though it was also addressed to Judge Latham, he did not get a copy.

“When asked by the judge at the hearing, Whiting mentioned receipt of many letters, emails and some phone calls, but specifically mentioned ours because we were speaking on behalf of the horse and cow that were victims of her felony neglect,” said Griffin. “The letter was not allowed by Judge Latham, but Mr. Whiting’s discussion of the letter, (and others), was allowed since he represents the State in the case.

Griffin’s letter stated that Blackwood “has clearly shown repeatedly that she has no respect for the lives of animals in her care. In her care many starved, were injured and further yet, died excruciating deaths either freezing...or of starvation and in the heat of closed, airtight storage containers...”

Griffin, on behalf of Equine WellBeing, asked the courts to consider Blackwood’s “habitual, long-term history of felony abuse and neglect of animals.”

That was the question. Now, it remains to be seen whether Blackwood will be able to meet the terms of her probation which include not owning or being responsible for animals during her lifetime.

"The message that has been sent to the community is very clear; there is no hope for justice. I am ashamed of the system here.

I am sick of the way prosecutor Whiting bungled this. It appears nothing more than just not putting in the work needed. She may not have a prior and thats because someone dropped the regarding previous abuse.

You need to be mindful of who you are voting into office. We have laws on the books that could have put her away much longer. The failure of the probation department to consider the fact that there were other animals that died due to her abuse and neglect. It is a serious pattern and she never even addressed it in court. Again without showing remorse, that should have been taken into account too. You all did your jobs poorly. If that was your best find another line of work.

While we are all sickened by the unnecessary suffering of these animals, the folks who submitted letters had no standing in the matter and the judge was right to strike them from the record.

As for the defendant's punishment, that's a debate for another news article.

I don't think the "relatives" of the victims have thumbs to write letters. So these humans were all they had to represent them