Requesting a C-1 rezone for the property known as Camp Tatiyee, the Lions Foundation of Arizona, Inc., posted a sign regarding such outside of the entry way to the camp. 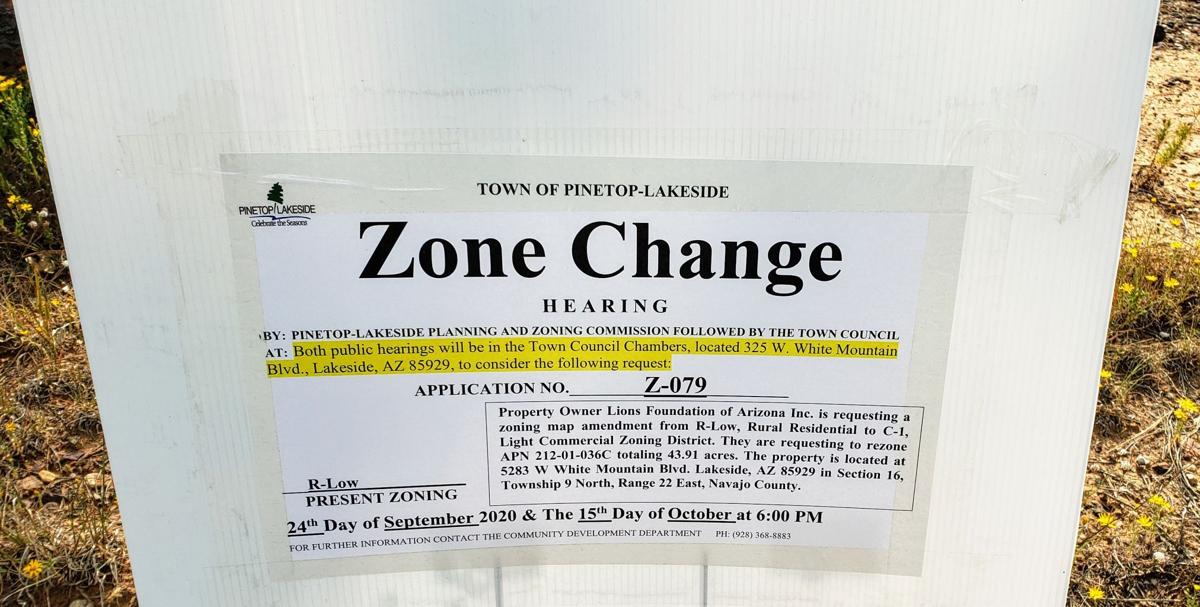 Zeroing in on the wording is the Zone Change Hearing notice posted outside of Camp Tatiyee on White Mountain Road.

Requesting a C-1 rezone for the property known as Camp Tatiyee, the Lions Foundation of Arizona, Inc., posted a sign regarding such outside of the entry way to the camp.

Zeroing in on the wording is the Zone Change Hearing notice posted outside of Camp Tatiyee on White Mountain Road.

PINETOP-LAKESIDE – The Planning and Zoning Commission will hold a public hearing on Thurs., Sept. 24 to consider a request by Lions Foundation of Arizona (LFA) to rezone the 43.91 acres known as Camp Tatiyee from R-Low, Rural Residential, to C-1, Light Commercial Zoning. This will be a surprise to many since for years it has been understood the property was Open Space (OS) zoning.

An opinion letter by Town Attorney William J. Sims III, dated Sept. 15, sheds new light on the status of the zoning of two parcels which, according to Town Code, fall under “Lands not Previously Zoned.”

According to interviews previously conducted by the Independent with LFA in 2007 and 2018 regarding what is commonly known as the Camp Tatiyee Land Exchange, LFA did not want to lose the land to developers and formed the Tatiyee Land Campaign (TLC) in 1997 and began a $3 million fundraising effort. They worked with Page Land and Cattle Co. to obtain sufficient land that the Forest Service wanted and accumulated 14 separate tracts which totaled 11,719 acres of different forest lands the Forest Service was interested in.

Over the 20 years it took to complete the exchange, changes occurred within the Forest Service exchange system and the appraised value of the 344 acres went up by almost 200%. Not able to come up with that kind of an increase, LFA sought a financial joint venture partner which was Brett Cote, BC2, LLC.

The exchange process was extensive. The lands to be exchanged, which had been purchased by LFA and BC2, involved 18 private land parcels across eight different counties in the state. This required coordination and approval to be obtained from different counties, municipalities and private citizens. Eleven different federal acts also had to be addressed which included the Endangered Species Act, Environment Policy Acts as well as others.

An additional consideration involved in the exchange was the Mogollon Rim Trail, used by many on the Mountain, which was transferred to non-federal ownership with maintenance and upkeep becoming the responsibility of the Lion’s Club.

Though LFA owns the 43.19 acres requesting a zone change on Sept. 24, the balance of the acreage belongs to BC2.

When a request was made in September 2019 by BC2 to change 25.5 acres of the original 344 from OS to Recreational Vehicle Park (RVP), the request was approved by the town council on June 18. Following that approval, a Petition for Referendum was filed by the Citizens for Quality Development whose goal was to take the decision direct to the voters. Many said they wanted to keep the OS zoning and objected to an RV park.

When Town Manager Keith Johnson told Cote, BC2, that it was likely a referendum would occur, he said Cote requested a repeal of the zoning. The repeal was approved on Aug. 20. It was assumed the zoning of the 25.5 acres would revert back to OS.

According to Town Manager Keith Johnson, when the town was incorporated in 1984, it looked at the zoning applied by the county and compared it to the town’s zoning codes. They matched the zoning of the town properties as closely as possible with those the county had designated.

Community Development Director Cody Blake had explained the OS designation in detail at the June 18 council meeting saying that the town had assigned OS to Forest Service land and that the only other way anyone could have that designation was if the property owner requested it in writing.

Following the repeal of the 25.5 acres, the town began extensive research into past zoning and it appeared the OS designation was incorrect.

Johnson said they asked the town attorney to render an opinion on the the two subject parcels. The attorney's letter, submitted for the Planning and Zoning meeting, says the town failed to comply with the Town Code and the correct zoning is R-Low. BC2 did not request an OS status.

The application for the Camp Tatiyee property, dated Aug. 20, the day of the repeal of the 25.5 acres, says they are seeking the C-1 zoning change so they can use the facilities for a “wide range of commercial purposes and to expand improvements.” They state that the current zoning only allows for disabled individuals with restrictions for an eight week camp.

C-1 zoning is quite comprehensive and is listed on the town’s website.

When a zoning request is made, the town is required to notify those within 300 feet of the proposed change. There are only three persons who are directly affected who have been notified - Brett Cote, BC2, Jennifer Brimhall of Camp Grace and Kirk Shurkins.

A number of persons who signed the referendum petition regarding the 25.5 acres, along with some of those living outside the town limits who have become aware of the zoning request change for Tatiyee, now have questions regarding the status of the other acreage owned by Cote, BC2.

The public hearing is regarding Camp Tatiyee's zone change request only and will be in the council chambers at 6 p.m. The meeting will be limited to 24 persons due to COVID-19. Masks will be required and the doors will open at 5:30 p.m.

“The failure of the Town to obtain such consent renders the attempted April 2, 2002, rezoning of the Subject Property to Open Space/Park ineffective and causes the property to revert to the underlying R-Low zoning classification..."

- William J. Sims III, Attorney for the Town of Pinetop-Lakeside

PINETOP-LAKESIDE – Though there were seven items of business on the Aug. 20 council agenda, many of the people in attendance, as well as those…