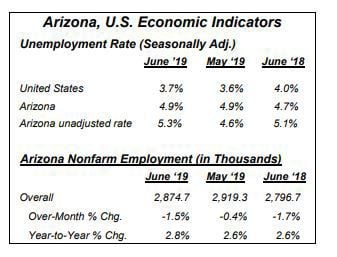 NAVAJO & APACHE COUNTIES — The unemployment rate in both Navajo and Apache counties jumped in June to a daunting 11 percent in Apache County and a still-worrisome 8.1 percent in Navajo County.

Statewide, only Yuma County fared worse, with a stunning rate of 19 percent years into an economic recovery that has pushed unemployment to historic lows nationally.

Apache and Navajo counties suffer roughly double the jobless rate as the rest of the state. The June statewide rate averaged 4.9 percent and the national rate averaged 3.7 percent.

Some analysts pointed to the steady gain in jobs statewide as evidence that the voter-mandated increase in the state’s minimum wage from $8-an-hour in 2016 to $11 now hasn’t slowed job growth in the affected industries, as the opponents of the measure predicted.

“What we’ve seen with Arizona’s minimum wage increase has been continued economic growth in a multitude of industries around the state,” Doug Walls told Capitol Media Services reporter Howard Fisher. Walls is director of labor market information for the Office of Economic Opportunity, which issued the June jobless report.

The state’s average hourly wage of $26.13 compares to the national average of $27.87. Nationally, the average wage has risen 4.2 percent, compared to just 2.6 percent in Arizona – despite the big minimum wage increase here.

The report also clearly documented the continued struggles of rural areas in Arizona – at least compared to Maricopa and Pima counties.

Only long-suffering Yuma County fared worse than Apache and Navajo counties. The rate in Yuma has been stuck at 20 percent for most of the last year, although it topped 30 percent in the recession. Experts blame a large, seasonally-employed farm work force and high poverty rates in a county that consistently has some of the highest unemployment rates in the country.

Apache County’s rate in June rose to 11 percent, which compares to 9 percent in May and 10.6 percent a year ago.

Most rural counties are doing better than Apache and Navajo, but still have rates 20 or 30 percent higher than Maricopa County. Rural counties with unemployment rates of 6-7 percent include Gila, Cochise, Coconino, Graham, La Paz, Mohave, Pinal, Santa Cruz and Yavapai counties — with little progress in the past year.

The trend mirrors the national situation, with job growth concentrated in dense urban areas as rural areas get left behind.

But then, everyone’s still doing way better than they did in the aftermath of the recession.

The low rate statewide comes coupled with a healthy growth in the number of jobs. So you can have more people working and still have the rate go up, based on what percentage of folks looking for work actually land a job. A booming economy draws people into the workforce who have been sitting on the sidelines.

Moreover, the jobless rate normally rises in June, when school lets out and the job bases makes seasonal shifts. Statewide, the unemployed rate went from 4.6 percent in June to 5.3 percent in June.

Statewide, the labor force increased by more than 10,000 in June – bringing the increase for the past 12 months to about 93,000. This kept Arizona in the forefront of job growth nationally, according to a report issued by the federal Office of Economic Opportunity.

Statewide, the job growth in the past year has been centered in education, health services, construction, professional and business services, trade, transportation, utilities, manufacturing and hospitality. The only sector losing jobs was government.

Apache County’s workforce has remained pretty consistent, gaining 500 workers from May to June and topping out at 20,900. However, the jobless rate rose 2 percent thanks to the 500-person rise in the number of people looking for work, bringing the total number of unemployed to 2,324.

Navajo County in June had 41,795 people in the workforce – roughly twice as many as Gila or Apache counties. Navajo County also has twice the Gila County population.

Peter Aleshire covers county government for the Independent. He is the former editor of the Payson Roundup. Reach him at paleshire@payson.com

Peter Aleshire covers county government for the Independent. He is the former editor of the Payson Roundup. Reach him at paleshire@payson.com