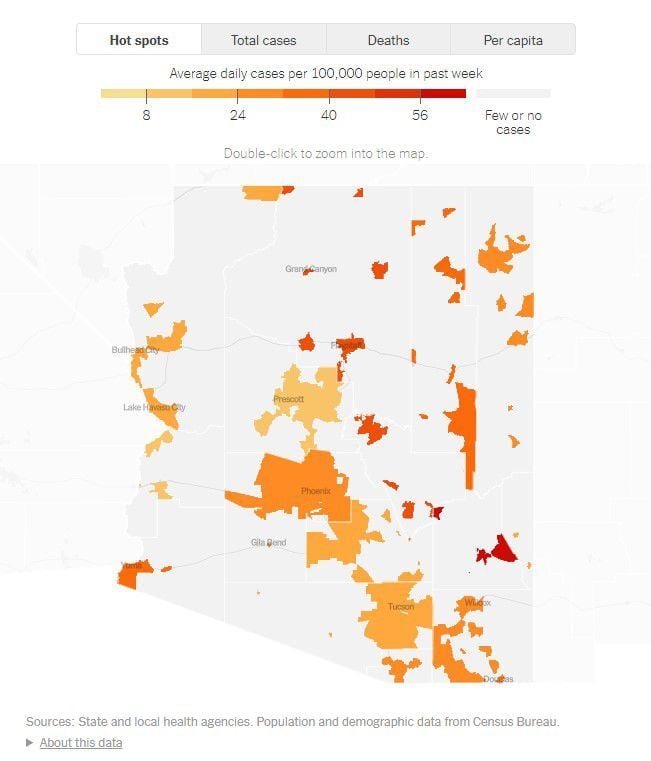 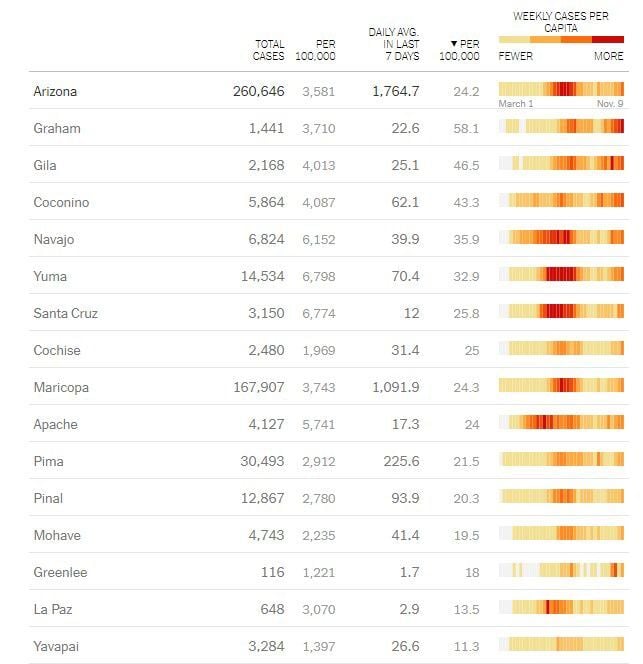 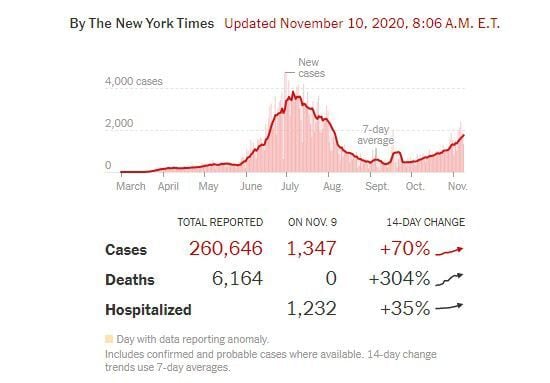 Navajo County health officials this week once again urged the public to wear masks and socially distance to slow a fresh surge of the pandemic that will otherwise again close schools and businesses before a vaccine can finally contain the scourge.

Public Health Director Jeff Lee on Tuesday offered the Board of Supervisors a grim report on the most gathering pandemic storm clouds — but also portrayed news about an effective vaccine as the life-saving silver lining.

“Unfortunately, I don’t have any good news to report” on the spread of the virus. “The risk of exposure in Navajo County is extremely high — and we continue to see a significant rise,” said Lee.

However, he also said news this week from the most advanced COVID-19 vaccine trial offers solid encouragement. Some 44,000 people have enrolled in a Phase III trial of the vaccine produced by Pfizer. The preliminary results suggest the vaccine is 90% effective in preventing an infection with no serious side effects so far.

“We still don’t have a solid date when we will see a vaccine in our area, but we’re planning as soon as December. When the vaccine does become available, we will be able to get it out,” said Lee.

The Navajo Nation has gone back into lockdown, several school districts have reported classes and Navajo and Apache counties no longer meet all three school benchmarks for in-person classes — or even hybrid classes in some cases.

Lee warned that schools and businesses might have to close once again if people don’t start wearing masks, practicing social distancing, staying home when they feel ill and avoiding crowds.

“Back in June and July and early August where we saw a significant rise, we did a great job in slowing the spread,” said Lee. “We can do it again. We must all do better at following the CDC recommendations in wearing masks, staying home, avoiding large gatherings, staying home when you feel sick, hand washing, coughing into a tissue, and routinely disinfecting surfaces. We are trending in the wrong direction. If we continue on this path, in just a few short weeks we’ll be back in the red zone — schools will be faced with decisions about whether to continue in person learning, businesses will face the threat of executive orders.”

Only public cooperation will slow the virus and allow the economy to recover in the months before we have a safe and effective vaccine,” he said.

It’s possible high-risk groups like perhaps nursing home residents and medical workers will have access to the vaccine before the end of the year. But the drug companies probably won’t produce enough vaccines for widespread use until well into next year.

Pfizer and the German drugmaker BioNTech have released only sketchy details on the Phase II trial of the two-dose vaccine. The company has estimated it can manufacture 15 or 20 million doses by the end of the year — far fewer doses than needed to significantly slow the spread of the virus in a nation of 320 million.

The results came in a press release, not a peer-reviewed medical journal — so outside experts remain optimistic but cautious.

So far, the Pfizer trial has revealed no serious side effects — but the results are preliminary. No one knows so far whether the vaccine will give lasting protection like the measles vaccine or require another shot every year, as is the case with the flu virus. So far, the COVID-19 virus appears to change its outer protein coat much less quickly than the flu virus, raising hopes it will confer lasting immunity.

Eleven vaccines are in late-stage trials in the US. The Pfizer vaccine relies on prompting cells to make a fragment of viral RNA. The shot prompts muscle cells to take up the injected viral RNA and begin producing a protein found on the surface of the virus. This arms the immune system against a later infection by the actual virus. The technology is more complex, untested and hard to package and distribute than traditional vaccine approaches. However, the messenger RNA vaccine may also stimulate a more robust immune response and have fewer potential side effects. Another vaccine in late Phase III trials — this one by Moderna — uses a similar technology.

Multiple companies will likely get authorization to market a vaccine in coming months, with each able to serve only a fraction of the world-wide market – at least in the short term. Russia is already distributing a vaccine, after skipping Phase III safety and efficacy trials. China is also close to deploying a vaccine.

The US Government as part of Operation Warp Speed has helped finance some of the research – although not Pfizer’s. The government has also promised to buy 100 million doses of vaccines that prove safe and effective, which the government would then distribute for free.

Some 44,000 people in three countries have volunteered for the Phase II trial of the RNA Pfizer vaccine. Half get the vaccine and half get a placebo, allowing the researchers to determine if the shot offers protection from the virus. A total of 94 people in the trial have become infected with COVID-19, presumably mostly those receiving the placebo. The drug maker is continuing the trial and needs to have another 164 cases develop among participants — hopefully the people taking th e placebo — to firm up the effectiveness data. The trial will also focus on whether people who get the two doses develop fewer symptoms in the event they do get infected. Many vaccines for other viruses reduce both the odds of infection and the severity of disease.

Other vaccines may also prove effective and easier to store and administer. Some of the vaccines nearing the end of Phase III trials require a single dose and don’t have to be kept as cold as the Pfizer RNA vaccine before it’s administered.

Supervisor Lee Jack asked, “how much do we trust this vaccine? Is it going to be safe? Is there something that we should know? I’m pretty sure people will be hesitant to try it out — might be some side effects from it. It’s pretty good news, though. Hopefully, everything will come back to normal in a year.”

Lee said, “the safety of the vaccine is one of the number one priorities of the trial. As it gets closer to the vaccine becoming available to the public, we’ll see the data sheets on all the effects.”

In the meantime, the supervisors appealed to the public to wear masks, avoid crowds, socially distance and don’t go to work if you feel ill.

“Each one of us knows somebody very close to us that has been impacted by the virus,” said Supervisor Jesse Thompson, whose district includes a big portion of the Navajo Reservation. “It’s really painful to see people we care about going through that. Every day we think of these people. Now it’s really up to us. We have to be responsible.”