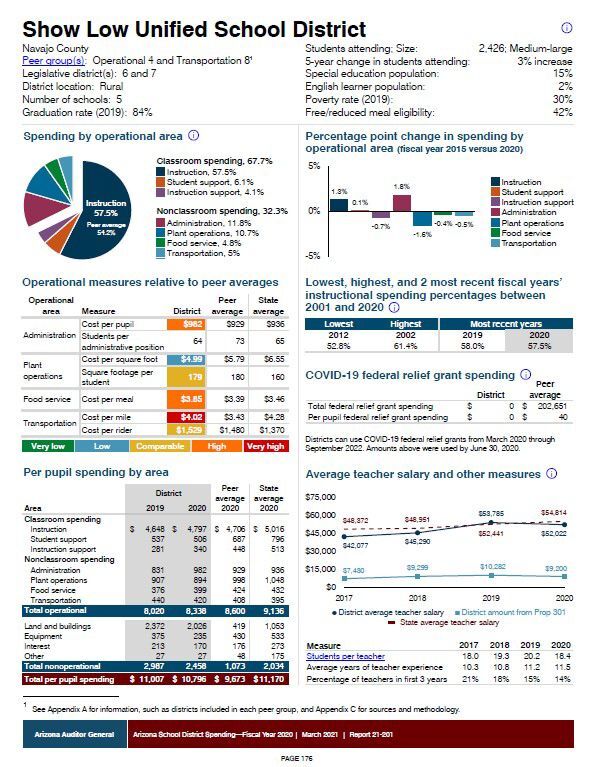 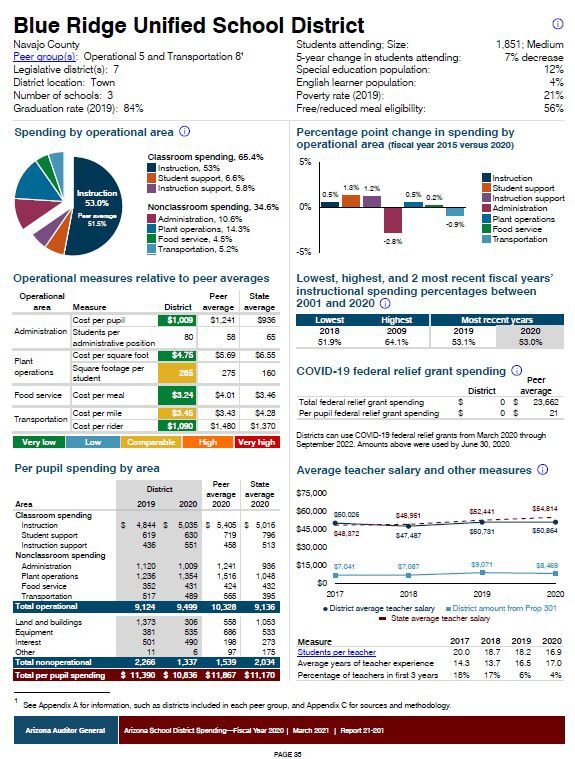 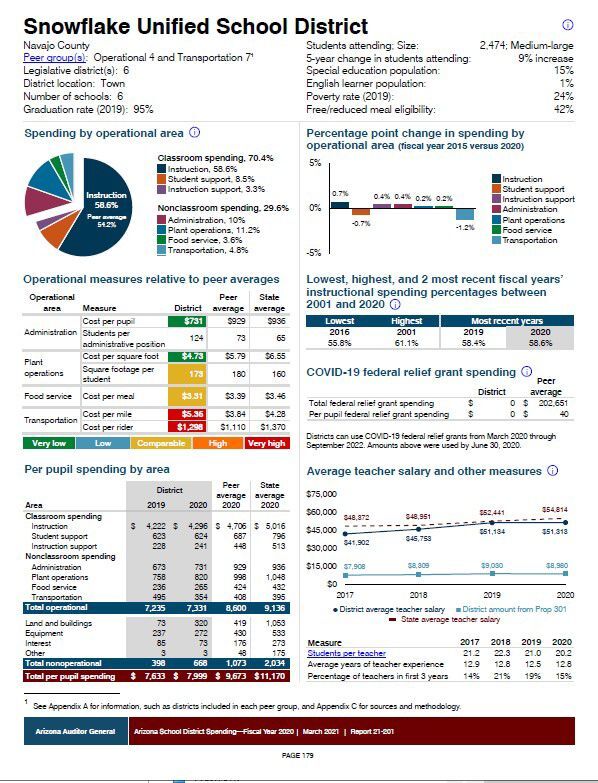 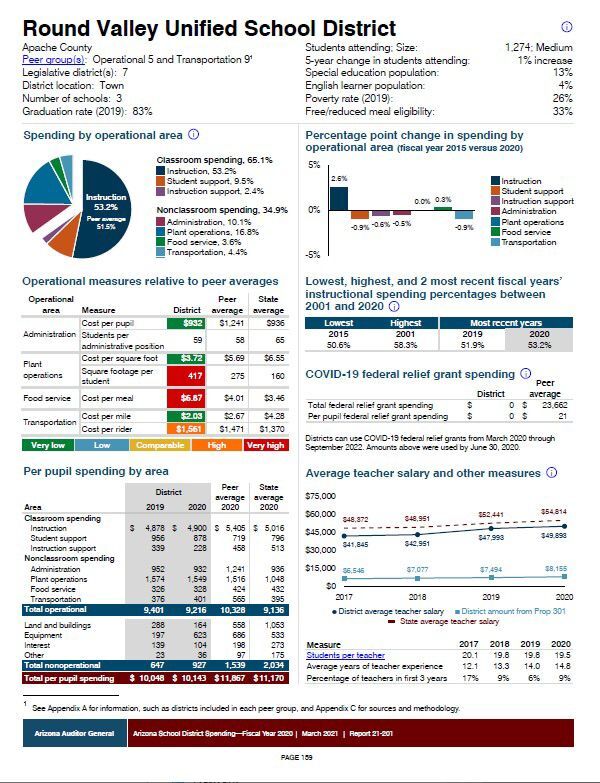 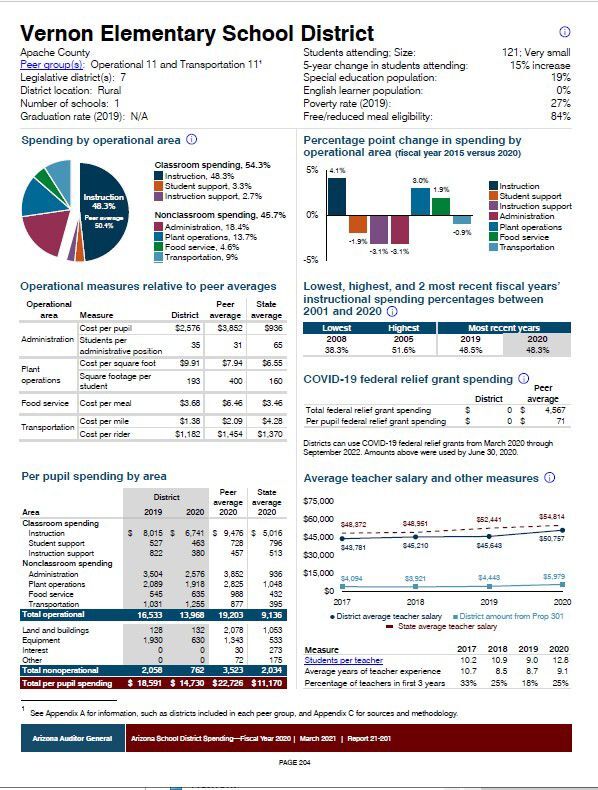 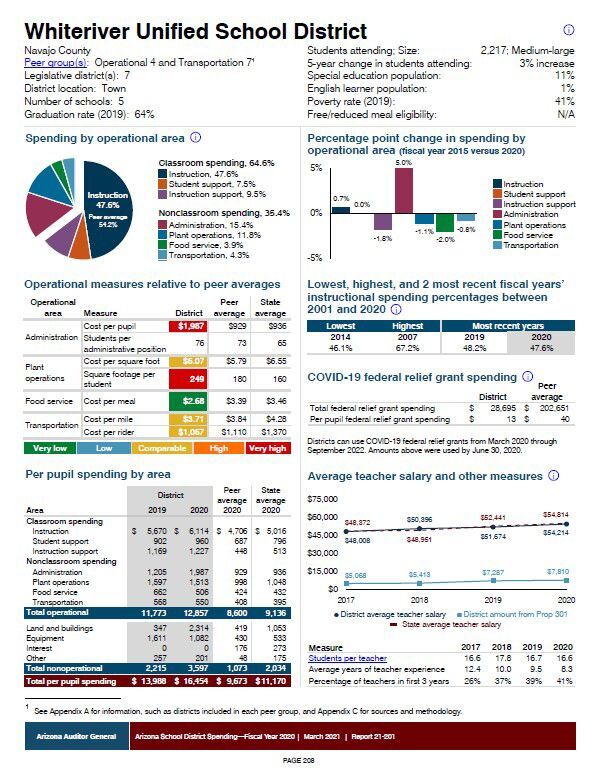 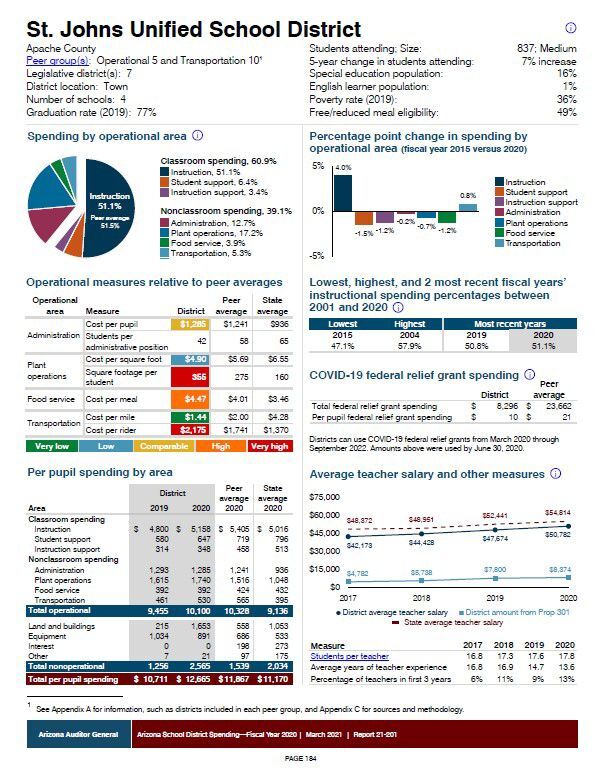 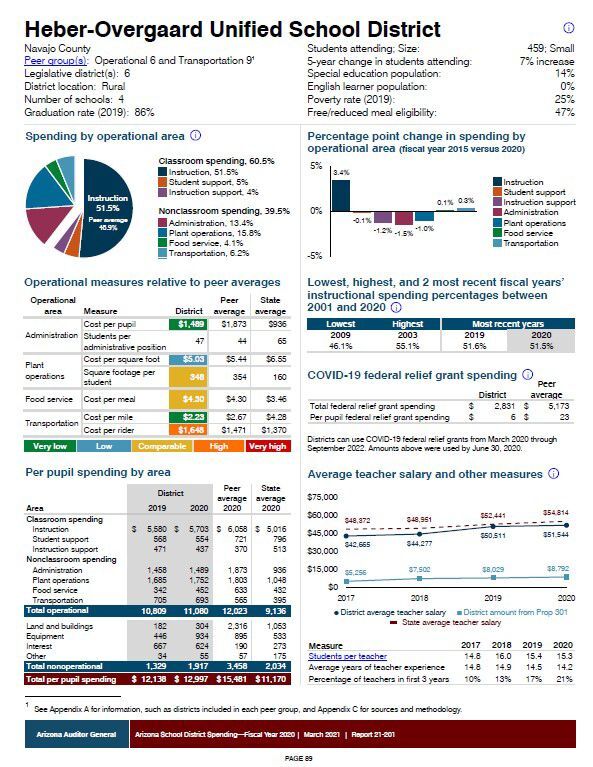 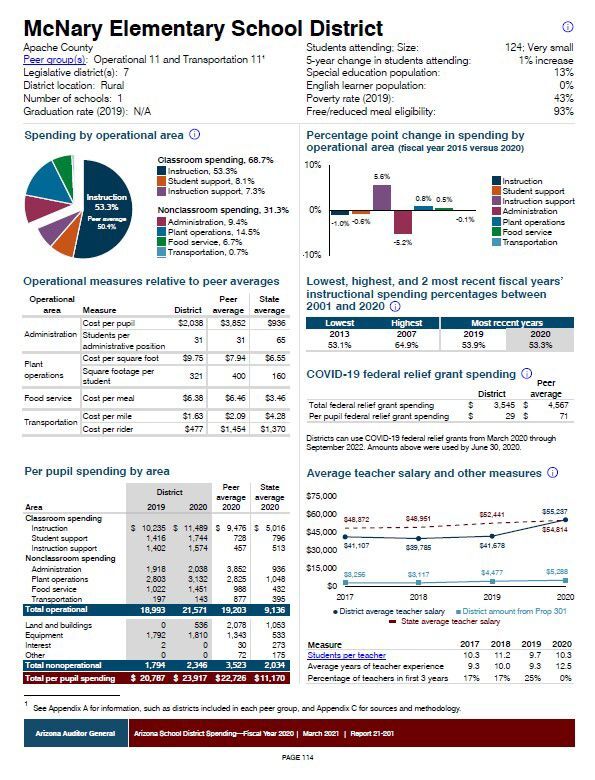 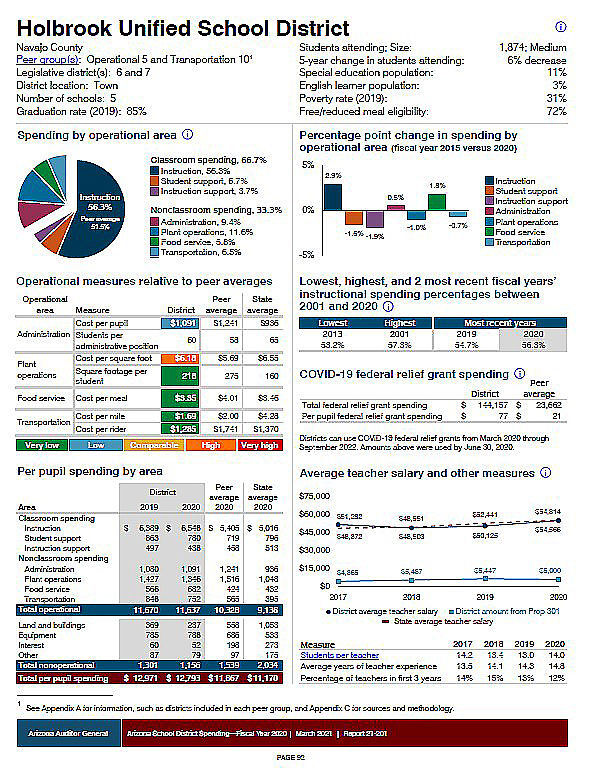 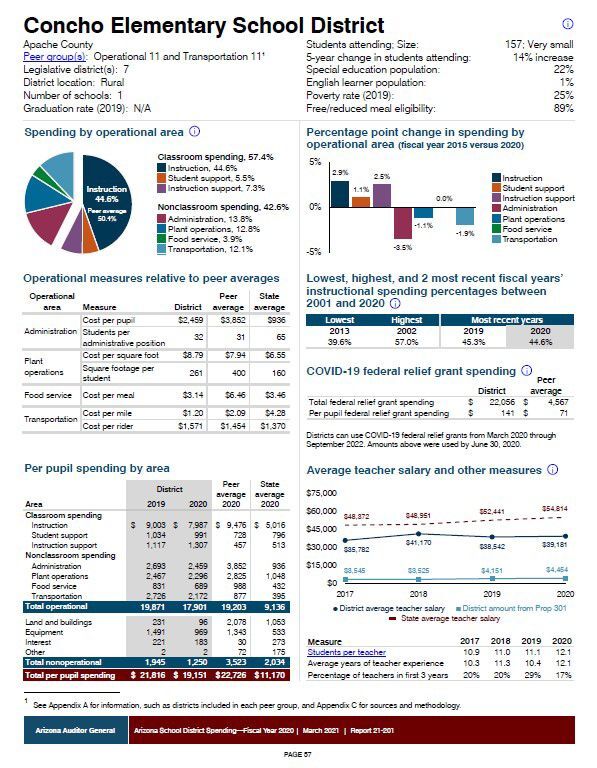 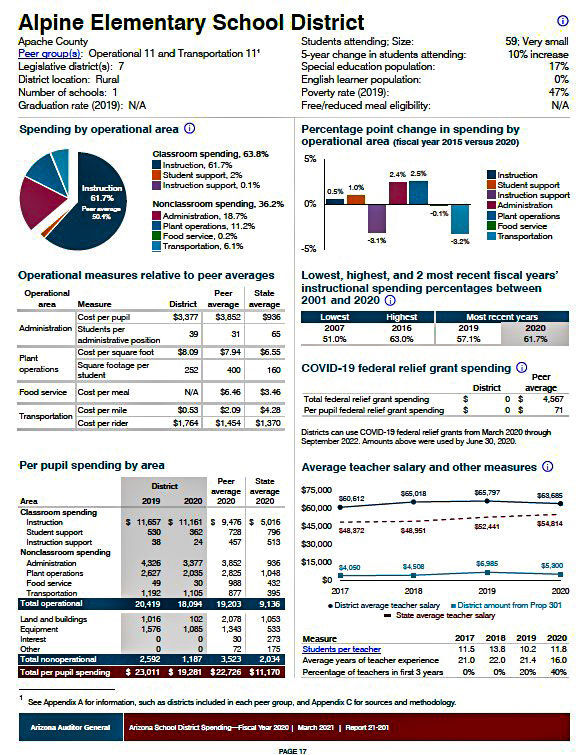 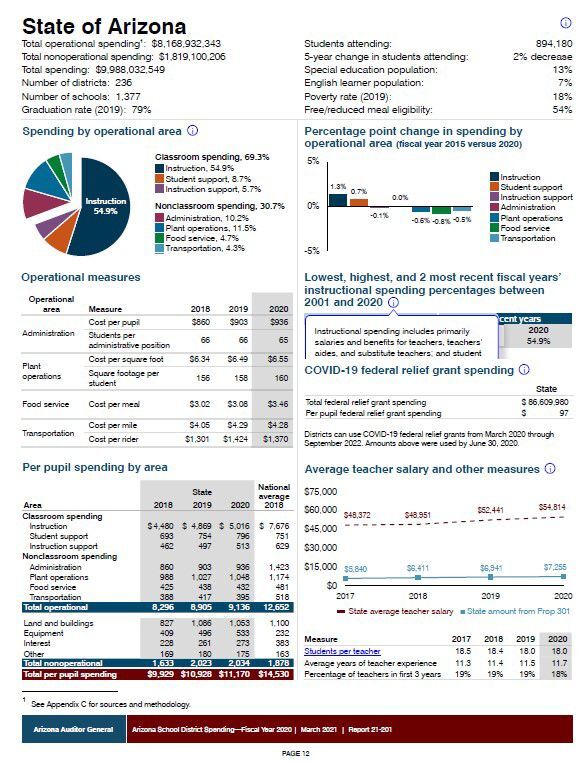 But Snowflake boasts a graduation rate of 92% — one of the highest in the state where the average works out to 79%. Better yet — from the auditor general’s point of view — Snowflake spends 70% of its budget on the classroom — just above the statewide average.

So does that prove Snowflake’s just much better with spending money and managing its schools? Not necessarily. Repeated studies show that poverty rates, family patterns, educational levels of parents, community support for schools and other factors have more to do with things like graduation rates and test scores than per-student spending levels.

Still, the just released auditor general’s report does offer some intriguing comparisons between school districts — despite the weird distortions caused by the pandemic in 2020. The sudden shift in and out of distance learning, the influx of a billion dollars in federal aid for schools, the lack of standardized testing and a host of other things make it hard to compare this year’s figures to last year’s.

However, the annual report once again demonstrates the vast difference in per-student spending levels between school districts in a state that still has one of the worst-funded public school systems in the country. Despite recent increases in teacher salaries, Arizona still has among the lowest salaries and largest class sizes in the country.

Many of the big variations between school districts in Apache and Navajo counties stem from school size. Generally schools with fewer than 150 student spend two or three times as much per student as larger districts. Districts with a relative handful of students still need administrators, buses, school buildings, a gym and other infrastructure — but can spread the cost out amongst far fewer students. The state recognized this reality with a school funding formula that’s far more generous for tiny schools than for the average school.

The Auditor General’s report remains focused on trying to compare district’s “instructional” costs with “operational costs,” to prod districts to spend more money on “classroom spending” than on “non-classroom spending.” Districts have long disputed the formulas, saying that things like administration, plant operations, food service and transportation are all essential supports for classroom spending.

For 2020, the auditor general categorized 69% as “classroom spending” out of the roughly $10 billion spent by 1,377 schools with 894,000 students. In the past five years, the number of students in Arizona’s public schools has declined by 2%, despite a rise in the state’s population. Enrollment this year dropped by more than 50,000, although the pandemic probably played a large role in that decline. The report this year didn’t compare school test scores, since schools didn’t administer standardized tests in the spring or consistently in the fall. Many of the figures are also already out of date, given the big enrollment declines for the fall semester.

The report acknowledged the difficulty of comparing this year’s spending patterns to last year considering the impact of the enforced shift to distance learning during the pandemic. A massive infusion of federal money from the federal CARES Act and other shifts created a unique year for school spending patterns.

Nonetheless, the report provides lots of interesting comparisons between districts — especially how each district compared to similar schools in terms of enrollment and setting.

Most of the schools in the White Mountains spent just below the state average, but reported higher graduation rates. The relatively strong fiscal showing came despite poverty rates among the families of school-age children that remained a bit higher than the state average. By and large, White Mountain schools had only a few areas of high costs – often centered on transportation, due to the sprawling nature of the districts.

The many reservation districts in the two-county area faced more struggles, which likely reflects community issues, family poverty and other problems not necessarily under the control of the district.

Still, some of the surprising numbers emerged from a comparison of districts in Apache and Navajo Counties. Some of those surprises included:

• Show Low’s enrollment has risen 3% in the last five years, which doesn’t sound like much – but the enrollment in neighboring Blue Ridge dropped by 7%.

• Round Valley had a relatively low average teacher salary of $49,893 – even though it had amongst the highest average level of teacher experience in the region – an impressive 15 years.

• The 459-student Heber district spent a hefty $19,151 per student – but unlike many tiny districts– it has grown 7% in the past five years. The district boasts an 86% graduation rate – well above the state average.

• Vernon’s also unusual among the ranks of tiny districts. The 121-student district spent $14,730 per student and has enjoyed a 15% increase in enrollment in the past five years.

• The Concho School District has just 157 students and spent $19,151 per student. However, the district also has the lowest average teacher salaries in the region – just $39,181. That’s unexpected, since Concho teachers have an average of 12 years experience – a little more than the state average.

• By contrast, the 59-student Alpine district has the region’s highest average teacher salaries – nearly $64,000. That’s especially surprising because Alpine also has the largest percentage of teachers just entering the profession – 40% of the faculty. Of course, the district’s so small that just one or two teacher salaries can create a weird-looking average.

The auditor general’s report also highlighted budget areas in which districts were spending a lot more – or a lot less – than other comparable districts. Here are some of those fiscal red flags and financial accomplishments for some of the districts in Apache and Navajo Counties:

• Whiteriver: Very high costs for administration and plant operations, but low costs when it comes to food service.

• St. Johns: Very high per-student costs for transportation and plant operations — but low costs if you look the cost-per-mile expense of busing or the square foot cost of plant operations. That contradiction underscores to take the auditor general’s numbers with a grain of salt — maybe even a dash of salt.

• Snowflake: Very high costs for transportation but very low costs for administration and plant operations. The district had the lowest overall, per-student costs ($7,331) and has enjoyed a 90% enrollment increase in the past five years.

• Round Valley: Very high costs for meal service, but very low costs for administration and transportation.

• Heber: low costs for administration, transportation and plant operations — unusual for such a small district.

• Holbrook: Very low costs for just about everything, including administration, plant operations, meal service and transportation.

• Winslow: Very high costs for transportation and plant operations, based on the square footage of its buildings. However, the district had a low plant cost based on a per-student basis. The district also had low costs for administration.

So here’s how school districts stack up for key measurements in the latest auditor general report. To see the full report on each district, go look at the links to this story in our online publication at payson.com.