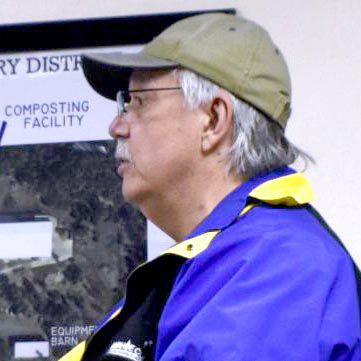 Bookending the Jan. 8 meeting with opening and closing comments as a ratepayer and key member of the Save Our Digester group, former PLSD District Manager Gary Atkin asked that the December meeting minutes be amended to include all 10 speakers and their comments; at the close of the meeting, with regard to putting the digester out to pasture, so-to-speak, Atkin said, “I can be convinced, but I am not convinced; mechanics and finances are big hurdles for me.”

PINETOP-LAKESIDE – With public concern over the fate of the digester at a fever pitch, the Pinetop-Lakeside Sanitary District (PLSD) decided to hold a January board meeting to offer people an opportunity to express concerns and discuss the issue and review the history of the costly piece of equipment.

According to District Manager Dave Smith, two board members approached him and requested the meeting be held because they did not want it to look like there was anything covered up.

Previously, no meeting had been planned because there were no business items on the agenda.

The controversy arose when the PLSD decided to purchase new equipment for use in composting wastewater sludge and paper, a process for which the $1.7 million rotary biomixer, called the digester, has been used for the past 16 years. Some residents are concerned that the town is not getting the full life and dollar value from the expensive equipment.

At the November board meeting an agenda item was the discussion and “…possible action regarding the Rotary Biomixer and the demolition of or possible sale of the equipment.”

The one big item on last week’s agenda that could potentially explain to everyone why the decision was made to replace the digester was — “History & update on compost facility,” but that item came after the call to public. If the call to the public had been moved to take place after the discussion of “History & use of compost facility,” many of the questions posed might not have been asked, or prompted different questions. When Leslee Wessel stepped up to speak, she actually asked the board if she could reserve her comments and questions until after that agenda item, and was told she could.

But prior to Wessel, questions surrounding information about composting, lack of information and concern over the ending of the digester’s use, and how the board arrived at their decision consumed the questions and comments.

Gary Atkin, a former PLSD district manager and member of the community group, Save Our Digester, was the first to speak. He began by thanking the board for “uncancelling the meeting.”

Atkin also asked that the minutes from the Dec. 11 meeting include everybody who came up and spoke at the call to public.

He went on to reveal that in his research, in the official records there are three different life expectancy periods for the digester: 25, 30 and 50 years.

For the purposes of his calculation, he used 25 years to demonstrate that with the cost of the digester at $1.7 million and 60 percent of its life used, the digester’s value is $680,000. He added that the discussion regarding the replacement of the digester revolved around the cost of replacing the wear bars at a cost of between $200,000 to $270,000. Atkin said the original supplier of the digester said he had not spoken with anyone from PLSD in years and wondered why, under the digester’s current use with cardboard and paper, they would think it necessary.

“It does not need wear bars,” Atkin said.

“What are we going to do with the machine if it is discontinued; there is no market for it and the price of steel is way down, making it six figures to discard which is unacceptable,” Atkin said. 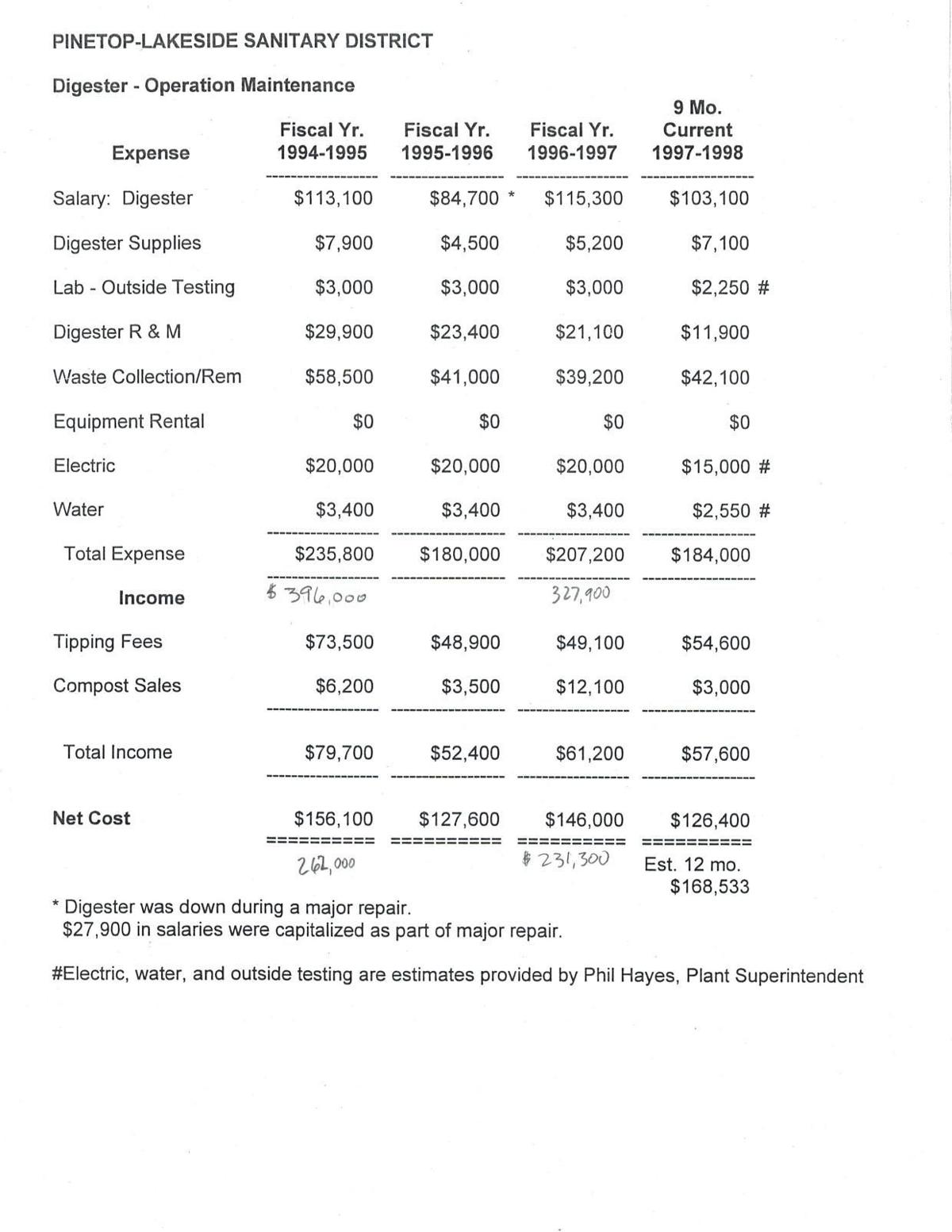 Following Atkin, nine other ratepayers came forward at call to the public with comments and questions, plus two PLSD employees.

As in the last meeting, communication or the lack of it, to ratepayers was a common thread, many suggesting a newsletter or some form of communication from the district regarding district plans and activities.

One of the two PLSD employees to speak was Jeff Ryan who has been with the district for 18 years. She works in treatment and composting. She said, “We will continue recycling. The digester does not suit our needs; never has. Using it 16 to 17 years has not been rainbows and butterflies, I’ll guarantee that. Recycle, yes, but there is a better way to do it.”

Employee Melissa Kenchiova said she had always been told that the life of the digester was 15 years, and she said she disagrees that the wear bars are not necessary.

Mark Wessel, a former PLSD board member who spoke at the call to the public, reminded everyone that “clean water is why we are in business.” He added that “having been there for financial decisions we do not take it lightly … give them the benefit of the doubt.”

Board member Chris Kengla reiterated that the board continues to recycle regardless of the cost because it is what the community wants.

Board member Paul Meier said, “If Dave had his way, we would haul it to the landfill,” which is what most wastewater treatment plants do.

District Manager David Smith said the board makes the decisions and it is his job to see that they are carried out.

Smith went over the Powerpoint presentation line by line explaining the history and then summed up the reasoning for the new equipment.

Atkin bookended the meeting, reminding the board of their investment in the digester, and suggesting the creation of an ad hoc committee.

Kengla commented that the board had a fiduciary duty in this matter, and Board Member Diana Butler suggested that other people could run for the board.

It was 1989 when discussion with Show Low, Town of Pinetop-Lakeside and the District began over concerns of the closure of the local landfill.

The other parties appeared to back out of plans and financial support, so the District made the decision to start accepting MSW and sue this material to mix with the sludge produced at the treatment plan to make compost.

The approval was given to purchase a digester (BioMixer)

The operations of the Digester would be covered by 1) charging tipping fees; revenues from the sale of compost; possibly raise user fees – there was no engineering study or cost analysis

Concerns about the condition of the original digester were discussed

Estimated cost for a replacement was given at $1.4 M

No discussion about other alternatives were given

Approval for purchase was given in December 2002

Reasons for the Digester

Reducing the trash going into the landfills

“The District was looking at having to transport sludge out of the area this was approximately 100K tons of sludge...”

Recent Board Meetings regarding composting/recycling

Need to be proactive

Options for other methods

Still accepting about 500 tons of cardboard and paper annually

Paper and cardboard will be accepted

Equipment change is meant to improve the process

Compost will still be available for purchase